In this project, we have used a hall sensor that is able to detect a magnet and also the pole of the magnet.

There are various sensors available in the market, but we have used a hall sensor magnet in this project which is able to detect a magnet and also the pole of the magnet.

As per law “when a conductor or semiconductor with current flowing in one direction was organized perpendicular to a magnetic field a voltage could be estimated at right angles to the current path”.

With the help of this technique, the hall sensor will be capable to recognize the appearance of the magnet around it. 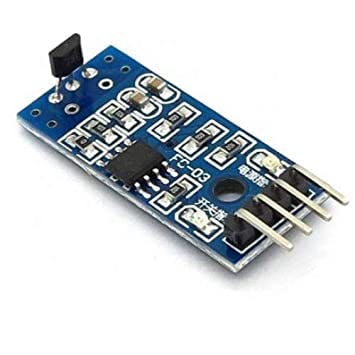 Once we upload the code to the Arduino. We have utilized a 9V battery to power the whole set-up you can utilize any preferable power source. Now take the magnet close to the sensor and your LED will shine and if you get it away it will turn off.

What really happens inside is, when we take the magnet close to the sensor modifies its state. This change is sensed by the interrupt pin which will ask the toggle function inside which we change the variable “state” from 0 to 1. Hence the LED will turn on.

Now, when we drive the magnet away from the sensor, again the output of the sensor will develop. This change is again mentioned by our interrupt statement and hence the variable “state” will be modified from 1 to 0. Thus the LED if Turned off. The same repeats every time you take a magnet close to the sensor.

The project describes how we can control home lights with the help of the touch sensor and Arduino.
Project Owner Contributor

In this project, we are using E18-D80NK IR Proximity Sensor which we will interface with Arduino.
Project Owner Contributor