How to create an IoT table light with Tuya

You will learn how to use the Tuya Smart system to connect all your devices to the internet.

You will learn how to use the Tuya Smart system to connect all your devices to the internet.

BONUS FUN FACT: Now you can be a part of the Arduino Beta Test Program with Tuya and win some really really exciting gifts worth $7.5 and even more if you provide your valuable feedback. Arduino Beta Test Invitation from Tuya with gifts（Get your Tuya Module for free)

The coupon can be used when select and order the modules.

Do you want to build a professional automation product? Do you want to offer a tool with greater ease of use for your customer? Want to have a tool that is easy to integrate into any technology with ESP8266? Do you want an app with a simple interface and a great experience for its user?

Did you know that most of your equipment can be controlled over the internet? Today, I'm sure most of the devices in your house are manually powered.

Implementing an automation system will provide you with comfort, reduced energy consumption, and financial savings.

There are several ways you can do this. Many people indicate that you implement your own system and develop your own control interface. But that's a big problem.

It's a big problem because you need to do a lot of things like:

It takes a lot to implement all these things. Unfortunately, we weren't able to implement it because it requires a large team of people working to create the entire automation and control system.

Now imagine the following situation. Imagine you have:

Is it possible to do that? Yes, that already exists. We are talking about the Tuya Smart Platform. Tuya Smart has developed a system to facilitate the connection of your devices to the internet.

In just a short time you are able to create the entire automation solution. All control is done by cell phone. The interface is nice, clean and pleasant. A complete solution for you to use Arduino and connect your devices to the internet.

Why does the Tuya Smart Platform work?

Tuya wants to facilitate and democratize the internet of things. She wants anyone to be able to create their own automation systems.

That's why their engineers have developed a firmware that can communicate with any device over the internet.

How to communicate between Tuya Platform and Arduino?

Tuya is a platform that is simple to use. It is a bridge between your control application and your hardware. You don't have to worry and develop a communication protocol. Tuya already offers the complete solution to your IoT problem.

The figure below shows the working structure of the Tuya Platform with Arduino. 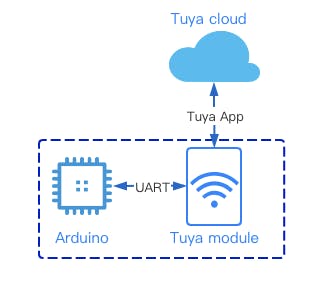 Tuya Platform has a mobile application that communicates with its server in the cloud. The user sends the commands and they are sent to the Tuya module. This module can be created through an ESP8266 WIFI. Tuya provides a firmware that turns your ESP8266 into a bridge between Tuya's server and your Arduino.

This is how you will learn to create this IoT luminaire with Tuya Smart. See the luminaire in the figure below. 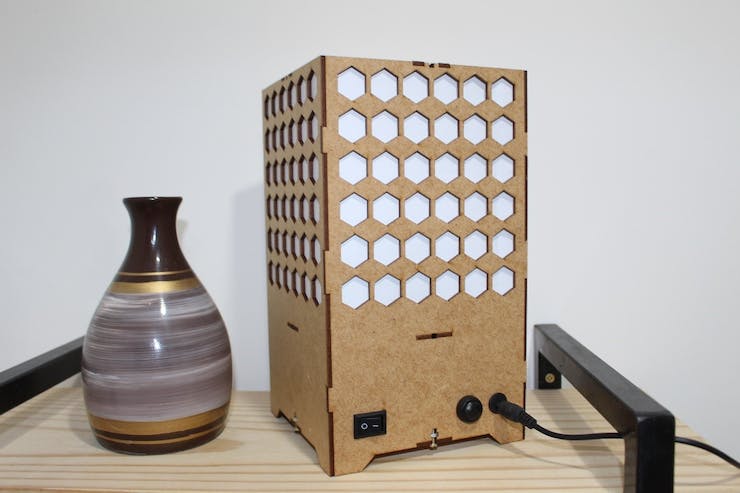 This system is simple and it works. See the control interface. It is a professional application designed to be easily used by any user.

In the images above you can see the two control states of our lamp in the luminaire. We have the lamp turned on and off by the user. See the light-activated in the figure below.

Note that the app's interface is beautiful and well-designed. You can register various types of devices in your App.

Okay, but how can we automate our luminaire with Arduino?...

The device that allows to turn on/off two pairs of the outlet sockets via Web browser through Wi-Fi. Based on ESP8266 and Arduino Mini.
Project Owner Contributor