A project log for Battery Supply for DSO138 portable Scope 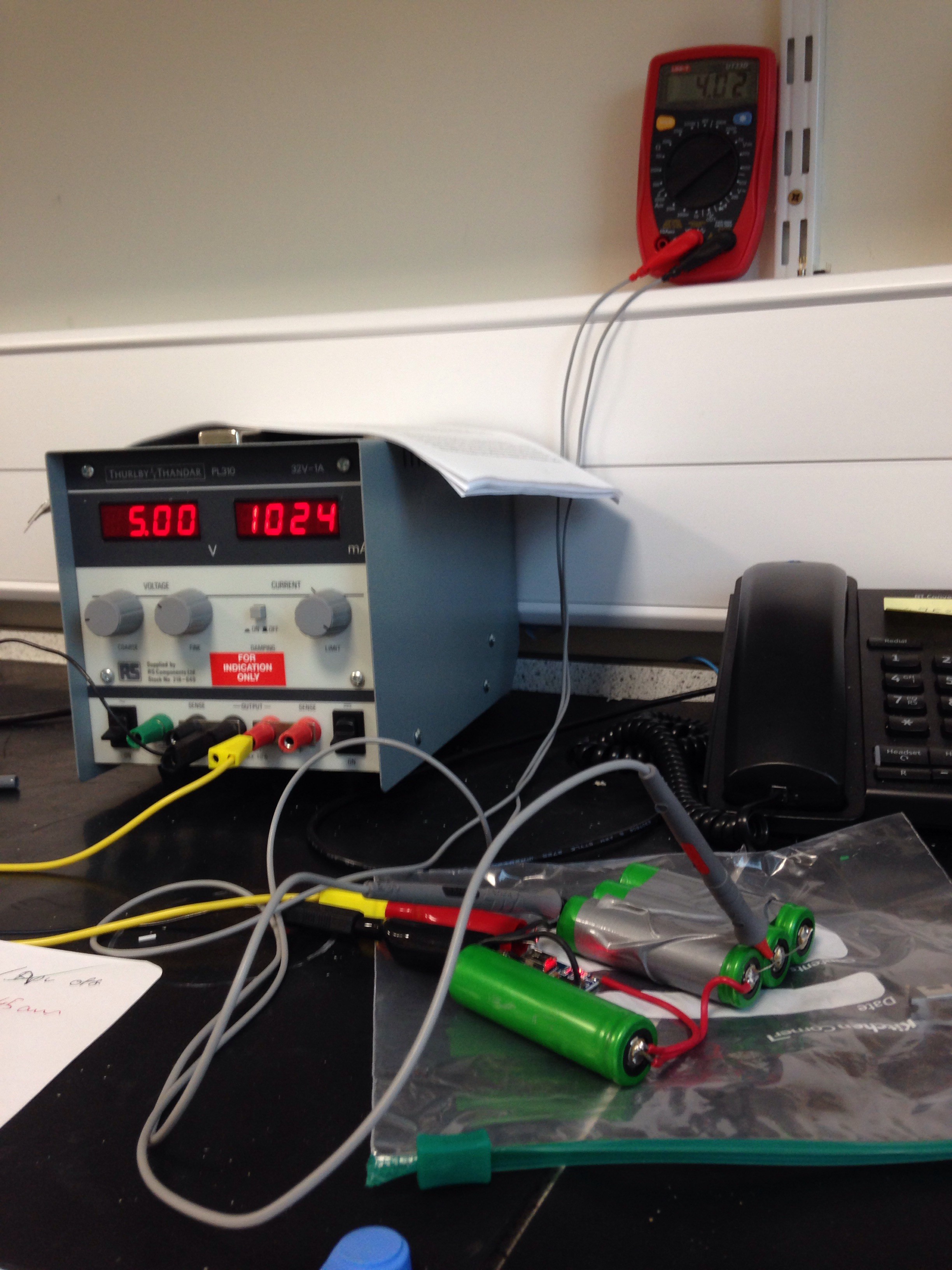 So this is the setup I used to charge my batteries whilst monitoring their progress. The aim is to verify that the batteries can reach a charge round about the 8800mAh. I am assuming that some residual charge would be left in from the previous nights test and from its previous life in a laptop.

So anything between 4000-7000mAh is acceptable. I know that's a wide range but I'm taking into account of worst case (1000mAh per cell) and best realistic case given the cells age plus residual charge left over (7000mAh).

So I began charging at 8:45am at work using a linear bench supply and a DMM and basically took values at random points in the day. The setup was next to my Laptop, so some values are quite frequent whilst I've been looking for parts or reading data and quickly glanced over and entered them in the spread sheet, and others are less frequent as I've had be called away. 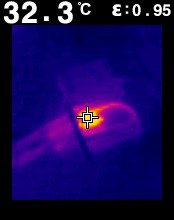 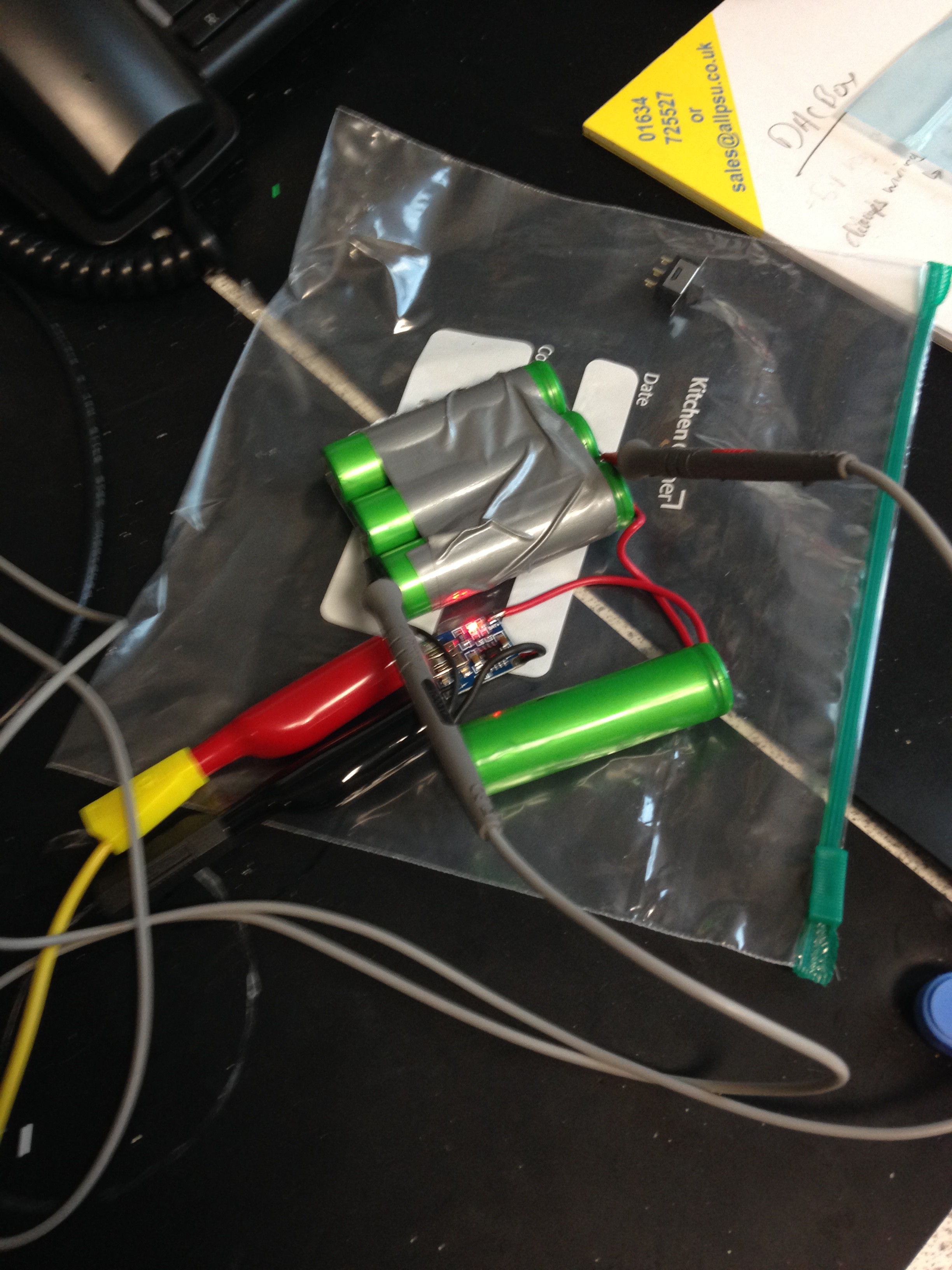 During a break I used work's FLIR handheld thermal camera to find out how hot the little charge board was getting. Not too hot. I also used the finger test and it seemed to be hotter than the FLIR was indicating. It was just bearable to touch, meaning it was just shy of 60 degrees Celsius. This is not a worry either, if it was any hotter I'd be considering a different type of charger (hobby charger maybe). 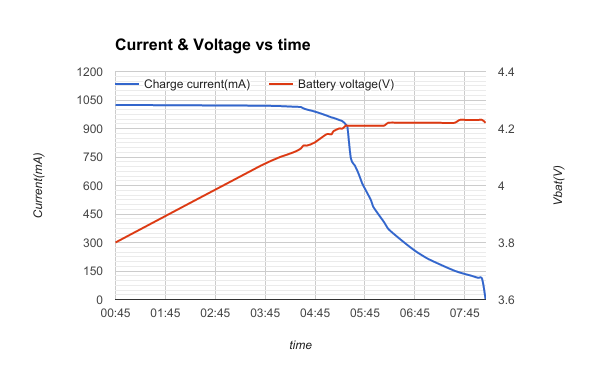 So After nearly 7 hours, I managed to obtain the above graph. As it can be seen, the battery voltage slowly rises to about 4.1V whilst the current remains constant at 1A-ish. It then slow reduces the current over the next 3 hours or so till it reduced to about 2mA, whilst the battery voltage didn't get above 4.3V. This proves the Charge board is working correctly to charge Li-Ion batteries - not that I ever doubted, but its a good idea to check to make sure you've not got a fake!

So to determine the rough capacity of the battery, I used the data from my spread sheet and did some rough integration using the Riemann Approximation with the current values and out popped a number: 5565mAh

This is bang where I expected it to be. So taking into account of some residual charge, a little charge from the previous test and the roughness of my calculations, I guesstimate the capacity to be in the ball park of 6000mAh. I will confirm this with a load test maybe, but to be honest that's plenty capacity for this application!