Modern robotics hardware for the hobby market has been reduced to a series of modules, from servos to processors. The only things connecting these together are wire and chassis, and I've been experimenting with using easy to obtain materials to build those chassis. Polycarbonate and polystyrene, polyethylene, sheet aluminium etc were natural choices.

Mark's IO made me think again about the validity of cardboard as a working material, and we began a dialogue that culminated in this collaboration.

The idea is to use a single sheet of craft card and a printed template to create chassis units that connect the electromechanical building blocks together. 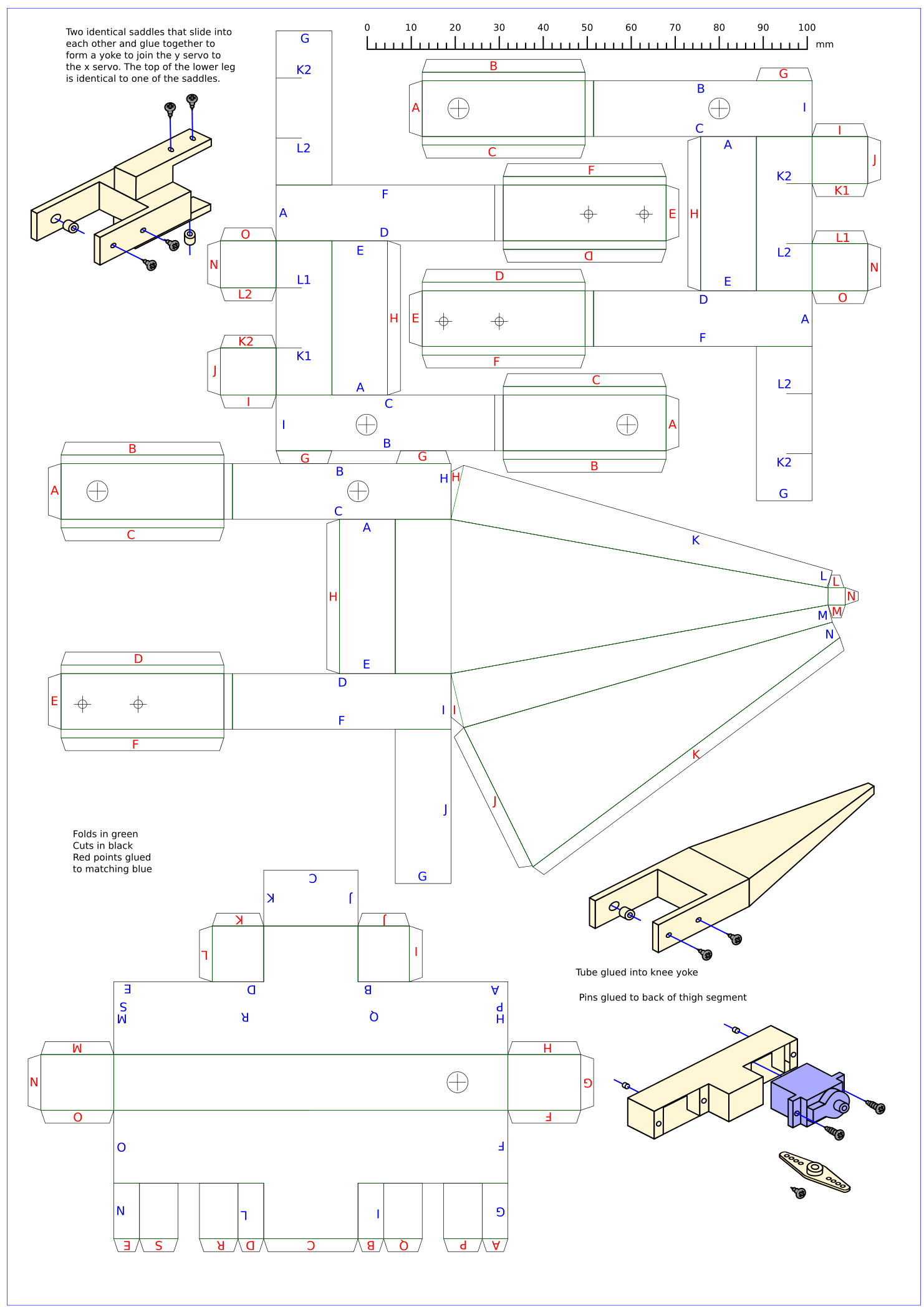 We have since iterated over a few changes to the design, incorporating better geometry to give the parts strength, room for cabling and better overall appearance.

The first generation limb mounted on a spare thigh section so I can test the servos... 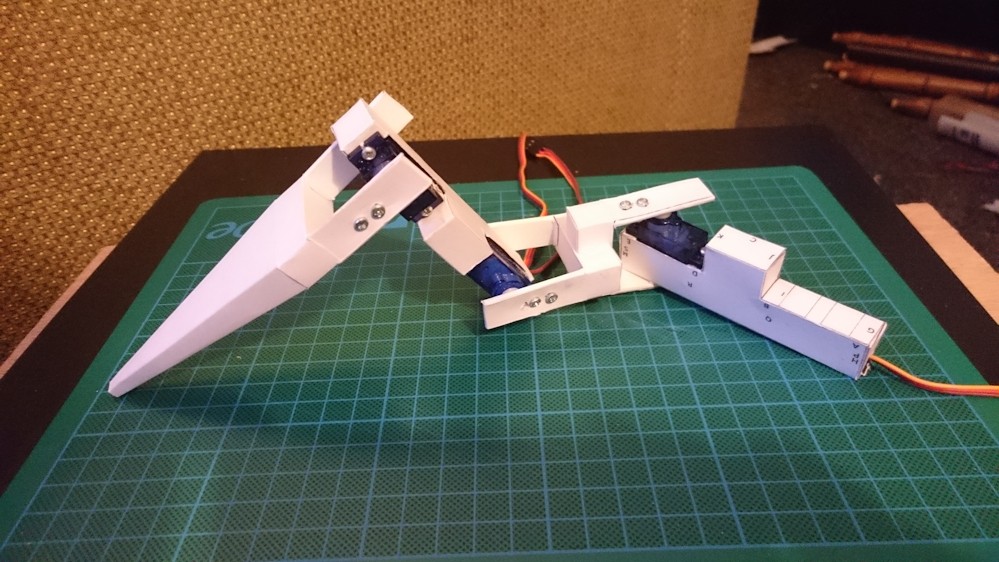 Mark Nesselhaus was able to replicate three of the pieces so far. If he can do it then anyone can. When using Super Glue please watch the fingers. Once we had a working prototype chassis, the next job was to get the nervous system up and running.

Mark is now waiting for his 'brain' and 'muscles' to arrive via the postage system (fingers crossed) so he can duplicate the next stage himself... This is the real meat of the project, and forms the interactive part of the cardboard. I'm working on internalising the touch panels for the 2nd generation shell.

The nervous system in action on a first gen limb,attached to my PC. I'd managed to get it working how it was intended - it mimics the biological hallmark of withdrawing from a stimulus, and learning from the experience.

If you watch carefully, you can see that the servos are live and are holding the limb in position until I touch a surface, which it then withdraws from by a short distance. The system will record these motions and tag them to a hierarchical structure so you can 'program' the robot by touch alone. This only requires an MCU, but we are also using a RasPi with a camera and microphone to detect motion and shapes and respond to voice commands.

Testing the system on a Pi revealed the touch panels to be a lot more sensitive, and the cardboard literally came alive. I'm working on a way to integrate both these behaviours into the system.

The new parts build in exactly the same way as the first set, they fold up from a single piece of cardboard to make a modular piece for the robot. Mark calls this Origaime, after the original robot that inspired everything and the art of folding. :-) Both these pieces were accomplished using the redesigned saddle that fits over the servo actuator and a stud fitted opposite it to make a live hinge. 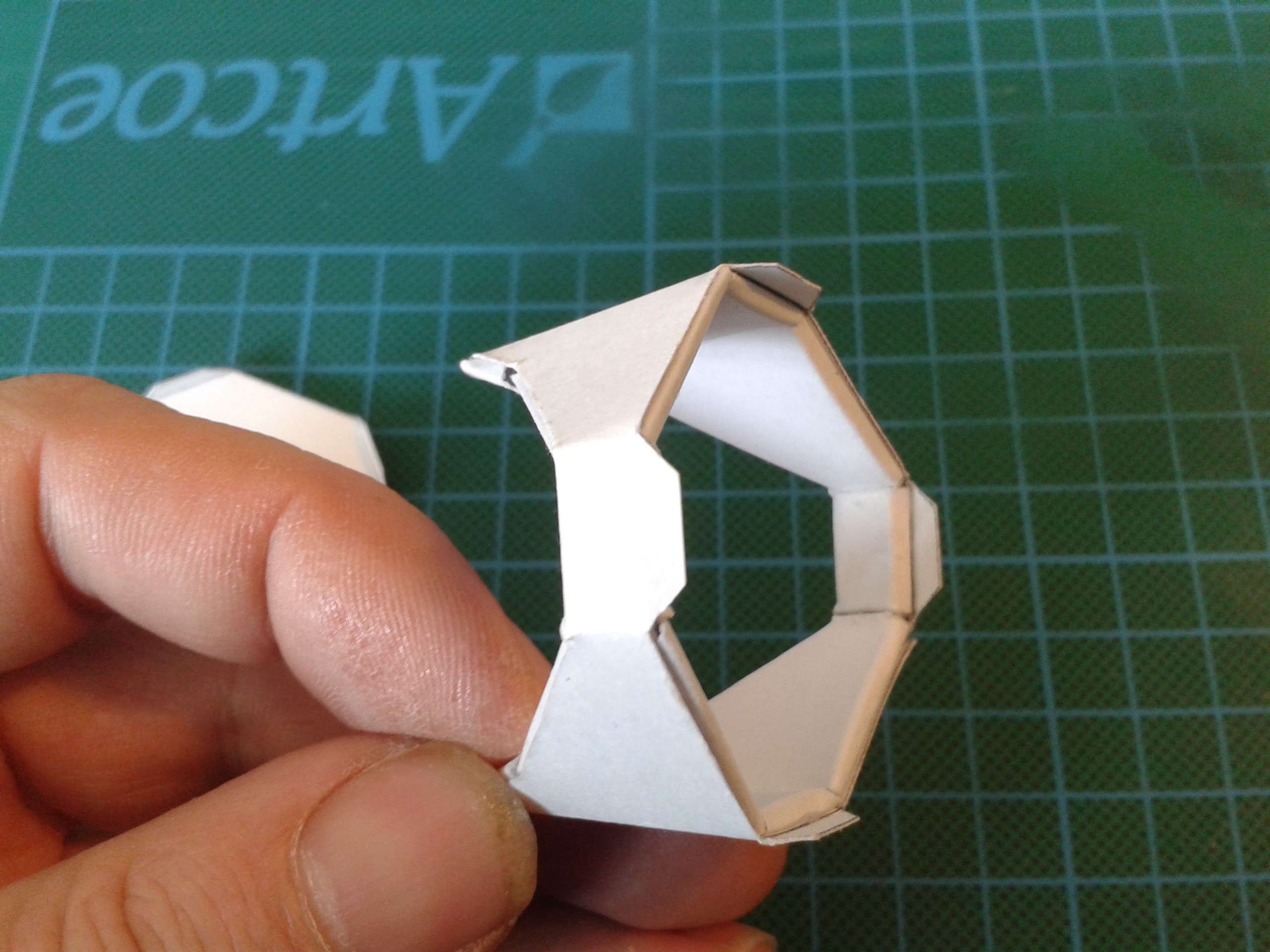 The section that joins these together to make active limbs as also made from one piece. This part carries the servos and the stud for the saddle to rotate over. Eventually there will be a range of part styles that can make any articulation you like, not just basic limbs. 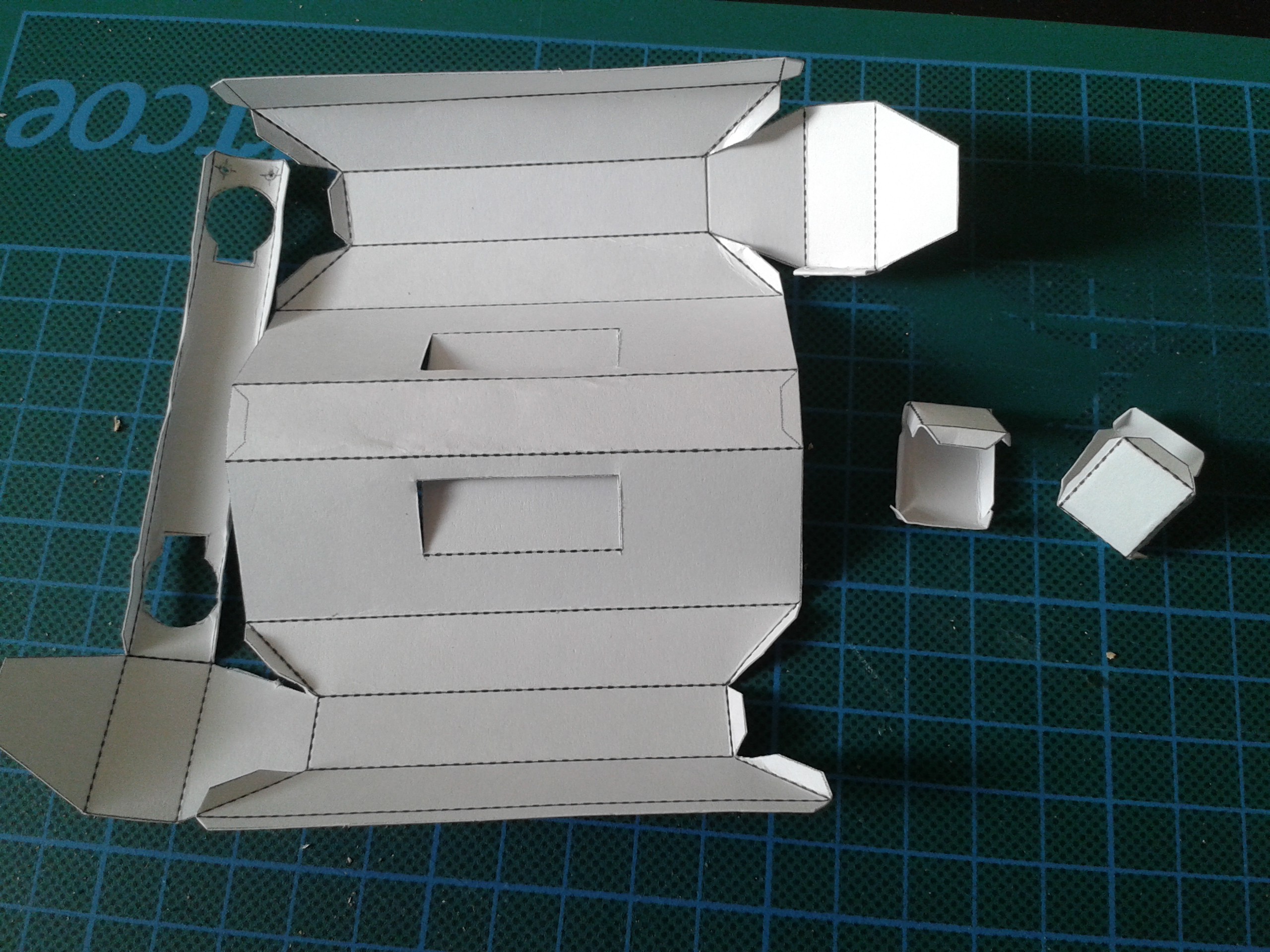 This has been reworked to include the servo bearers out of the chassis instead of separate pieces. This better fits the Way of Origaime... 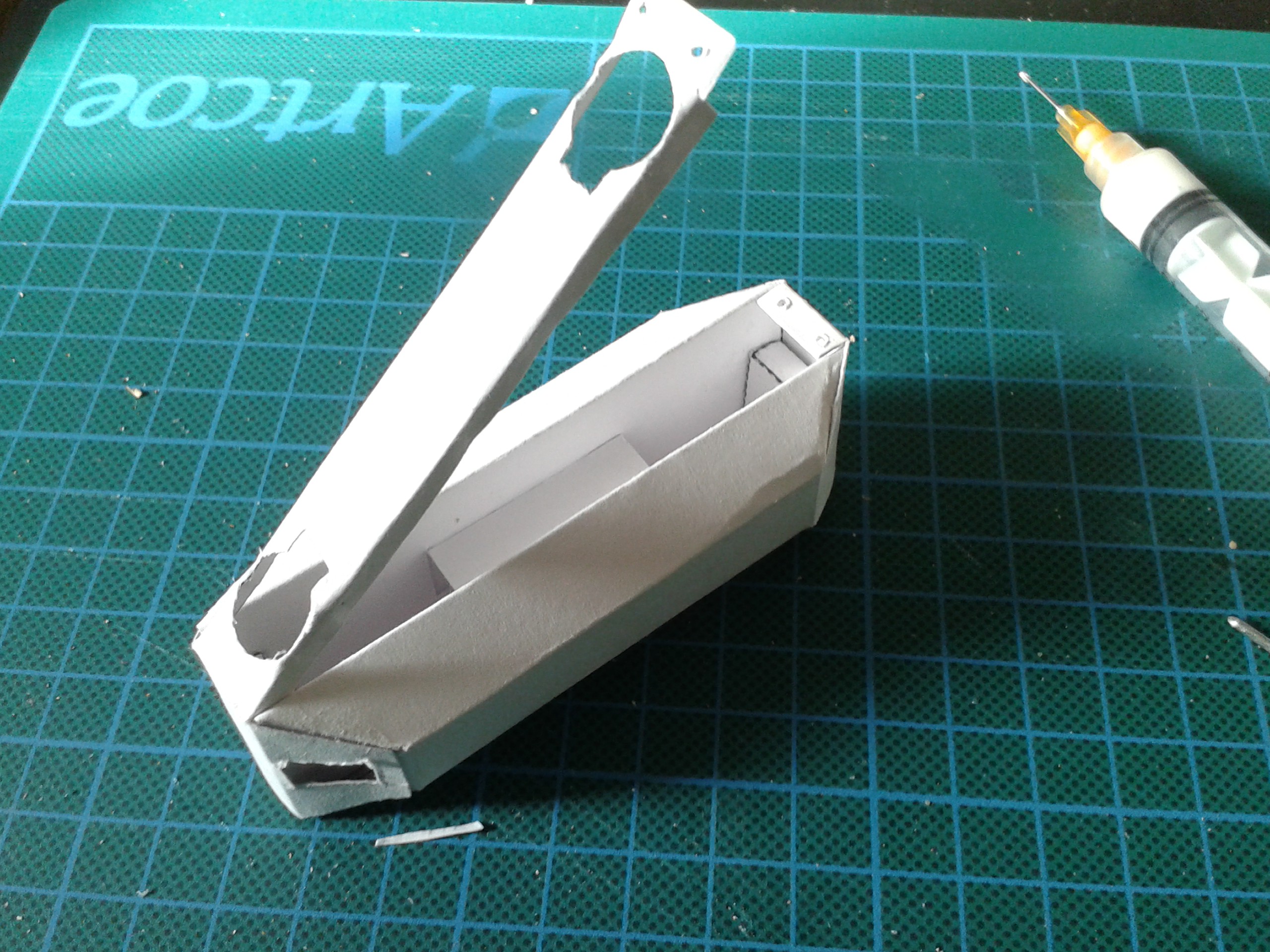 As I said, these parts are modular. Here's the other end being prototyped onto the shell at the body end. I hope hip replacements get this easy in the future. 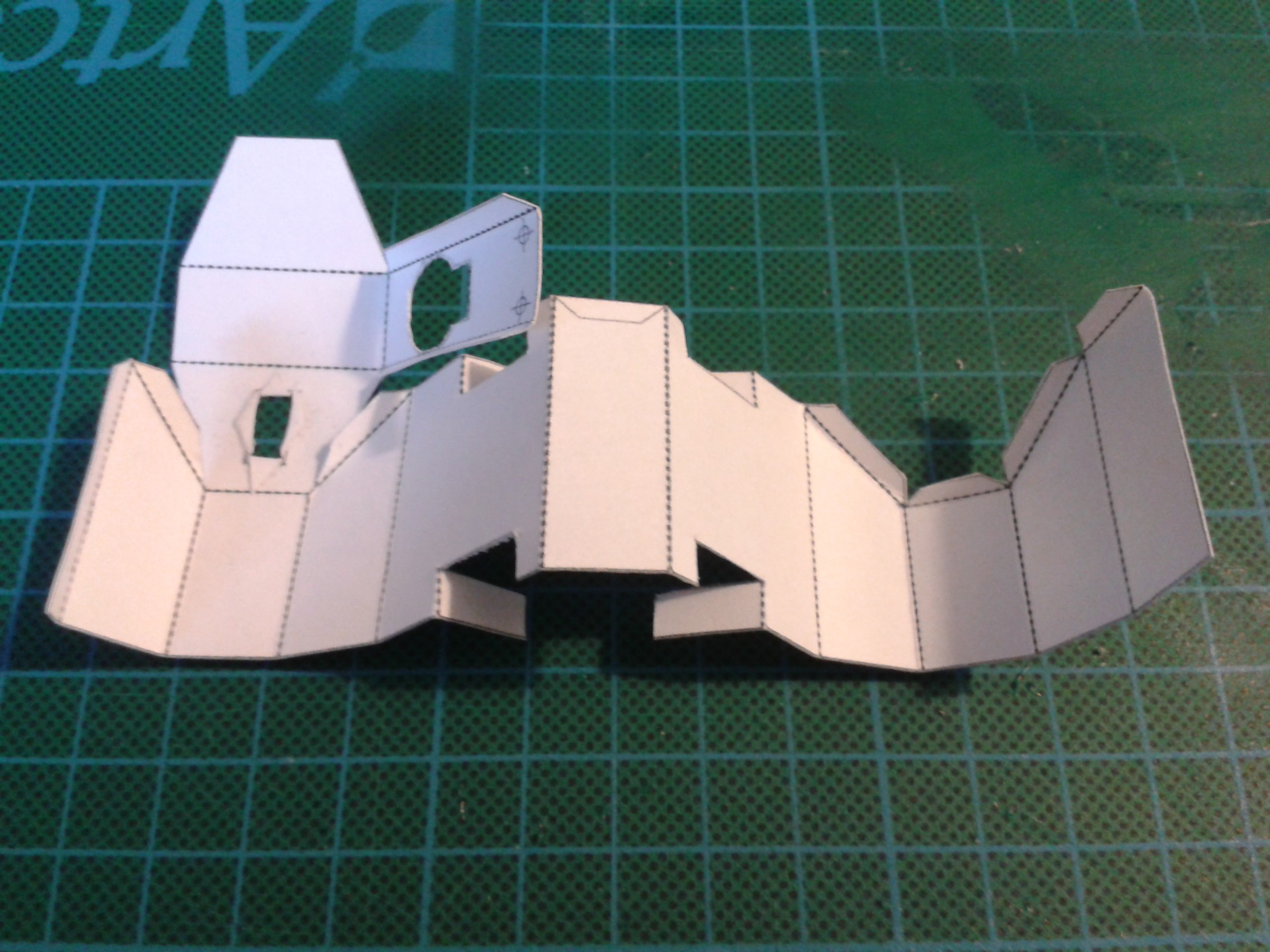 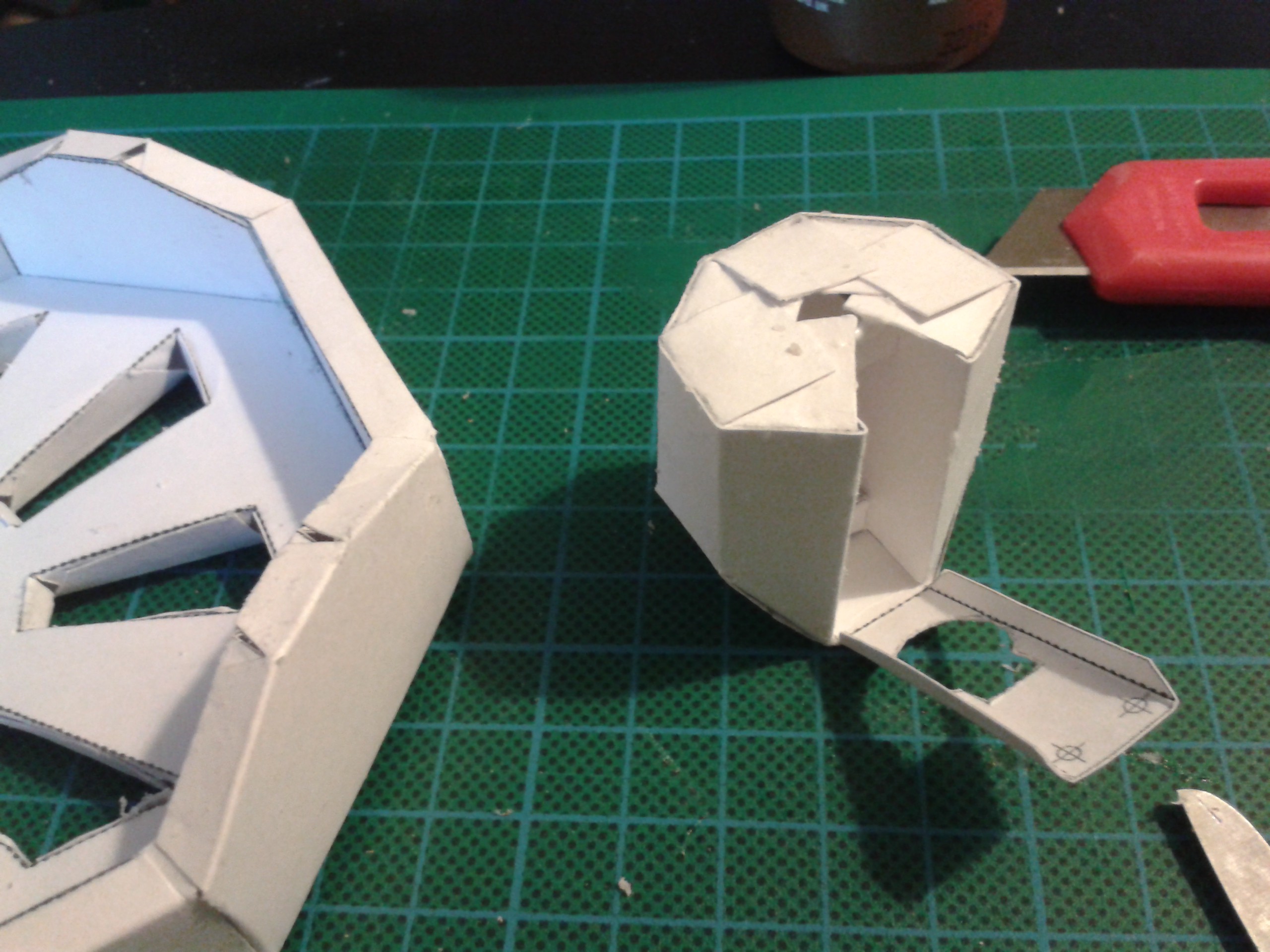 And the shell itself of course. This features a customisable panel in the bottom which is used to provide ventilation for the electronics and also structural integrity. This part has the greatest amount of stress to deal with and needs to be solid. I chose a pattern I knew would do this, but then I realised this could be used to aesthetic effect, and I'm going over a few designs for graphics in here. Watch this space... ;-) 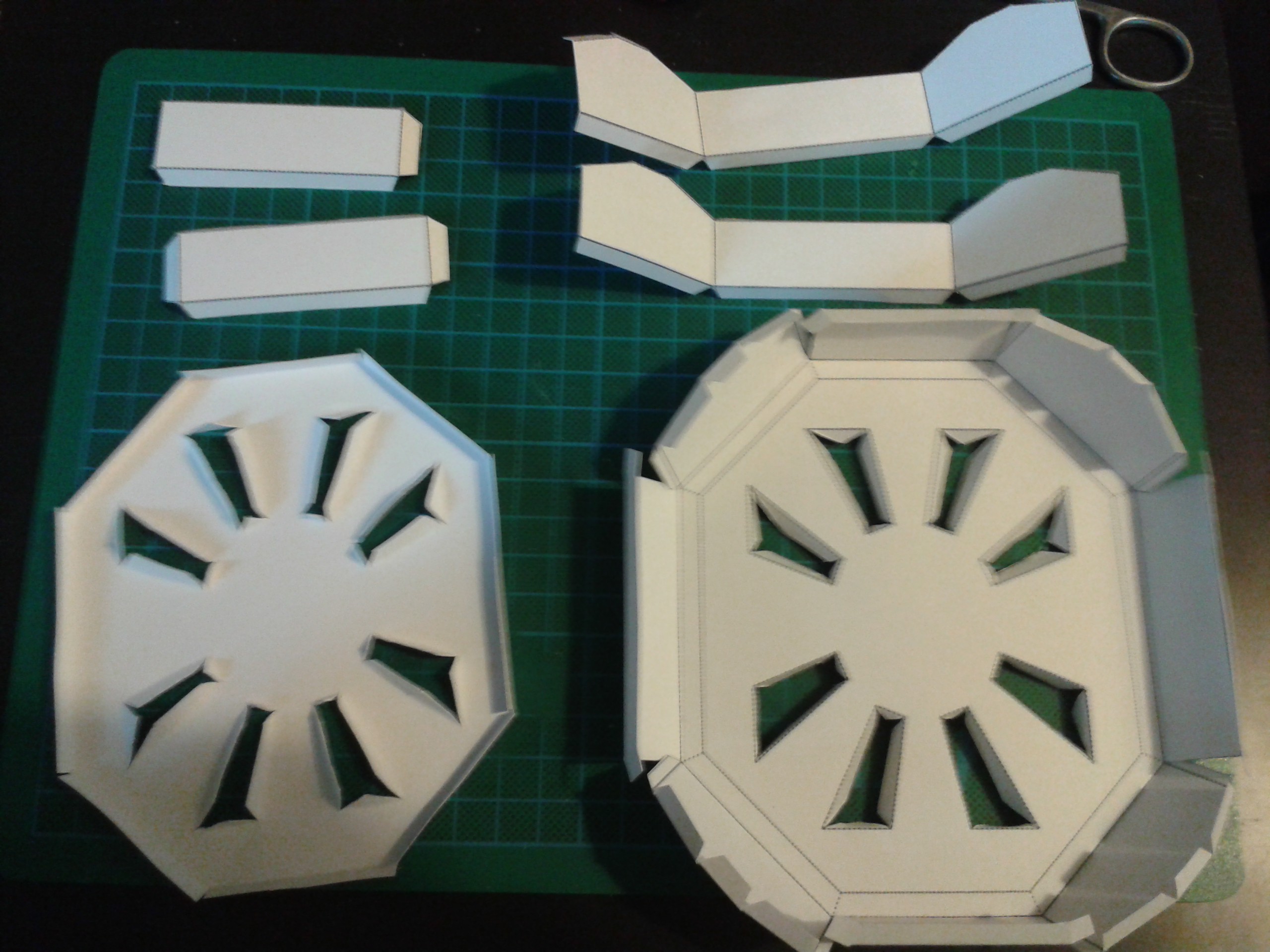 Here's a picture of what it looks like after a couple of strong beers. Nobody's perfect. ;-) 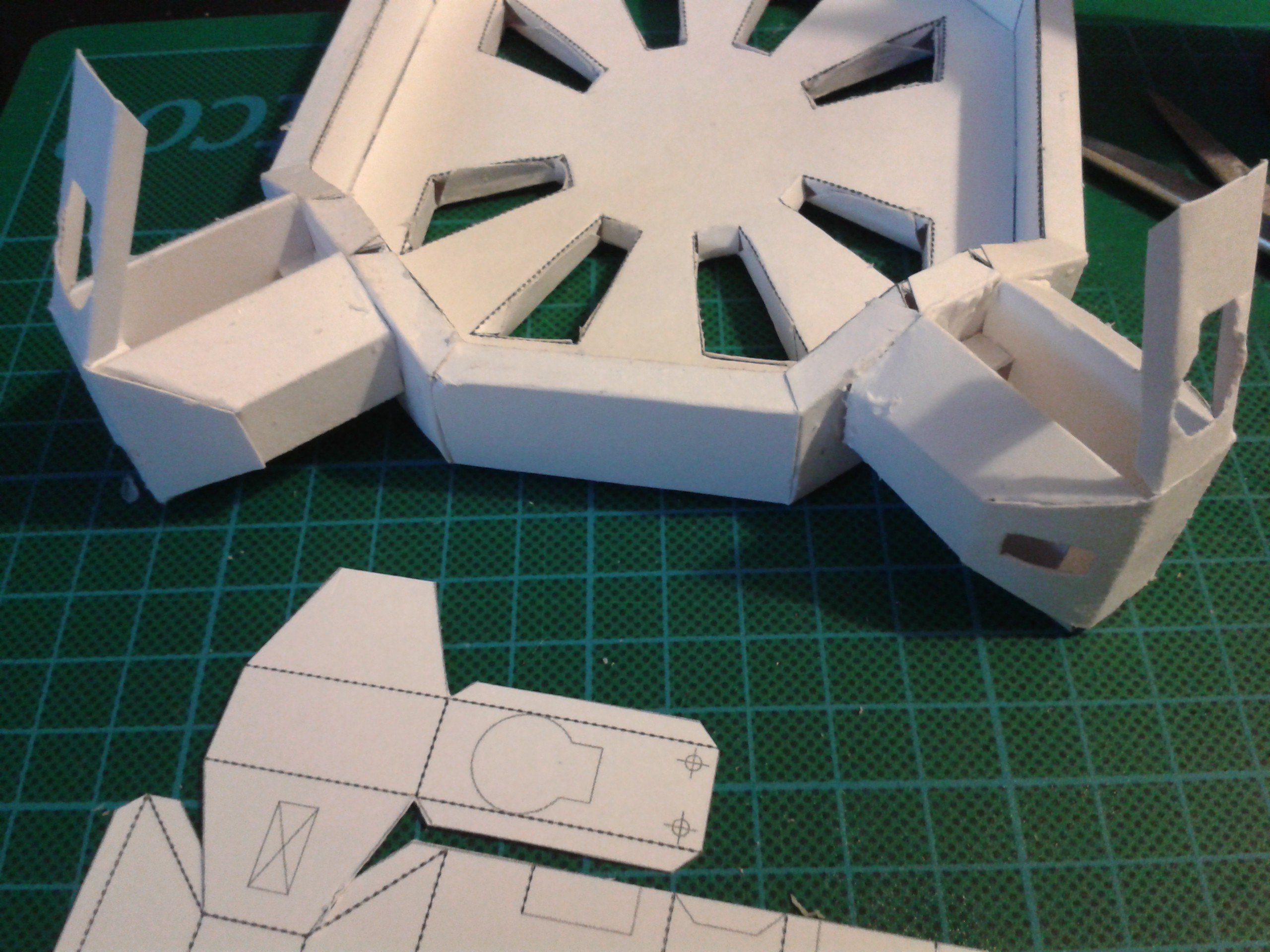 It needs a lid still, that is for now a simple octohedral dome with a port for the camera. I'm still working on this too. 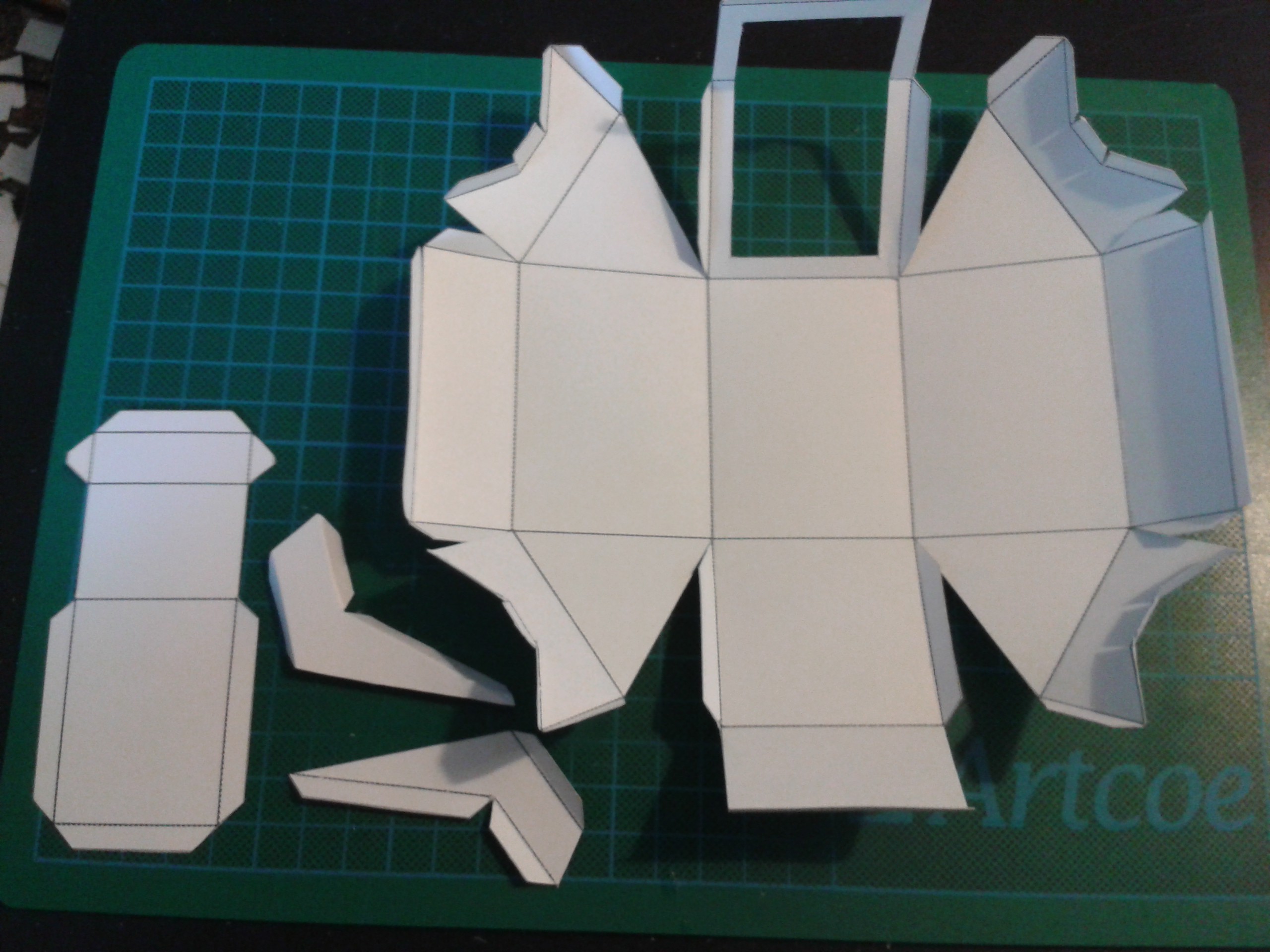 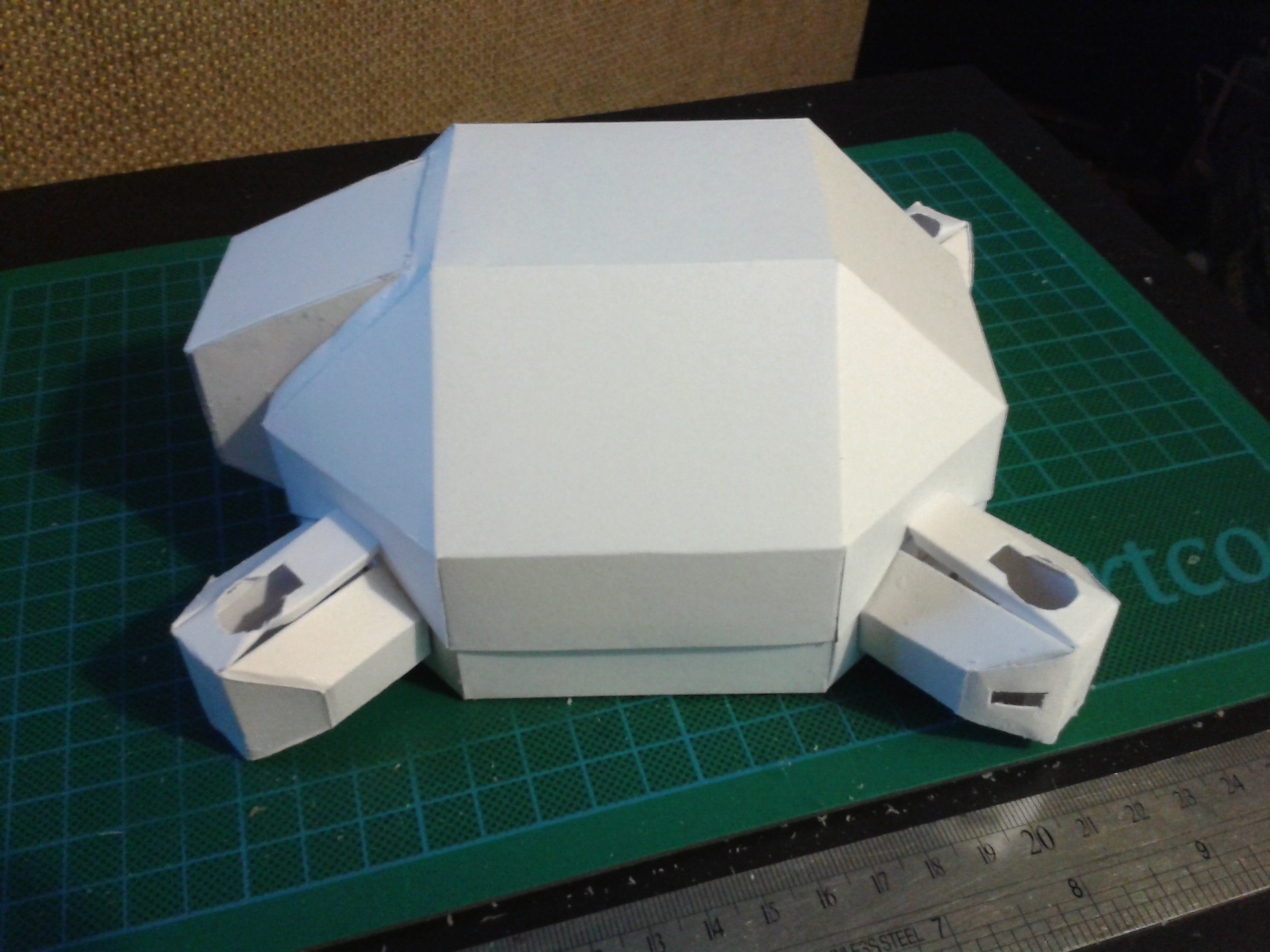 All together we have the 2nd generation prototype. It is constantly being revised to make it as robust as possible, one consideration was feet skittering on smooth surfaces. Mark is looking into technologies to help with this, one suggestion of his is dipping the feet in a liquid tool handle rubberiser. I have not seen this in the UK - yet - but it sounds like decent form to give the thing its first pair of good boots. :-) We've looked at other materials besides cardboard after realising that self-recycled materials were also a possibility. The initial discussions for the project touched on the fact that paper and card were already a recycled material besides their other qualities, but the inclusion of @markgeo to our collaborators brought this to the front quite literally as he attempted a build of the early generation limb parts using cardboard scavenged from cereal packets. This was necessary as he is developing Cardware in Thailand where card stock and other things we take for granted are not so easy to obtain. MarkG is using this ability of the system to promote robotics in education there, as other resources needed to teach the subject are not easily available.

He has written an interesting piece about the technological shift in Thailand, where this is particularly relevant. This particular competition was open to European countries too, and we got our backsides kicked.

Here Mark talks about the impact different cultures have on what we are trying to achieve.

Inspired by Mark's hacking of my system using materials I'd not considered before, I looked around myself for something suitable and previously considered trash.

I'd thought about plastics, and tried PET for its monumental strength and ability to take a crease without snapping. It's hard to glue, but the parts are indestructible in normal use. Cardware with 200GSM card will survive a minor tumble but a few feet before impact will crush the folds under it's own weight. The PET sheet I bought specifically to test is thicker than a soda bottle by a small margin and the resulting limb impervious to unmaking. I tried without success. 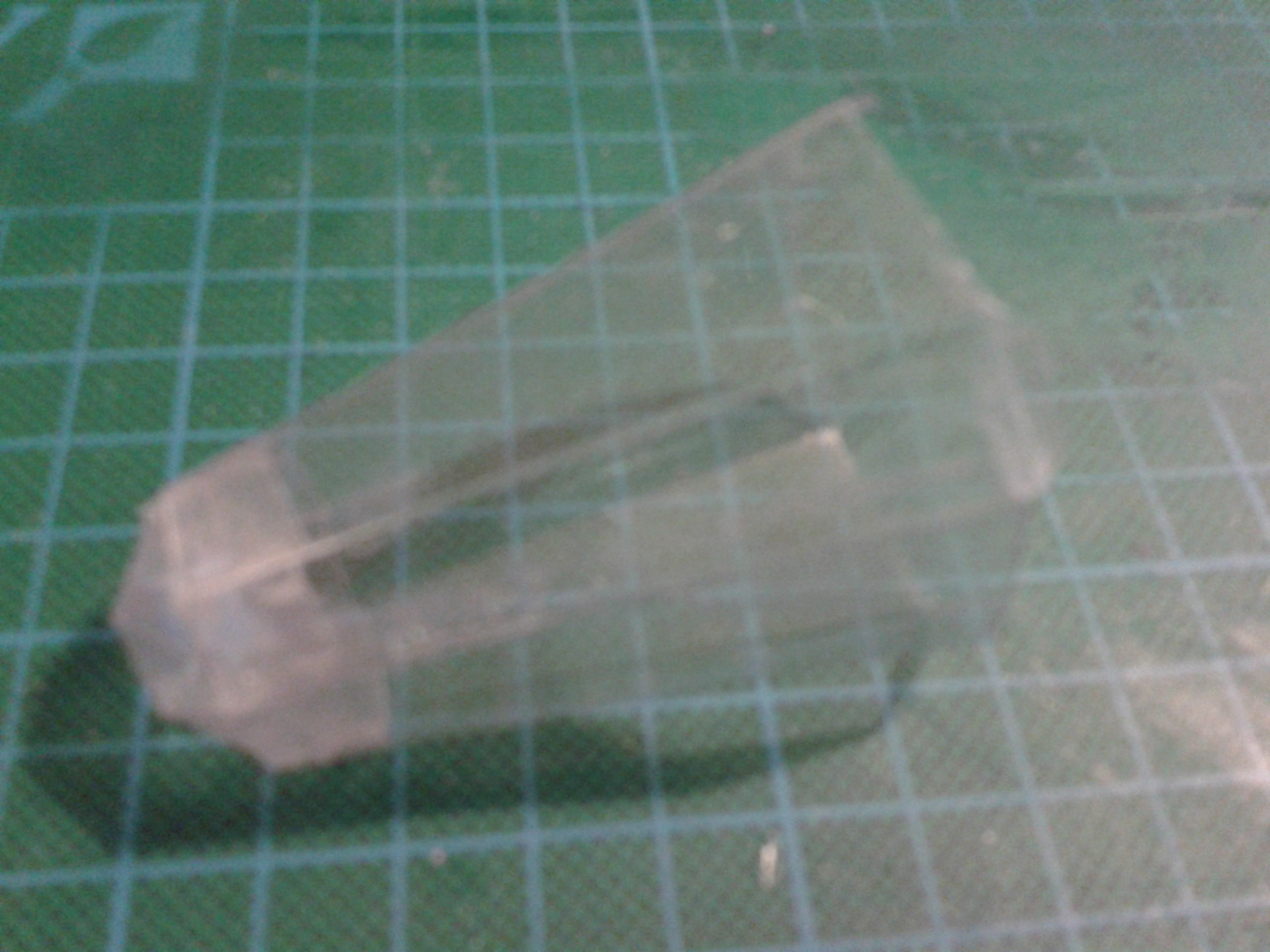 I'm figuring that a soda bottle will have similar strength but cost nothing to obtain. Forgive the picture quality, another odd thing about PET is it is IR transparent so the autofocus does not work and tracks the background instead.

Thinking along the same theme of recycling I purchased some lager cans and set about separating them from the contents. Now this is recycling I can get into. :-) It proved to be such hard work that I had to sleep on the project and began in the morning hampered by a strange headache. Despite this the thin metal behaved reasonably well and this was constructed with minimal blood loss. 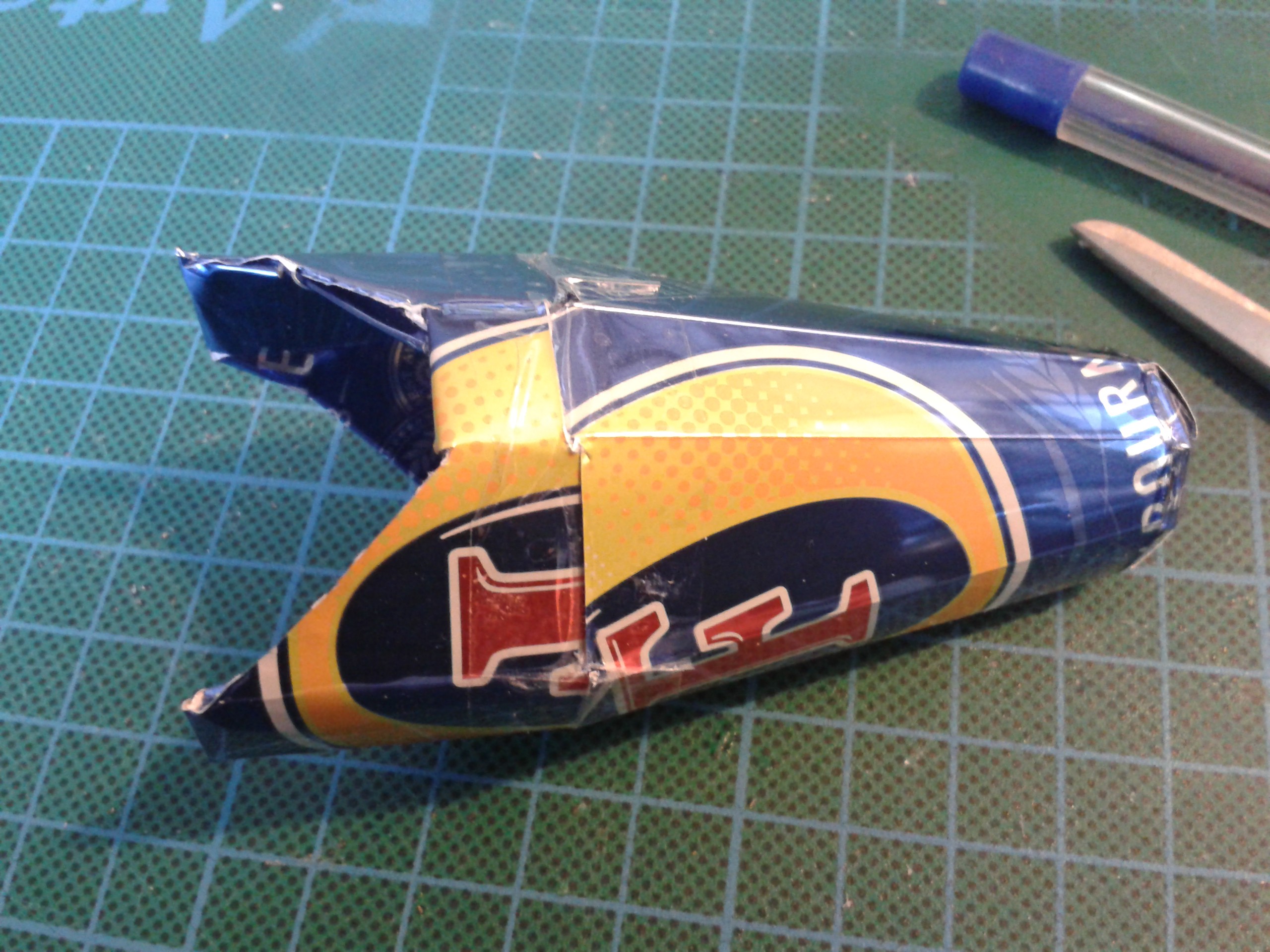 Origaime can now see with its Integrated Camera Unit. This is a replacement shell print containing the parts needed to include stereoscopic vision. 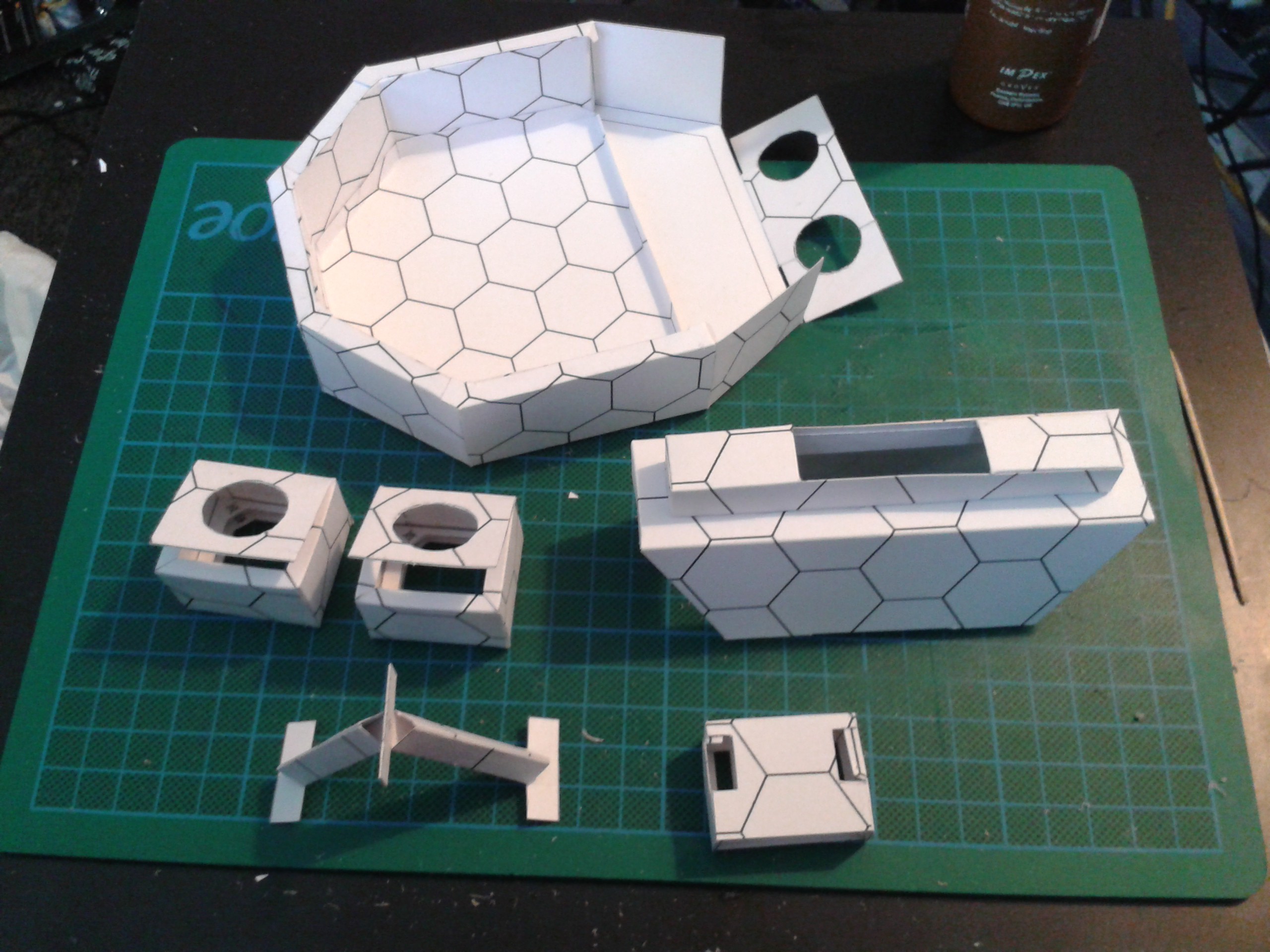 Origaime is based on AIMOS, which was designed from the outset to drive a flexible architecture. This uses only two servos, one for the cameras and one for the neck but can be easily adapted with a hip module to realise a talking head. I'm not big on anthropomorphisation, but it wont take much to adapt the system for almost any architecture.

This is just an ICU base, without hip units, mounted on a servo so I can work on the 3d motion capture code. 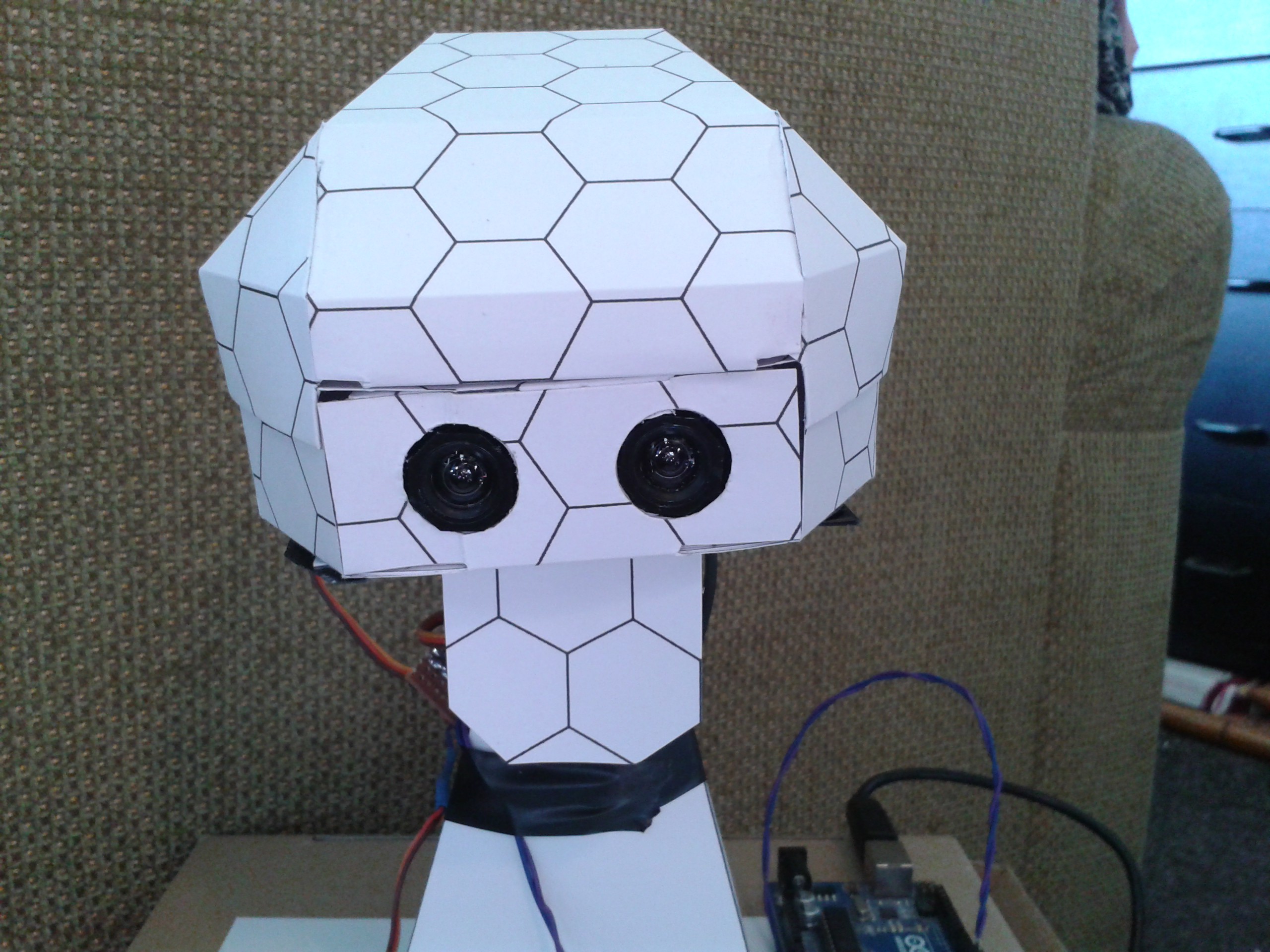 ALL YOUR BASE ARE BELONG TO US NOW :-)

Mark One also suggested joining thigh modules together with hip modules, a lower leg on one end and a new head unit on the other to experiment with snake/caterpillar type motion.

Scientist, poet, artist, author, musician. These abilities and more are what make up many people In the world but there are times where these abilities are all rolled up into one person and that one is both feared and admired, Loved and hated, Talked to or talked about.

The Old Man as he was known was one of the latter kinds of person. He felt alone and as if he was on an island far from anyone. There were very few in the world that could relate to him and understand what his life was all about. His dreams were a colorful swirl of shapes and patterns. Music and speech translated into numbers and mathematical equations. In his world, all his senses blended into one and the Old Man could not even smile because he felt so alone.

The Old Man was an inventor of sorts with many of his creations flooding his workshop. His pride was AIME, his personal robot assistant / helper. AIME was not human in form. Having the general shape and form of a spider, it was much larger and with the use of special tool racks mounted on its back, it could be programed for many tasks. Plumbing, electrical, building construction as well as delicate electronics work and being the master chef. AIME was also programed for playing many games with the old man when he desired a distraction from his work. But the spider was not alive and could not give the human the true companionship that he desired. The man wanted someone who truly understood him and he was sad that his search for such a person was for naught. The giant spider cooked and cared for the human but did not question its actions as it was its very programming that controlled its functions. Even bringing the man his evening glass of home brewed wine was a strictly controlled and timed event.

There came one day an event that shook the entire world. A solar storm erupted and a massive flare was ejected toward earth. Most of the electronics of the time were either destroyed or were damaged severely. The laboratory of the Old Man was no exception and except for some backup power sources, his equipment was mostly not functional. His fear was that AIME was also damaged as the spider was sitting immobile and not responding to anything he could do. All of AIME’s programming was either wiped out or severally corrupted.

Days passed and the Old Man was trying to find ways to get his equipment back into running order. He felt so utterly alone now that AIME was not able to help him with even the simplest of tasks. Then one evening the Old Man had the scare of his long life. AIME was standing in the doorway looking at its master. On its serving tray was a glass of wine. The solar flare may have corrupted AIME’s programming but no one will ever know for sure. The Old Man never tried to study why his robot came back to life but one thing he did know was that it was no longer a case of AIME being programmed to do a task. It was now a case of AIME wanting to do it.

And the old man smiled.