Atomo is a system of modules to build or develop electronic things. It includes four parts: controller, connector, IO, and power.

Atomo was designed to be a system for building or design new things. It isn't just another new dev board but more of a way to approach prototyping and developing electronics. The launch line includes three different microcontrollers along with a range of connector boards, power modules, and a few IO modules that handle stepper driving or heater control. It is Raspberry Pi compatible, all controllers have an expansion port, so it could be used for creating ROS projects or as a general extension for the Pi with ADC and power. There are quite a few special features, so please read on to find out more.

The line will be launched on IndieGoGo soon. Sign up at atomosys.com for an early bird discount!

Atomo started out from developing a new motion control board for another project. I saw that prototyping something that was new and complex just was not made any easier with the tools that are on the market. The sensible approach was to strap a dev board onto a protoboard and start wiring things up. 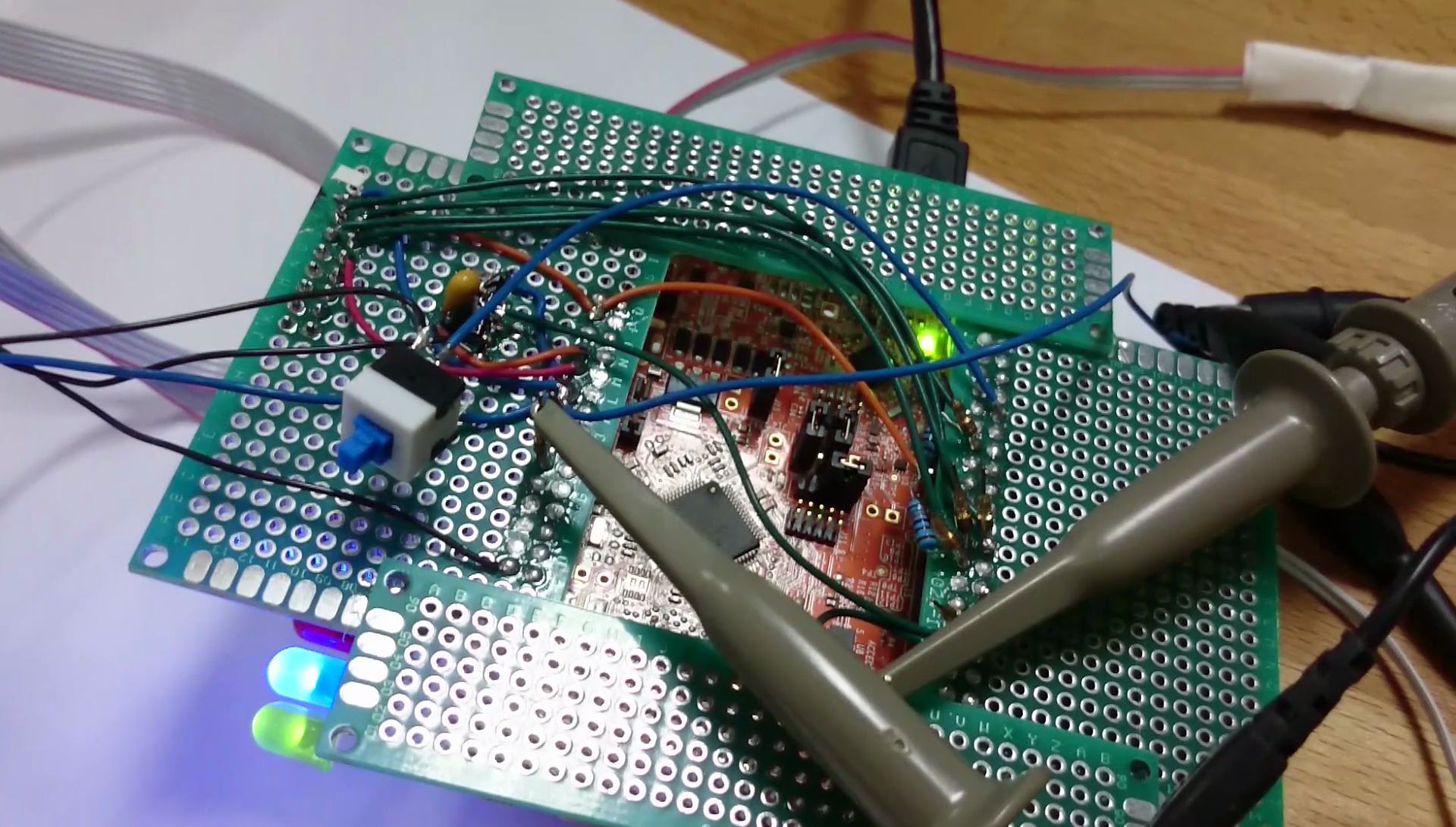 And the results are something like this. It works, but the next step in this process is to either make a PCB that works with the dev board (in this case that wasn't able to provide enough IO) or to do a full new PCB single board design. Both work, but it felt like the process was missing the ability to iterate or add things in a reasonable way.

I started thinking back through other projects I had done, and there were a few commonalities:

1. Cleanly routing or getting enough power was always a bit of a hack and took up more time than it should (this is especially for robotics or other high power things).

2. It was hard to mix together existing shields/HATs or whatever with new designs and have the result to either be a good solution or really suitable for longer use.

3. Debugging new systems was a pain when things went wrong. If a drive transistor was blown out, it was embedded in a board with many other functions that might or might not be interconnected.

I'm sure many readers here have other typical nits with existing dev boards, but I think the overall insight for me was that dev boards are pretty much just that, they usually take care of the bare minimum around the controller, but they are not made to iterate a design easily or to approach a system design in a more simple or logical way.

So, first iteration was a modular system for automation and robotics, you can check it out here: https://hackaday.io/project/13433-atomotionopencnx It was launched on IndieGoGo in September and had a luke-warm reception, but the feedback was pointing to that the approach was good, just perhaps that specific application was not the right fit.

October I went back and started looking at what it would mean to do a more broad purpose system, something that scaled up and down to be both able to make huge robots but also make simple systems that you might use a small Arduino for. We made the first working iteration of the system design then. 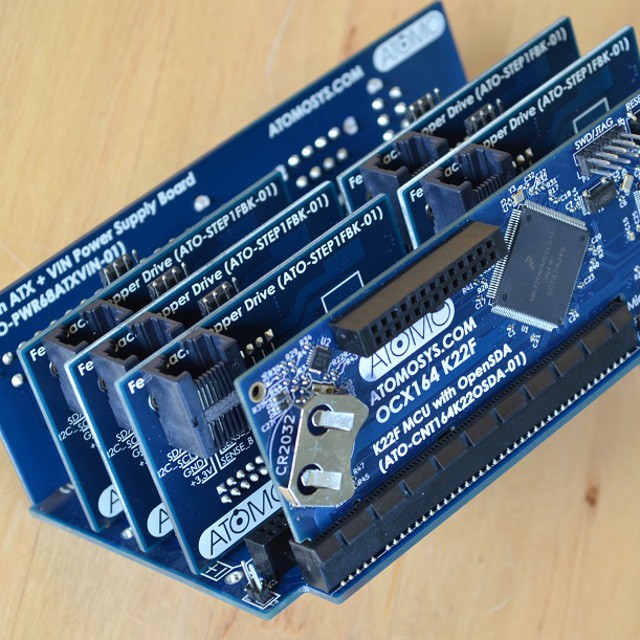 Having gone through this iteration, I finally really got a feel for where we were heading and designed a launch line that included improvements over this version. We went from one controller board to three, and switched from a large K22 (NXP ARM Cortex m4) to a smaller K22 and a larger K64 which were better supported with tools for flashing and the like. The smaller board based on the K22 is more or less based on the FRDM-K22 dev board, but we switched to a KL26 controller for the OpenSDA/DAPLink USB flashing interface, same as used in the Microbit. 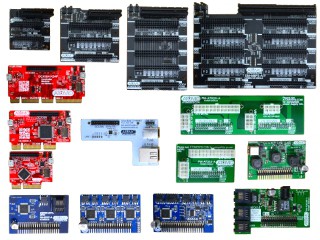 Now, doing the design for all of these boards in 10 weeks was a bit of an effort. We used KiCAD for the schematic and layout. I had two people working on it (a contractor and myself) for the whole time. The interfaces, like the module connectors, were fixed as early on as possible, but there were some later changes that we only found after more or less completing the full round of designs. So, that 10 weeks was actually two spins of some of these boards. In order to sort out the connections to all of the modules, I put everything into spreadsheets with checking back and forth to look for missing connections and duplicate uses of different port functions. I then generated the information for the KiCAD schematic from this and created the main components and connections in this way. By doing this, the two controller boards using the K64 were able to use the same pins between them for the first four modules and I was able to save a lot of time with keeping track of what was what. There are pin configuration tools that help validate on the duplicates side, but there are not any tools out there that do the checking between different interfaces, other than just the schematic itself....

I did something  a little bit like this for a vehicle tracking outfit I did some work for 12 years ago. We had been having great luck with 68HC11  so I built a board that would make everything we had ever built and a lot more including the new modems and 2 or 3 old modems that were really cheap.  They were working great until a fellow fresh out of collge and still wet behind the ears that worked for one of our jobbers sent us board his bosses had him working on that was a duplicate of ours that cost small farction what ours did. It was his way of giving us a heads up about what was going on. I hired him the next day and it was the best move we ever made. He had his $0.75 chip running on our $18 dollar board in 9 hours and worked every bit as good as a $18 dollar single chip 68HC11 or an $85.00 dollar  68HC11 expanded board did. at the cost of $2.50 socket to match the pins.

The expansion boards sure look nice I just hope it works as well as they look and not like mind did.

So far with doing some testing, it seems to work the way I want it to. It is much easier to develop new IO modules with the power and other things more reasonably distributed. I'm sure there will be a lot of good feedback from people once they start using them, but I think we've covered most of what is needed to improve the overall experience.

I think this will give you a more clear picture of what actually happened with MakiBox: https://medium.com/@jonbuford/how-convertible-debt-kills-c5608f503719 That site you linked to is a personal attack that is both hateful and ignorant.

In short, yes, I'm an entrepreneur and I have had my ups and downs. Atomo is not MakiBox, and we have had our designs confirmed by Arrow as being viable for production, that can be seen clearly on our Indiegogo campaign. If I ever wind up with enough resources to find a way take care of ex-Makible customers that got caught up in actions by its investors, I will. On the other hand, if I am not given the room to move on after several years to try to rebuild, then there is no other hope of resolution.

So, James, I understand that you were disappointed, left hanging, and caught out by Makible failing. I think we are lucky that we were able to cover most of the orders before things did fail. Some of the other companies, like Pirate3D, left a much larger crater. If I ever am able to rebuild to where I have resources to take care of those MakiBox customers that were caught up in the company failure, I will.

Not to rile up an old topic but i just randomly came across your YouTube channel i was subbed too (while cleaning up old subscriptions) to see you've been posting new videos these past few months, and after some googling around on the 'Atomo' i ended up here.

Honestly dude, just dont go down this path again, just take a day-job, yes your a entrepreneur with its ups and downs and Atomo is not MakiBox, but people dont forget so easily/your name pretty much went trough the sewers, and to some extend with good reason. Im only vaguely ashamed to say  was happy to see the indiegogo campaign on the Atomo failed.

Its no secret that hardly any MakiBoxes went out the door, you may be unaware of this but we backers started a site especially to track makibox orders long before you suddenly played the 'oops no longer delivering'-card, and for as far as i was able to tell at the time you guys delivered like 20-40% at best (taking into account that prolly 50% of the backers never even visited that site)
Ontop of that its clear from those deliveries and the later clearance sale that half the machines wouldn't even have worked, lots of them came with broken hot-ends, cracked panels, broken motors, etc etc.

Again, not trying to tear open old wounds here, and im sure you have the best possible intentions, just, wow man, do yourself a favor and dont try this sort of thing again, even if you get some other company to verify your idea as being solid.

@suicidal.banana The fact is that we shipped about 2000 units. Delivered units were significantly higher than your 40% top end. Please don't reference things as facts that are not really accurate, it doesn't work well in politics, and I appreciate it not being done here. We had relatively low return rate and defect rate. The hot end had mixed results which we were just starting to address when things went downhill. We had switched to a new flex circuit material that reduced offgassing by eliminating the adhesive, but it ended up that the adhesiveless material was more brittle and had more frequent failures in the longer term. We were already working on a cartridge heater based design that would have been offered as a replacement if things had worked out. The design and functionality were pretty competitive with what was on the market when it shipped, which actually means that we needed a V2, just like most were at the time. Given how many other spectacular flameouts there were in the 3DP industry, I think it is fair to separate out things and move on.

As far as Atomo goes, we are moving ahead with production, so, I'll see how things grow. It will be pretty organic, and I'm avoiding getting people on board that have expectations that are not in line with the product. Instead of just giving up, as suggested, I'm learning and growing, and we will see how things go. Separately, I can always make sure that I have a source of income, but that doesn't have anything to do with attempting new endeavors. And I hope you don't give up on your dreams too just because you failed before.