The goal of my project is to monitor and regulate the temperature of food on a grill. The project consists of hardware and mobile application.
Monitoring food temperature on charcoal grill with single thermometer is inaccurate, some products may be undercooked or burnt. In addition, various dishes may require different cooking temperatures. The device will read temperature of the dishes using up to six probes (thermistors).
The device and phone will communicate using Bluetooth Low Energy, the temperature of each probe will be presented in mobile application. The user will be able to set the alarm temperature separately for each probe.
Cooling is performed by spraying the liquid (i.e. water) over the product, using electric pump. The nozzle is mounted on a “pan and tilt” mechanism (two servos) allowing to control its direction. Using the Android app user can set coordinates for products (with laser pointer), spray selected products or whole grill.

I want to try, at least partially, to automate the preparation of food on a charcoal grill. When the dish begins burning we pour it with water or beer. Why not replace the human with a pump and a handful of electronic components? Yes, it’s about getting of the sunbed less (pic below). 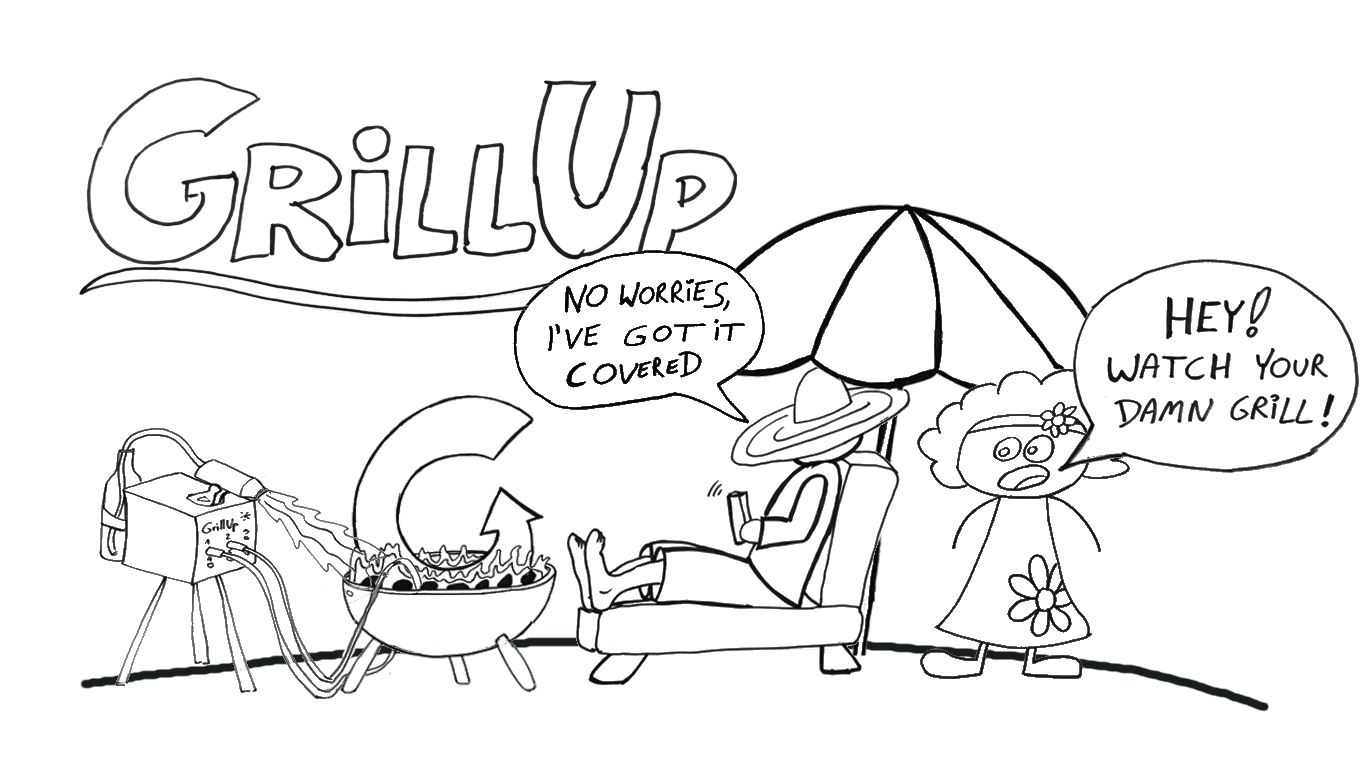 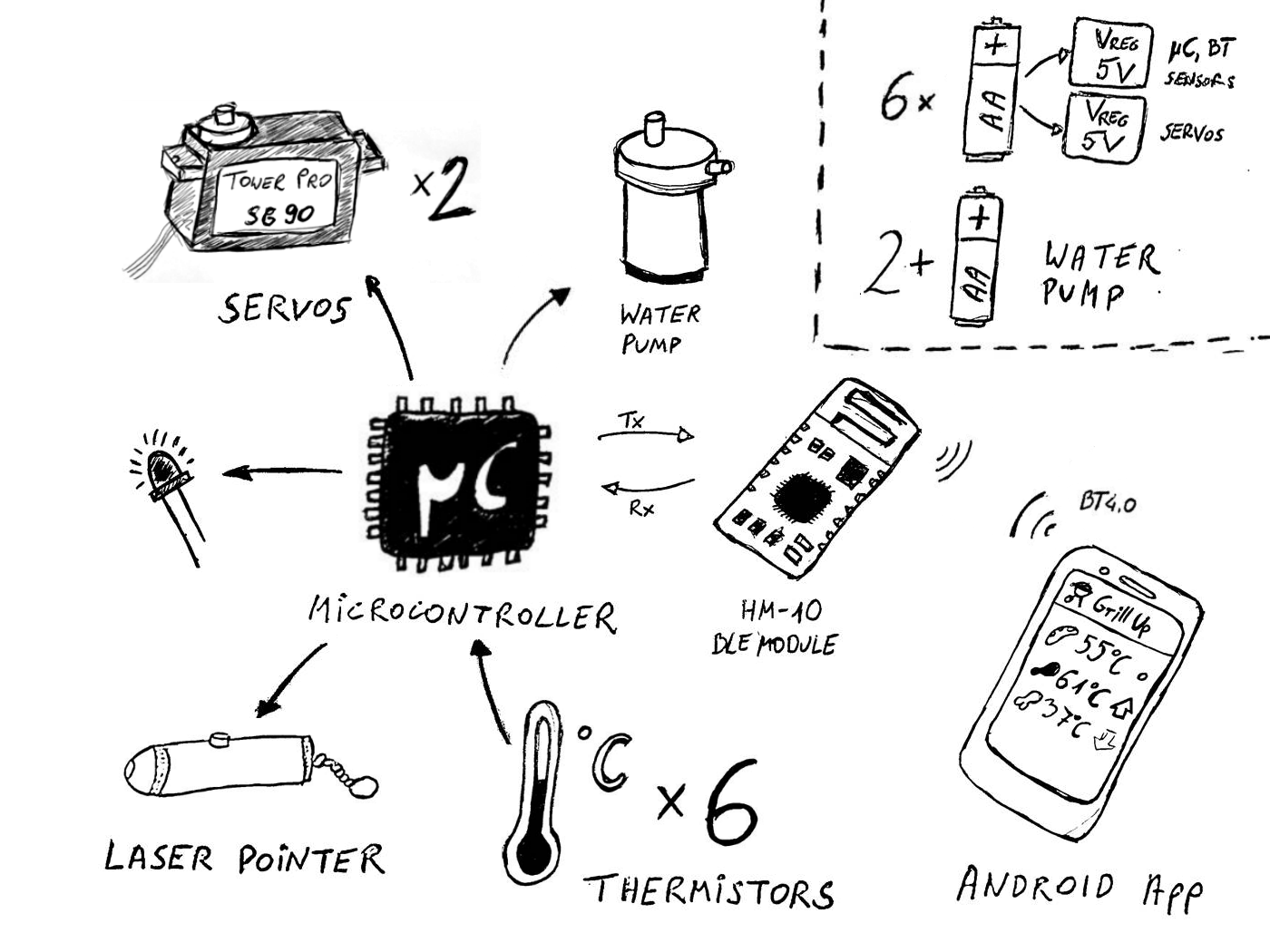 I made a prototype of the device as shield for Arduino. Recently I designed new circuit with implemented ATmega328P-AU. I will update build log as I receive boards and other components. 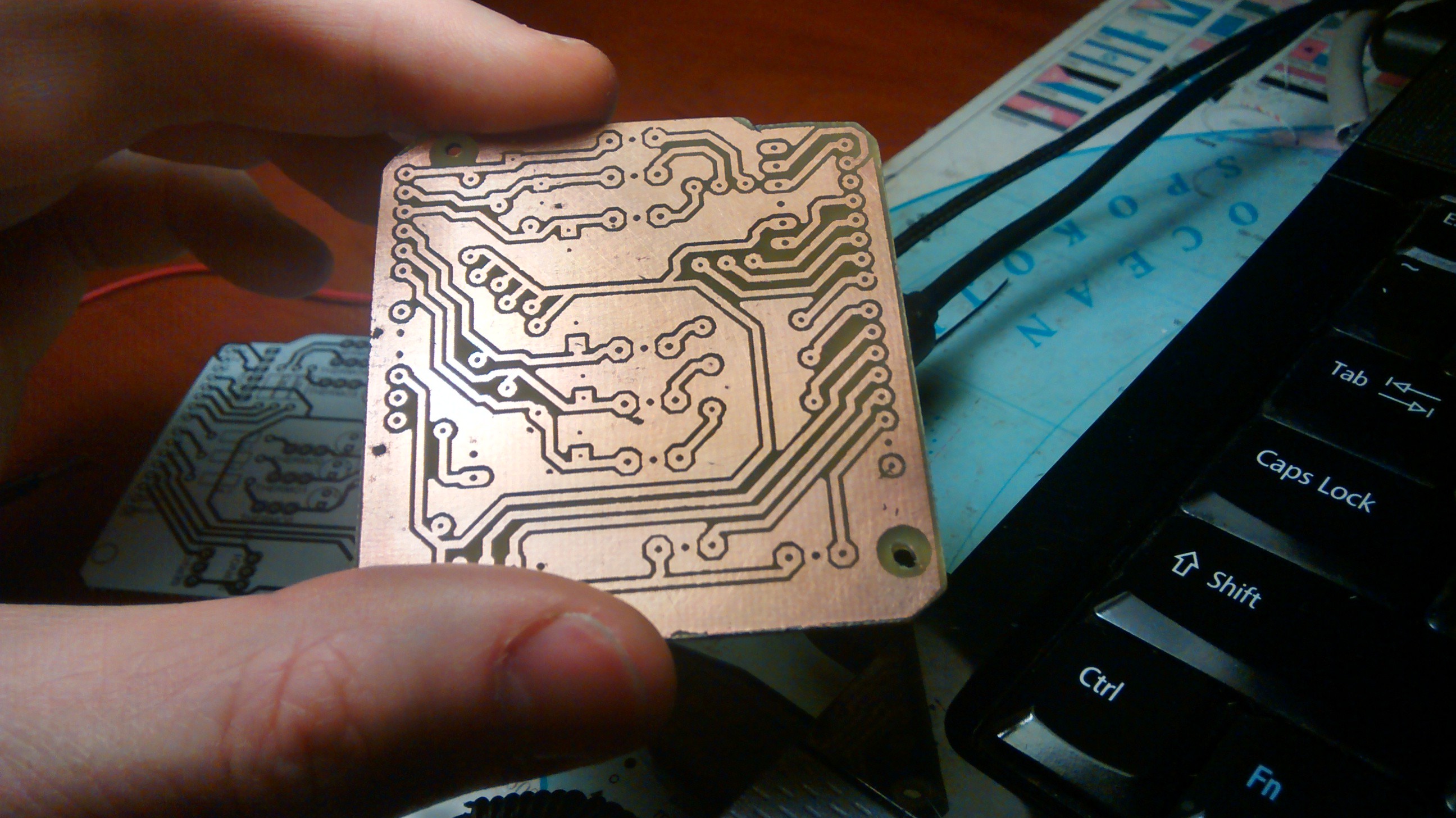 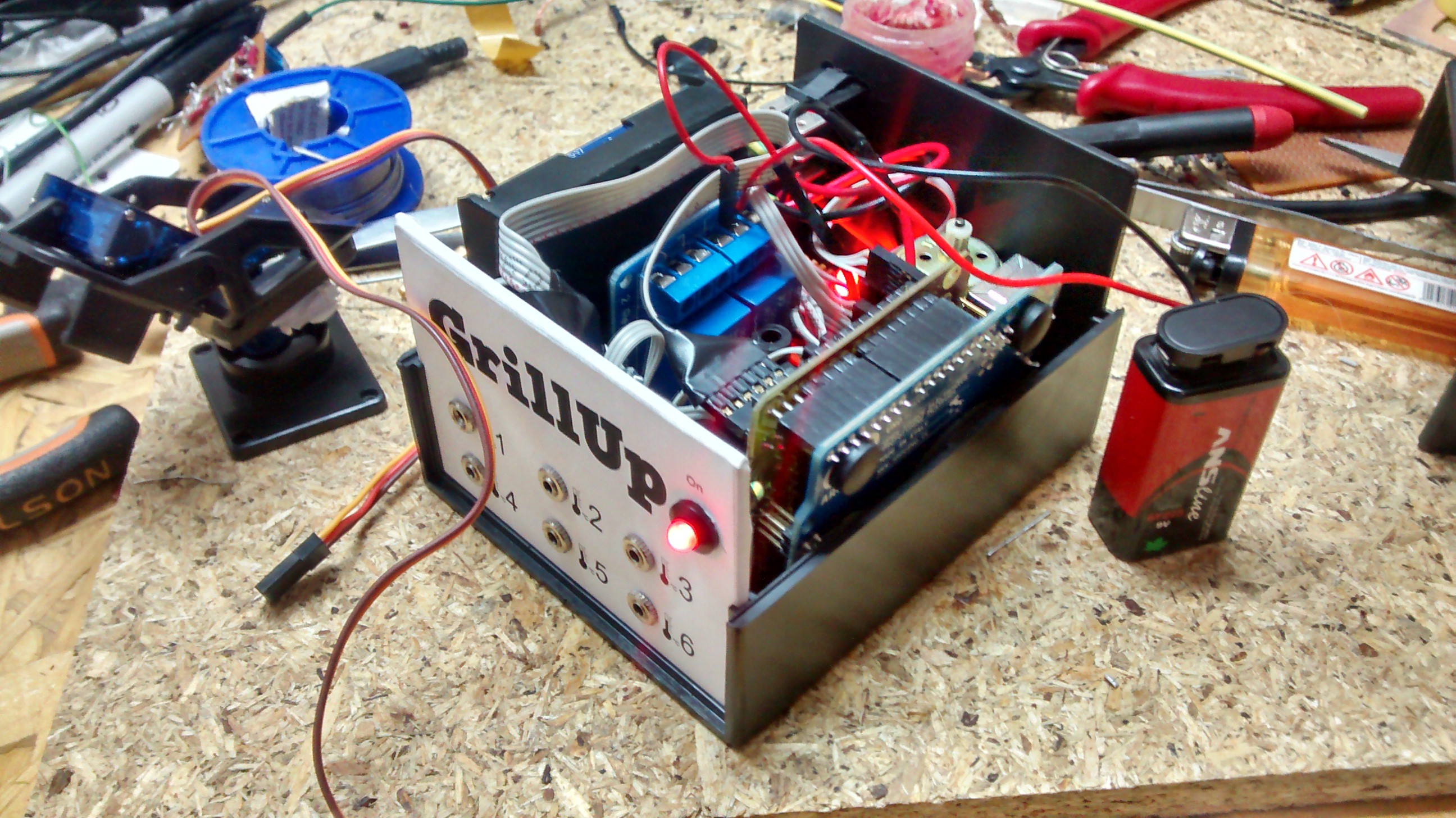 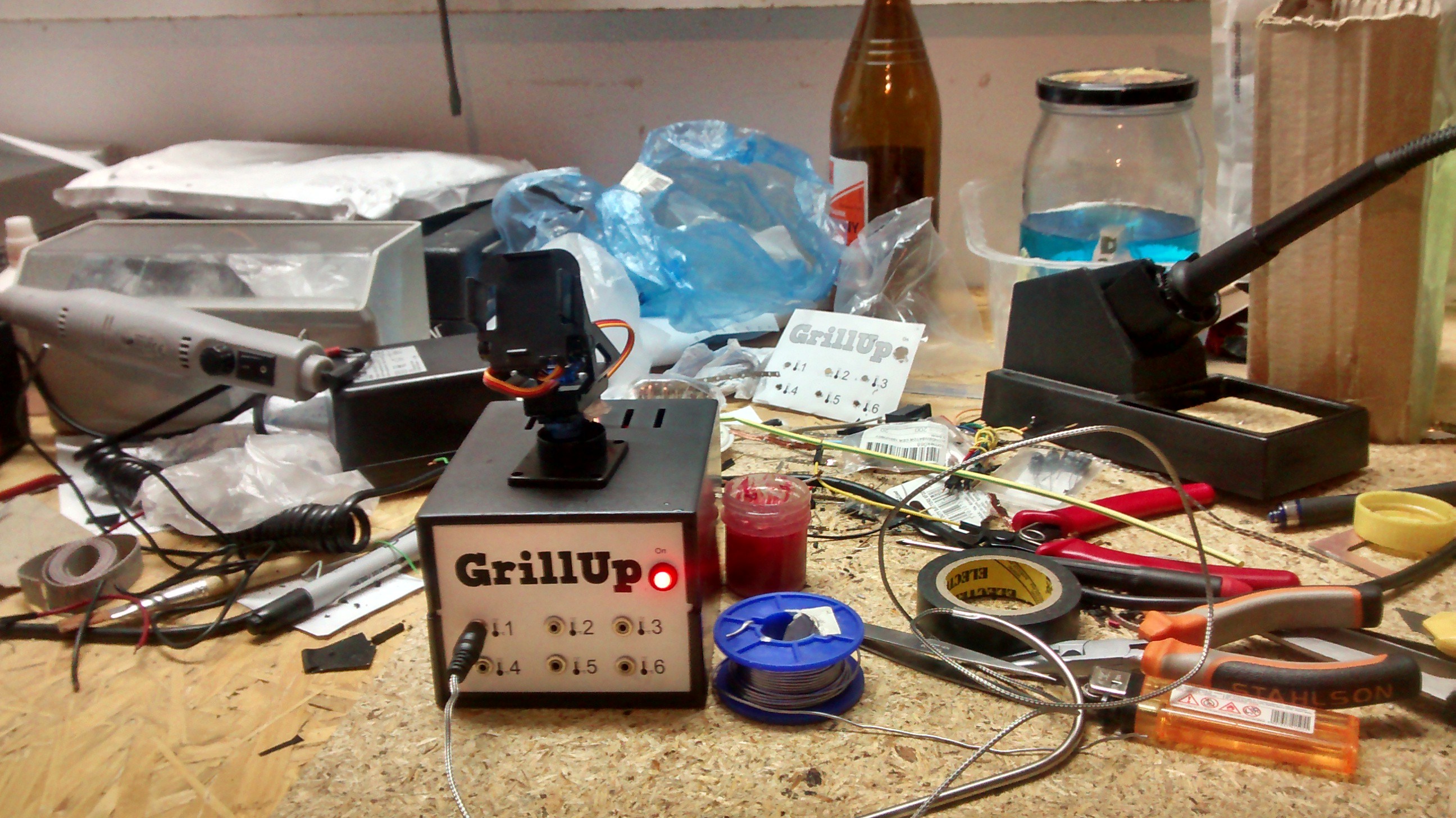 To measure the temperature I use probe from the kitchen thermometer. It is 100k NTC thermistor encapsulated in a metal spike with braided wire and 2.5mm mono jack plug. With an increase in temperature decreases the resistance of the thermistor and increases voltage read on the analog input of the microcontroller.

At the moment I have only one probe. Regarding the purchase options of such probes: replacement probes for “professional” bbq thermometers cost >10$/pcs, cheap thermometer with probe costs ~5$ - this is how I got my probe. However I didn’t want to buy another 5 thermometers just to get probes. I contacted with producer in China and they have sent me 5 probes as a sample.

The third pin on jack female connector is used to detect the probe. When the probe is connected the corresponding digital pin is in low state.

To communicate between smartphone and the device I used HM-10 module based on CC2541 by Texas Instruments. This module operates at 3.3V, thus regulated 3.3V supply and conversion of Tx and Rx lines is required.

In the prototype I used HM-10 module on a circuit board, that allowed to connect it directly to Arduino at 5V. 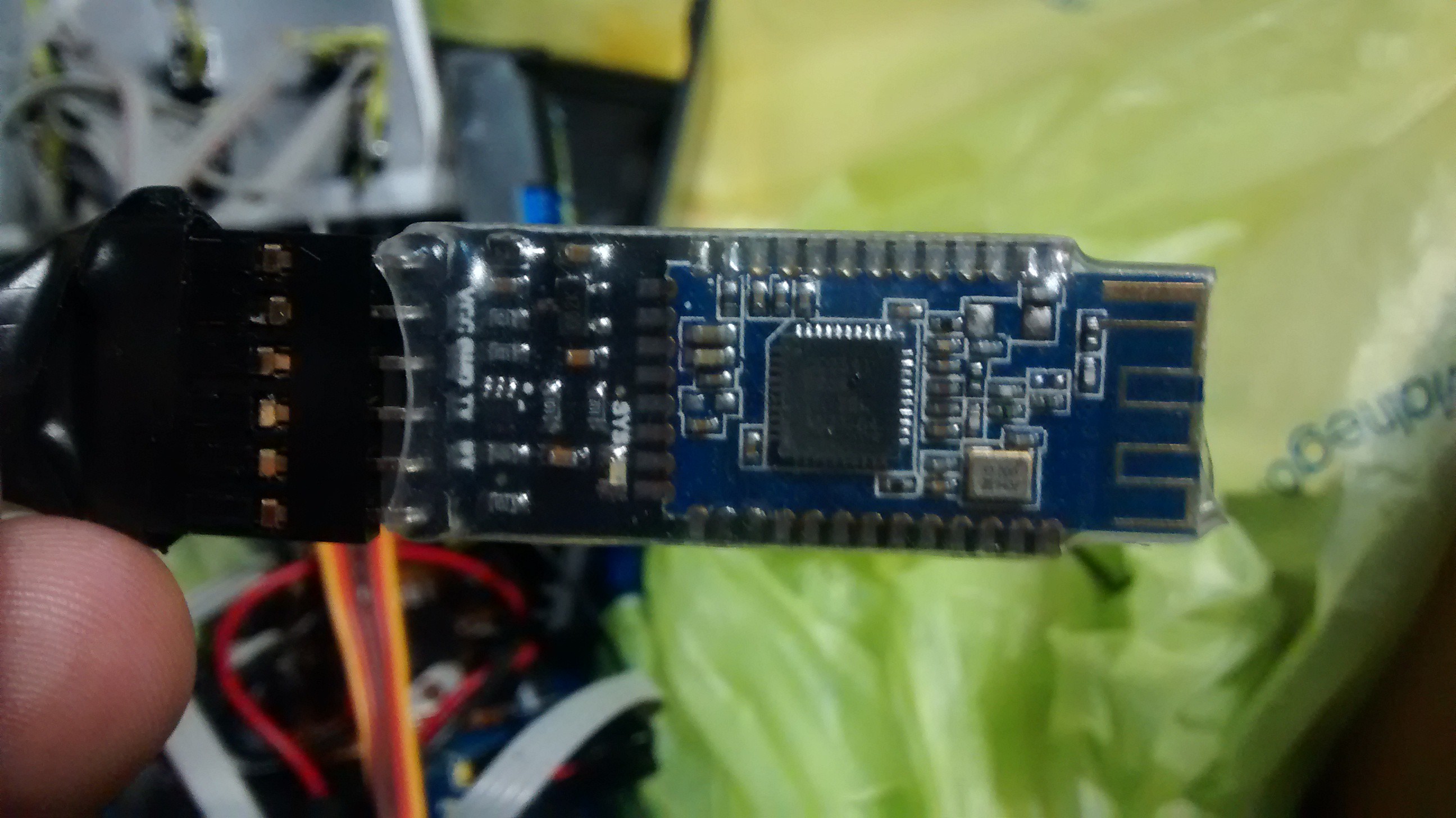 On new PCB board I added connector to this module, just in case. New board uses “raw” HM-10 module, voltage is supplied via 3.3V LDO regulator, 3.3V->5V via transistor and 5V->3.3V via voltage divider.

BLE module communicates with the microcontroller through UART interface. Android application sends 3-byte packet. The first byte contains id of command to be executed, the other two are its parameters. On the other hand, the hardware in one second intervals transmits a 6-byte packet, a decimal value of each byte is a direct temperature reading. When the probe is not connected the transmitted temperature equals zero. 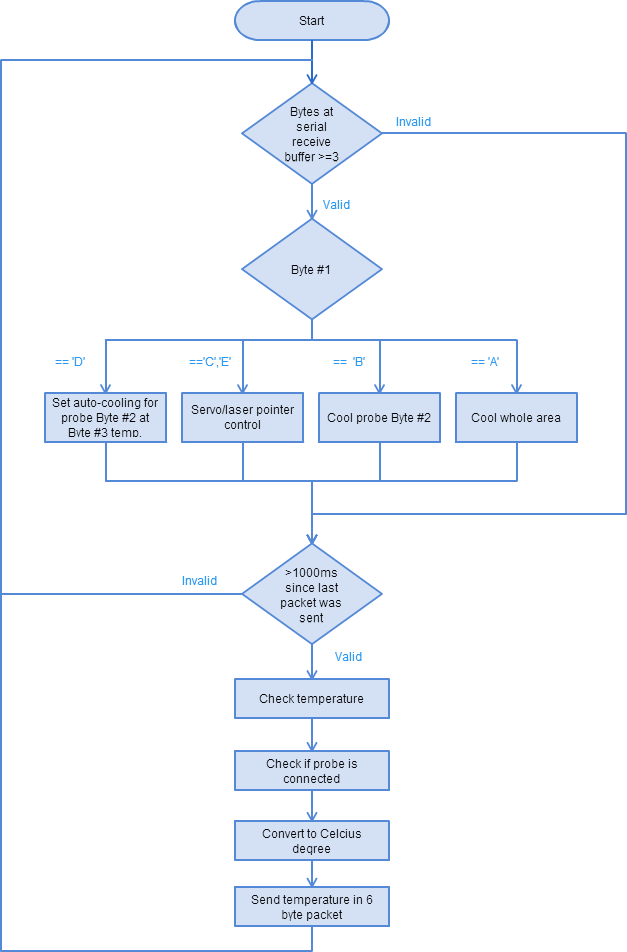 I got a small water pump, powered by 3-12V. The pump draws about 1.5A, so I decided to power it from a separate power source. The prototype used a relay, new version turns pump on via transistor. To target product easier I added a laser pointer. I taped switch with electrical tape, so it’s continuously turned on. Then I broke the circuit between batteries and the cap and brought the wires out to be switched via transistor.

Two connected servos allow to control the direction of the nozzle (up, down, left, right). Servos work at 5V and are controlled via microcontroller using Arduino Servo library. 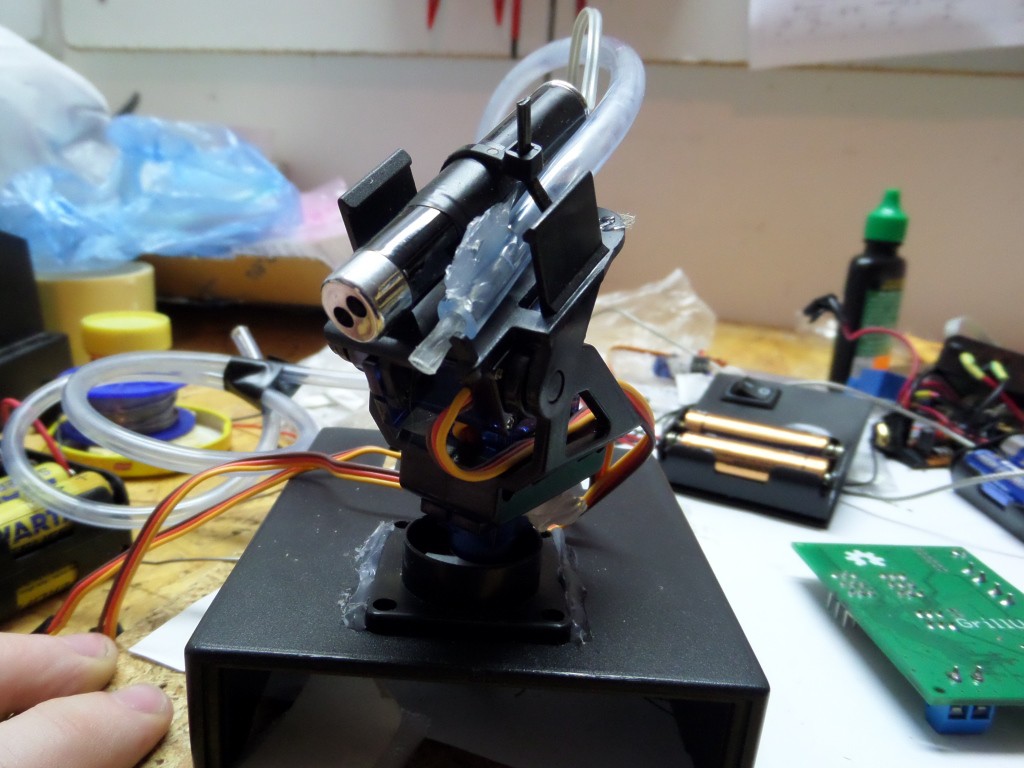 I wrote an Android application, which is based on  BLE example provided by Google and an Instructable made by danasf  (also using HM-10 module). 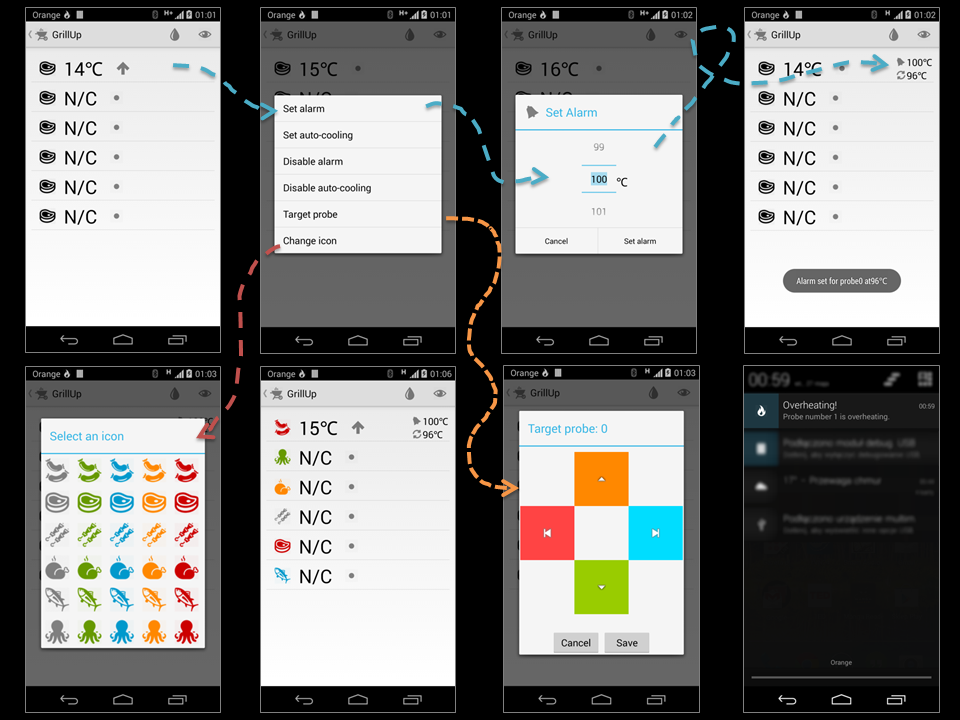 As I receive parts I will start putting together final version of this device. Expect frequent updates and many bugs. I will also upload project files, Arduino code etc.

By the end of August I would like to record and upload short clip of the device in action.

Awesome project! Automating food preparation is the wave of the future. There will come a day when McDonald's put the pen to paper and an automated Big Mac machine will be cheaper (in present value terms) than the labor to assemble the burger.

kobayashison wrote 09/05/2014 at 18:01 • point
What about an infrared thermometer than the probes? Maybe with a simple algorithm to scan the targets in a smart way, infering the curve of heating of each one... Scaling up with the targets wouldn't be a problem!

nerwal wrote 09/07/2014 at 16:37 • point
I started this project as simple 1-probe thermometer, which got later expanded to 6 probes as there are 6 analog inputs on Arduino. I considered IR briefly, however while grilling you need to read internal temperature, not the surface temperature. Besides, I was afraid of accuracy of the long distance measurement with heated air around and possibly smoke.
Now that I already have pan & tilt mechanism, adding IR sensor or even trying line-by-line thermal imaging is something I definitely want to try.
Sadly, I started my internship last week (also season is almost over), so there probably won't be any major updates until Spring :(

Sebastian Eichmann wrote 08/20/2014 at 10:48 • point
Hi, could you upload your arduino program? I use the same bluetooth module in my project.

Sebastian Eichmann wrote 08/20/2014 at 13:29 • point
Thank you, grab a skull! You should really film how your device performs with BBQ, it could move your project few pages up on the list. @my project - I'm aiming for next edition.

Sean wrote 08/09/2014 at 16:02 • point
This is an interesting take on the problem. I'm working on a similar project but by using a pid controller to control the air intake of my grill. My use case is for smoking so I'm working in the 100C temperature range.

The 2016 Hackaday Prize
Messuring water temperature with ds18b20. Sending it all to thingspeak.
Project Owner Contributor