Jump start your consumer and electronic designs with TI's solutions.

Captain Pugsley has a mission to make sure who's home. He's a small device connected over your home wifi network that notifies you when there's motion. From the iPhone app you can then give further commands such as continuing giving reports for motion or turning off further alerts.

There are a lot of PIR sensors, connected and not. Some have further functionality such as taking photos. They all are fairly technical or boring though, Captain Pugsley takes care of all the technical details under the hood and gives the user a delightful interface. 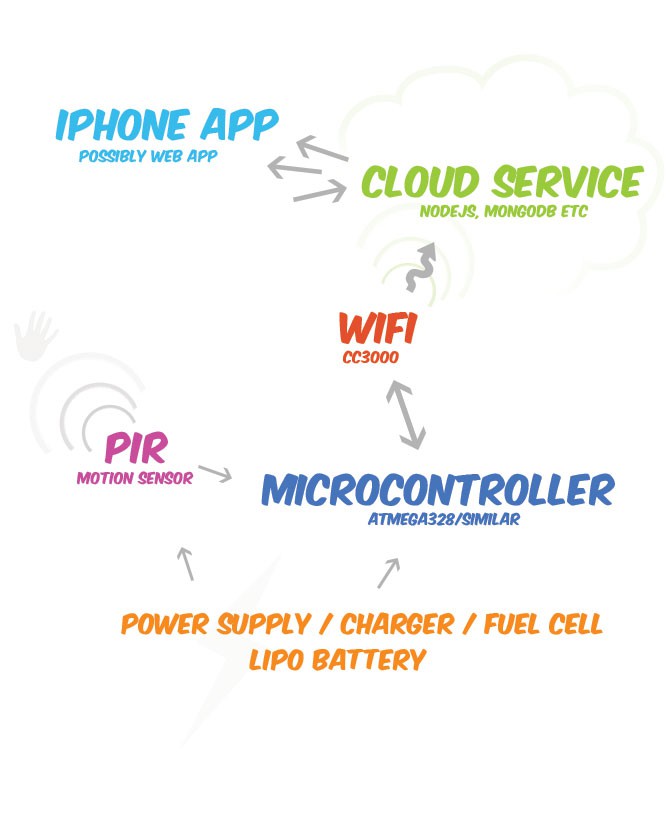 Captain Pugsley has quite a stressful job so he'll try to sleep as much as possible, conserving previous resources (battery). Motion detected by the PIR will trigger an interrupt that wakes up the mcu to try to determine if it was a false alarm or not (settings can probably be adjusted from app). If somebody's there it'll send a push notification to the app. Ideally it'd try to determine if this person is allowed or not too but it looks like we can't access the ARP tables on the CC3000 to determine other devices on the network. I'll have to figure something out here.

In between there's the command center online to act as the bridge between the app and the device. This will most likely be based on nodejs, express, mongodb etc. It will log past events so the app can show them any time even if Captain Pugsley is sleeping.

@Roeland Kindt Yeah i think nRF24L01 would work great but my whole idea was not to have something else to receive the signals. With wifi i have an easy connection to send push notifications to my phone directly. Perhaps overkill but i was curious to try the CC3000 (and now will never use it again..)

Hi,
I am wondeirng wouldnt you make it around nRF24L01, the processor is capable of doing most of the heavy lifting. You would only need to create a pcb for the PIR sensor and the battery checking.

Tomas Holmqvist wrote 08/21/2014 at 20:23 • point
Hey, nice. I used something similar (commercial hw) when in school. I implemented a tracker on a network of those things. Although the primary function of localization didn't really get that accurate. https://www.nada.kth.se/utbildning/grukth/exjobb/rapportlistor/2006/rapporter06/holmqvist_tomas_06007.pdf

A Wi-Fi-enabled power supply in AA-battery form factor. Originally designed for sex toys but has the potential for so much more!
Project Owner Contributor