Development of an intelligent rainwater collection and irrigation system.

I've been wanting to grow a garden for almost a year since I moved into the home with this tract of beautiful fertile land. However, considering my busy work schedule, I didn't feel comfortable knowing my poor veggies would be relying on my half-asleep and sometimes late-waking self to provide a proper watering. I started designing a rain water collection and automated irrigation system during the winter of 2011/12.

The design I settled on is comprised of three barrel plugs and a single 3-lead audio plug (float sensor, pump pressure switch sensor, temperature sensor, and rain sensor), two solid state relay-controlled electrical outlets (pump and 24v valve), and a blue LED next to each outlet to signal the outlet is live. 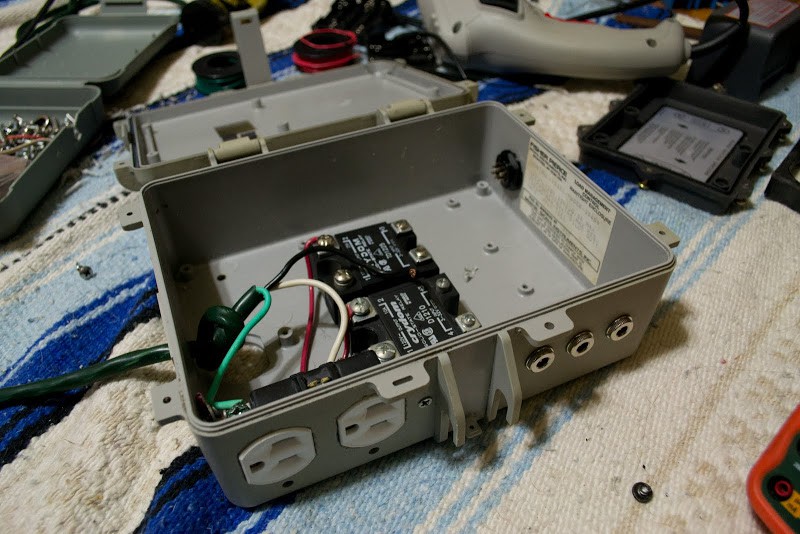 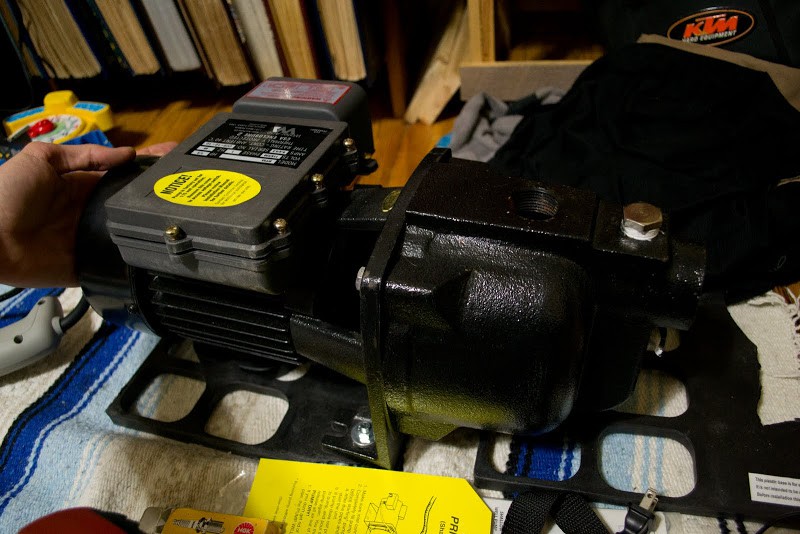 This is the 1/2 HP well pump I'll be using to transport my water from the tanks to my sprinkler head(s). The rated output is 9 GPM (gallons per minute) @ 30 or 55 PSI (pounds per square inch), and has a current rating of 8.5 amps. At 120 volts, that's 1020 watts of power consumption. If we assume my area's January 2012 electricity cost of $0.113/kWh (killowatt-hour) is the yearly average, it can be projected how much it would cost to water every day of an 8-month growing season, for 1 minute per day. 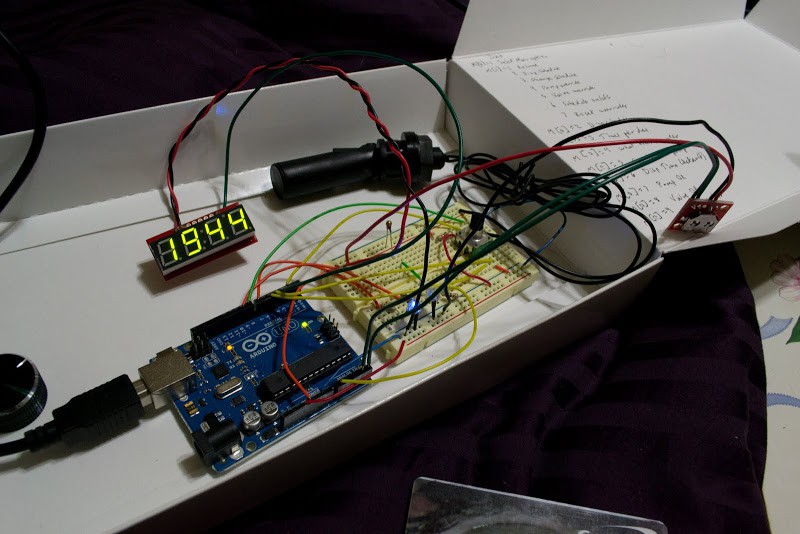 The basic operation will turn the well pump on at scheduled times. If the rain barrels begin to run low on water, the float sensor will signal the sprinkler valve to open at the house's spigot. This valve is connected to a barrel and prevents the water level from falling below the pump's intake pipe. A temperature sensor prevents the pump and valve from powering if it's too cold (or will soon be too cold) and a rain sensor will be incorporated to prevent watering while or after it's rained. 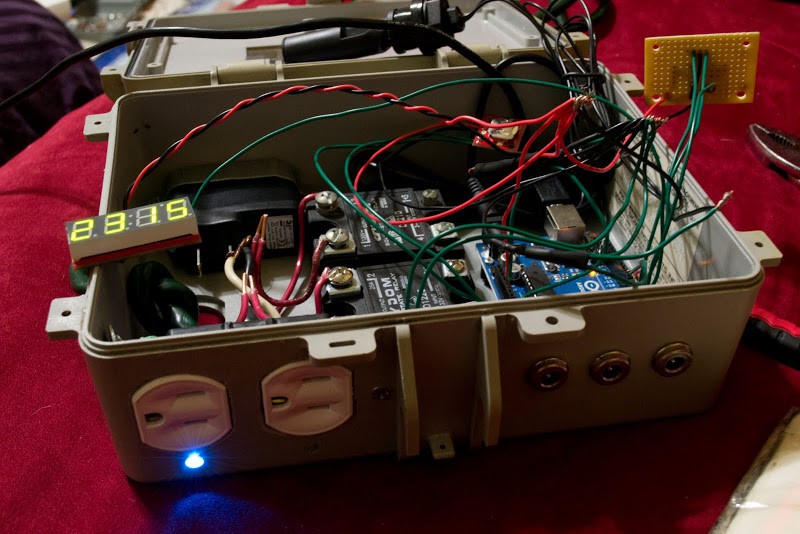 Further progress shows the rotary encoder soldered to its board and the rest of the components plugged in to test before everything is soldered and tucked in. The first test has all components properly detected and operating. 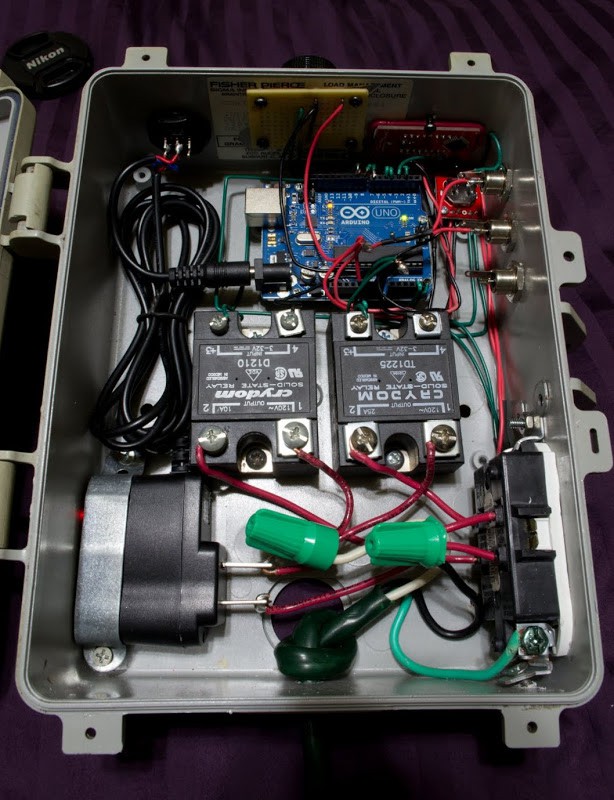 When powered, the pump relies on a pressure switch to enable and disable the current to the motor. In a situation where there is a blockage in the outflow line (debris collecting in the sprinkler, for instance), pressure may build. If the pressure exceeds ~50 psi, the switch will kill the power to the pump. If no pressure tank is installed, the line pressure quickly drops and the switch resumes powering the pump motor. In tests, the off/on cycling occurs rapidly, about 2 to 3 times per second, and if the blockage does not pass the pump may burn out. To prevent this, I used the 5.5v signal from a USB power adapter to signal from the pressure switch that power was continually being given to the pump. 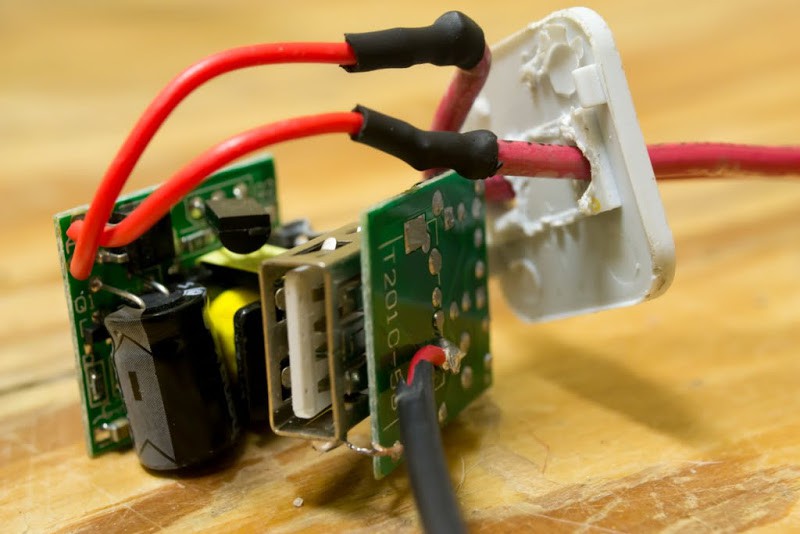 The enclosure was cracked open and wires were soldered to the 120v power leads and from the 5.5v USB leads. The enclosure was resealed with marine epoxy. The finished product can be seen protruding from the pressure switch enclosure, below. A problem appeared while testing, and it was that the charged capacitor within the USB adapter prevented the voltage drop from being detected. This was resolved with a few resistors. 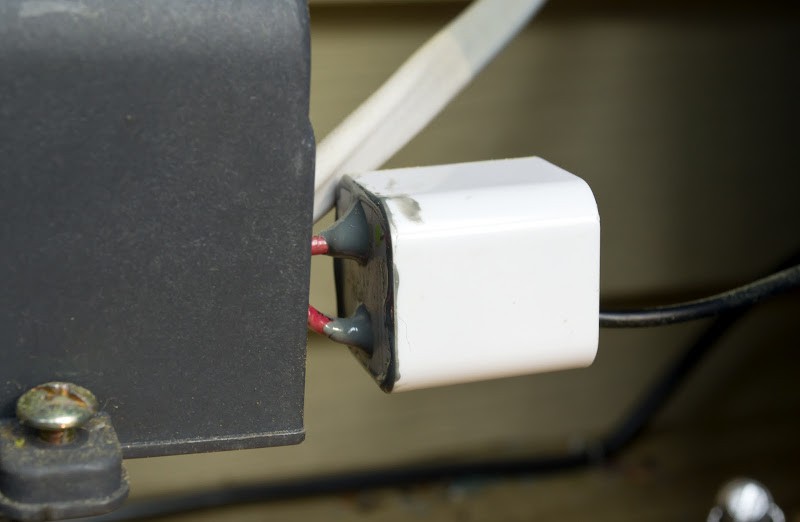 The current time & temperature will alternate on the display by default. If the colon is blinking when the time is displayed, the schedule is on. If the colon is not blinking and stays solid, the schedule is turned off. While the time & temperature is being displayed. The knob can be pressed to activate the control menu. Turn the knob to change a value, then press to confirm the value.

1: Exit the control menu and return to displaying the current time.

2: Display schedule(s) in the format: start time, duration on, days between running, next run day (1=Mon...7=Sun).

D: "#d x" #: Which schedule, x: how many days between running the schedule.

The 2015 Hackaday Prize
An attempt to recycle the water wasted during the warm-up period at the start of a shower.
Project Owner Contributor

A master bathroom used a Lange circulator pump to keep hot water at the sink. When it recently broke, I revived it... with a 555 timer!
Project Owner Contributor