how i'm building my fishroom (aquariums), and what i do to automate it and make it smart.

A quick post on humidity sensors here. I was reading this HAD article on Statistics (great reading by the way), and noticed the use of DHT11 humidity sensors. DHT11 are worse sensors than DHT22, and to speak frankly, the DHT22 is already quite crappy to begin with.

Why is that? first of all, it's communication protocol is something weird that you'll use only for this sensor, unlike 1wire that is used by multiple sensors (ok, in all honesty, we use it almost only for DS18B20 temperature probes, but other stuff exists, and at least there are cool things with this protocol, such as unique adresses, the fact that it's a bus and uses up only one GPIO for whatever number of sensors, etc...) or I2C that is used by loads of sensors.

Why does it matter? Well if you design a board for some application, and you have somewhere to put I2C devices, you can reuse it for other applications. On my ESP8266 breakout board, i did put KF2510 connectors with 4 pins, for I2C (VCC, GND, SDA and SCL), and i use the same boards for loads of projects.

With a DHT11/22, you have to put the pull up resistor between vcc and data for each connector, meaning that you can't use it for something else that doesn't require a pull-up, or require another resistor value.

Another problem with this sensor is that it has low accuracy and low resolution. Perhaps i've always gotten bad ones, but two sensors rarely return the same value in the same environement (several °C of difference, and 5-20% of humidity difference....).

What is the final nail in the coffin of those sensors is the cost of good quality sensors : the BME280, made by bosh (at least we know from where it comes from, as well as have access to ONE comprehensive datasheet) costs 2€ on a cool little breadboard that works out of the box on many µCs or systems.

On top of that, you add a good temperature sensor, and a barometer along, all with much better resolution and accuracy. In most cases, in similar conditions my BME 280 sensors return very similar values, or pretty damn close to that. 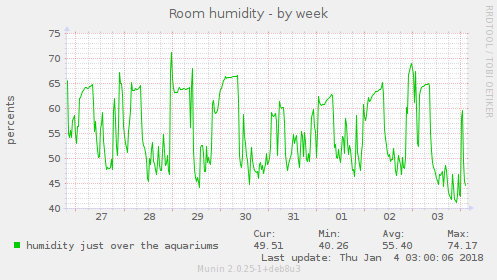