Vortex cannons are a device that fires doughnut-shaped air vortices.

Vortex cannons are a device that fires doughnut-shaped air vortices. The vortices are able travelling several metres and can be visualised using smoke. Vortex cannons have been around for a long time from large weather cannons to everyday science toy.

This project is a portable electric vortex cannon using a large woffer speaker and -12V to +600V pulse high voltage capacitor discharge circuit. I build a few home brew rat-nest inverters it turned out it was cheaper and easier and more compact to just rip the guts from an DC Mains inverter and rectify the output to charge the bank of 10 x 100uF 450V capacitors and adjust the voltage on-board voltage out to >300V and doubled to 600V.

Made some modifications - 10x 100uf 450V capacitor in series parallel for 500uF 600V. Switching from -12V with ripple noise to add a sound effect and timer to allow charging via voltage doubler to 600V. 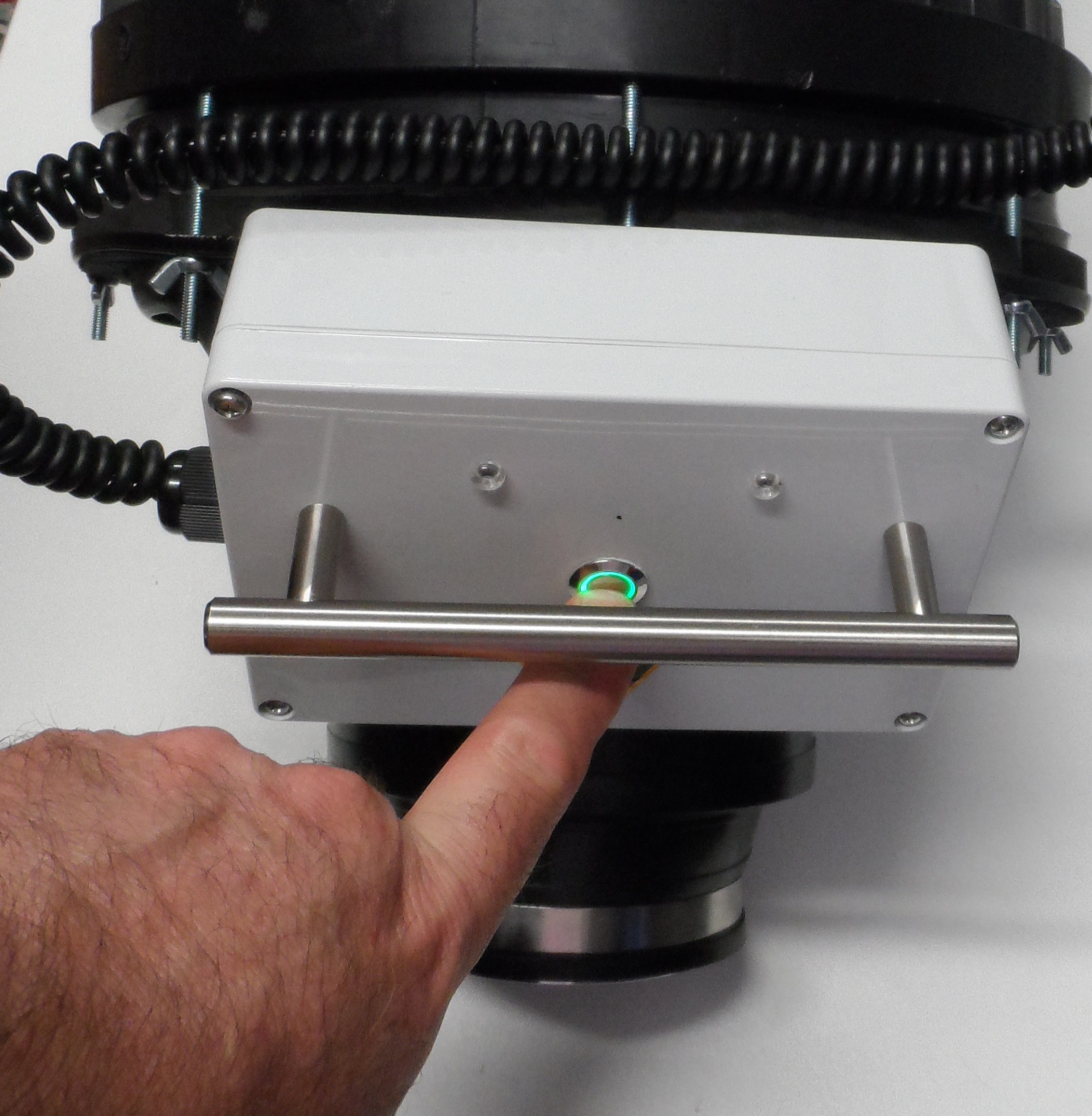 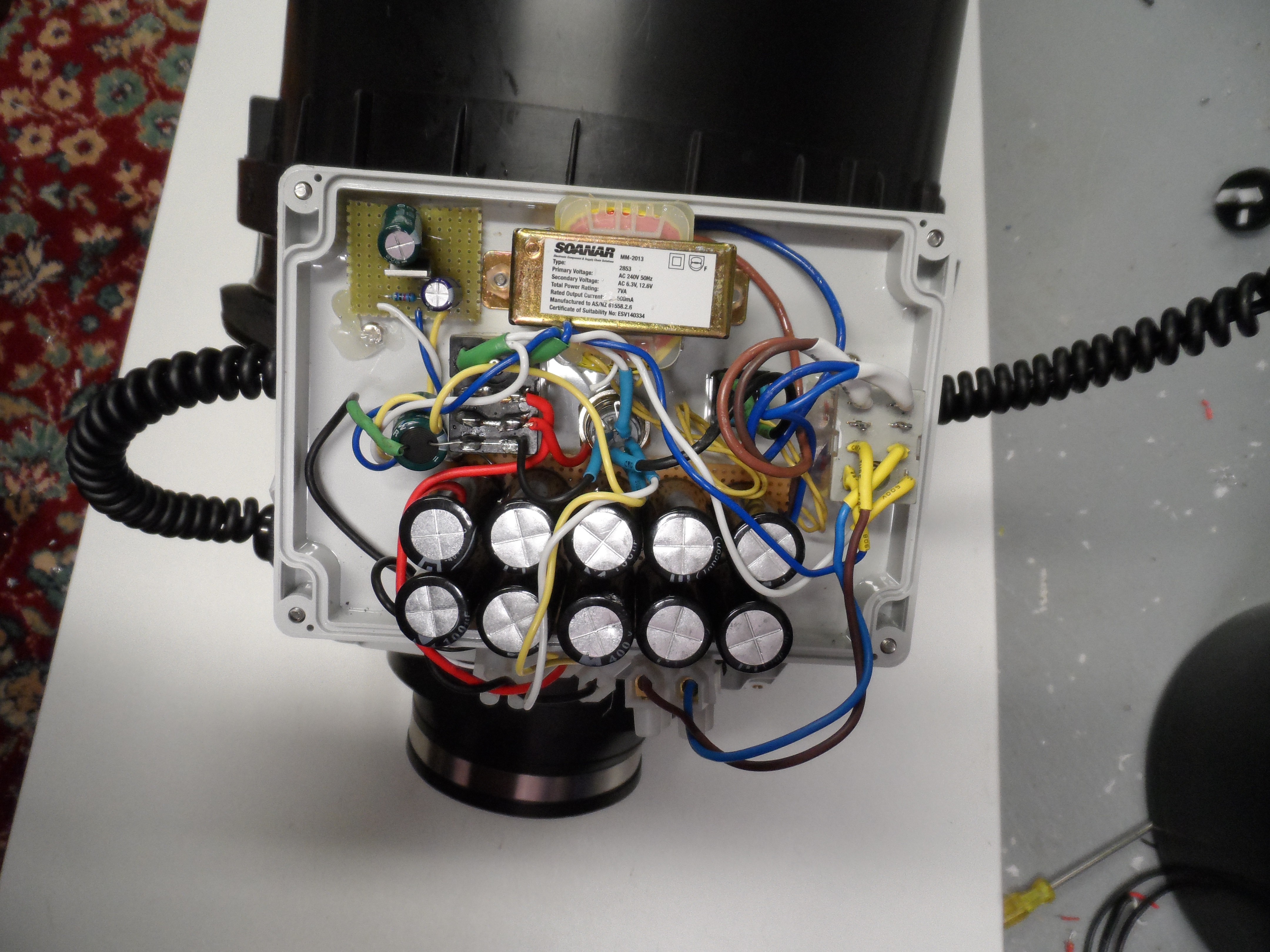 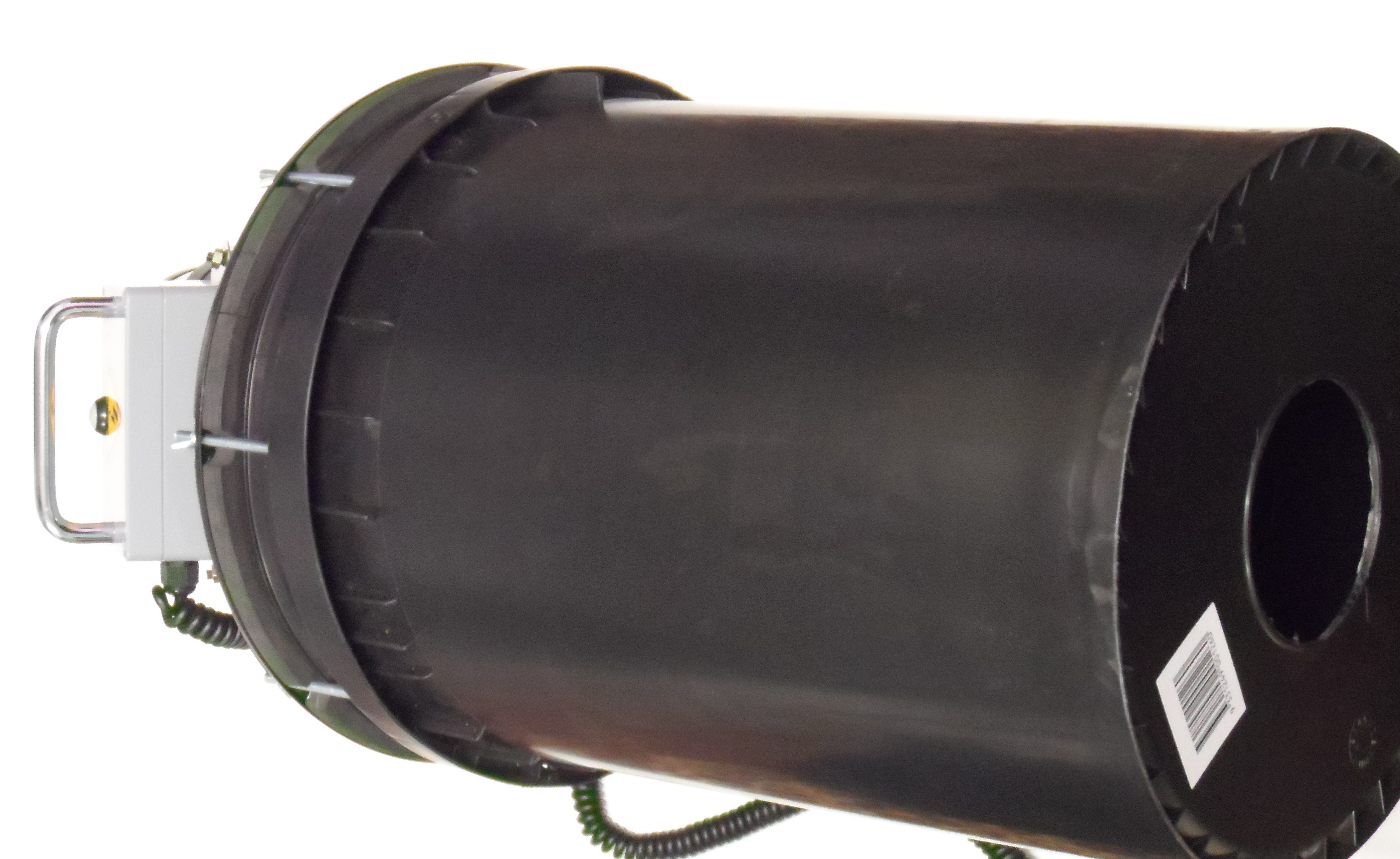 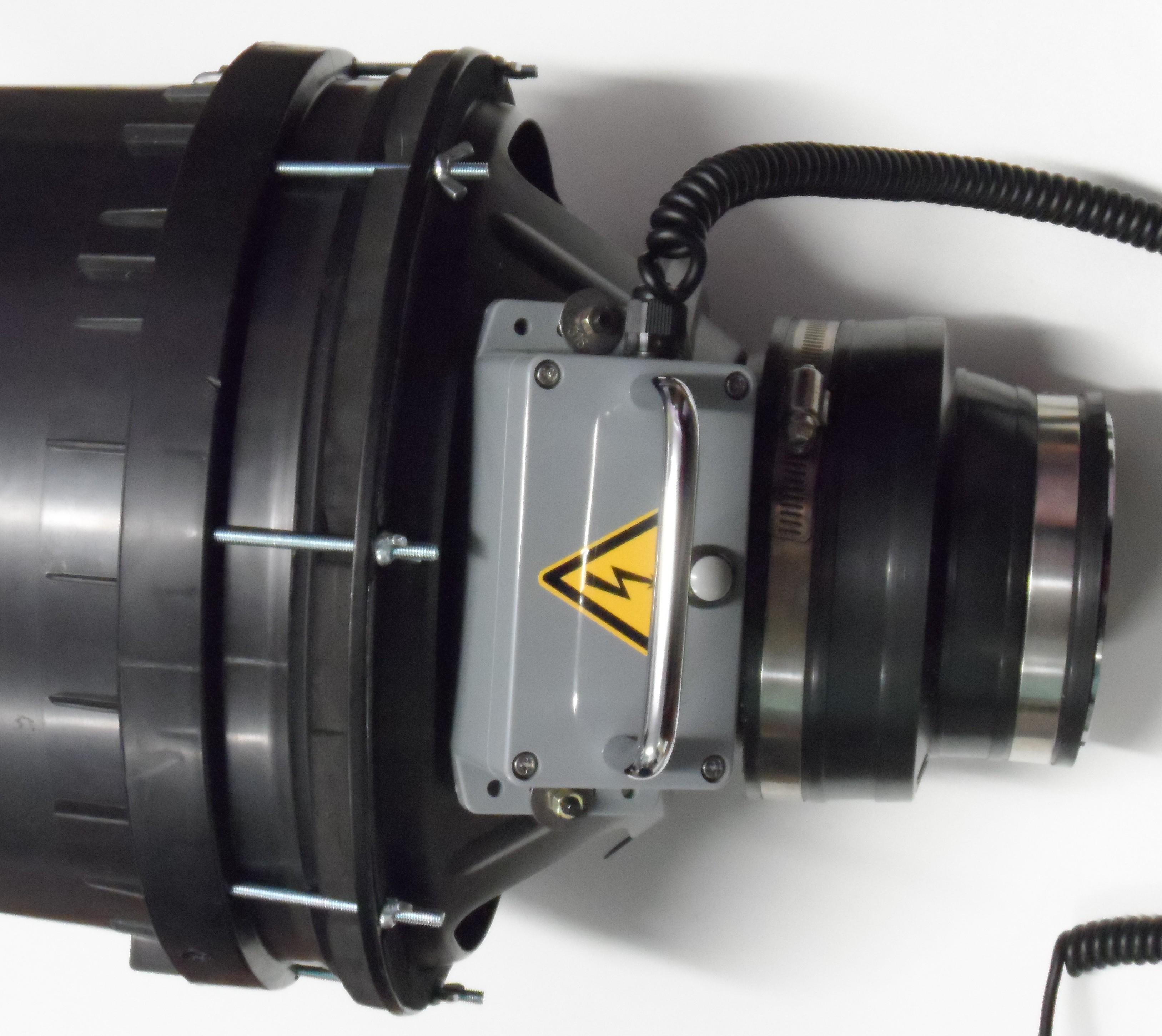 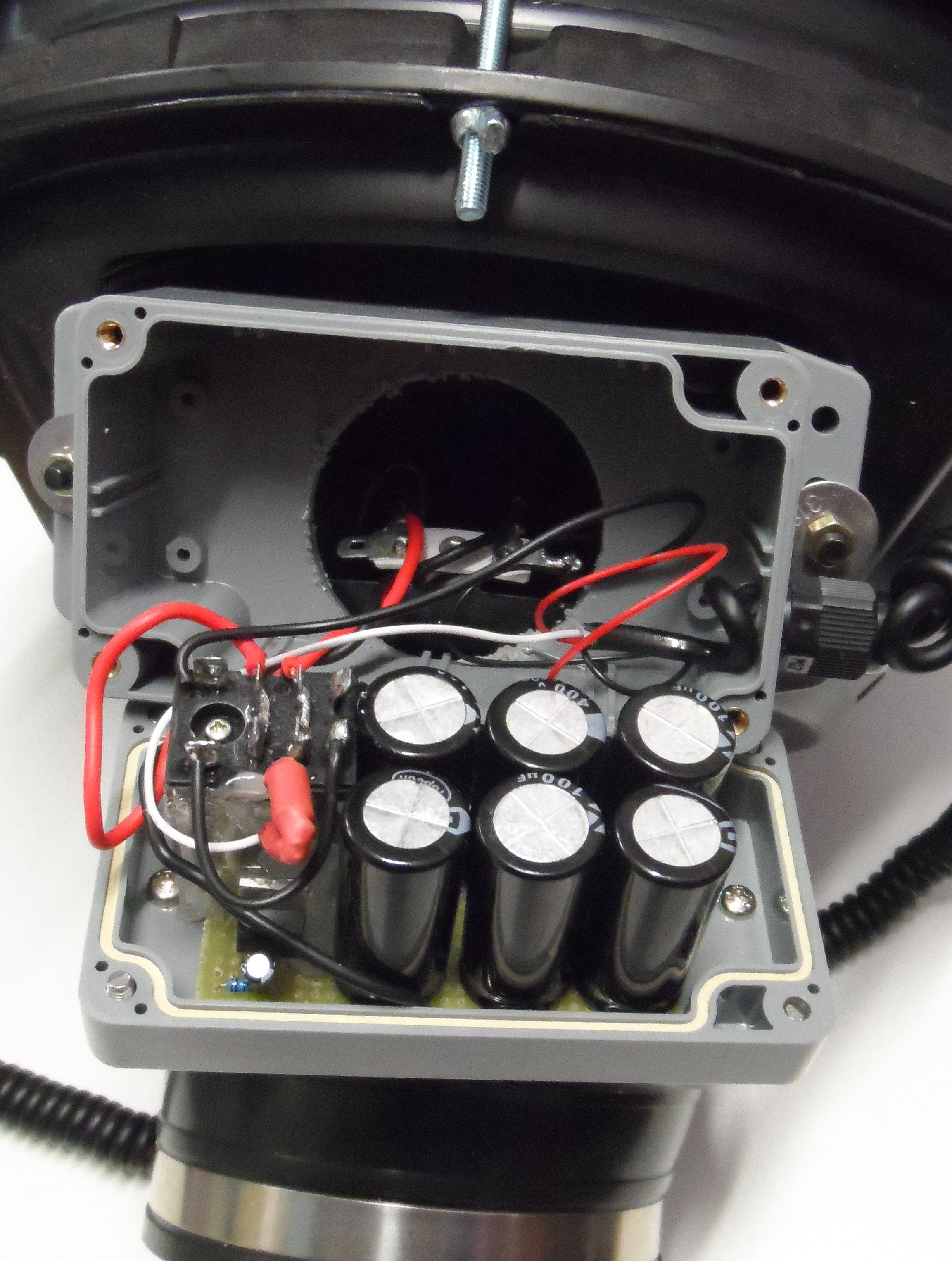 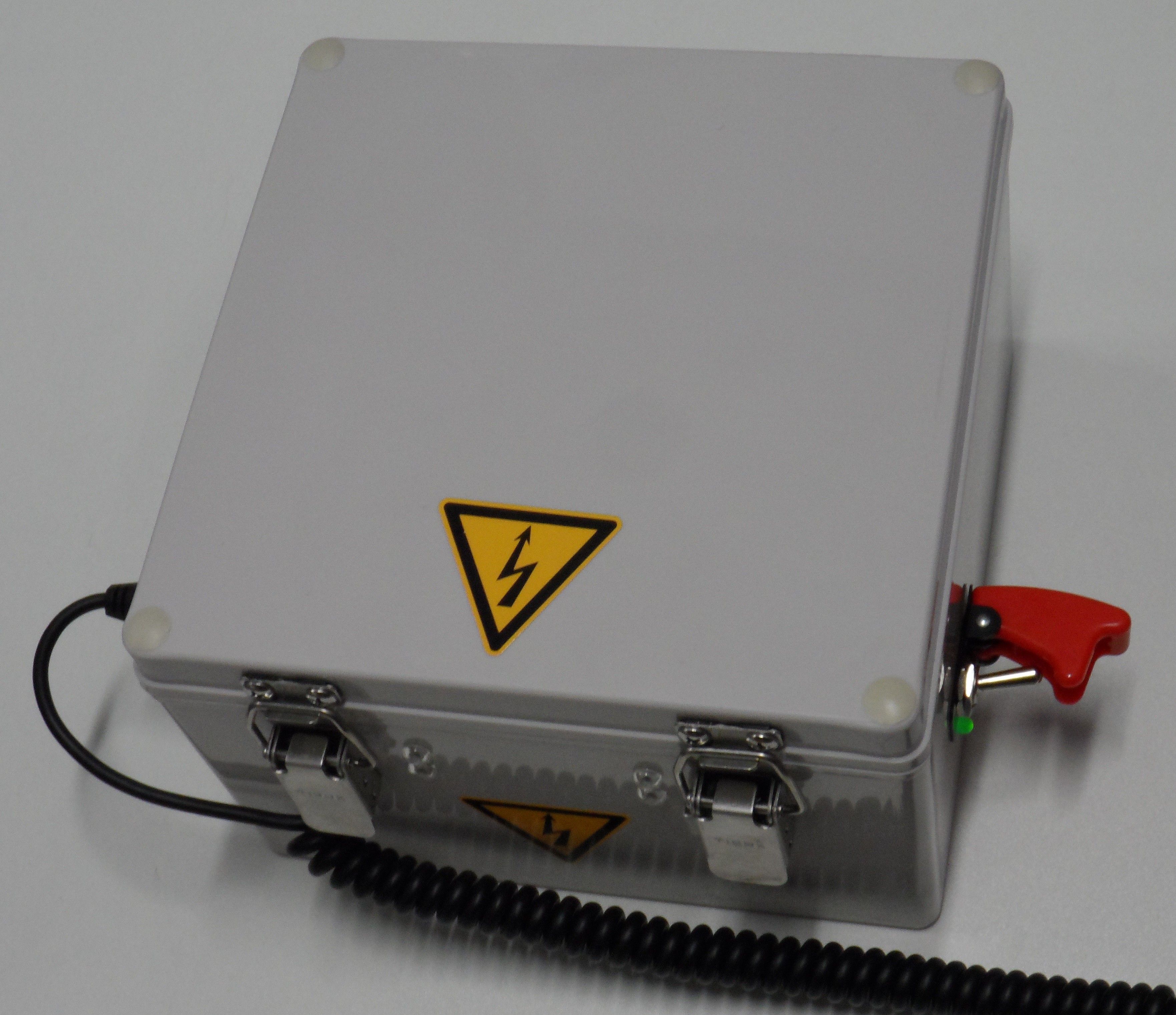 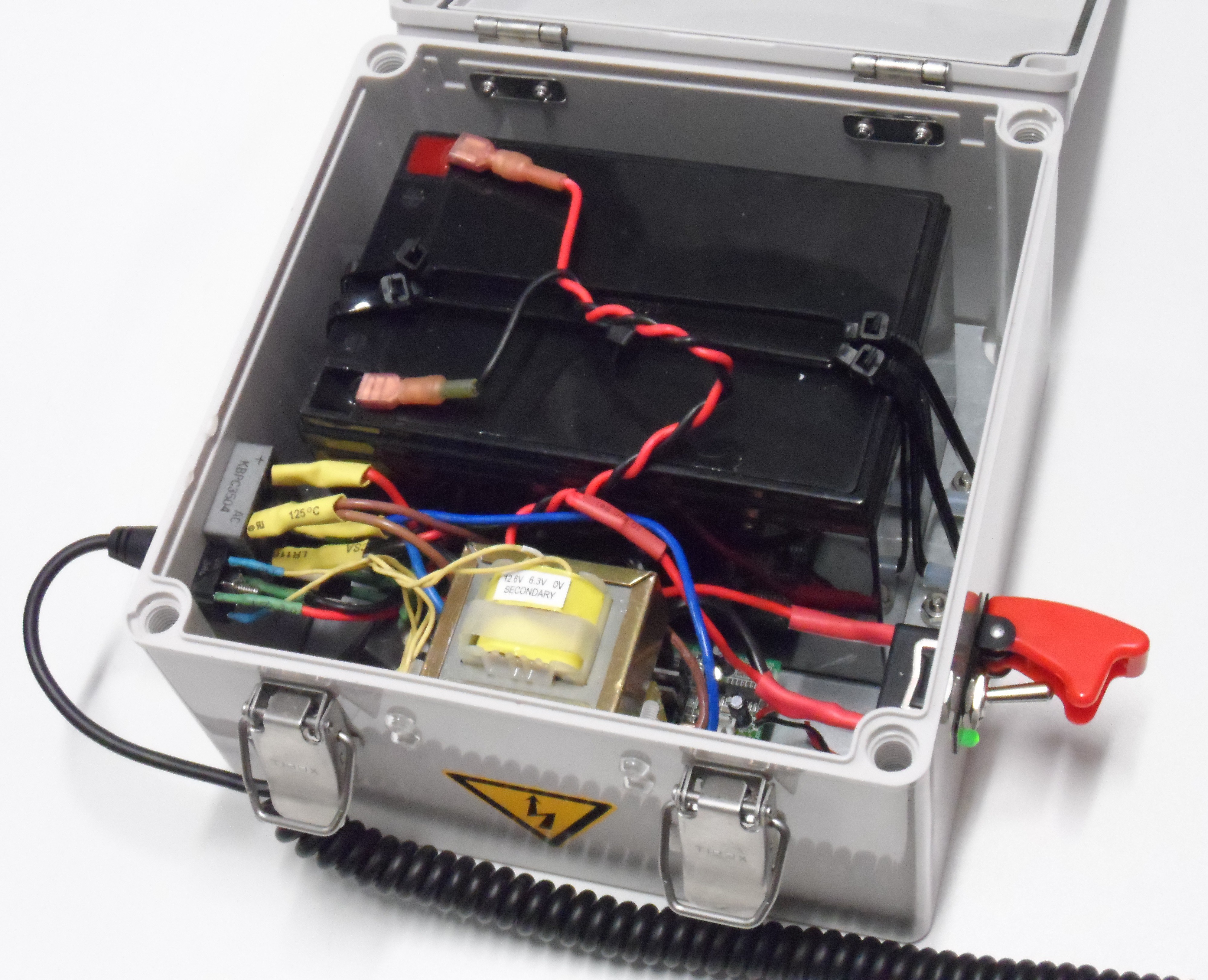 Some time ago I saw a miniature fog machine (intended for costumes or similar applications). It was the size of a pack of cigarettes and used a LiIon battery. The tank was a 5cm³ medical syringe with the plunger removed , instead there was a small rubber plug and the heater was a piece of the thin stainless capillary tubes which are used to make hypodermic needles. This was heated electrically and a tiny pump pressed the glycol/glycerol smoke fluid through the capillary tube.

This worked very nice, the only drawback was it's pricetag, around €700 to 1000,- I think the device was Swiss made.

An option for your smoke source- years ago I made one for leak checking manifold systems.  I used a quart paint can, a bunch of steel wool inside, mount a diesel glow plug through the side into the steel wool, soak the steel wool in the oil/liquid of your choice (lots of options here like glycerin, prop. glycol etc).  Apply 12VDC to the glow plug (add timer/cycle/whatever control) and out comes the smoke :)

Just an idea for a cheap, but very effective, smoke source - try ripping one of the these dirt-cheap smoke machines to pieces:

There are cheaper versions, but this one shows the internals very clearly.

Without the main casing, thermal trip and ancillary gubbins, the main pump and heater core are tiny and could be run off your inverter in small bursts. Although I suspect the 12 minutes warm-up would murder your batteries, unfortunately.

Alternatively, just build a hand-crafted version of Pete Brubaker's idea, below, using a similar pump to the fog machine pump but using a hand-rolled vaporiser core. I'm sure it can't be that difficult (ahem...famous last words...)

You might consider using an electronic cigarette vaporizer and pure vegetable glycerin for your smoke source.  Add a little pump to it, and fill the bucket with VG vapor.

Yes, I found a small battery smoke source but it looks like the air-pulse moves too quickly to form a noticeable ring.   I can knock over some cups 10 metres away, but the smoke just dissipates well before then.

Like the project and was going to write it up for the HaD blog, but then I have a few questions on the circuit.

Why the -12V inverter?  It looks like it's just driving the relay?  Couldn't you just use the battery supply to run the relay?

Is the 500/800 Ohm resistor there b/c you need to be nice to the inverter or is it preventing back-discharge off the caps?  If the latter (or either way, just to keep it from heating up) you could add in another relay there to physically disconnect the cap array from the charger before you fire it.  It's also cool to have a charge and a fire button.

Which makes me think it'd also be fun to have a "charged" indicator light.  Since the caps are at ~300VDC, you could build up a voltage divider with a 1Mohm / 10Kohm to drop the voltage down to ~3V and light up a blue LED or something.  Fire when bright.

Anyway, just wondering.  I love the speaker driving the cannon!

Hi Eliot, This design is a very dirty and lazy implementation and agree with your recommendations, given a little more time I'll add features, the kids love it, but it is a little electrically lethal inside, and needs some safety features.  It really just started out as a proof of concept, a wounder moment when I had parts and time to bother. It needs more work, but the concept is sound and works very well.  I originally used an SCR to dump the charge of the capacitors and then thought a woofer speaker is bidirectional motor and thought if the cone could be drawn backwards before firing I might get more pressure. (hence the relay and -12V). This doesn't need to be a quick acting pulse, just enough to pull the cone backwards before change over (adding a delay may improve things a little here and maybe liked to the cap charge time). Then at changeover it quickly dumps the +300V capacitors into speaker pushing the cone forward from the rear position to the front position as quickly as possible.  I also have the feeling the voltage and capacitance could be higher, but I'm just working with what is conventionality at hand, it could potentially be scaled up some more, by other makers out there may like the challenge this is open source. The important thing is that a capacitor discharge concept works quite well and opens up a whole rang of other possibilities like electronic controlled displays of line or matrix smoke buffing arrays.

The 2017 Hackaday Prize
This cell balancer will transfer electrical charges from a strong cell to a weak cell. Ideal for electric vehicles.
Project Owner Contributor

A small board to protect your speakers from unwanted DC-bias. Two N-channel mosfets are used instead of an expensive relay.
Project Owner Contributor