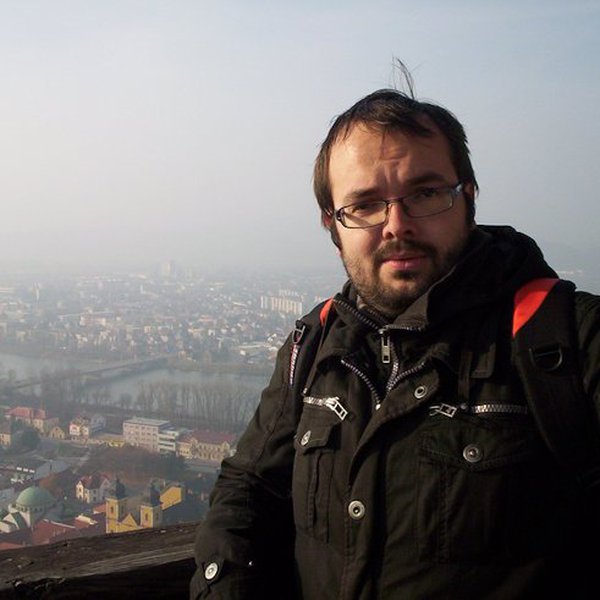 Born in 1984, fell in love with electronics when 9 years old. I started with simple analog circuits. then moved to field of audio electronics, had tiny recording studio and finally settled with MCU and programmable logic. Occasional piano player, MendelMax 1.5 owner and notorious project starter (most of them unfinished... for now...).

More (but not that much) at http://jaromir.xf.cz/

10k 58 21 54
If you have a lot of time, you can decide your position on Earth just using watches and eyes. Or RTC and LDR.
Project Owner Contributor

16.1k 3.1k 9 103
Pavapro is tiny programmer you can bring anywhere. You can load binary file into it and bring/use it as you wish. And a bit more than that.
Project Owner Contributor

32.4k 315 36 218
RetroBSD is UNIX running on PIC32 and this is a board I designed for it, evolving into tiny computer
Project Owner Contributor

I reverse engineered the PIC18 debug protocol and made portable debugger with PIC32. https://picasaweb.google.com/111890741167251011072/PICHandheldDebugger

Except of boring tasks, liek logging and computing bearing/distance to POI, this one has SD card with lots of maps, able to show position on map. More photos at https://picasaweb.google.com/111890741167251011072/GPSMapperTest1#

59.9k 325 20 263
Fun-on-a-Keychain is back, packing all your games and multiple emulators in a cute and extremely tiny handheld console.
Project Owner Contributor

17.9k 111 12 95
Do you miss those old small devices in your palm? Don't be sad, you can always build your own!
Project Owner Contributor

17.8k 212 16 165
A multimeter, based on the STM32F373, which can measure voltage, current and power (both bipolar and DC or true RMS with multiple ranges).
Project Owner Contributor

UBASIC And The Need For Speed

669 6 6 5
This is a remix of https://hackaday.io/project/28550-light-level-geolocator
Project Owner Contributor

Thank you for liking my #6802 Serial Terminal , and your projects are great !

Still sorting all those trannies and I didn't expect to discover the miniature GT109, GC503 and GC504 :-O

I don't find anything meaningful about them and I wish there were more of them because their tiny size makes me want to build stuff with them :-D I don't know what yet though.

Back in the days, they might have been used for hearing aids or even "remote sonic monitoring" I imagine :-D

Thanks for liking the https://hackaday.io/project/27939-pdp-11-simulator-under-pic32-retrobsd.

Thank you for the like on my retro futuristic automobile control panel project. I am sorry for the long delayed answer.

You're welcome, I'm very curious about the result, it looks all right for now.

Thanks for liking my #Everyman's turbomolecular pump project!

Thanks you for liking the mäqädat-bookscanner! For updates of the project status you can also visit www.bookscanner.de from time to time :)

Hey Jaromir! Thanks for the skull!

Cool, another thanks to ye!

And another! Thanks for the thought-points, as well.

Thanks for Liking my project!

Thanks much for the skull for #LiFePO4wered/Pi! Very helpful, especially now it gets me seed funding.  I appreciate it! :)

Hi Jaromir, I just want to say I really like your reviews and comments. These recommendations  really help to develop a good product. I am going to make a design change and add those current limiting resistors. I need to do a little more research on the power On reset to make a decision.

Thanks for the skull !
And congratulation for all your very nice projects !

Thank you for taking interest in my project. I hope I can keep you interested in the project as I develop it. I like what you do on Hackaday, great projects.

I love to appreciate good projects. Keep the work going, I'm very interested how it ends up.

Jaromir, you are a friggin mad man, but in the good way. Keep on hacking!

Thank you, people like you are always encouragement to bring more projects on .io page!

Skulls are most welcome!  Thanks for following my PNP project, definitely welcome feedback!

Thanks, Jasmine. Honestly, I spared champagne bottle for 1024 followers, that's nice round number ;-)

Please, upload schematics (sorry I couldn't find it) as well as pcb file and I can take a look at it. Then I'll calculate how many beers you owe me ;-)

Just download the zip file from github, it contains all Data.. V1 and V2 (to be solved ;-))

Well, I'll take a detailed look tomorrow, but now it seems like you'll have to search for a huge beer box ;-)

I looked at the schematics/board and it seems it would really need some tweaking on both of them. This is not a board riddle, but more-less redesign. I'll stick with @davedarko riddles ;-)

Okay, thank you for your elaborate opinion. ;-)

It is the same as my opinion, as it is at the moment it can't be made. I think i stick with Version 1.

Thank you for following my "Laser" project! :)

jaromir.sukuba wrote 11/17/2014 at 19:07 • point
Hello Brian. Unfortunately, I'm out of home those days (otherwise we would meet in Munich), but you can check out guys at local hackerspace - brmlab; https://brmlab.cz/
I don't know much about surpulus stores in there, but honestly, my knowledge about Prague is quite limited. I'm sure guys at brmlab could be more helpful.

Enjoy your visit in Prague.

Create your Hackaday.io profile like jaromir.sukuba and many others