Though technology gets cheaper by the day, the prices of health-related tech haven't seen drastic changes in the last years. While I do understand that there is a lot involved in developing live-supporting devices, I feel that there's lots of room to increase affordability in the field.
Current prosthetics don't fall short, either. Current bionic replacements for upper- and lower-extremity amputees can cost several hundreds of dollars. Living in the third world, it's clear to me that such devices simply can't reach all of those who need them.
As many other Makers already, I wish to change this situation, even if by the tiniest bit.

This project (biohand) aims to develop a cheap (around the U$300 mark) prosthetic hand, that is 3D printable, and uses affordable and easy-to-find components.

Still actively on the making!

I live in Brazil. Here - unfortunately - lots of components are expensive or hard to get. This constrained a lot of design choices, a few of which are presented below.

Also, I tried my best to use solely open-source development tools (or, in worst cases, free-of-charge ones).

I just finished my thesis on the biohand. The project is thoroughly detailed there, with relevant steps in mechanism synthesis, electronics design, software structure and prototype assembly. Check it out! :)

Each finger is actuated individually, and relies on a 4-bar linkage mechanism to synchronize the movement of the proximal and distal phalanges (see picture below). The actuator is fully enclosed in the palm, to guarantee that even patients with wrist disarticulation or transradial amputation can use it.

Lots of thought went in the choice of the actuator itself. 'Proper' DC motors (eg. Maxon or Faulhaber) are generally too expensive for this application; same goes for linear actuators. Chinese DC motors with enough torque and decent reductions are hard to find and may easily be discontinued - a danger for any design.

I've noticed that standard RC servos, on the other hand, are available *pretty much* anywhere in the world, and its internals (specially regarding mechanics) are roughly the same across a wide range of manufacturers. With that in mind, I used the DC motor and two gears of a standard metal RC servo to design a 3D printable linear actuator. A standard 25mm M3 screw acts as a leadscrew. 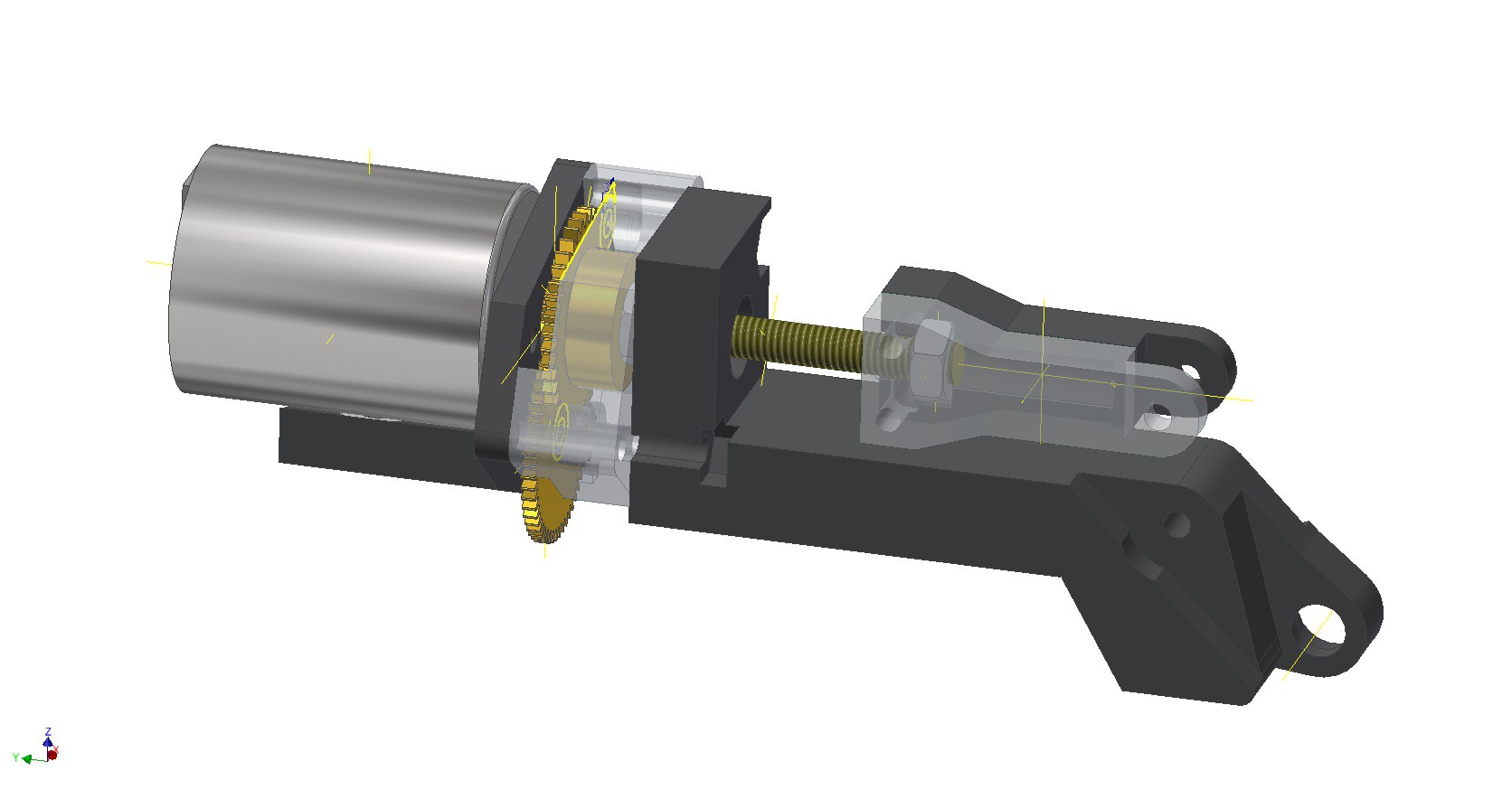 While it looks flimsy, it was able to lift 1kg. On top of that, the servo's potentiometer is used to supply feedback about the finger's position - something hardly available in commercial-grade hand prosthetics. The long screws in the servo's enclosure can also be used as dowels for the joints.

The thumb, uses a common arrangement with 2 degrees of freedom, with a linear actuator moving the first metacarpal joint, and a micro-servo driving a rotary motion for the carpometacarpal joint.

Lastly, I designed all the finger's parts in such a way that they're printable laying flat on the printbed. The part's orientation during print is of great relevance in its final strength. With this setup, the assembled finger mechanism was able to individually hold 2kg in a non-destructive test.

The prototype still doesn't feature aesthetic covers (yet to come!), and it's being assembled.

The mechanical designs were made using Autodesk Inventor. While the program isn't open-source, 3-year Pro licenses are supplied for students. I'm considering moving to Onshape in a (somewhat not so) distant future.

I'll be driving the whole system off of a 2S LiPo battery. The thumb's micro servo is getting a proper regulator (an LM317 or an LM1117). The DC motors are being driven with TI's DRV8801: 2A RMS current output (for real! Heard that, L298?), internal logic and an amplifier for sense current made it an easy pick.

For the processor/controller, I went with an STM32F103 ARM Cortex M3. I was already familiar with the processor, and ST's recent lineup of Discovery and Nucleo boards are a significant step for lowering the entry price for ARM development. I'm currently using an Nucleo-F103RB both as dev-board and SWD probe.

Electronics are still in its early stages. For now, I hooked up an STM32 (on a breakout board) to the SWD probe [left of the pic], and designed/milled a carrier board for the DRV8801 [right]. 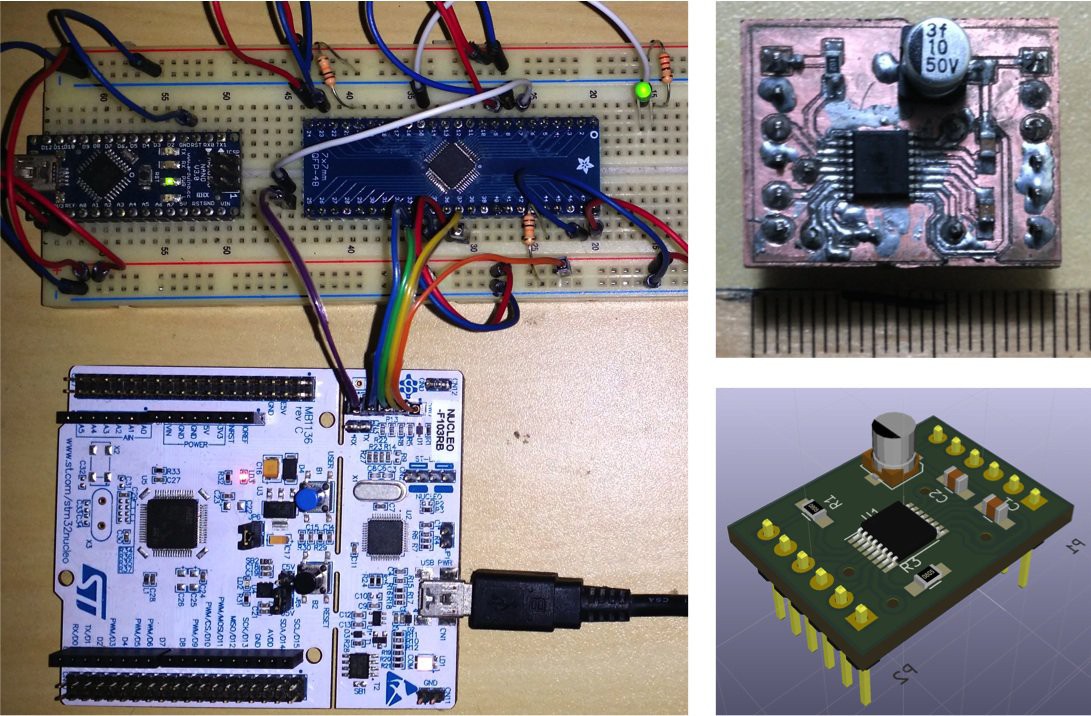 The complete board is still being designed under KiCad.

Toolchains for embedded ARM development used to cost a kidney (or be insanely hard to use). In the last years, however, many great open-source tools have become available. I'm currently using a software setup that consists of:

Since the hardware is still being actively developed, I've had little time to address proper software development. For now, I've assembled a software template that...

Do you think it would be interesting/feasible to do torque control on the joints ? (Since you are already using DC motors and not pre-made servos, the electronic would be simple)

hey man... can you at least give us the fingher files pleaseee.. i really want to recreate the hand

Do you still plan to put files on github? I would like to try your design!

Hi Frédéric! Man, sorry about that... I never quite got around uploading them. I'll take the time to do it ASAP (as more people have already asked me too :( ) and I'll let you know! Thanks for the interest :)

I am curious if there is a way to make this back-driveable while keeping the linear drive screw. Perhaps add some sort of spring or 'suspension system' to the linear drive screw? this would give the power saving benefit of the drive screw (since the motors do not need to constantly run), but also allow some flexibility if the fingers bump something hard.

Just a suggestion. Love your project!

Instead of 3D printing each finger, it would be interesting if you 3D printed just the bone structure and put a rubbery/fleshy material over the bones, more like an actual hand.

Hey! First off, thanks for the interest in the project, it means a lot to me :) Sorry for the long reply time!

Regarding the linear actuation, I put some hard thought in trying to keep it back-driveable, but I simply couldn't find any alternative that would be cheap, easy to build, strong and reliable all at the same time. For now, the 'bump-safe' is actually the fact that the structure itself isn't perfectly stiff. Specially when an impact hits the outer side of the fingers, the structure kind of bends inwards, absorbing some of the shock.

In the end, the goal is making it simple and affordable enough, so that even if something does break, you just print it out again and pop it in. But suggestions are always welcome! Thanks again =)

I would like to have the 3D files to try this myself! Great project!

I'm still working out some quirks. As soon as I have a more definitive version, I'll upload all the files and link them here. Thanks a lot for the interest! :D

The 2016 Hackaday Prize
The goal of this project is to create a standardized outdoor robotics platform, similar to the Turtlebot.
Project Owner Contributor

The 2018 Hackaday Prize
There seems to be an empty spot in the market between hobby servos and professional models - this should partially fill that gap.
Project Owner Contributor

The 2017 Hackaday Prize
An ultra strong and fast servo that is reasonably priced. The goal is to generate 60ft*lbs (11 520oz*in) with 60 rpm no load rpm speed.
Project Owner Contributor