I will examine several different methods to fabricate PCBs from Dupont Pyralux - a flexible PCB material. For these experiments I purchased AC 352500EY Pyralux from Ada Fruit. This material has 1oz copper (35um thick) layer on a 25um thick Polymide backing.

I will examine several different methods to fabricate PCBs from Dupont Pyralux - a flexible PCB material consisting of a copper layer glued to a Polymide film backing. These experiments are performed on 1oz single-sided Pyralux purchased from Ada Fruit. For reference, the copper layer is 35um thick and the Polymide backing 25um. We start by attempting to make a circuit board using a LPKF ProtoMat C60 circuit board cutter.

ProtoMat C60
I created a baseline by making different depth cuts in 1oz copper on a standard FR4 substrate. The depth limiter on the C60 is adjustable in 4um increments by turning a knurled nut. I made 10 passes, starting a 0um depth and going 20um deeper on each pass. The FR4 substrate has a less shiny appearance than the copper. From the microscope pictures (excuse the rough quality), it appears that 40um is sufficient to cut through the copper. This is pretty close to the 35um thickness of 1oz copper. In order to insure clean edges, we typically cut our PCBs to a depth of 100 - 150um depending on the quality of the cutting tool. 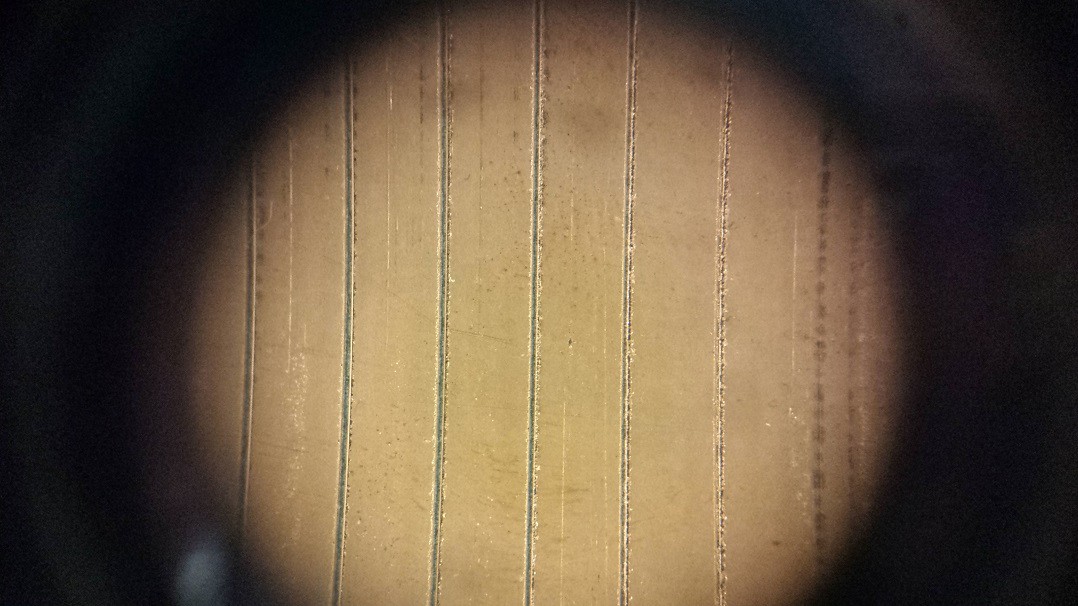 First Attempt:
With the help of hindsight, my first attempt had three problems. The spray adhesive was old and lumpy when applied to the back of the Pyralux. Second, I pressed Pyralux foil down with my fingers to attach it to the backing material. Third, the press board backing was not very rigid. The engraving was not consistent as shown in the figure below. 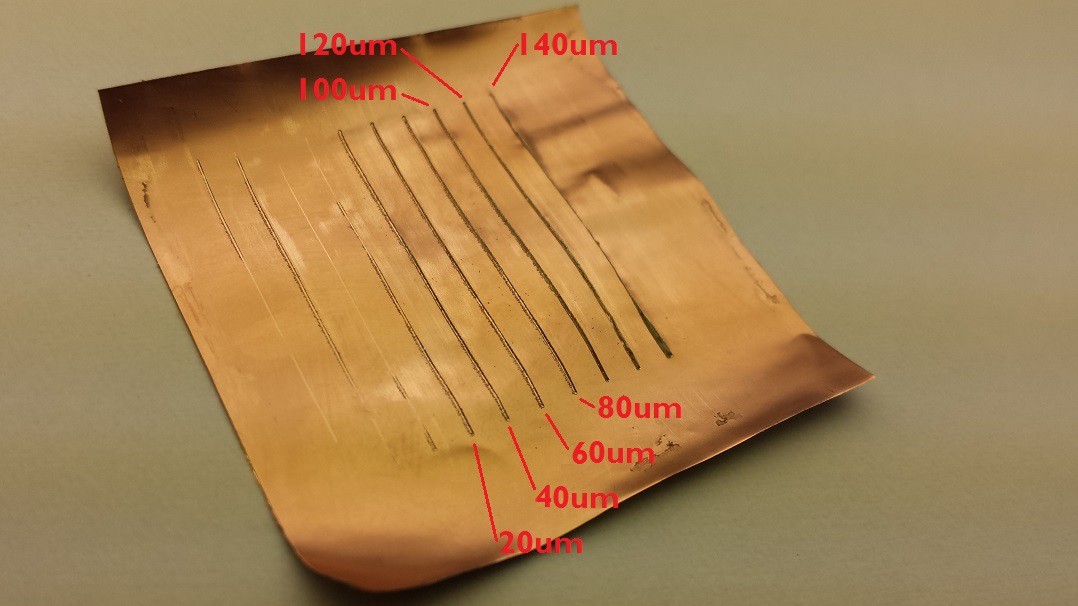 After some reflection and a visit to my local big box store, I returned with a new agenda - to attach the Pyralux as flat as possible. I accomplished this by mounting the Pyralux onto a sheet of FR4 (labeled 1 in the Figure below). I lightly sprayed one coat of the Loctite spray adhesive onto to the back of the Pyralux sample (labeled 3 in the Figure below). I then placed the glued sample onto the FR4 (labeled 4 below) and pressed the ever living hell out of it using a piece of scrap PCB material (labeled 2). 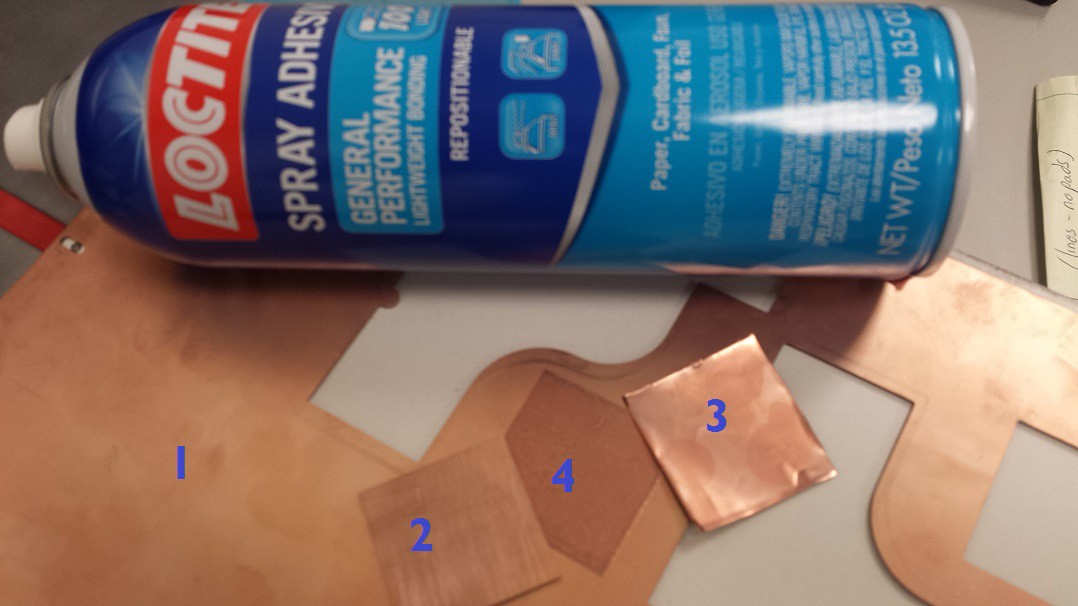 I proceeded to make 10 different depth cuts starting at 0um depth and going 20um deeper on each pass. This setup resulted in much more consistent results then my first trials. The image below is taken through the eye-piece of our microscope. The 40 and 60um deep cuts have a dull brown streak down the center; the same color as the Polymide backing. The Polymide was cut completely through on all cuts beyond 60um. The dark brown streak in the cuts deeper then 120um is the fiberglass core of the FR4 used as the underlayment to the Polymide. 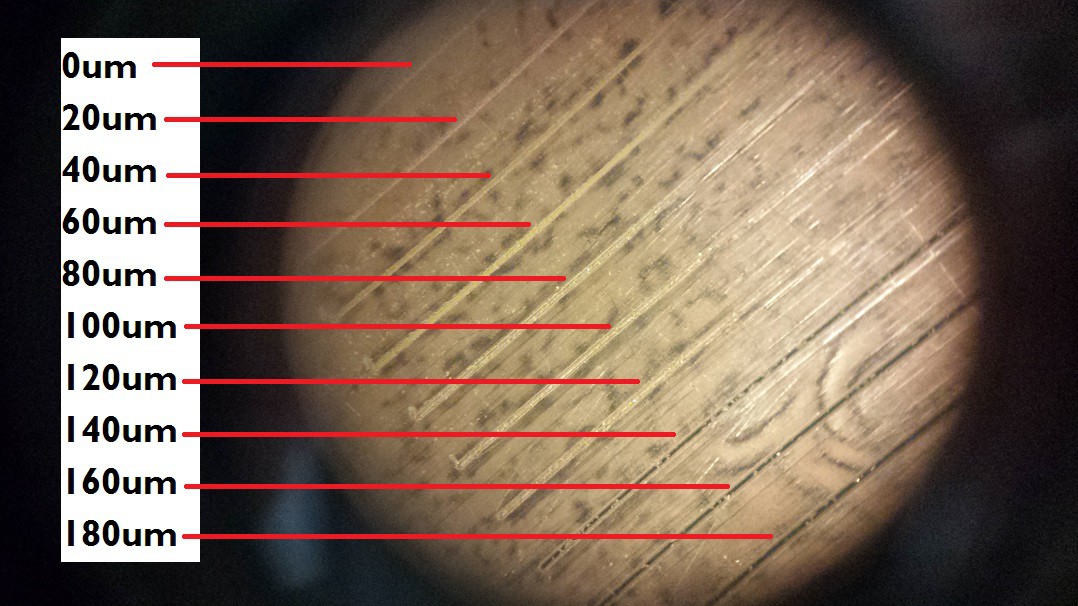 The following figure shows the Pyralux partially peeled away from the raw FR4 sheet. This clearly illustrates that cuts deeper than 60um will penetrate all the way through the Pyralux. this should not come as a surprise as the Pyralux is a total of 60um thick. 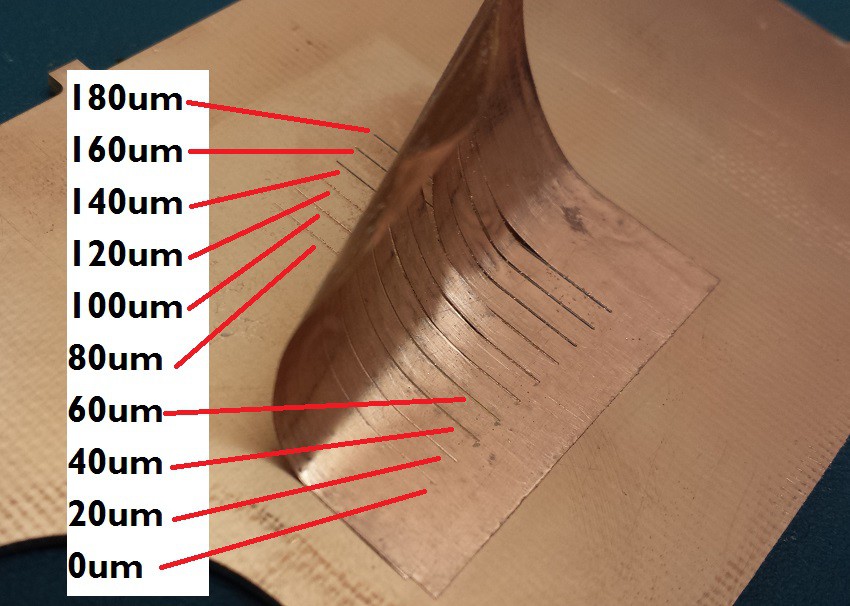 To test if this methods was practical, I cut the following "circuit board". This pattern stressed the Pyralux in all directions as the C60 cutting head worked its way around the spiral. I wanted to make a double sided board - the reasons will be made clear in a follow-up posted. So I made a second identical sheet to attach to the first. I made a big mistake by not recalibrating the depth of the cutting head. During the first pass the cutting head was not deep enough and just pressed on the copper, but did not effectively cut through it. This caused inconsistent cutting on the second pass - I would have done better to just throw out that Pyralux sample. With a little touching up with an Exacto Knife, I was able to repair the second board. I took some time to get the two boards to align. The spray adhesive was sufficient to keep them bonded. The following figure shows the result. 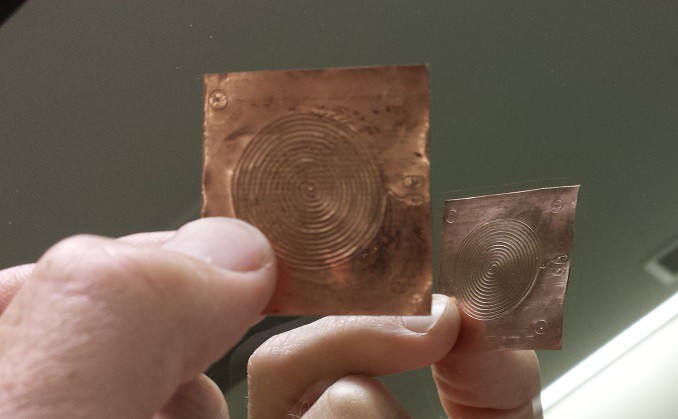 I will come back later and make a post about that I am going to do with this board. But first, I have a couple of novel ideas on how to chemically etch the Pyralux. So stay tuned - I'll be posting early next week.

I have been working two fronts on this project. First building the etching tank. This is turning out to be a pain in the ass...

Do you think I can engrave pyralux with this machine?

http://knkusa.com/product/knk-zing-air/
I am going to get pyralux delivered next week so I will try it myself by then.
I have this machine and use it a lot to engrave touch overlays from ITO PET film with %100 consistency.
They have 0.5mm pitch connectors with 0.35mm trace widths. Actual width should more like 0.2mm because of the engraving tip width.|
I have even used this machine to plot PCB's on paper using silver ink.

So, if you had an 8 1/2 x 11" sheet of this, could you print toner from a laser printer directly onto it? it would eliminate a step in the toner transfer etching method.

Good work so far. I like your detailed test methods.

From what I have heard the laser printers rely on building a local charge on the paper surface to get the toner to transfer.  By its nature Pyralux would quickly dissipate that charge.  Perhaps a ink jet would have better luck?

I am going to put together a chemical etching tank next week.  I'll compare the results against this mechanical etching process.  I have an novel idea to create the mask - its loosely based on my Kapton Mask post.

Thanks for your encouraging words - stay tuned more to follow.

I had always heard that too, but people have done it by modifying the printers-

Inkjet might work, but I think the ink would smear pretty badly. Maybe a UV curable ink of some kind would work so it could be cured immediately after it is deposited.

Brian,  thanks for the links.  I'll have to give them a good look over...

Clamp a piece of wood on the bed side of the cutter to hold the Pyrulux flat. I've come close to having my finger tips pulled into the blade. A sheet metal shear is best but the Kapton backing will grab a rotating cutting edge and deform making a mess of it.

Good idea on the bed side.  I'll give that a try when I start working with larger sheets.

I tried the office paper cutter this morning.  Its best for long cuts, but shorter pieces got pulled between the blade and base edge.  Maybe its our office cutter, or the material.  Having a second person to hold the Pyralux tight would solve the problem.

Best way I've found to cut Pyrulux is with a "guillotine" style paper cutter. Even then the Kapton is slick enough that the cut will curve if the sheet isn't securely clamped in place.

Thanks for the tip.  I'm going to try a better grade adhesive and a harder backing material and will post some follow-up.  Unfortunately, I think that the 25um Polyimide backing is going to stink-ball me no matter what.  Thanks for following!

A method to add a layer of etch resist to a PCB without toner or laser printer.
Project Owner Contributor

Save money on stencils and printing.