This is a small seven segment LED display. It fits on Atmel's ISP header which is available on most development boards and most AVR-based 'duinos. This header is normally only used for Programming, so after Programming you can plug this Diplay on the header to get an easy to use display. Beside the Hardware this project will also provide Libraries for the Arduino IDE (C++) and Atmel Studio (C).

With this you will get an easy and quick to use display for your projects. Just plug it on the the ISP header and you are ready to start start!

This projects is about an small easy to use seven segment display. The disdplay is controlled by a 8-bit shift register. Rev2 and higher displays are chainable, so you can get multi segment display. Beside the Hardware there is also a Software part in this project. This software part is shared with a very similar project ( #µ7 ), wich is very similar (shrunken down version of tny7's rev1) but to to differnt to handle it as the same project.

There is nothing special about the Hardware: on the ISP header you have access to three IOs of the micro controller. These are connected to shift-register, which drives the Leds.

The PCB should be small. So it can be used quick and easy. So I ended with this, after some hours of routing: 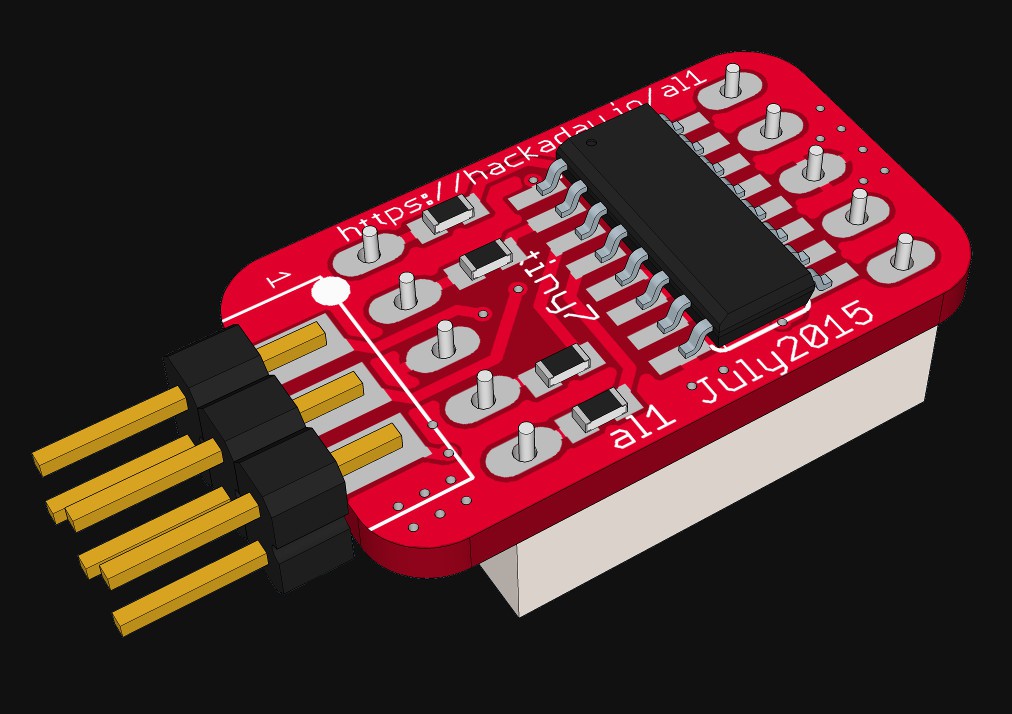 The used seven segment displays have a very clever pin out (this pin out is also very conmen, so nothing special): The common ground pin are in the middle. You can mount the display on both sides of the PCB and only the order of the segments changes. This could be reversed in software.

In the second revision two pin headers on both sides of the PCB got added. With these pin headers you can solder two (or more) PCBs together to get a two digit display. so you can create multiple digit displays. 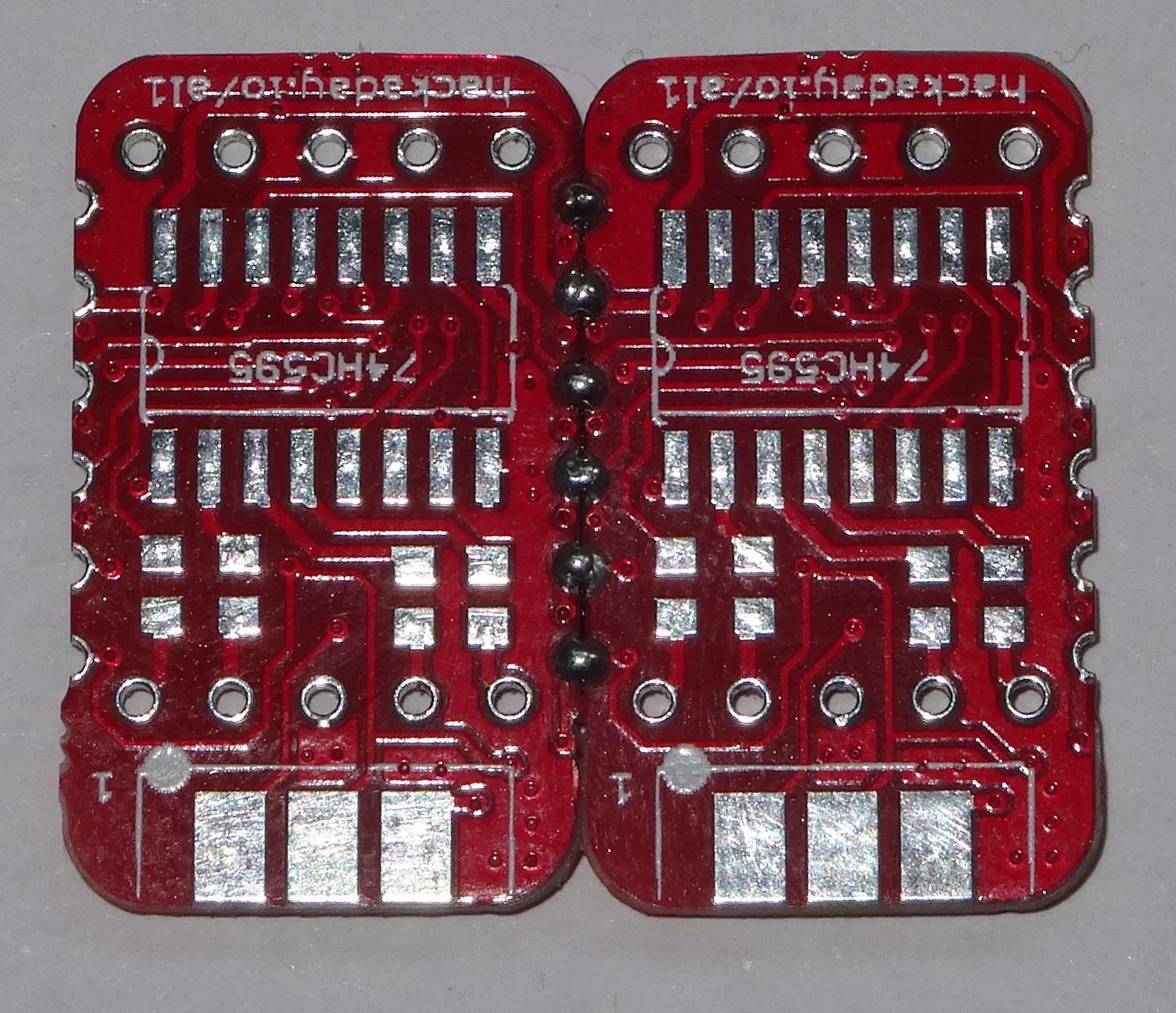 In revision 2.1 there is beside some minor changed an SMD solder jumper added. with this solder Jumper you can connect the common pins of the display to GND or Vcc. So common anode or common cathode display can be used. The library is also updated to use this option.

There is a working Arduino library available (see Bitbucket). With this you can control one or more displays. The plain C library is not ready yet.

In your setup you have to use the function .begin() this is the prototype of the function:None of the Parameters are needed if using only one tiny7, normal display mount, normal Arduino and common cathode display. So is could look like:

The other parameters of begin can be used to use for additional configuration if needed.

Now you can use your display by using the .print() function. For example like this:

There is also an .printf() Function availible. This is very usefull for display values with an unit on bigger displays. For example you can do this: 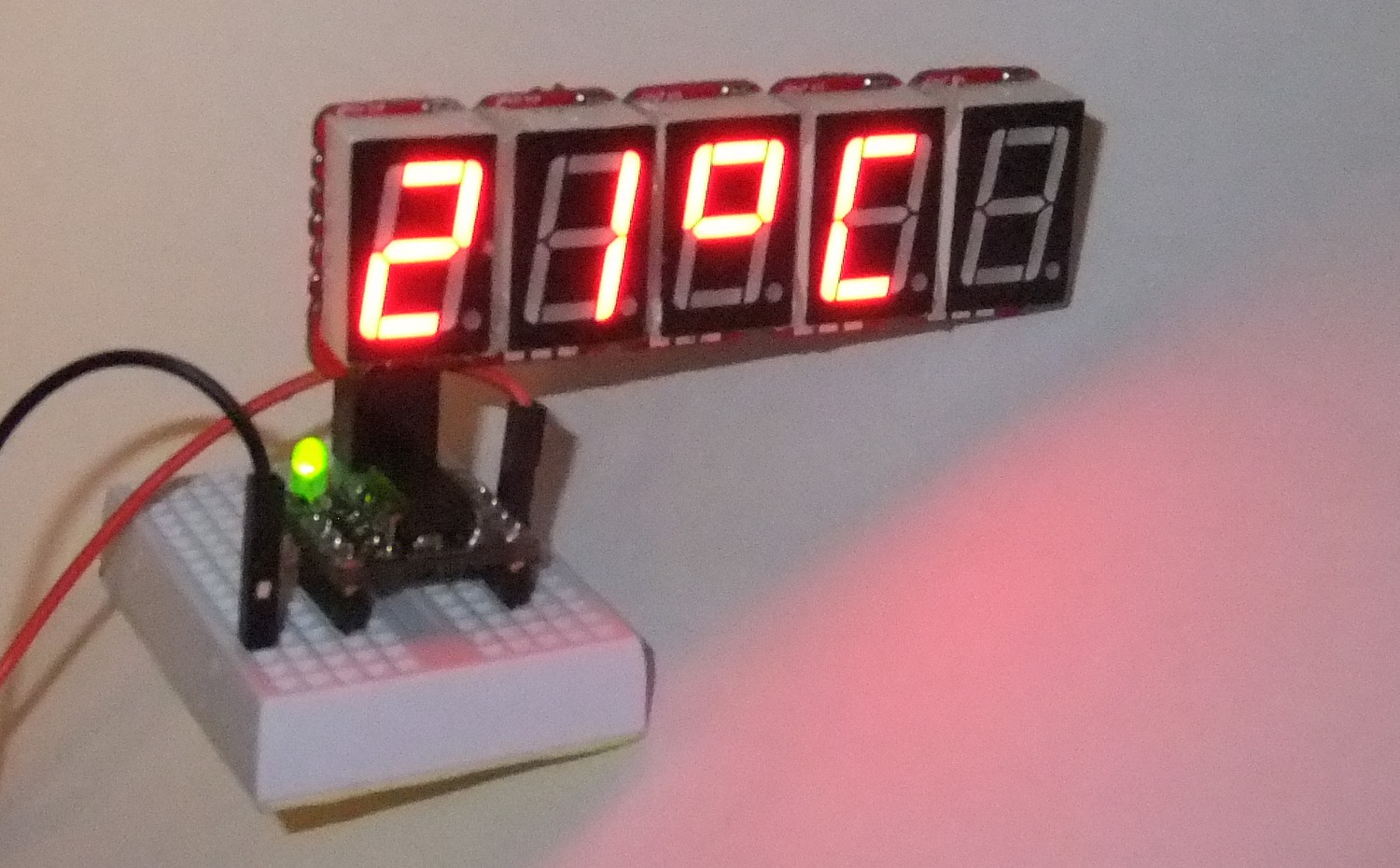 with this function call:

More examples can be found in the library!

I did test test the library and the tiny7 with the following devices:

It should work on all board which are using the Arduino IDE. The pins used by the tiny7 library can be changed in the .begin() function.

First I would like to thank to everyone who write comment, following this project or gave a skull. Specially @Stefan Lochbrunner who had the idea of dais chain multiple displays.

I would also thanks @WooDWorkeR. With him I did have an inspired taslk about how to mechanical strengthen the connection between multiple displays. I am still thinking about which one would be the best. Hot Glue? Foame tape? soldering massive wires on it? or maybe some other? I do not know yet., but I like hot...

Nice project! If you're interested, you can enter #The Square Inch Project—it looks like your design meets the requirements already!

So I've tested your library and obviously it works on an ATmega328 (Pro Mini) but I'm having trouble on an ATtiny85 (Trinket and bare ATtiny cores). The aliases MOSI, MISO and SCK seem not to be defined in the relevant pins_arduino.h which gives me an error for every argument in tiny7.h:10 stating that they are not defined in this scope and an error in the sketch for every argument stating "uses the default argument for parameter [2/3/4], which is not yet defined". Editing pins_arduino.h didn't work but I'm not sure I'm looking at/editing the right file since I'm also not sure where the board manager of the 1.6.4 IDE puts its hardware files. When I try to override the default pin setting in the [tiny7].begin() call I get the three "not declared in this scope" errors from above and an "Error compiling."

Regarding the inversion setting I have a suggestion. Due to the pinout of the displays you could also install them upside down, summing up to 4 different ways to mount them. It'd probably be a lot more work to accommodate these two additional cases but maybe that's something to add in the future. Yet another suggestion is to implement a setting that inverts the output such that this library can be used with common anode and cathode displays.

Sorry if this is getting too much ;)

Well, I also tried to at least least compile it for a Trinket now and same error. I think its because MISO, MOSI and SCK are not defined then. And that right the Tiny85 do not have these pins. Sadly using myTiny7.begin(false,0,1,2); do not help, because the are still MISO.. undefined, although not used. I will fix that in the next version of the library.

The upside down is again a good idea, and not difficult to add (also in next version I think).

Supporting common anode displays is something I have to think about. should be realizable via some solder jumpers to change the common pin to either Vcc or GND. And an inverted output at the shift register.

Sounds awesome! If only I could skull more than once ;)

The Tiny85 (25 and 45 as well) does not have a hardware SPI interface, it has a USI interface, which stands for Universal Serial Inerface.  The MISO, MOSI and SCLK pins on the Tiny25/45/85 only work for ISP programming only.  If you want to use the USI as an SPI interface, you must set the USI into the proper mode then write your code to properly use the hardware to make it work like an SPI interface.  Its not like the Mega328, etc. where they have the built-in SPI interface and you set the mode (0, 1, 2, or 3) and I/O pin directions then write/read a byte to/from the SPI data register.  It takes a bit more code on the Tiny25/45/85 but it can be done.

With how much current are you driving the individual segments?

That depends on the resistors you use. In my test setup I used a red display. Each led have a froward voltage of 2V. So I used 150 ohm resistors to get 20mA current. You can use bigger resistors to save energy, but the display is darker than.

Yeah, I know that it depends on the resistors but I was asking in regards to the maximum continuous current through the register. I was playing with some shift registers and seven segment displays I had lying around and was planning on driving the segments with 20mA, too. However, that sums up to 160mA in the worst case which is way more than my HC164Ns should carry (50mA). The first two datasheets I found for the HC595 quote it's maximum to be 70mA. It's not killing the SRs instantly but it's still way out of spec, isn't it?

Yes, in the data sheet 70mA is the maximum total current. But at least my HC595 can handle 8*20mA over ~2hrs. To be on safe side I should use larger resistor to limit the current through each led to 8,75mA.

Assuming that every number/symbol is equally probable you could also dimension the resistors according to the mean number of active segments which might increase the time before failure. I'm just surprised that the SRs operate this far beyond their max ratings.

I'll probably go with 20mA per segment, too, because the displays are quite dim and 150 ohms is what I have on hand for four digits ;)

If you're interested, I can let you know how your library works with this "tiny7 through-hole clone" I'm building but it shouldn't be an issue since it's basically shifting out the data. Are you planning on implementing a function to clear the display? Might be handy and the hardware seems to be in place anyway.

Btw: I like the idea of being able to use the display on either side of the PCB!

There is a way to clear the display yet. But it is not good. I should make a function like tiny7.clear() or similar. But functional the same can be achieved with tiny7.show(18). That is some strange but the 18th character is empty digit for the library. But this could also change in future, because I am planning to support characters, so you  can write messages on the display.

Feel free to test the library yourself. But I think there will be a new improved Version during the next week available.

Perfect use for a shift register, unike other modules where they manage to put an Atmega328 to control a single RGB led.

I'm pretty sure all you have to do is jumper the Q7'/QH'(depending on the source documents you're looking at ) to the DS/SER pin on the next one to daisy chain the boards together.  There could be a bunch of different ways for this to be done, but I definitely wouldn't use angled headers. Just an idea, you could make two separate boards, the one you already have and then another board to plug in multiple displays and daisy chain them.

Don't forget they all get the same clock too.

This is pretty neat! It'd be cool if one could daisy-chain additional modules onto the one that attaches to the ISP header. Also the library would have to support multiple digits. With some headers on the side this should be possible since it's based on a shift register, right?

Well, that is good idea. And yes it would not be that difficult because is used a shift register. I will consider this in a next Revision. But first I will make the one digit Version and libraries ready.

Yes, having this version working is probably a better stating point for an expansion.

I was just thinking that if one wants the digits to be close together, headers might not be the best idea since right angle female ones would have to be flush with PCB edge which makes them take up a lot of space. Therefore it might be better if the PCBs are connected from the beginning and can be broken apart as needed.

ESP8266-01 server, programmed in Arduino-C, + I2C oled to display text-messages of upto 128 characters that are typed in a browser.
Project Owner Contributor

This beginner Arduino project using an OLED display is perfect for any graphical projects or projects involving visuals of data or images.
Project Owner Contributor