"Rooster on Wrist" is the name I chose for this project. Mainly a 1.44" tft lcd + stm32f4 discovery an hc-05 bluetooth module and lots code. The main purpose of the watch is to sync and display Time/Date/Weather and Notifications from the phone. The watch uses the internal RTC on the STM32F4 to keep tracking of the time.

So fare I managed to get the first watch face done + the companion app on Android. The watch successfully sync data from the phone and displays it.

One aspect was to display the data in an elegant way. From the start I was inspired by the pebble and I took a look at my of the watch faces online to create something similar.

Concerning the Android App I always thought I was going to write my own but at the very last moments I discovered App inventor which saved me tons of time !! I still believe I will have to write my own code sooner or later.

Just like many of hobbyists out there I use CooCox with GCC for my projects and that's a major key factor why I chose ARM over PIC32 MIPS , the free IDE and C compiler. 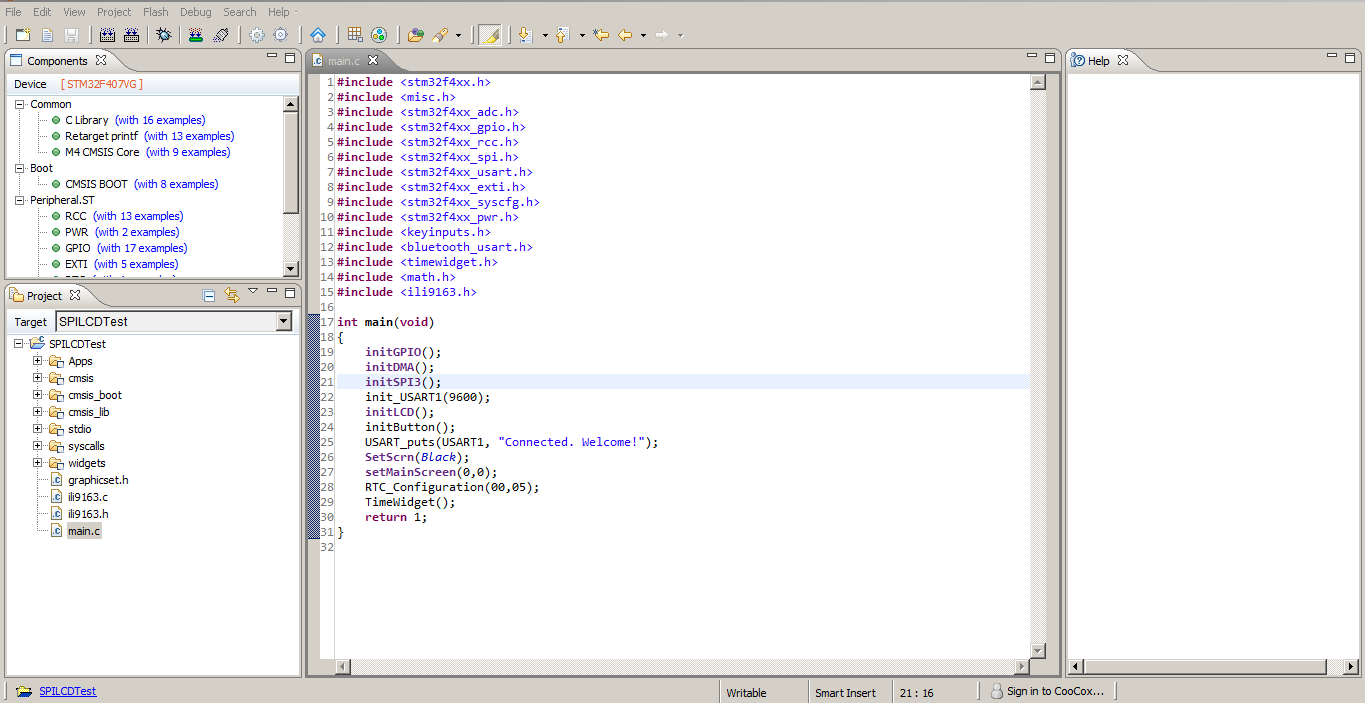 The first step was to interface the tft lcd , I looked up online and luckily I found many useful blog posts about using the ili9163 tft lcd. Obviously I could have checked the datasheet and write my own library which I eventually did and managed to get something on the screen (a bitmap of what I imagined) 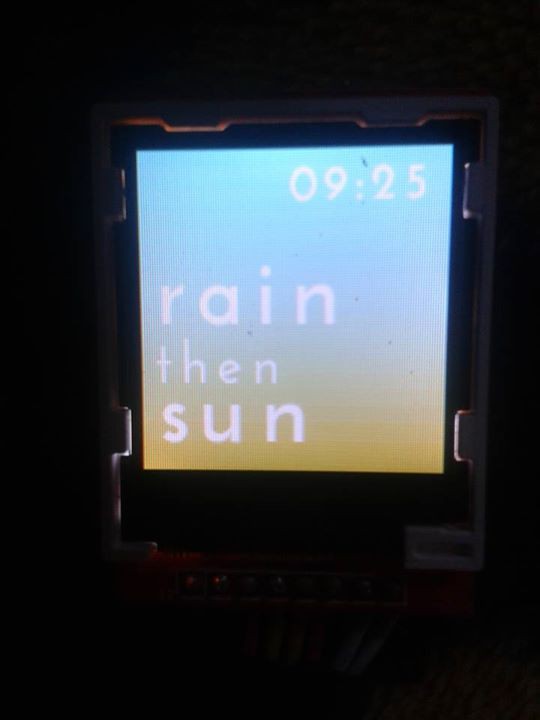 This TFT LCD uses SPI and is interface to SPI3 on the discovery board. I use DMA to make it even faster to loads frames ( thought I did not see much a difference )

I kept working on the display library because it was a key factor in handling most of the work here.

Next I wrote the code for the RTC unit, which has two main functions RTC_Configuration() which sets the RTC configurationa and TimeWidget() which constantly keeps track of the time and updates it on the screen.

The hc-05 is connected to the USART1 unit pins and triggers an interrupt which stores the data received from the phone and calls RTC_Configuration() to sync the Time/Date from the phone.

When I first started I had to use an app called BlueTerm on Android, it's an extremely useful Bluetooth terminal app that allowed me to communicate with the HC-05 module and send data manually to test my code.

Later on I learned about App inventor by MIT and it was like few minutes untill I got my first companion app done. It reads automatically the time on the smartphone and syncs it to the device. 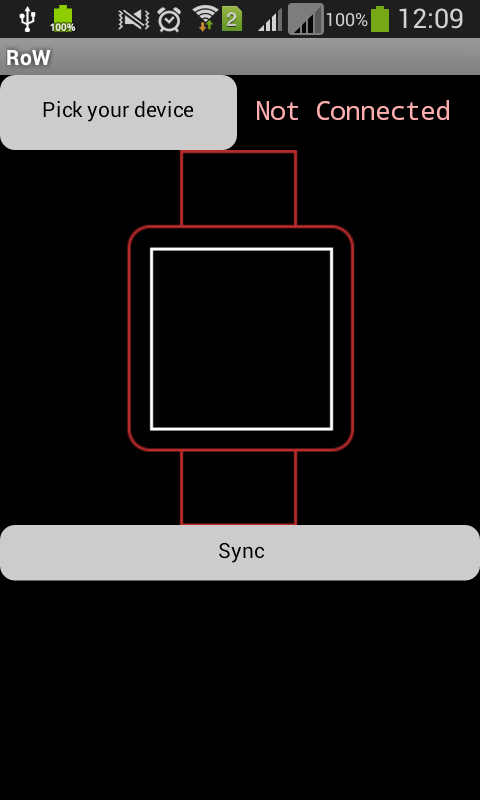 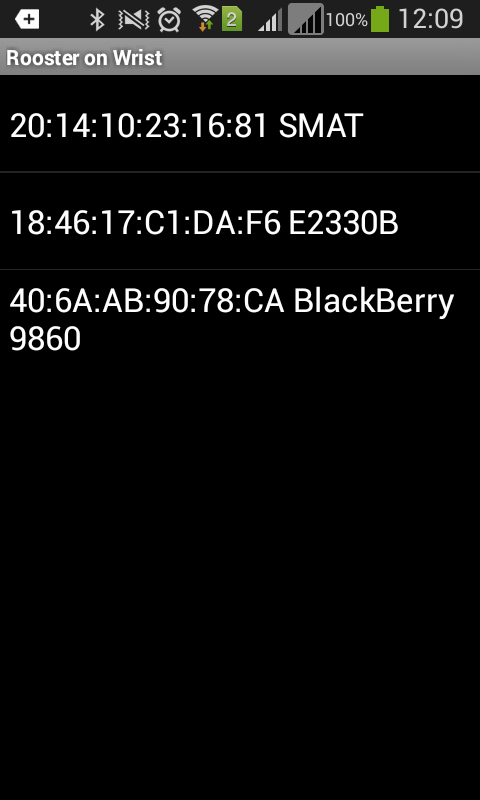 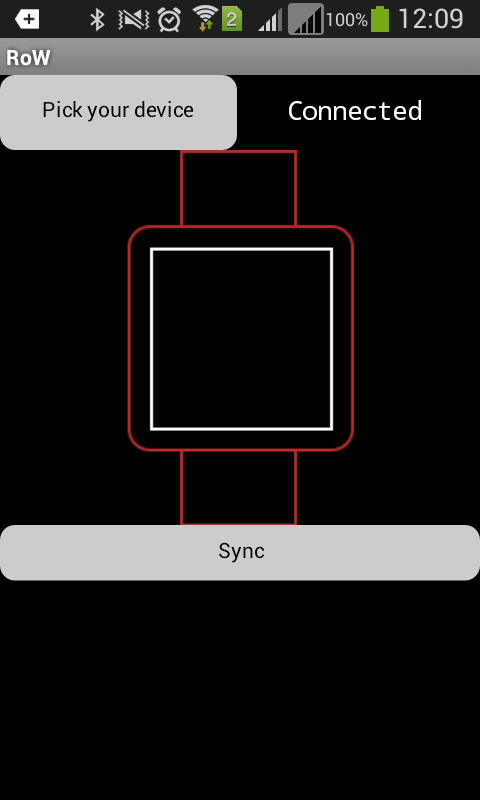 From the begging the goal was to create a complete smartwatch with complete functionality.

- Improving the android app and sync incoming calls and weather.

- Build a small PCB for with the STM32F407 or STM32F051, add battery (with voltage regulator and controller ic) , add a SPI 16MB flash memory to store all bitmaps.

- 3D Modeling a case and manufacturing it.

Hey there— I can't seem to find your design files. Could you post a link?

It's the obligatory comment, I'm afraid... Would you consider selling these, manufactured? I'm much more of a software guy than a hardware one. Soldering something so tiny is a bit beyond my capabilities. But I've been wanting a watch I can program myself for years! I've got a mobile phone watch, but it's a single module, Mediatek's MTK6226, and I'm pretty sure there's not much room for custom software in there. Particularly without breaking the existing functions!

Shame cos it's a nice watch, cost about 50GBP. Has a resistive touch-screen with not-bad handwriting recognition, one character at a time! Bluetooth, keypad, colour OLED (I think). Ideal hardware. If only there was a way of hacking it!

I'd love something I can write my own code for. Doesn't even need to be a phone itself. Talking of which, might be nice if you could put a little joystick in there as a control, and maybe a couple of buttons. Touchscreen too would be good. For a version of Freecell!

Actually this project aims for this exact problem. The final watch itself will be more targeted towards developers and the maker community.

Hopefully once done ( soon ) I can setup a website for the code / schematics and have pre-made boards for sale ( for those who dont deal too often with soldering , like me ).

hi, i wonder how you will get everything in such a sleek case, i mean, the mcu, battery and screen take up quite some space (or you want to use a BGA instead of TQFP based mcu?)

I don't think it's a challenge to get that done actually even with TQFP. All this needs is a MCU , BLE chip , voltage regulator & battery controller which can fit easily in 35 * 40 mm pcb. The thickness ( If I'm targeting something close to the pebble for example 11 mm ) 3 mm for the LCD 4 mm for the pcb & 5 mm for the battery (150 mA) is close enough. If I'm going to do this I'll definitely have to order custom pcb made & assembled so this is a bit expensive but there is no escape from that.

I recommend you take a look at Dave's teardown for the pebble time to see how they do it .