You can find more information about the project at http://mqopen.org

It creates open source network of very cheap devices which can collect data or can be controlled for some actions. Also provides tools for data processing and network health monitoring.

This project is divided in three main parts:

Infrastructure is based on MQTT protocol. It is lightweight publish-subscribe communication protocol originally developed by IBM. 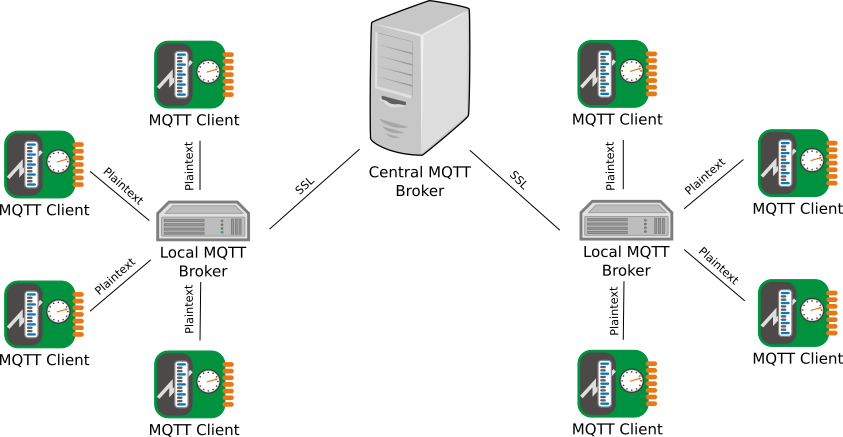 This approach allows to use cheap hardware for building endpoint devices and also use SSL encryption for data exchange.

Use of MQTT based network has several advantages:

Main part of this mqopen are endpoint devices. These devices can be sensors for gathering data, but also devices which can read data from the network and take some actions based on them.

Node is generally a device connected to MQTT network and capable of sending or receiving data. It can read data from various sensors or control some hardware.

All mqopen nodes shares same source code. They only differ in the configuration. This means than there is no need to maintain many differed source trees, which can leads to problematic bug fixing and code maintaining issues. When you find bug in some core routine, just fix it in the one place. And what about porting the code for another architecture?

User also don't have to write single line of code when building a new node. You don't have to implement any setup or loop functions like in Arduino or its derivatives. Creating your own bugs inst't a progress. All what user have to do is download a source code and configure it.

Firmware is written in plain C language without any mysterious Arduino or LUA layers. These project are excellent tools for prototyping, but not for serious work. C language allows to do optimizations and you exactly know, what the processor does.

This is something I've been working on at my place you have your final project mapped out so much better then mine. I will be watching and throwing my two cents in when i have it for you.

This looks like a good beginning to a cool project.  If you are interested in some hardware ideas for these nodes you can check out my project.  https://hackaday.io/project/4648-analogio-a-full-stack-iot-platform.  Also an alternative to ThingSpeak is the phant.io lib from Sparkfun.

IOTsatcom is IOT and robotics everywhere