Grove-compatible breakout board for Arduino Nano with Serial, Digital, PWM, Analog and I2C

Seeed Studio's Grove is an ingenious way to create hardware interoperability between accessories made for maker. It uses a standard socket & pinout, supports more than 100 accessories already (from sensors to output, from displays to wireless communication). Breakout boards make several microcontroller & computer platforms to be able to use these accessories (full scale Arduinos, Raspberry Pi, Intel Edison and Galileo, VIA VAB-820, and so on).

GroveHat now brings access to all those accessories to Arduino Nano as well!

This breakout board targets the v3.x series of the Arduino Nano (and compatible clones), while trying to be usable with other boards like the Pro Micro and v2.x series of the Nano. It makes available Serial (TX/RX) line, Digital, Analog, PWM, and I2C functions, while maintains the same form factor as the Nano board. Since all the above boards have slightly different pinout and very little space on the breakout board to indicate all the possibilities, the silkscreen tries to indicate the usage for the Nano v3.x, while additional documentation shows the functions on other boards. 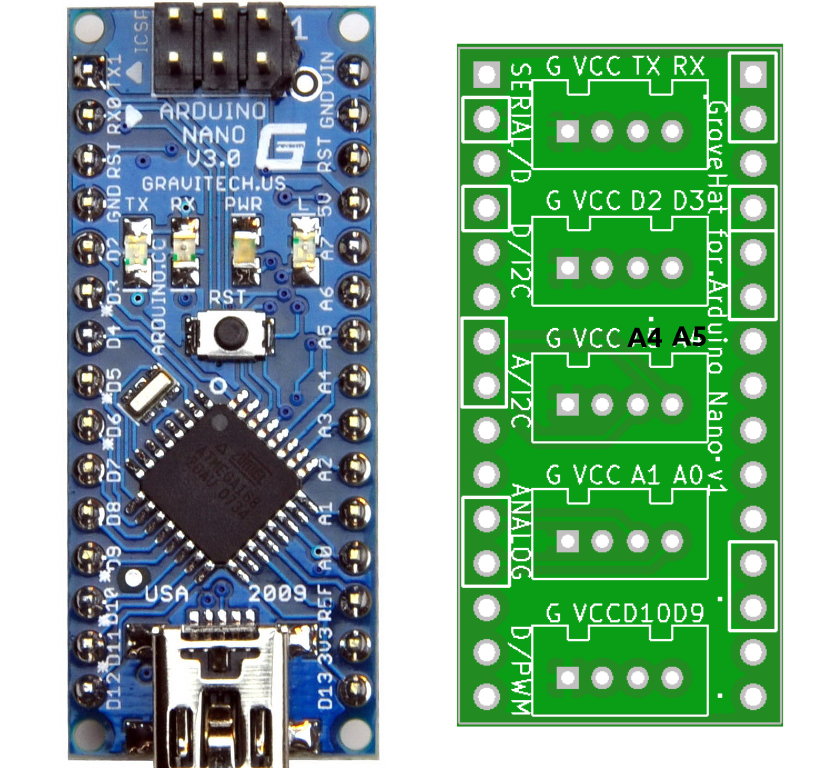 Above: matching up the Nano and GroveHat: fits onto the back of the Arduino board. Known issues with the v1 board (mostly harmless, just for reference) The A/I2C socket's silkscreen wrongly indicates the pins for A4 and A5, they should be the switched: for most Grove-compatible analog devices use "A5" in the sketch (Nano v3.x) The A4/A5 pins are not marked as used with a silkscreen square around them on the side These issues will be fixed in future PCB runs!

Revision 1 is not available on Tindie: GroveHat for the Arduino Nano.

The board is released under the CERN Open Hardware License 1.2.

Tndunio Mini is a similar Arduino function of uno development board, but with the world's smallest size: 15*18mm, it is only 1/13.5 UNO of t
Project Owner Contributor

A straight-forward tutorial on how to properly get the Maker Uno ready to work with Arduino-compatible software and hardware.
Project Owner Contributor

BEETLE has a small size and use the leonardo microcontroller as the brain. This is very small, compatible and easy to carry microcontroller.
Project Owner Contributor

SMALLEST Arduino DEV Board EVER!