Our goal is to modify FURBY toy manufactured by Hasbro Inc. and equipped him in a custom controller that allows to control him form PC.

Multiple robotics projects are developed, aimed at providing the humans with friendly robots permanently accompanying them in their daily lives. In the majority they represent expensive robotic constructions with very limited possibilities. The establishment and maintenance of the robot-human communication, both verbal and non-verbal, depend essentially on capabilities of naturally and plausibly showing emotions by generating facial expressions by the robot.

FURBY toy manufactured by Hasbro Inc. has a friendly appearance with outstanding capabilities in such price segment. Unfortunately, manufacturer does not provide for the possibility of using its product as a HRI (human-robot interaction) research platform. There is no possibility of full behaviour control. Our goal is to modify current version of FURBY and equipped him in a custom controller that allows to control him form PC.

FURBY and the FURBY logo are trademarks of Hasbro Inc. registered in the U.S. and other countries.

Open FURBY uP controller is based on NXP Kinetis, Cortex M4. Firmware is managed by NXP MQX™ real-time operating system. Controller utilise Robotis Dynamixel protocol to communicate with PC. So, you can control him by any software that has implemented this kind of protocol. E.g. communication with motor, LCDs and all sensors may be realized in ROS which have their own dedicated dynamixel_motor node. 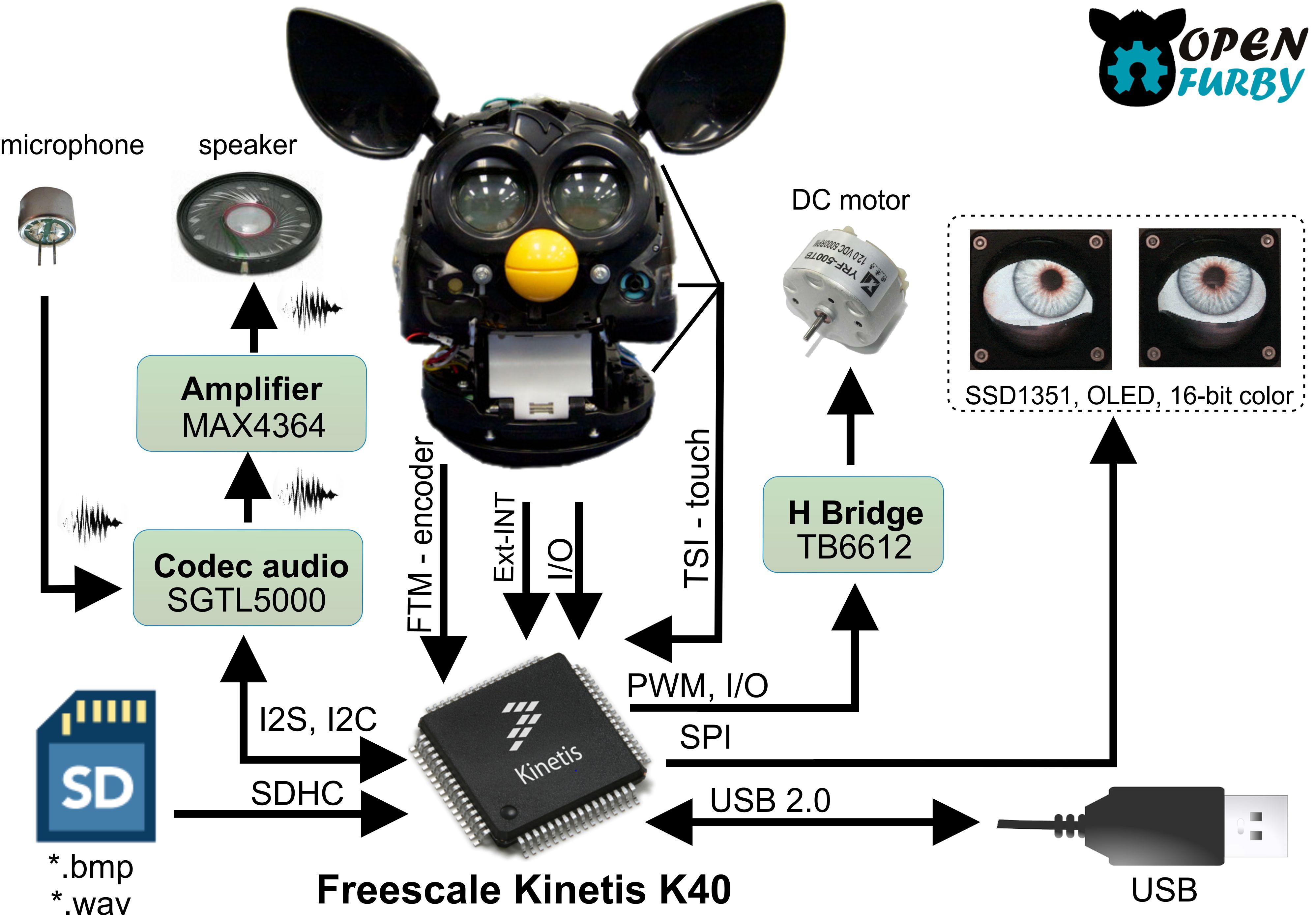 The PC control system that Open FURBY utilize as the main is an open-source software based on Gostai Urbi and compliant with the three-layer architecture paradigm. This system was developed by FLASH Robotics at the Wroclaw University of Technology to control their robots EMYS and FLASH.

The lowest layer of the control system consists of modules called UObjects which enable the programmer to access motion controllers, sensors and external software. These modules, written in C++, can be dynamically loaded into Urbi engine, which takes care of their orchestration (e.g. scheduling and parallelization of tasks).

The middle layer of the control architecture is responsible for the implementation of competencies, which define what tasks the robot will be able to perform. The competencies are usually implemented as sets of functions delivered by the low level modules. Urbi delivers a script language called urbiscript that gives the programmer a quick way of creating and synchronizing complex behaviors. The designed control system enables accessing the robot hardware and competencies in a unified manner - using a tree structure called robot. It makes using the API, implemented in the middle layer, more convenient and helps to maintain the modularity of software. Elements of the robot structure have been grouped based on their role, e.g. audio, video, body, emotions, network. The middle layer also contains the competency manager which decides how the specific behaviors should be realized, depending on the current physical setup of the robot (oFURBY can operate as a standalone robot or be combined with cameras, Kinect, arms or even mobile platform) every combination requires a different set of scripts in the competency manager).

The highest layer should contain a dedicated decision system responsible for utilizing the behaviors provided by the middle layer with respect to a specific application. This layer can contain anything from a simple remote controller to a complex system simulating human mind. 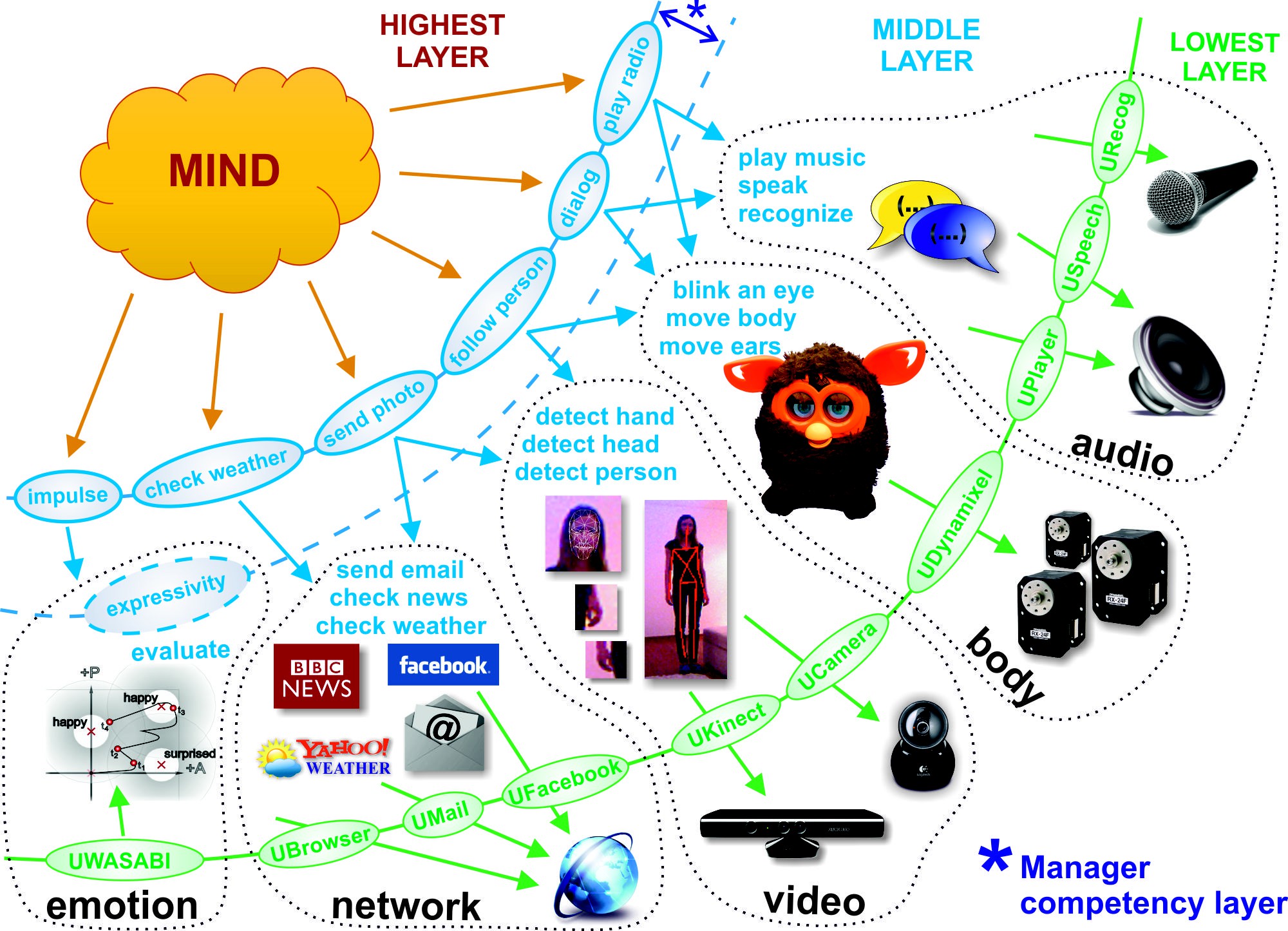 More about FLASH's software you can find here:

and there is a special edition set of scripts for Open FURBY:

oFURBY API documentation (only body part, rest is the same) :

and some programming examples:

Any chance to update the links on this? Can't find a script download that isn't 404

Does this work for the furby boom?

Still interested in Open FURBY project? Would you like to have your own? Please, help us and fill out the survey. https://goo.gl/forms/AtYEvLmBCwgJkfYz1

Sure. Our Open FURBY is based on Furby BOOM which is similar to Furby 2012.