Camping with dear friends? Riding the train with complete strangers? Bored at the mall? Always wishing you could run your own tragically out-of-sync silent disco? If any of these describes you, then r0ck candy pirate radio is for you.

Inspired by PirateBox, r0ck candy is a software stack for your Raspberry Pi that turns it into an open hotspot streaming your music collection to nearby devices. When those devices connect and attempt to browse to any website, they will be redirected to the r0ck candy homepage where they can launch the stream and chat and vote on the next song. Due to its compact size, the r0ck candy can be concealed in a bag or pocket or attached to nearby structures.

At the heart of the project is a Raspberry Pi Zero running Raspbian, mpd, icecast2, hostapd, dnsmasq, nginx and a yet-to-be-determined CGI language. (edit: currently working with Node.js in lieu of webserver+CGI)

candy: in a candy container 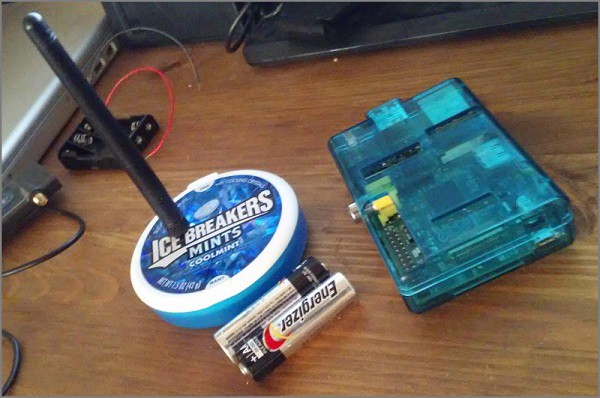 Goal: create a pocketable streaming music server over local wifi network with an interactive web interface, and provide detailed and easy instructions for others

Materials and method: A Raspberry Pi Zero running from batteries with a wifi adapter runs Raspbian, MPD, Icecast2 and Node.js to serve music and a web interface, and hostapd and dnsmasq to provide local wireless access. I'm still looking for the right project enclosure. As a last resort, it should fit comfortably in an Altoids tin.

Development: The Zeros are hard to come by right now, so a Raspberry Pi B is standing in for its little brother. The web software is being developed on a VM now that the model B has been shown to run Node.js, MPD and Icecast2 acceptably. No database is needed.

I thought it can transmit FM. If I run more then one stream player, it will be hard to synchronize them.

Would I really need a wifi adapter If I am using a pi zero w?