Some good friends are getting married, and have asked various people to help out with the wedding. They came to me with one request. To build them a "Unity Fireball" for the ceremony. This project involves creating a controllable flame effect, with focus on safety, and reliability. The flame effect portion of this project portion of this project is not encouraged, see disclaimer below. Other elements of this project can certainly be used in many other projects without issue. Specifically, the sequencing controller, prop construction and robust electrical control over long wires.

This project includes what I believe is a new innovation in the design of a propane poofer, in the use of a sequenced pre-release of propane which is not ignited. The project logs explain more about this.

A "Unity Candle" is sometimes used in a wedding to symbolize the two people coming together. Each participant uses a small lit candle, and together, they light a larger Unity Candle. Continuing this symbolism, but representing the background of this particular couple, they sought a much larger flame. A control box is located in the ceremony space to allow the couple to light the candle. It has a large firing button on the top, and key switches on the sides. They each have their own key to symbolize their joint efforts coming together. Once armed with the key, the large button becomes active to fire the candle. When fired, a 30 foot high fireball comes out of the candle itself.

Front Room Photography took this fantastic photo during the ceremony: 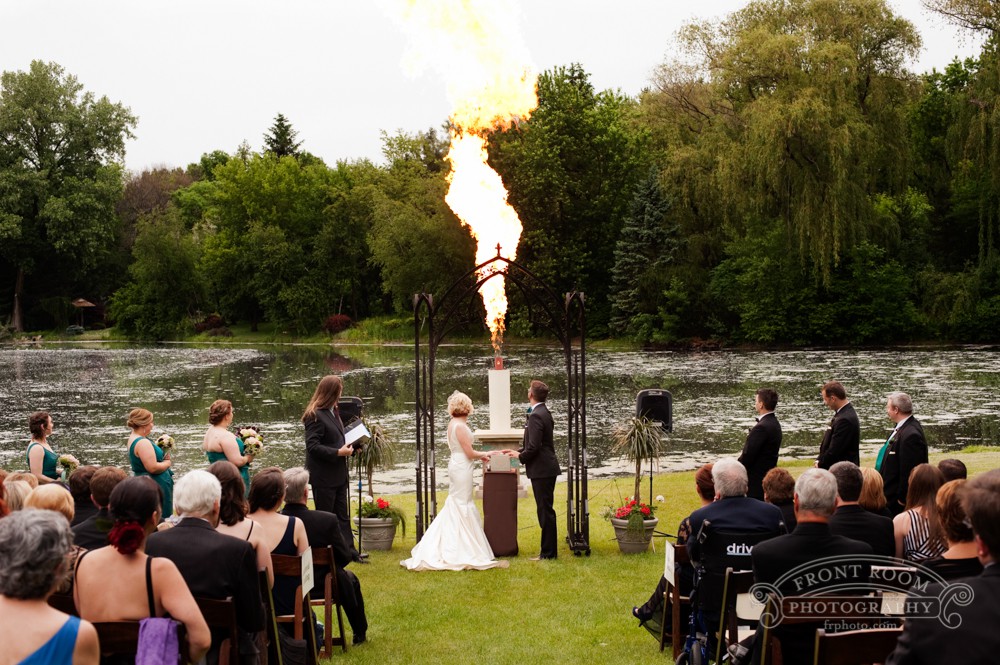 How the ceremony came together:  (this is not the THP entry video, see link on left for that)

If you have any questions or comments, please use the comment box below.

More details
How it all worked out
Installation and setup of the system on site
Wiring the system on site and being a connected device
Construction of the firing button and keyswitches
Discussion about electrical robustness in this system
Rain shield for the hot surface ignitors
Estimating the heat output and costs of operation
Additional testing of various sequence parameters
Building the decorative shell
Code running on the Arduino Micro
Added circuitry, schematics and design notes
Modifications to the controller
Reverse engineering the existing hand controller
Notes on getting the parts
Initial manual testing of the propane poofer
Mounting the ignitors
Building the relay board to drive the poofer
Assembling the propane poofer
Initial discussion of safety design
Researching details of a propane poofer and possible improvements
Researching methods of making a fireball

THE PROJECT DOCUMENTATION AND MATERIALS ARE PROVIDED "AS IS", WITHOUT WARRANTY OF ANY KIND, EXPRESS OR IMPLIED. IN NO EVENT SHALL THE AUTHORS OR COPYRIGHT HOLDERS BE LIABLE FOR ANY CLAIM, DAMAGES OR OTHER LIABILITY FROM THE USE OF THIS CONTENT OR OTHERWISE.

Hi Quinn,  I am confused by there apparently being 2 projects with differing parts. I hope I can ask a few questions as I build a similar project. First, one parts list shows a 25' LP hose with quick disconnects on both ends. What is this for? All the pictures show standard screw on connectors, except for one image that seems to show a quick disconnect on one end of the feed line. Are these things reliable for sealing gas lines? I've used them for air, but they often stop working and leak, no?

What I want to do is have 1 large 80lb LP tank to feed 2 gas grill accumulators inside two 7' columns separated by about 8 or 10'. I want them to burn pilots that look like tiki torches and then do a random sequence of effect like on unit poof out a ball, then the other. Or they alternate a few short bursts. Or they both blow a 2 second pillar of fire simultaneously. I like the rolling cloud effect and the short puff and of course the large column of fire. I don't need more than perhaps 5 to 10 feet of flame. How do I feed two accumulators from the same source? I was worried that if the second one T's out from the first, that when the first one goes off, it would drain the second one a bit or that there could be some other issue I am not considering.

Adam Fabio wrote 06/24/2014 at 06:01 • point
Thanks for a excellent and well documented project! I'm not sure if connecting two lives will cover the "Connectivity" portion of The Hackaday Prize, But I'm happy to have your unity candle in the competition!

Quinn wrote 06/24/2014 at 21:55 • point
Hi Adam, and thank you for the feedback! The connectivity aspect is probably better covered under the controllers ability to load and save firing sequences from a computer via RS232, as well as being able to integrate with a theater/DJ style lighting control system.(instead of the interconnected nature of the various elements to this project.) I had considered this portion of the prize goals, but decided to submit after Brian Benchoff's comment about what "connected" means on the blog which included the example: "A 3D printer is considered ‘connected’, even though it’s just a serial connection. The simplest answer is some sort of digital I/O."

Official Hackaday Prize Entry
Determine the chemical properties of your swimming pool automatically, while keeping you in the loop
Project Owner Contributor