A gesture controlled robot which can change speed and direction using the Myo armband when in tele-operated mode.

The GoonGuard is the robot protector of all official goons. Created by the #GoonSquad, the GoonGuard can function as a teleoperated and/or autonomous patrol or reconnaissance robot.

Teleoperated Mode
While in teleoperated mode, the robot is controlled using the Myo interface. During teleop, the robot can be controlled using various gestures to go forward, backward, turn left or right, or stop. Additionally, users can adjust the speed of their robot between 20% and 100% using the Myo armband. The GoonGuard is also equipped with a range sensor for large obstacle avoidance and a Blinky Matrix to identify which state the robot is in. During teleoperated mode, the path dictated by the user is saved as a “patrol route” onboard the Raspberry Pi.

Additionally we have access to the IMU data from the band, such as yaw, pitch and roll.

These inputs were mapped to the following outputs:

Base Side Implementation Stack : 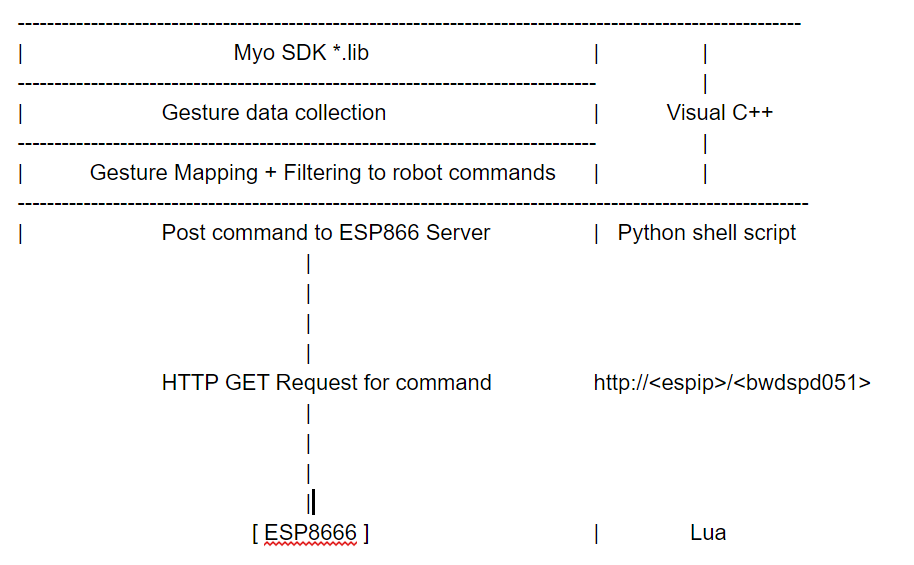 Lua script running on the ESP that parses the GET request and outputs the command on its serial.

Since the spark core was not working, we ending up deploying a web server on a ESP8626

The python script is launched as a child process by the C++ Program whenever it needs to post a command ( Yes we know it’s very hacky!) with the command as an argument to the script that it needs to do a post of.

The ESP receives the GET command and parses the url to get the command which it writes to its serial port.

Autonomous path was left unimplimented, due to integration issues with esp and the raspi, line feeds are being appended propoerly

In order to support the hardware of our robot and give it a nice visual aspect, we created a CAD model for a base to place on top of the robot.

A first iteration was sent for 3D printing, unfortunately it failed as the printing head was hitting on the sides of the machine because our piece was too close to the allowed limits for the printer.

Therefore, it was split up in two parts which we would glue together. The first half worked, the second did not. The 3D printer could not properly print it.

We tried that last piece another time, still didn’t work. We tried a third time with more support, still did not work.

Thus we ran out of time, so another...

The 2017 Hackaday Prize
The robot navigates indoor, in a pre-defined path, with high accuracy, and allows its real-time tracking on a phone. No GPS, No WiFi, No Map
Project Owner Contributor