At jarek319's request, I'm reviving this old subject as I document it for posterity, thinking that it might be useful for others.

Around 2006 I was tasked to put a lot of light into an architectural element of an emblematic parisian store (FNAC Montparnasse). The only solution was to use the then-new 3W LUXEON LED because my light estimates, the precisely controlled fade-in/out (which required electronic control) and longevity couldn't be provided by other technologies (digital dimmable ballasts wouldn't work down to 1% and incandescent bulbs don't last long enough).

Can you imagine controlling 432 high-power LEDs when there was no dedicated controller on the market ? The worst is that all these LEDs draw a LOT of current and turn it into heat, which could damage them in a closed environment. I had to find a thermal regulation solution that would fit into the budget...

Power LEDs were not as tightly binned as today. Their Vf would vary and any mass deployment requires a loooong string of LED fed by a constant-current power driver. But if one LED breaks, all the others turn off.

There is also the issue of temperature regulation. The hotter the LEDs get, the shorter their lifespan and I aimed at 10y+ average lifespan. I don't want to be called back on site to replace one LED every year.

The solution I found employed several methods to keep the whole design safe at all levels.

The last part could have cost an arm and a leg, since a simple power resistor would not be enough (too much variation of Vf from LED to LED, and power trimmers are expensive)

This project describes the technique I used. It was so efficient that it would actually not regulate the current, but the temperature.

This circuit is (mostly) stable but has a very high temperature sensitivity. It uses cheap parts, and each string can be individually set to a desired current at a certain temperature. When the ambient temperature rises :

As can be seen on this prototype, all the parts are thermally coupled by screws in the aluminium bar: 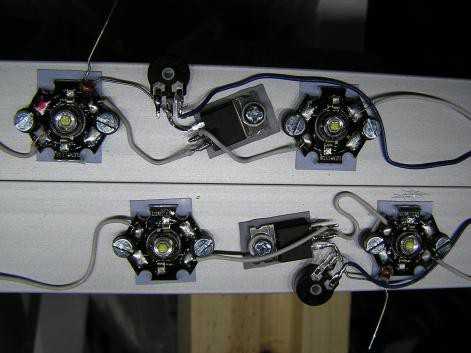 The thermistors were not yet totally cemented in silver oxyde thermal paste.

The circuit worked very well, considering that more than a hundred had to be wired, tested and calibrated individually. The whole project was a nightmare but I have done a great job.

Some of the issues were:

Anyway the simple regulator circuit was a great design and I reused it for my own lighting purposes, in 24V version. You can use it to power lighting and keep the LED from suffering if exposed to heat. If you have only one string, you can even dim it !

Necessity is the mother of using your head for thinking :-D
In the last decade, I've always wondered if this was not already a well-known trick but since other commercial solutions have appeared, I suppose not. Hopefully, we'll find if this device has prior art...