Unmanned vehicles have common needs: energy to think and move around, sensors to interact with their environment, communication skills and servo control. It really doesn't matter if the vehicle is going to fly, float, dive or crawl. In most cases all of the above requirements are present in one form or another.

This project is about a modular flight controller. It was made modular so I could work on one module without worrying about breaking down the rest of the system. I wanted to be able to upgrade a module with a new sensor, component or capability as much as I wanted the whole system to configure itself every time a new module was plugged. Finally, I wanted the system to be able to handle redundancy, just in case the user plugged more than one of the same module, like two pilots, or three sensor modules.

To guide the system development I followed some guidelines:

This sounds much like an Arduino, but with some basic differences:

To make all this work I had to develop and test some standards:

The electronic standards were translated to components in EDA software. In the beginning this software was Eagle, but after hitting its limits I decided to migrate everything to KiCAD. It took me some time to reach the current project status, which is partially described below, module by module.

1 - MCU module: an ATMega328P in a little PCB, connected to the other modules by a main SPI bus. This module is surrounded by pads much like an Arduino stamp. These pads form a standard connection to a smaller module which I call a submodule. They deliver a second SPI, an I2C, a serial connection, two analog inputs and some GPIOs to the submodule. To enable the second SPI I had to remove the boot loader from the ATMega328P and strip all Arduino and wiring traces, rewriting what I needed from the beginning and redefining many things. 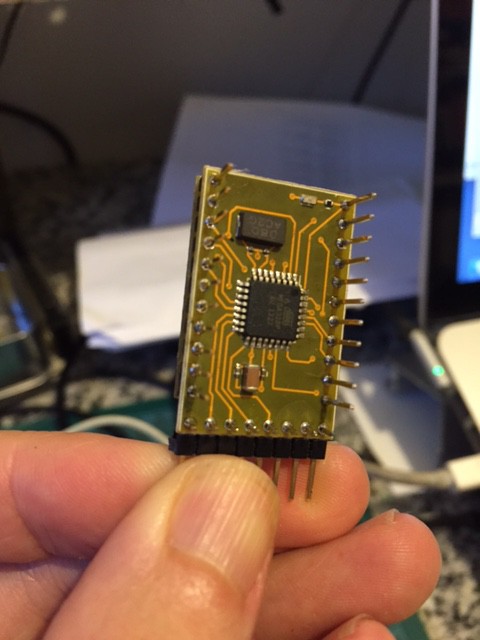 2 - AMGP sensor submodule: a small board that connects to the generic MCU module. This submodule has an accelerometer,...

Hi Mr Hering,can u share the code for Tricopter control ,i m in an urgent need

My mail id is gykreddy623@gmail.com

Hackaday Prize 2020
Finally a mouse that can be freely changed, fixed and upgraded suit the user.
Project Owner Contributor