Chronio is an Arduino-based 3D-printed Watch. By not including fancy Wifi and BLE connectivity, it gets several months of run time out of a 160mAh button cell. The display is an always-on 96x96 pixel Sharp Memory LCD. If telling the time is not enough, you can play a simplified version of Flappy Bird on it.

DIY watches often consist of a pcb and screen wrapped in duct tape. I wanted to change that by designing a 3D-printed case. It is closely oriented on the Pebble Time.

I would like to order the same card than you but i dont find any gerer file to end, for exemple, to jlcpcb.. ?

Also, do you ave any code to share ? Is it the .ino file shared on github ?

Hi, by any chance did you design the case with Fusion360? Would you be willing to share the original files? I would love to modify it for other projects

I just added the Fusion360 file to this Hackaday.io page. Have fun!

Have you thought about a small lipo instead? And if so would the PCB need to be altered?

Nice! I dread to imagine how long the battery life would be if you had added something like a 2000 mah battery(Although it would make the watch too big)

How did you print this case? Have you ordered it somewhere? If so, could you recommend that service?

Anyway, your watch looks great :) Have you thought about selling it on Tindie?

I 3D printed the case myself, it's available on Thingiverse:

The display is not in production anymore, also I would have to make lots of changes to make the watch a properly usable product. And it would end up costing more than a regular smartwatch.

Could you please tell me how did you obtained a six month running w/o any issues ? In my case, the maximum run time was 3 days with the schematic and code which is uploaded in Github ( without any tweaks ). In trying to solve the solution to reduce this huge consumption ( compared with your results ), I've depopulate the 1Hz Signal generator block, and it seems that this has extended the run time to 9 days, but of course had a problem on the LCD ( didn't show what it had to ). I will want to try the idea of Josh Levine, but wanted firts to know if you have an update this project.

Overall I want thank you very much for sharing your project. I extremely like it.

Thank you for the interest in the project! Can you somehow measure the current consumption of your device? If it only lasts 3 days something is very wrong. Maybe the Atmega is not going into sleep mode at all. You could hook up a current meter and set the Atmega and RTCs to sleep, then check if it's still drawing too much current.

I have no updates to the project, but there is always the possibility that the schematics or code contain errors.

this is very interesting but please add more ram and eeprom

#1 : I looked through your schematics but couldn't find anything that measures the Vcc, How are you doing that?

#2 : Have you considered using low power ARM based MCU ?

It is extremely beautiful BTW!

With the Atmega328 you can measure the supply voltage without extra hardware by using the internal voltage reference. I'm using the code from here: https://provideyourown.com/2012/secret-arduino-voltmeter-measure-battery-voltage/

There are a lot of MCU that would be better than the current Atmega. The next version should have BLE to connect to ANCS or Android Wear. I am still waiting for someone to implement this with an ESP32.

I love this project, itching to build one but I've hit a wall. The LS013B4DN04 has been discontinued, have you looked at any alternative displays?

I was hoping to put together a BOM and make one of these, but I can't seem to find the display for sale anymore :( Digikey and mouser both have LS013B4DN04 marked as obsolete

That's strange. But Mouser is still selling the TI dev board: http://www.mouser.de/Search/m_ProductDetail.aspx?Texas-Instruments/430BOOST-SHARP96/&qs=/ha2pyFaduh5PQFMmYAAPt37UMrWKy3/IS6SBSFKfVu5VwRligfmLQ==... You would just have to peel the display off the pcb. Adafruit has a rather expensive breakout board too.

Connect an output pin of the ATMEGA to the VCOM pin on the display.

Enable a 1 second alarm on the DS3231  and route the ~INT pin to an input pin on the ATMEGA.

Enable the 50K internal pull-up on the input pin on the ATMEGA and enable a pin change interrupt on this pin.

Once per sec the DS2321 will alarm and wake the ATMEGA by pulling the input pin low. Upon waking, the ATMEGA immediately writes a 0 to the alarm flag. This clears the alarm and the input pin will no longer be pulled low, so the current drain though the pull-up is limited only by how fast you can clear that alarm bit (you can do it quickly and power efficiently with careful setup, and some tricks while doing the i2c transaction).

Once the current drain though the pull-up has been relieved, the ATMEGA next toggles the output pin that is driving VCOM. This can be as fast as a single instruction write to the PIN register.

Now we do a very quick decrement and compare zero of a seconds counter (held in a register for fast access), and if it has been less than a minute then we return to sleep and wait for next alarm.

Obviously there is lots of other complexity in here, but hopefully you get the general idea.

I believe you will see very significant power savings from this strategy, and you can eliminate a lot of hardware and ensure a balanced drive to the display.

I am going something very similar for a related project and have been able to get single-digit uA total current draw. http://www.timesincelaunch.com/

Congrats on the 6-month run time! The watch looks great. Seems like an excellent intro into the Sharp Memory LCD world..

Amazing project, I'm thinking of building this. So simple and fool proof. Have you thought about setting up dual time / GMT timezone feature on this watch? Would be great to see as I use GMT with work all of the time.

Sure, dual time zones would be easy to implement. You just have to change a few lines in the code.

Would you have the time to implement? My programming ability is not that good...

Well, if you take on a project like this, you should already have some basic programming abilities. Or else you will run into much bigger problems than setting the time zones.

I'll be fine building it and I'll get the dual time incorporated. Seems easier than I thought. Thanks again for your prompt responses.

Awesome project! I am creating a smart watch for a school major work and i was wondering exactly how small your RTC module was. I purchased an RTC module from sparkfun (https://www.sparkfun.com/products/12708) however it takes up precious space. do you have any ideas on how i could make it smaller. I don't really want to go down the custom CAD PCB path since im not too experienced, but if I have to in-order to reduce the overall size of the watch i might.

The RTC-chip itself is pretty small. You can see the two RTCs as 8-pin packages here: 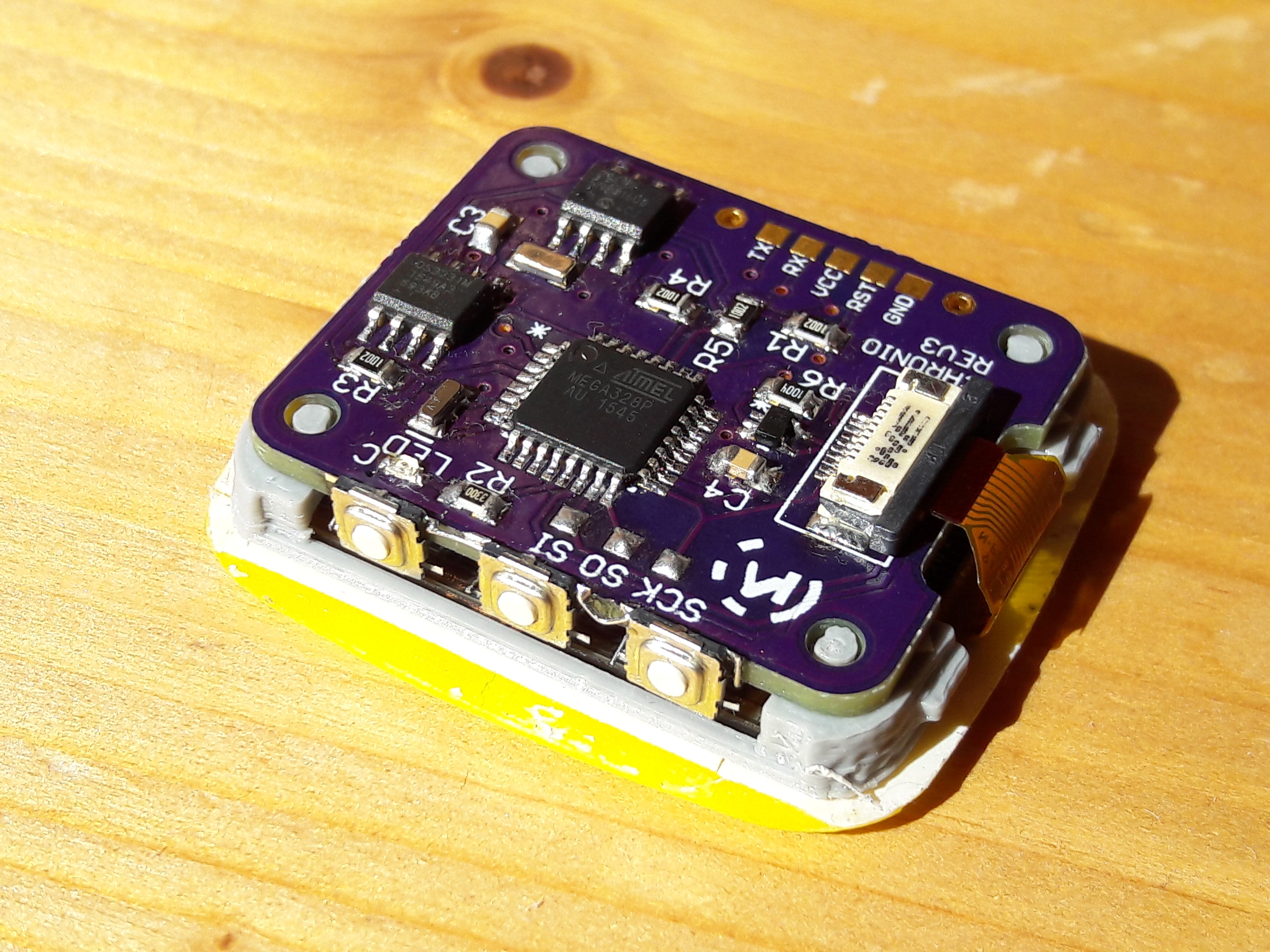 Most real time clocks need an external crystal/oscillator which in the case of the MCP79410 is available as a tiny smd device, slightly larger than a resistor. The DS3231 has an integrated oscillator, but is much more expensive. Breakout boards like the Sparkfun one use a lot of space for mounting holes and for the backup battery. If you need a smaller board I would use something like this: http://www.banggood.com/DS3231-Precision-RTC-Memory-Module-For-Arduino-p-969040.html?rmmds=search

You can solder the pin header and maybe the battery off. But I would definitely recommend you to try and make a custom pcb for your project. Most of the software is free and pcbs are cheap. It just takes some time to learn how to use CAD tools but it's worth it.

Thank you so much for the in-depth reply. I was thinking of just going with it and making a custom PCB, I'll run it by my teacher and see what he thinks.  But the project is due in August so i don't know if I'll have the time to learn the skills and then to create the watch.

This is a fantastic project -- very, very cool.  Do you think you will be releasing full instructions to build it?

Thank you! The CAD files and schematics are already online. As the project is pretty complex, I am not planning on making a beginner-level tutorial. But if you read the early project logs it should not be too difficult to assemble a working watch.

I'm impressed of what you have achieved. There is a memory lcd with 8 colors from sharp: LS013B7DH06. The problem is you need more than 3.4k of Ram to update the screen, but atmega328 has only 4KB. But you can replace it by atmega1284 with 16KB of Ram. Do you see this change feasible?

Thanks! It looks like the color and monochrome displays are very similar, so controlling it should not be too difficult. But for the microcontroller I would not pick an Atmega. There are many other options better suited for low power like the EFM32 or MSP430.

If I will ever have that much free time again, I will definitely build a second color display version of the watch.

@esvenco69 The LS013B7DH06 needs 5V power supply. So you need to boost the 3V from the battery to get the 5V, but this is bad for the efficiency. Max could you please post the arduino code?

Sorry, I'm not releasing the code right now. But I am planning on uploading the clean and commented Arduino sketch in the near future.

hi, amazing project, Where i can find a arduino board like that? A BOM list should be amazin

Thank you. The board is custom made. Depending on how experienced you are with electronics you can order the PCB and solder the components to it. A link to the PCB, the schematic with all components and the 3D printing files are linked in the project description.

Nice project. The inclusion of a game to help you kill time is also fun. It is amazing how much engineering is involved in even an apparently simple project such as this. I'm working on an enclosure for another project. I'm using a snap fit based on an idea from an modelling video from Adafrult. How did you join the front and back half of the enclosure? Snap fit or screws? I'd be interested to see a close up of how you joined the two halves. Thanks also for the link to the pogo pin programmer. I may make use of that in the project I'm currently working so I can eliminate the right-angle 6 pin header it currently uses.

I am using a combination of a sort-of hinge and a screw to hold the center part inside the shell. The center part itself is glued to the front of the case. It is not a perfect solution though. I have to use a small drop of glue on the edges to really connect the front and back part safely. But there is not much more you can do with an FDM printer and a case this small.

Very nice, and thanks a lot for your documentation work!