Let's move something with mind and body!

Allow me to introduce GetRekt, the team I participated in during the 2016 BCI Hackathon at Temple University in Philadelphia PA, running from Friday evening ( 9/23 ) to Sunday morning ( 9/25 ). And, during the given amount of time, we --- Christian Ward, James Kollmer, Robert Irwin, and of course myself, Andrew Powell --- managed to put together a RC car controlled with a combination of and electromyography ( EMG ) and electroencephalogram ( EEG ) signals! The EMG signals from both arms were used to change the car’s direction, whereas the EEG signals were used to either enable or disable movement! Check out the demonstration video and project details!

But, the question everyone should be asking is “how’d the hackathon go?” Well, seeing as got FIRST PLACE…

Annnd, this project is also submitted to the HackadayPrize2016 for Assistive Technologies competition! Judges, please look at the Project Details, as well as the Log

I should point out, all of the seven other teams who actually participated were given one or more Muscle SpikerShields ( Spikers ) for acquiring EMG, and either a OpenBCI headset or a Emotiv Insight headset for acquiring EEG. For our implementation, we utilized two Spikers and the Emotiv. More implementation details are found under the The Implementation section.

The general idea we had for the car was to first get the car working as a regular RC car, something we knew we could do during the event, and then figure out how to apply the data we would get from just a single Spiker to control the car. Initially, we thought we weren’t going to get anything else but a Spiker. Thankfully, we got more than expected!

The following are short descriptions on each member’s main contributions to the project. Keep in mind, we all contributed in various aspects of the project, not just those described here. So certain responsibilities, such as a connecting the hardware of the car itself, was done by the team as a whole. Christian Ward - Developed Python Class for interfacing with / getting data from Emotiv Insight. This included testing and determining how to best interpret the data ( power averages ) from the Emotiv. 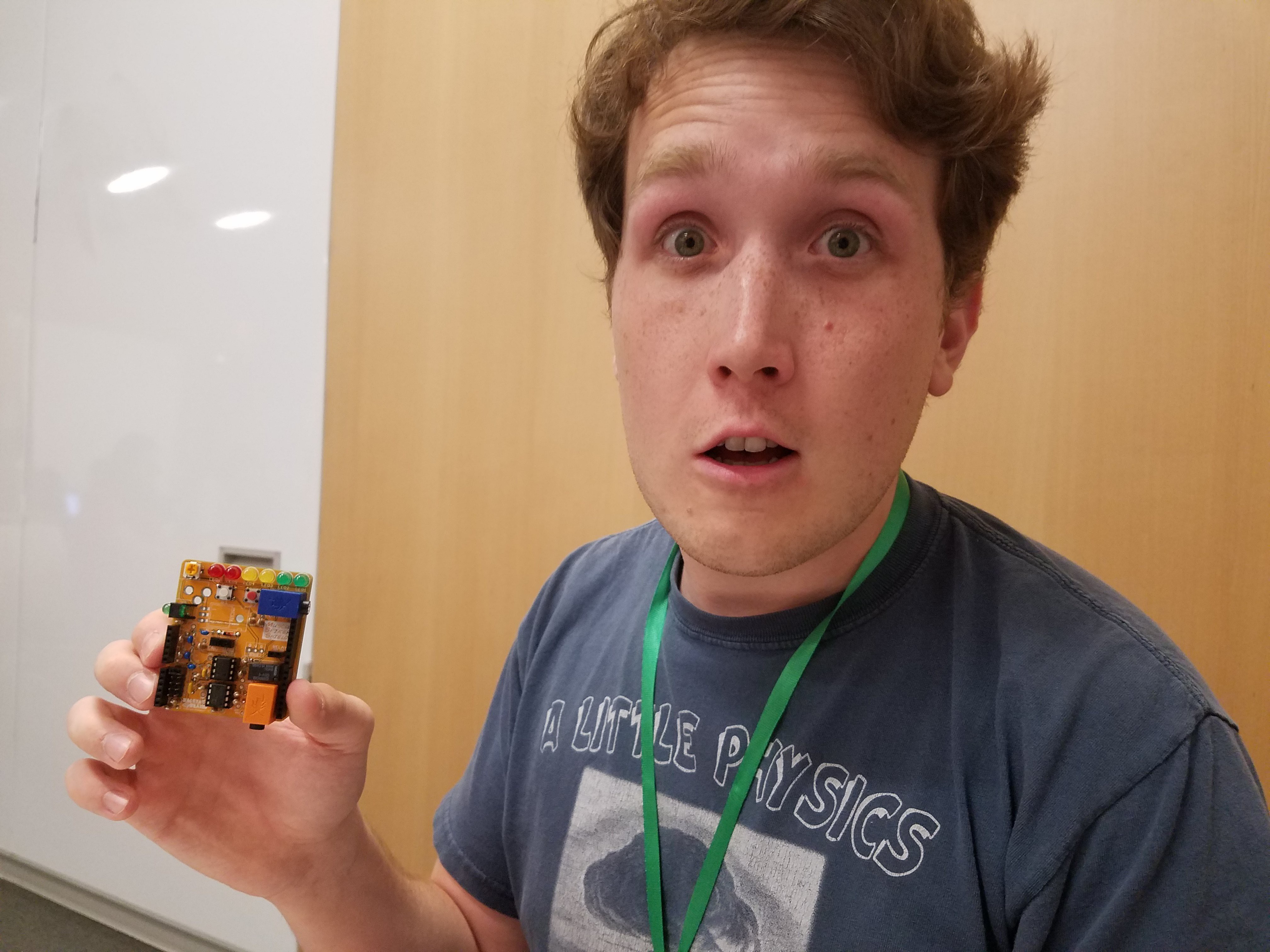 James Kollmer - Built and configured Spikers. This included writing a large portion of the bare metal C code that runs on a Arduino UNO development board to acquire the EMG samples. Was also the “test dummy” in the video. 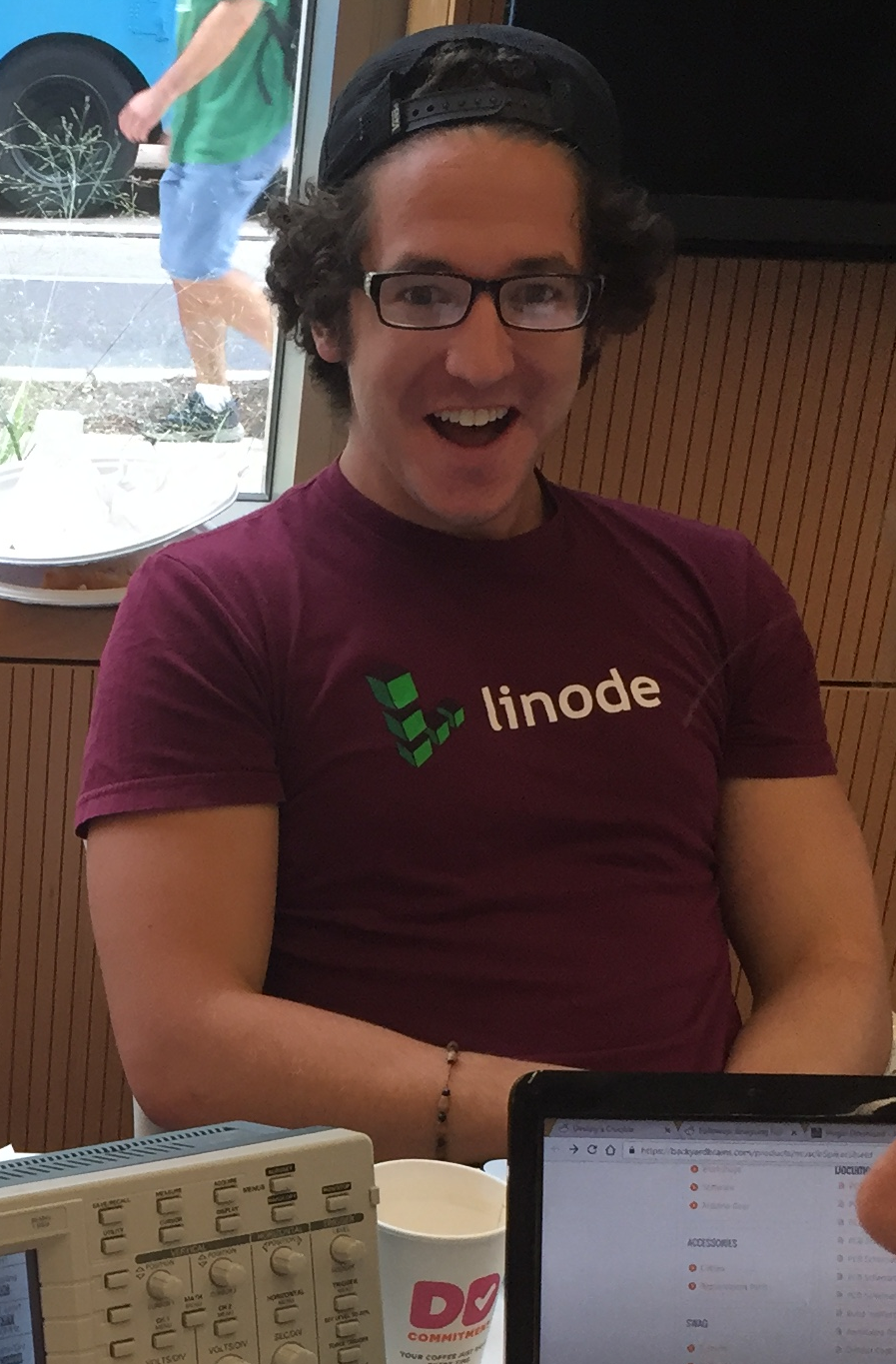 The Implementation: Making it work! 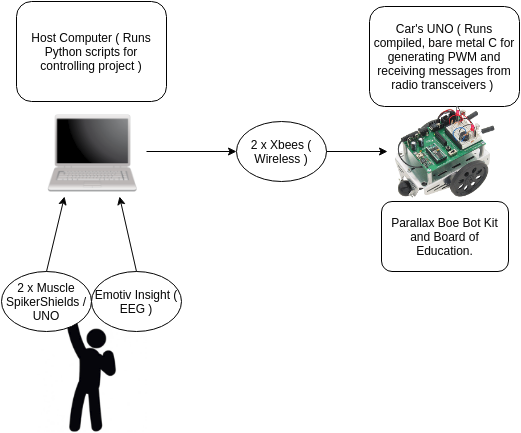 The block diagram quickly describes all the major components of the project! Why these components? Well, a HUGE limitation to our project was the time we had to complete it. Since in reality we only had a day and a half to finish the entire project, we mostly relied on tools we were familiar with and/or could get for free! We already had the Xbee transceivers for wireless communication between the car’s UNO and the host computer. We already had the UNOs, one for the car and the other for the Spikers. Obviously we had computers, one of which was chosen to act as the host computer. The Parallax stuff for the car was lent to us by a professor from our college ( Thanks Dr. Helferty! ). The only tools we were totally inexperienced with were the Spikers and Emotiv.

Arguably the most challenging aspect of the project was interpreting the data from the Emotiv Insight. Sure, it took some effort to put the other components together, but we made sure to choose something we knew we could do quickly ( i.e. in little over a day’s time ). But, the EMG signals were incredibly easy to work with, especially compared to the EEG signals! Initially, we toyed with the idea of using specific body movements --- such as eye movements or tapping our feet --- as controlling mechanisms. However, we later realized the results were just too inconsistent.

In spite of this setback, we managed to implement the Emotiv as an “on and off” sort of switch! Not as grandiose as our original plans, but it gets the job done!

Well, that is! If this project interested you, check out...

Dear Sir,
I hope to do my final year research with mind wave signals (EEG) and I wanna to know how EEG head set works,   how  to get signals (how to get digital outputs from eeg head-set) and connect them with any micro-controller.. etc... And also
I wanna to know what are good eeg head set available in market...Could you please help me.. This is my email :    wisuruthiwanka@gmail.com?

It really depends on what your goal is, I recommend actually going from the ground up cause that will build the most thorough understanding of EEG.

Prepare to do a lot of research and a couple all nighters in front of a Spectrum Analyzer, and Oscilloscope.

For some time I was intrigued by the RamanPi project, so I decided to start a project of similar equipment in a more professional way.
Project Owner Contributor