Use 3 amplified LEDs to sense alarm status LEDs. Send the status to the internet and Smart Apps using Arduino with Wifi shield.

Do you have an alarm system thats not connected to the internet? This project enables access to the status of the alarm via the internet. Check SmartThings app, Alexa, or Google home for the status of your alarm. Or look at the simple web page for status.

The way this is accomplished is using 3 amplified LEDs to sense alarm status LEDs. Send the status to the internet and Smart Apps using Arduino with Wifi shield.

To make it easier to set the thresholds, I'm planning on using 3 Leds to sense, and 3 Leds to show when a potentiometer has been turned enough to enable a transistor for each LED. This way the thresholds can be set without having to change any Arduino code. 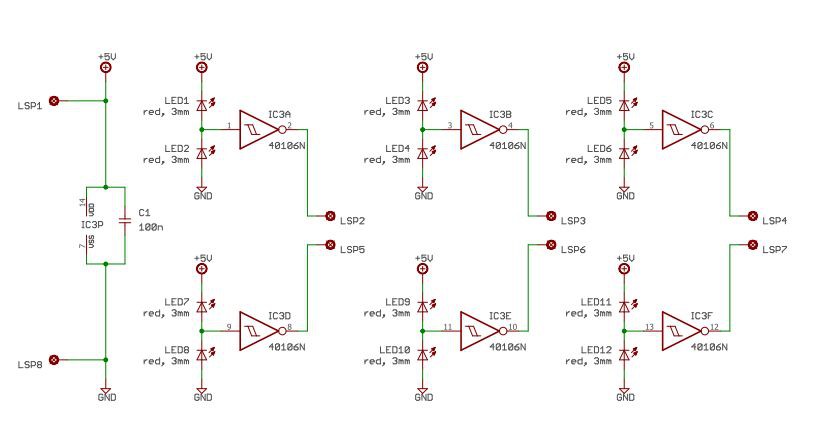 This is Version 1 of the sensor schematic.
"LSP" are connection points to solder a cable to (german expression is Lötstützpunkt, hahaha)
LSP1 = +5V from ARDUINO
LSP2, 3, 4, 5, 6, 7 = Outputs, shall be connected to digital inputs of ARDUINO
LSP 8 = Ground (0V) from Arduino.

A calibration is needed for each sensor. To get familiar with the behaviour of this circuit, do some tests with your individual assembly.

I think it's a great idea. It occurred to me spontaneously that if you wanted to forward an alarm message from more than just one location, you could use a small cheap ESP32 board with an Arduino MQTT client at each location instead of the Arduino with Wifi shield and send the message to a central Raspberry running an MQTT broker. Of course, the Raspberry would also need an MQTT client so that it can evaluate the alarms that arise and forward them as an email or message to a smartphone or PC. The Eclipse Paho MQTT Python client library would be a good choice for the Raspberry, because Python can easily be used to control the processing of the alarms.

Eric, should we open a 'Log' or continue in 'Details' to have the things ongoing (in a chronologic order)? The comments in 'Discussion' are tend to get confusing.

I don´t have any experience how to "develop and describe" here at hackaday. Would you please decide.
For today, I´m continuing in 'Details'.

sounds good. I've never collaborated on here before. I will check into it.

logs are good for what you are putting in details though

@Entunassa thanks for doing all that! What do you think of using a powerful amplifier chip like http://www.ti.com/lit/ds/symlink/lm4675.pdf?HQS=TI-null-null-digikeymode-df-pf-null-wwe&ts=1591322944227

also, still checking the circuit you put there. I mean to use another transistor in a traditional way (after the amplification) to 'enable' a transistor which would then let the status indicator led light up.

or a more basic op amp might do the trick too?

I made a small LED test setup on a breadboard - the results are poor. Eric, would you let me participate a little, could contribute / share my test results.

I can´t send schematics or photos. Would be glad if you would invite me to participate.

Ah, OK. I have tested LEDs as a brightness indicator, but not as a sensor to be actuated from another LEDs light. You hope the dyed plastic housing of the LED filters the "wrong" wavelength and helps to identify the correct color... hmm - interesting :-)
I´m afraid it may not work... the light intensity of status LEDs is often poor and not comparable to "torch-like" 5mm-LEDs.
I will check that here, it´s fascinating.
Also important might be a schmitt-trigger input for the detectors, to eliminate flickering. Do you have a stabilized supply for the detectors also?

re schmitt trigger and stabilized supply, im still an electronics newbie. I will look them up thanks for the idea!

also regarding LDR, I wanted to avoid adding more things to filter for the different wavelengths. Using the LEDs makes it simpler to respond to the colors I want.

Hi, great questions! I was thinking of starting with the leds together at the end of wires just taped at the edge of the panel near the status indicators. Final method may involve velcro adhesive pads. The status LEDS I planned to have on my little board that has the transistors and potentiometers for amplifying the sensed light. This will go on top of the Arduino and wifi shield. The status LEDs are meant only for configuring the thresholds of the sensor Leds. I might put a separate LED indicating the sense circuit is working, I will consider it. Regarding using a phototransistor, if I cant get the the thresholding to work with the leds just using the Transistors and pots, then I will consider that, thanks for the idea! Regarding ambient light, my initial test with a red led seemed to indicate that it wasn't a big issue as it was only responding to another red led. Will have to see as I need to do more testing.

Hi Eric,
I hope I understand it correct: You´ll try to sense the Status LEDs of the alarm base and transmit this information?
Some questions:
Will you glue the sensors onto the case? Or placing a small housing over the Status LEDs (duct taping..?) How to see the Status LEDs at a glance, then?
How do you think to eliminate ambient light influence to the sensors?
Why not trying LDR or phototransistors (more sensitive)?

Looking forward to an interesting discussion.

The 2015 Hackaday Prize
A motion sensing colorful cube that keeps track on Twitter, all for creating awareness about IoT through art.
Project Owner Contributor

Hello guys, i made MOOD LAMP based on Neopixel LED Ring with Nodemcu ESP 8266 and the Lamp is controlled by webserver hosted by nodemcu.
Project Owner Contributor

The 2015 Hackaday Prize
Take 1 AC Lamp, a uController, a normal LED bulb and some color LED strips to get a functional lamp that also can send colored alerts.
Project Owner Contributor