A simple to build, inexpensive PCB drill press that is highly accurate with light and foot pedal.

Build a highly accurate PCB drill press with foot pedal and light for $50. It isn't the prettiest thing I've ever built, but it gets the job done. The drill moves on a linear rail, so there is virtually no play in the X and Y axis, preventing the drill form wandering off center. The built in light makes it easy to find your mark and the foot pedal allows you to use both hands to position the work. I position the PCB with my thumbs and use my index fingers to pull the drill down into the work. It is powered from my bench supply.

I was looking for a cheap and accurate way to drill holes in my PCBs. There are a few interesting low budget mini drill ideas on YouTube.  Then there is Dremel and lastly there are the high end precision drill presses at about $1000.  I wanted something as cheap as the YouTube drills with higher accuracy than Dremel and a few extra features found on the expensive machines.

After a bit of head scratching I managed to cobble up something that is pretty cheap, very accurate and has a couple nice features. If you are looking for a budget PCB drill this might be just the ticket, or maybe it will inspire you to head out to the shop and build something better.  So, "How cheap is cheap ?"  I hear you say. I spent less than $50 for the entire project.

The base has two concentric holes, 5mm center hole and a 25mm hole part way through. This allows some space for the 1w LED bead, mounted under the base. The LED is powered by a 85ma constant current source, made up of a LM317 and a resistor. I have found this to be the best way to drive these LED beads without overheating them. The schematic is shown in the last picture. Light transmitted through the PCB from below is much more effective than lighting the work from above.

I tried a number of cheap 3 jaw mini chucks and found that none of them would reliably center the drill bit. The collet chuck on the other hand centers the bit very accurately and costs less. I use carbide bits with a 3.15mm shank, which easily fit into the collet's 3mm insert. I rarely use twist drills (with different shank sizes) so I rarely have to change the collet insert.

The drill is powered from my bench supply. This gives me variable speed and saves me the cost of building a dedicated power source for the drill. The constant current source for the light maintains the illumination level regardless of the motor speed.

Below are a few pictures of the parts and the assembled drill press. There is not too much more to say about this project.    Happy Building ! 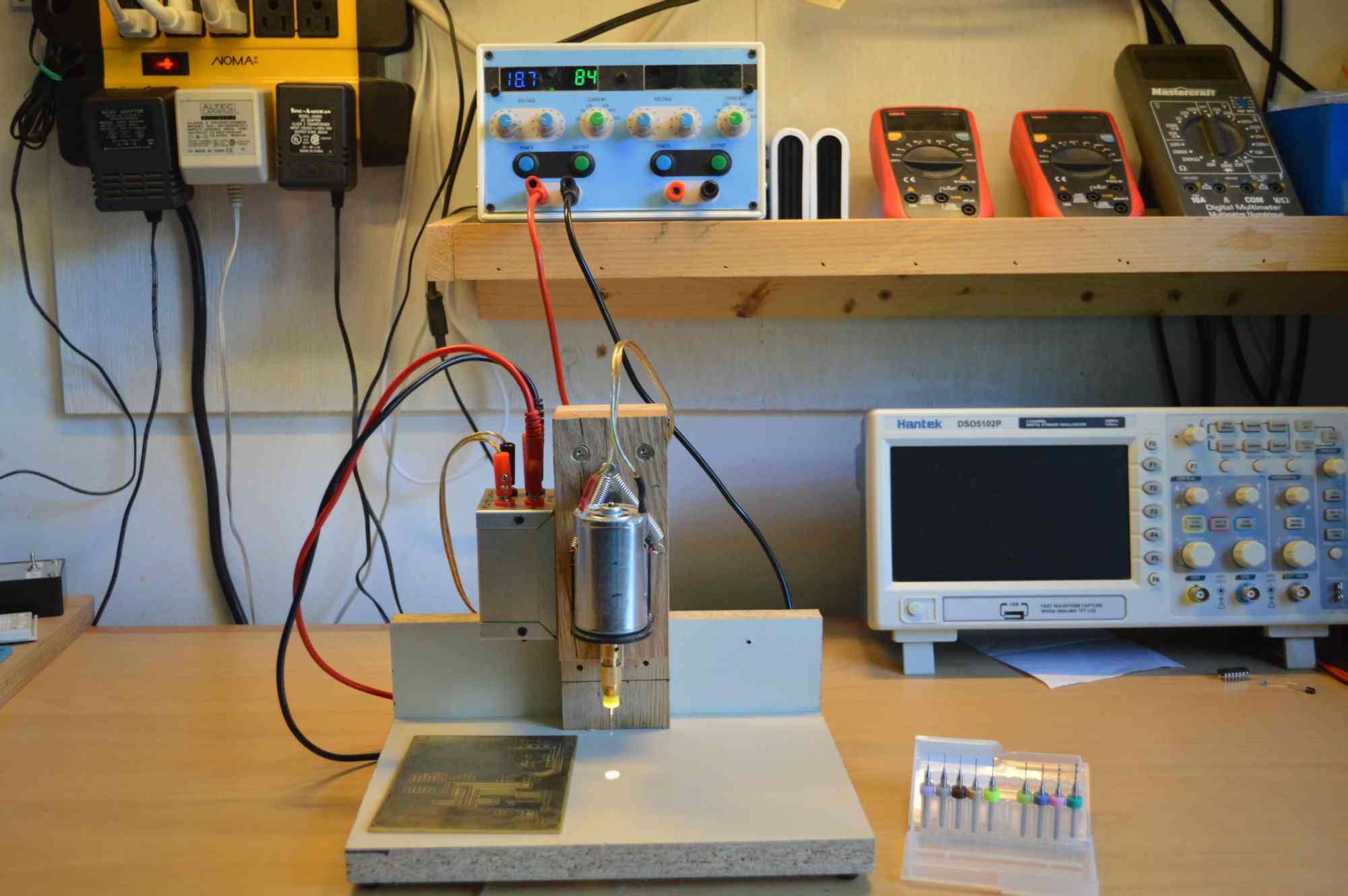 Back when commercial pcbs were drilled by hand, the machine had the drill _under_ the pcb, and an aiming magnifier with mirror above the pcb. The foot pedal raised the drill motor. This made accurate drilling fast and easy, and didn't require dots in the centre of pads, and the corresponding issue of slight misalignment of top and bottom pad dots.

One thing that makes that easier is that the drill only needs 3mm of travel (more if you are stack drilling of course). That makes it possible to just use a long pivot arm, a pull/push rod off the pedal, and not use a linear slide at all.