Take control of your own robot swarm! Featuring a modular shield design to transform the capabilities of each robot!

Attempting to improve upon these designs, I created a programmable and rechargeable set of robots whose functionality could be changed through the addition of a shield. I chose to have two base designs; A line follower and an obstacle avoidance design. The addition of a shield design was used to alter the robots function by overriding the base designs electronics. For example, if the Bluetooth shield were attached to the line following base design, the robot could then be controlled via BT instead of following a line.

The image below depicts my very first attempt at making this miniature line following robot. At the time, I did not plan on expanding much further than making a similar obstacle avoidance robot. However, I felt there was way too much potential in this little guy to let him sit and waste away. That is when this project truly started. I took a look at what went wrong with this design and how I could improve upon it. Several ideas came to mind, but ultimately, I chose to develop a base / shield design. 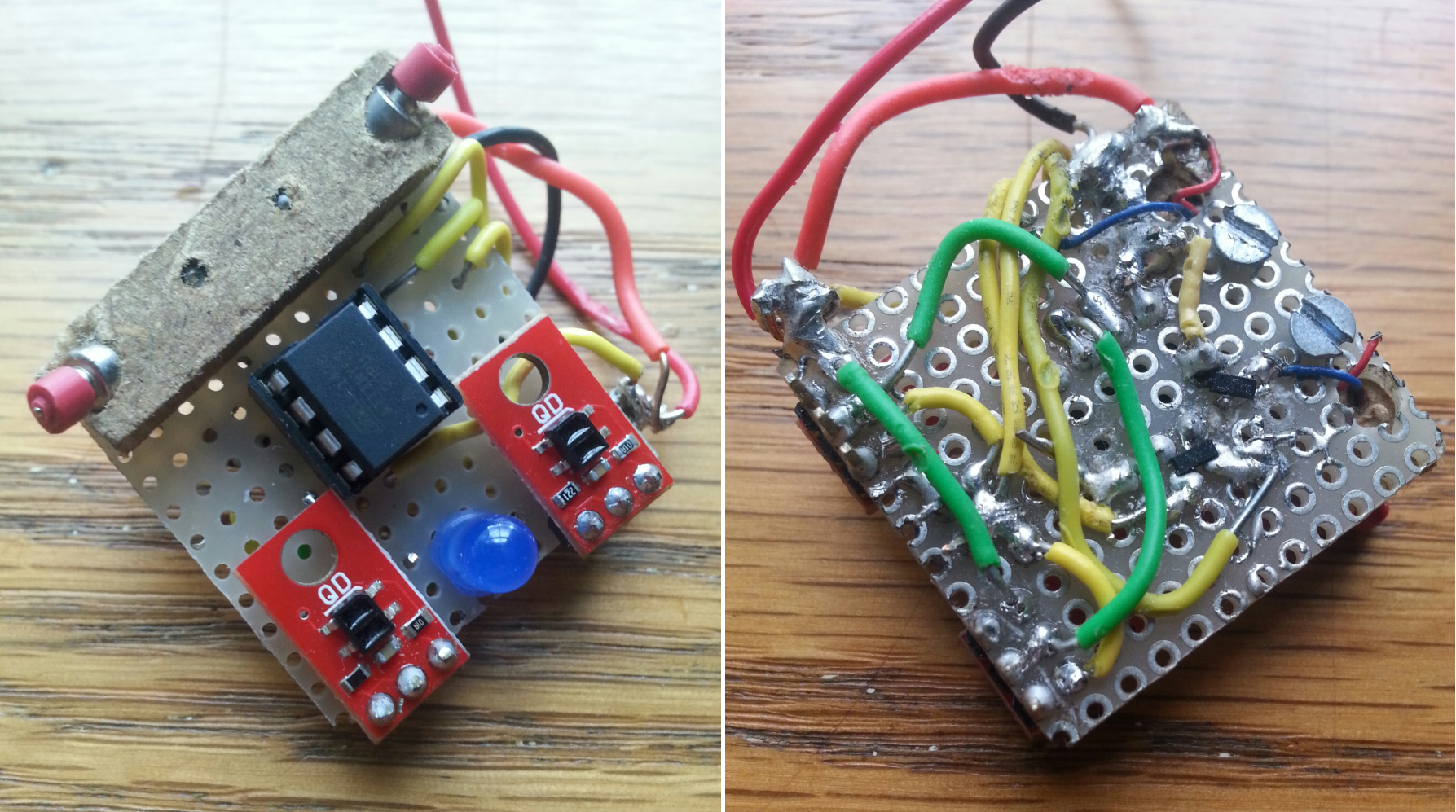 Programming was done externally by removing the Attiny85 Chip, it had no charging capabilities, and major design criteria were not considered such as reliability and reproducibility.

Over the summer, I worked on improving this design. From the blobs of solder and tangle of wires shown above, I created my first PCB shown in the design below. I incorporated an on-board USB programming port, a larger battery, 3D printed motor mounts, and an SPDT power switch. 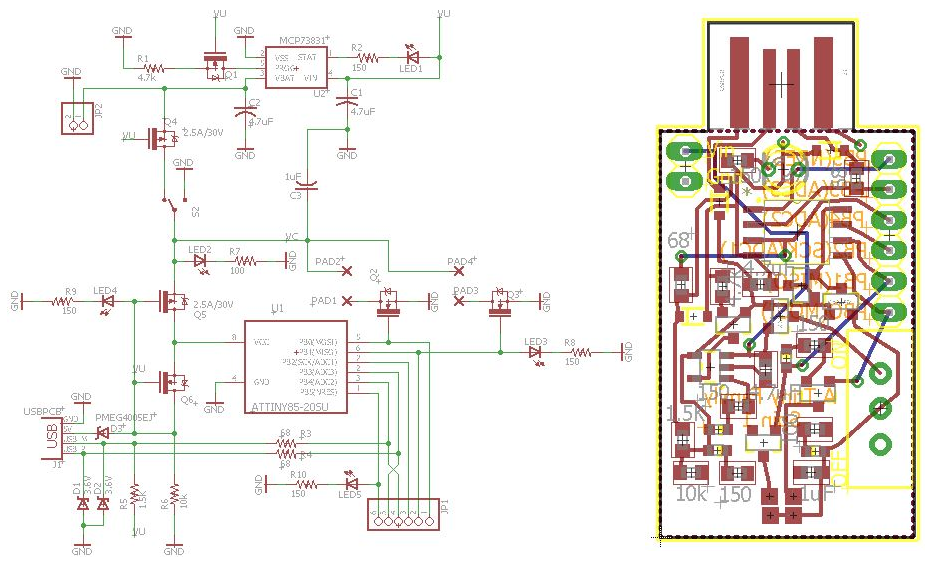 Some of the components I ordered did not work, the electronics to switch between USB power and battery power were wrong, the SPDT switch was too big, and the motors I had were not strong enough to move the robot anymore.

Unsure why the programming aspect did not work with the components I had chosen, I used a breadboard and some spare components to build the bare minimum circuit needed to test the programmer (Basically a Digispark). 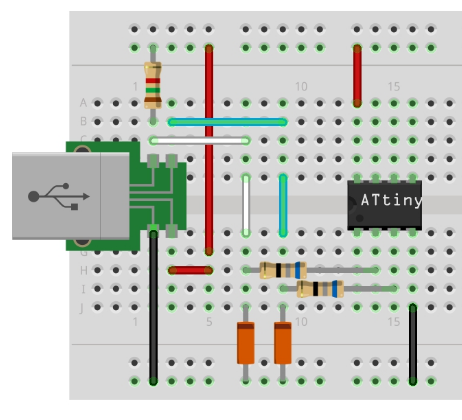 In hindsight, I should have done this first with more aspects of the design before implementing a PCB design...

In this enhancement design, I replaced the switch with a jumper, fixed and verified both the programming and charging components / circuitry, and added the line following components to the design. 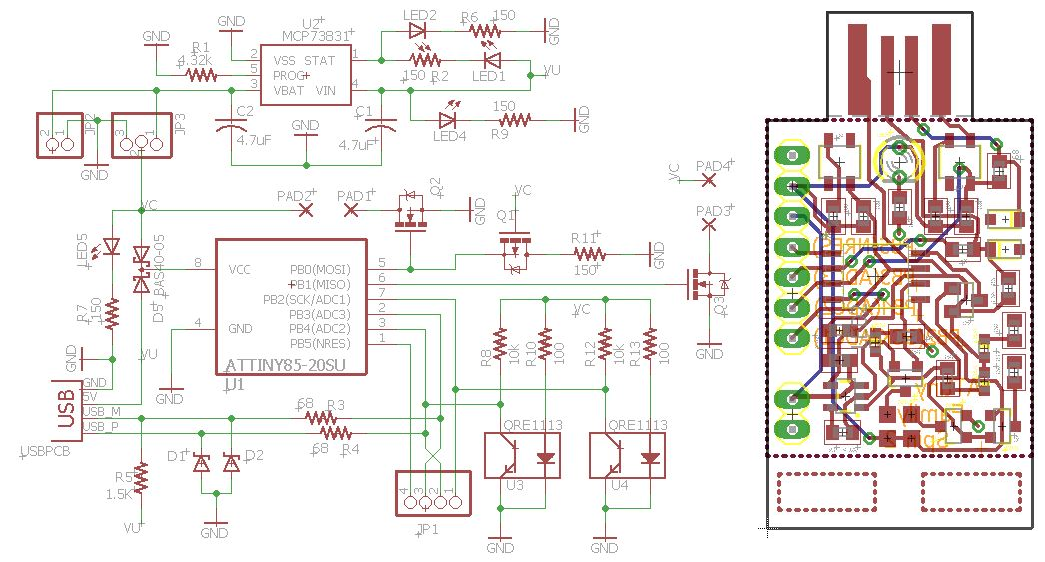 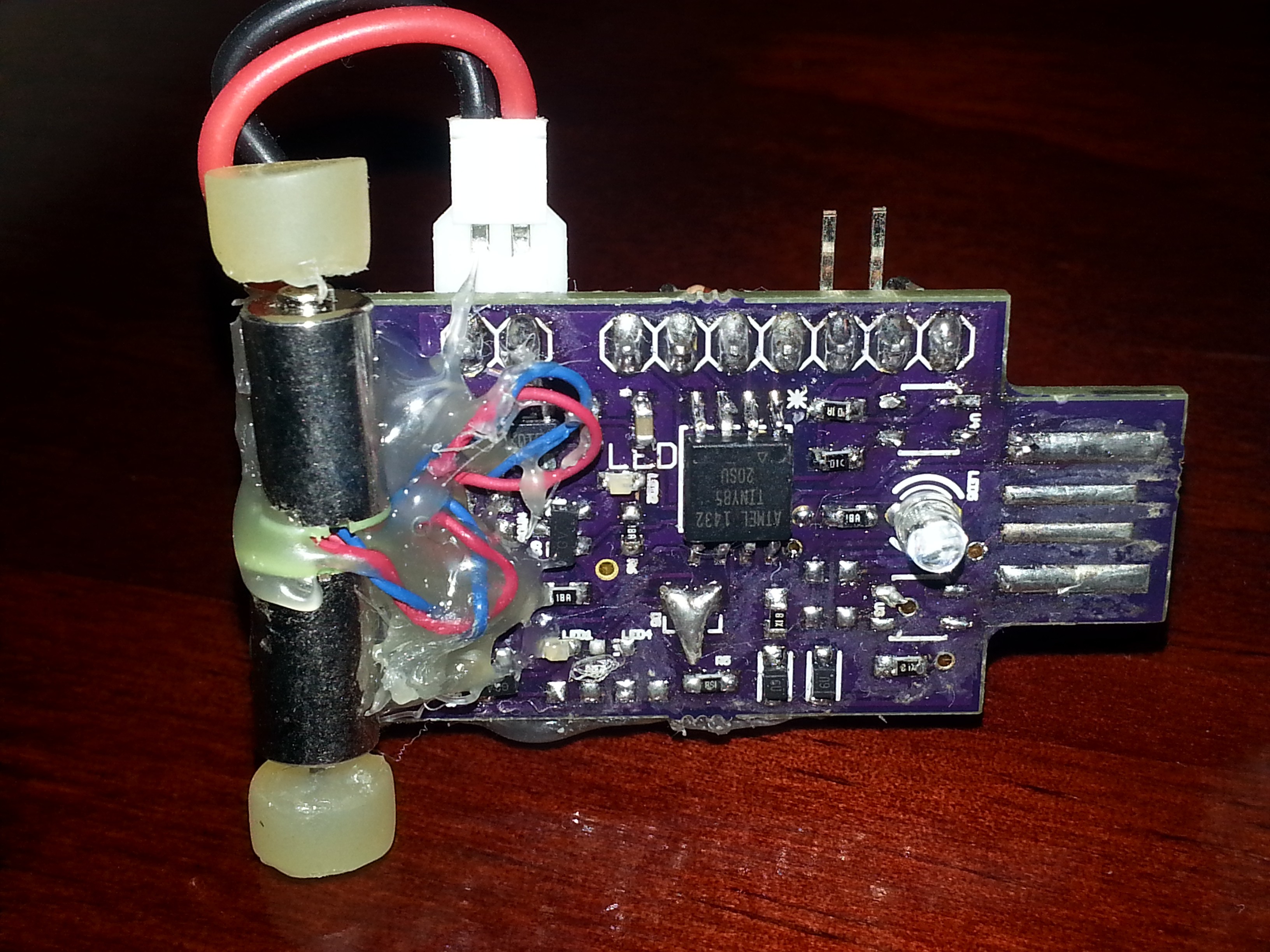 Ignoring the downgrade in motor mounts, I was able to get this design to follow a line pretty well.

Incorporating the last part of the design, the shields. 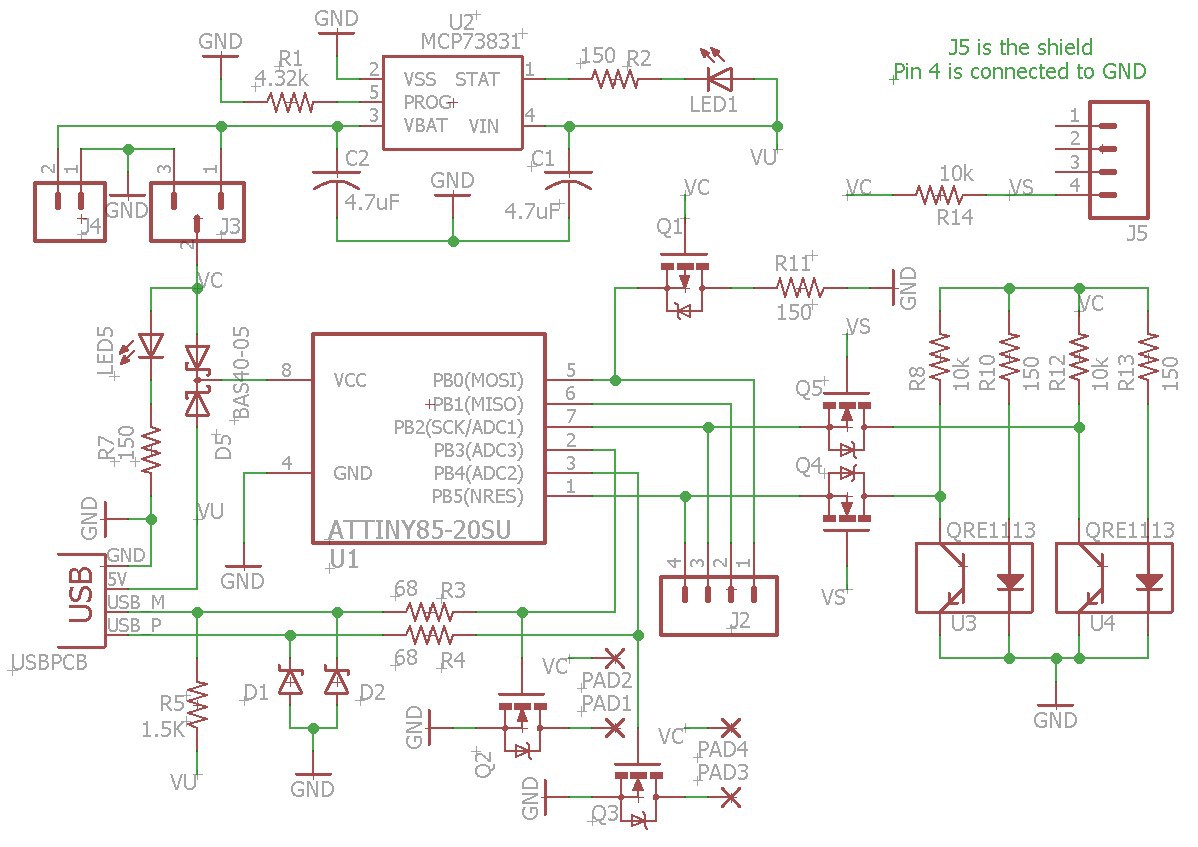 Unfortunately, I ran out of time as school started back up again. I was unable to get this design printed to test. However, once this is completed, the shield design creation and implementation will be easy.

Blue-Tooth: Control your robot from your phone or other blue-tooth enabled device! Just download a simple app to send characters or commands via blue-tooth and configure the robot to listen for these commands.

Obstacle Avoidance: Want both line following and obstacle avoidance? Use this shield to configure your robot to avoid obstacles when the shield is attached.

Solar Cell: Power your robot with solar energy! If your out and about or just can't find a USB port, plug this shield in and charge your robot.

I've made a very rough model of the design in SolidWorks 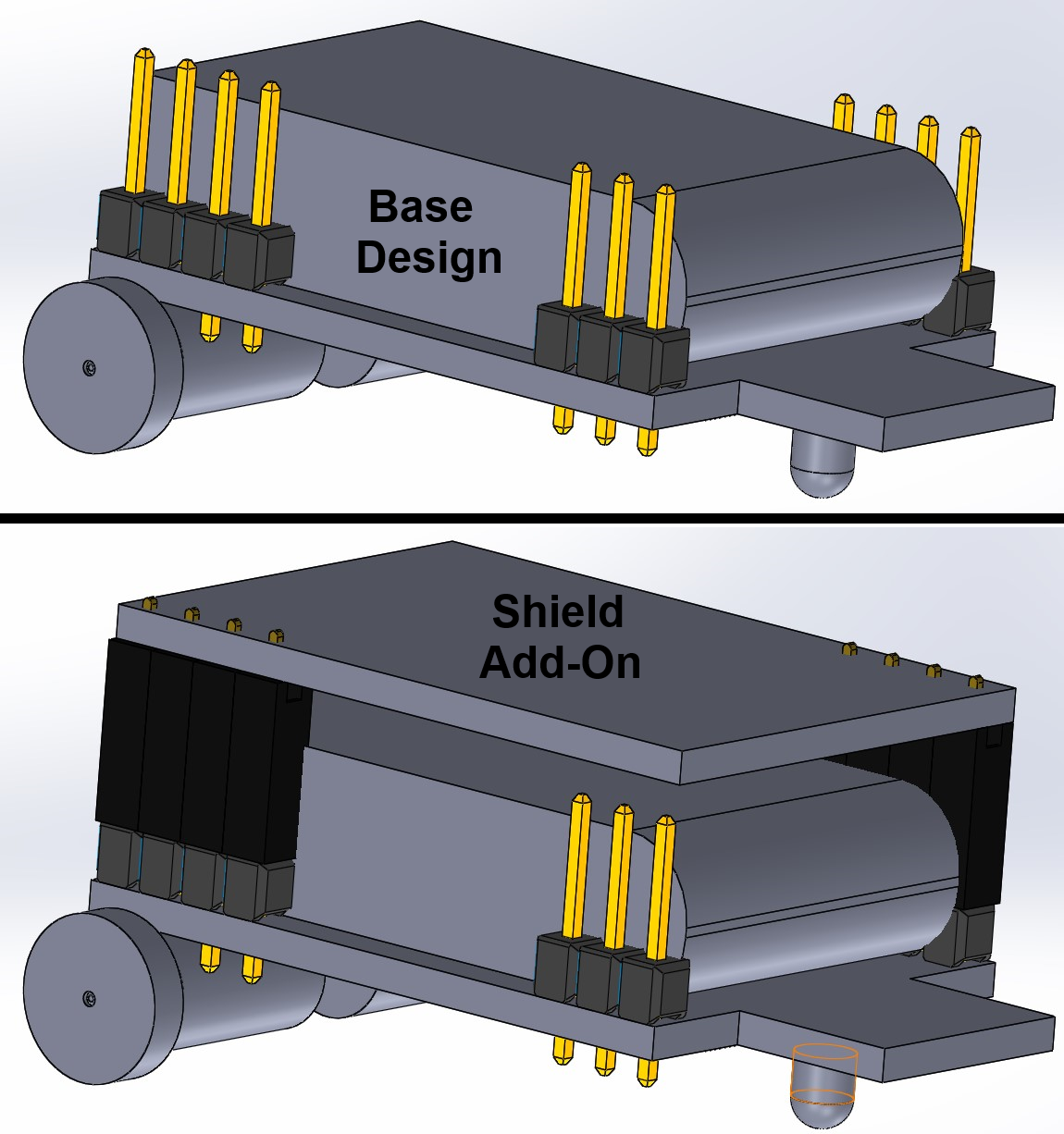 Smaller than a dime, Atmel's Attiny85 is an 8-bit AVR micro-controller with 8KB flash memory, and a 20MHz maximum operating frequency. A specialized bootloader is put onto the Attiny85 to enable PB5 as an additional IO port and to configure the settings required to program it via usb.

Electropermanent Magnets: Imagine a swarm of robots that function independently, but are capable of joining together to complete a task. Each robot would go about doing their own task unless coupled with another robot. When coupled, a predetermined precedence scheme would rule which task was to be followed. Communication would occur through the magnets via PWM signals through the EPMs.

Smaller Design: Using a smaller battery, such as a coin cell battery, the design could be made a little smaller. This was originally considered, but the cost and lifetime of any coin cell battery do not rival that of the small lipo battery.

More Functionality: By incorporating a slightly larger microcontroller, such as the ATtiny84, a single robot could be capable of multiple behaviors without a significant compromise to the size of the robot.

This is my first design for a website for robot designs.
Project Owner Contributor