Lights are one of the most frequently used electric devices at home yet it is also the one that's the least automated. This project will attempt to change that.
Most lights can only switch on or off and that's about it! The aim is to allow not only features that can be had for standard lights such as with a dimmer or a remote controlled RGB light bulb but also some unique and useful features.

One such feature would allow you to forget about a light switches as the light can turn on and off automatically with the help of an integrated motion sensor. This has great potential to save power while reducing the need for manual interaction.
Have several lamps cluttering your living space? 100W of power is enough to light even a very large room (or to blind you in a small one). Built-in light sensor can match the brightness level you find most comfortable automatically. This eliminates any fears of blindness as well as improves light quality and reduces energy usage.

Default boot modes:   Boot mode defines the settings to be applied on start-up.

Control modes:   This is used to set the behavior of the device. Either manual or one of the automatic modes can be used.

Display modes:   Light settings can be controlled manually either from a Bluetooth device or via a web interface.

This project is a practical one and this practicality doesn't end with the device itself or the Bluetooth device that controls it. It currently has 3 sensors built-in: temperature, luminosity and motion detection. All of them are used internally and displayed to the user in the interface. The use of these sensors doesn't need stop there.

Since the light is intended to be fixed in the center of the ceiling the sensors are in an ideal position to collect data. This data can then be used by virtually any external project that need to know the temperature of the room, the light levels or whether there are people in a certain room.

Having this data may even eliminate or at least reduce the need for redundant hardware for certain projects like:

There are plenty of other projects that could work in tandem and even more if additional sensors are added to the light. 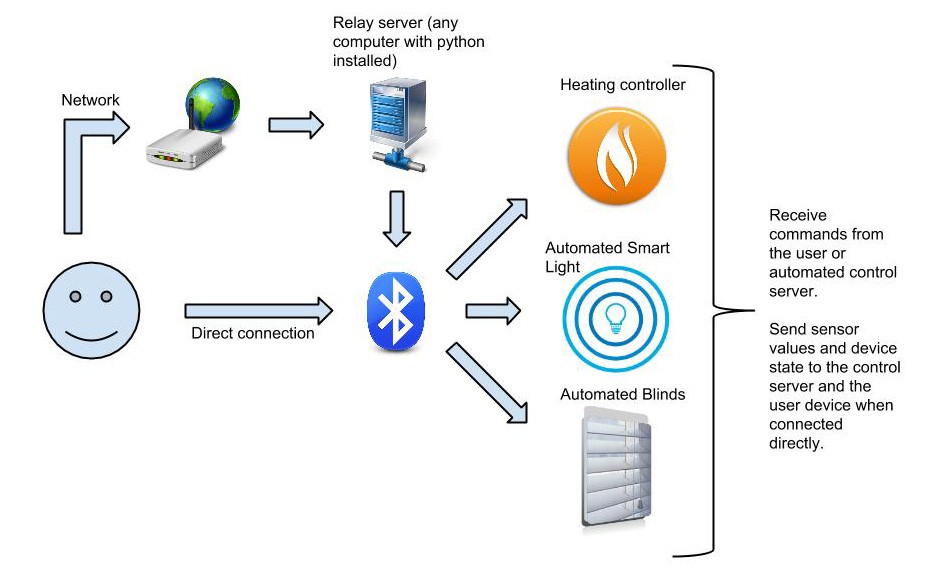 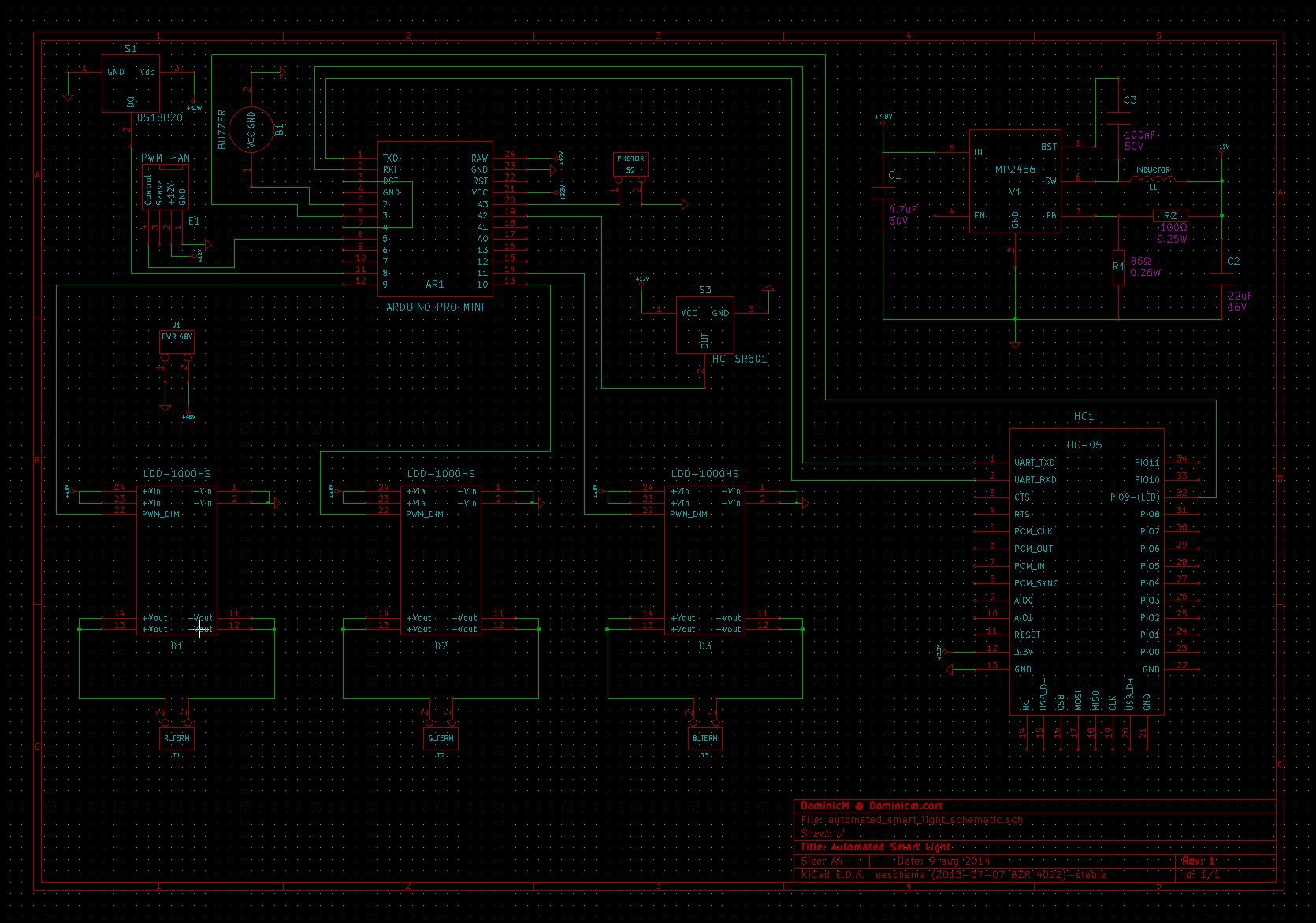 can you make instruction for newbie that they can follow easily to make the project?

The project changed significantly and is not yet finished so for now I don't have instructions, but hopefully in the future.

electrobob wrote 08/05/2014 at 08:03 • point
How about a sensor for the bed which tells the light to go to sleep mode? Might work coupled with the timer.
I think in sleep mode you can have the light turn on very dim so that you can actually see something at night.
BTW, if you need to use covers all time of the year then the problem is reduces as the PIR sensors don't work through covers.

DominicM wrote 08/05/2014 at 13:13 • point
What kind of a sensor for the bed are you thinking of? It might work though hopefully it won't be necessary to get a decent sleep mode function.
I am thinking you would just select night-mode on your phone and there you could define whether you want lights off, dim lights or seething I can't even think of right now.
Didn't consider covers but I feel like body heat through covers or from the exposed parts might be enough to trigger it, will need to test this.

electrobob wrote 08/05/2014 at 13:18 • point
Some sort of sensor to determine the occupancy of the bed, not sure what exactly, maybe pressure ?
PIR sensors work by measuring the radiation given by bodies around 37deg C, as the outside of the blanket will be lower it will not trigger it, unless the sensor is sensitive enough to be triggered by the head or whatever is outside.
Night mode on the phone seems fine, but I, personally, would like this to be automatic.

DominicM wrote 08/05/2014 at 13:53 • point
I completely agree on the automatic sleep-mode though bed sensors might be a bit difficult and not worth the cost. One alternative would be a timer, this would only be useful if you have very specific routine. Another option is to have software detect if a certain computer(s) are on, works well if your pc is powered off only at night.
There could also be some learning, such as time of day and motion activity in bathroom before sleep. All this together should work reliably.

electrobob wrote 08/05/2014 at 16:05 • point
If you manage to find a great solution, please do post it. I have been looking for a solution to this as well: I have 2 lights, one for the night and one for the day, both with PIR sensor. And I would like to make the day one turn off completely when I go to bed...automatically.

Dreistein wrote 07/26/2014 at 16:47 • point
I really like the idea of this project and want to build one myself for my bedroom but I think there will be a problem with the PIR sensor when laying in my bed and trying to sleep. As bedtimes may vary there is a need for some sort of phone widget (Android guy here) in order to activate sleep-time mode.
By adding a RTC you could also implement a wake-light functionalty which rises the light at a given time to wake you up.
Also I wouldn't recommend using photoresistors anymore. The cadmium sulphide types are mostly restricted here in europe. There are better solutions like the NaPICa light sensor from Panasonic.
Keep the work up! :)

DominicM wrote 07/26/2014 at 18:57 • point
Good catch! I did consider the night mode issue. There are 2 solutions here. Firstly you can just turn of the power switch essentially pausing operation of the light until power is restored. Second option is like you mentioned to have a timer. Mobile app wouldn't be ideal as the phone can be off or not connected. Instead I plan on using a python script on 24/7 machine like Raspberry Pi that handles keeping track of timers. RTC is another option but the script is needed anyways so for now I will use software and go with RTC if software is not reliable.
I wan't aware about the cadmium sulphide ban but they are still widely available and if I am not mistaken the ban only affects large manufacturers. In any case like you said there are alternatives :)

2021 Hackaday Prize
A Desklamp for your "Work from Home" Desk with Air Quality Sensor, LoRa, WiFi, MQTT that reminds you to open your windows for Fresh Air
Project Owner Contributor

Hackaday Prize 2019
A bathroom light that automatically changes from bright and cool white in the morning to warm and cozy at night.
Project Owner Contributor

2021 Hackaday Prize
A makeover of a Bike rear light that scans the WiFi Networks in your surroundings, and transmits the Data via LORA
Project Owner Contributor