This gives you a wireless button interface with feedback/notification for any of your network connected projects.

My main interest is using them to control the increasing number of different connected devices around you home, particularly connected lightbulbs like the LIFX, Hue and LimitlessLED.

A key feature is that the button press are decoupled from the RGB LED’s. For example you could use a LED to indicate a lamp on/off and colour as well as indicating an alarm condition or other notification event.

And while my current focus is on controlling lights I don’t what the project to just be a lighting controller. You could use it to control any of your own network connected projects or other products that have an open API.

The buttons are Sparkfun's Button Pad 2x2, the LED's are WS2812's aka NeoPixels, the microprocessor and wifi is the very capable Spark Core. And I have been getting my prototype PCB from OSH Park. The hardware development has been pretty straight forward due to the awesomeness that is the open hardware movement. I also intend in kind to release the board designs under a open hardware licence.

The Wireless Smarthome Buttons communicate via MQTT to a MQTT broker in my case I’m using the open source Mosquitto broker. http://mosquitto.org/ The device publishes messages on topics that relate to the button presses and subscribes to topics that tell it what colour the LED’s should be.

In the future I’d like to integrate with some of the more open SmartHome Hubs like SmartThings and NinjaSphere. This way the buttons can be used for a great variety of tasks and devices without having to write code for each new device and integration. 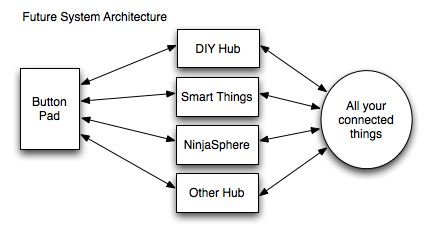 Paul_Beaudet wrote 08/19/2014 at 02:20 • point
If you put the link to your demo video in the details section and press enter the video with appear emebbeded in the page. Wanted to do the same thing and put it in the main discription too, but no dice.