This project's goal was to make a vest that a visually impaired or gamer could use when moving around in their environment(real or virtual).

This vest allows the visually impaired or blind to perceive their environment in 3D through its array of 48 vibration motors. This vest could also be used for gamers that play online or console games to give them cues and other important information. This vest is intuitive to use.

How the vest works:

This project uses a matrix of 48 vibration motors that wraps around the torso. The vest sends tactile feedback to the user in such a way that they can perceive the environment in front of them in 3d. This is done by using varying levels of vibrations. Eight levels of vibration were used of the possible 4096 levels. The closer something is to the wearer (or the louder the sound in gaming), the higher the intensity of vibration in the motors that correspond to the location of the object (or sound). Each motor used a maximum of 60 milliamps. If all 48 motors were running at the maximum speed for an hour, 2.88 amps would be consumed. A depth sensor, a computer, battery pack, and a microprocessor with IC’s (Integrated Circuits) are needed to run the vest. The computer, the battery pack, and the electronics are contained inside a backpack.

The depth sensor used in this project is the Microsoft Kinect. By using the Kinect the vest can still work in complete darkness. This was because the Kinect uses an infrared camera sensor.

The vest would use a stereo video camera (like one from an Xbox Kinect), processors, a computer, and a battery supply. The electronics other than the Kinect would be stored in a backpack.

The skin, a sense organ, contains the biological sensors of touch which are the thermoreceptors (responsible for thermal sensing), the nociceptors (responsible for pain sensing), and the mechanoreceptors (sensitive to mechanical stimulus and skin deformation.) Of the four kinds of mechanoreceptors, the one that is relevant to this project is Pacini corpuscles which respond to vibration.

The ability to discriminate stimuli on the skin is different throughout the body. The two-point discrimination threshold (TPDT) is a measure of how far apart two pressure points must be in order to be perceived as two distinct points on the skin. The measurements shown in the link were used in the design of this project. The link shows the TPDT for different areas of the body. 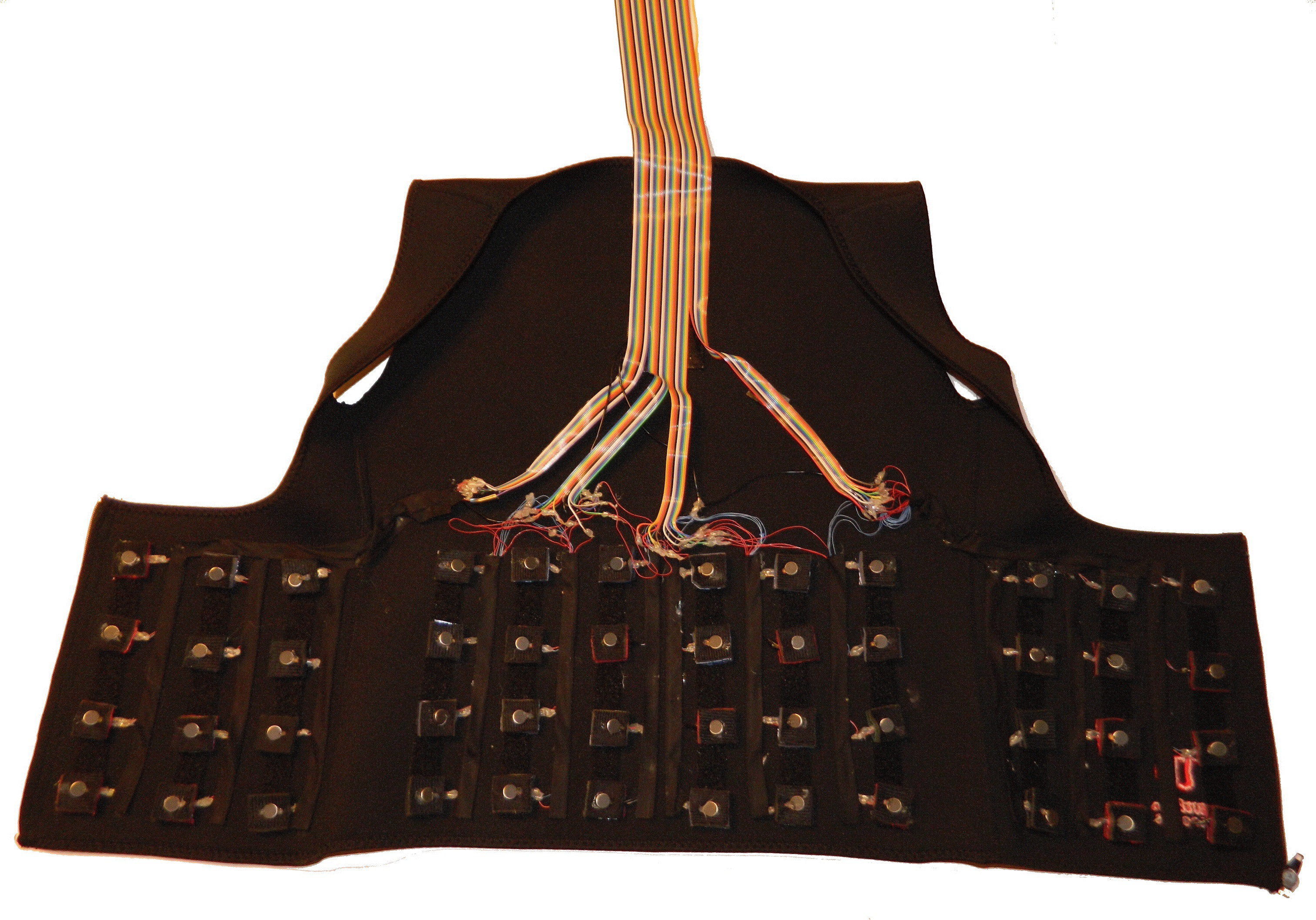 The final design is a purchased neoprene vest with 48 motors on neoprene pads attached with Velcro. The vest has a 50-wire ribbon cable and a ground cable that connect to the electronics box. Solder was used to connect the ends of the wires to the ribbon cable at the back of the vest. Connections were insulated and fabric glue was used to attach double fold bias tape to cover the wires. All ground wires were connected together to a long ground wire.

Both the ribbon cable and the ground cable were attached to an electronics box. This box (see Figure 3) contained a specialized circuit board (see Figure 4) with 48 transistors and two LED driver boards attached. Also in the box was a propeller board, a ribbon cable plug, a USB plug and two power plug adapters. 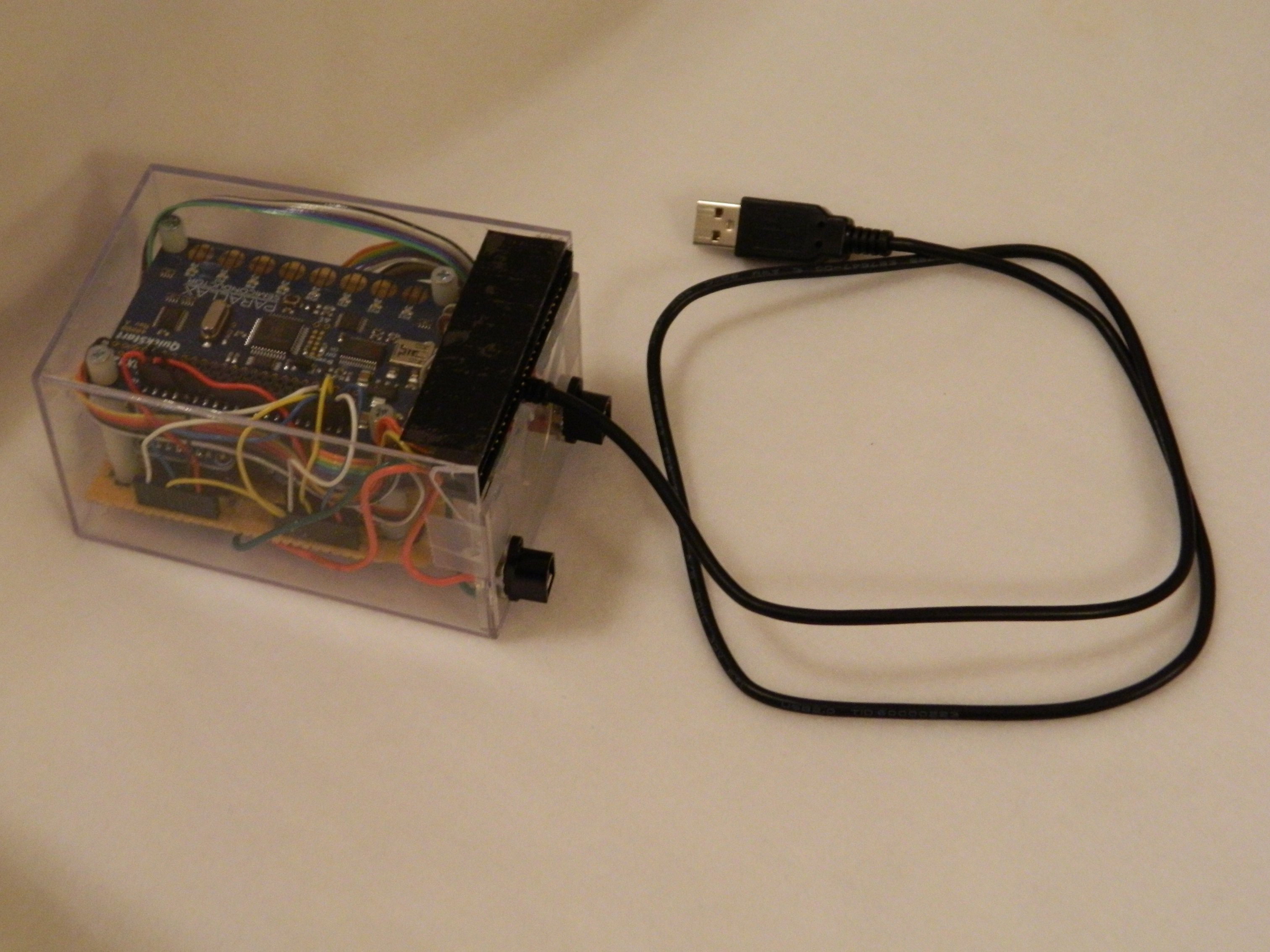 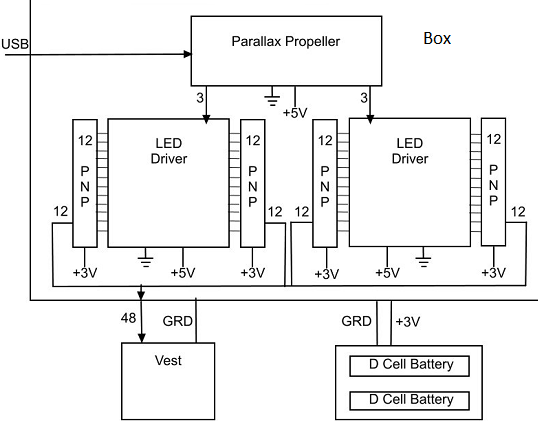 Figure 5 shows the flow of information from the depth sensor to the vest. The C# Master Controller Program (MCP) collects data from the depth sensor (which is the 3D video camera) and converts it to low resolution 3D video. That picture is sent to a communicator program. The C# Communicator Program takes the information from the MCP and sends it to the propeller microprocessor through the USB cable. The Parallax Propeller program takes the low-resolution 3D video and sends it to the LED drivers in the circuit box. The LED drivers convert the depth video...

Hi I know this is a long shot now, that time has passed... I hope at least the author can point me in a direction of how to make my own vest for gaming. I’m 100 percents deaf and I have been playing oculus quest 2 and it’s pretty obvious that I’m alway gettin gunned down cuz I can’t hear people sneaking up or shooting nearby. So yeah I want to make a tactile points for the headset for headshots and a vest but I’m seriously a noob in engineering or anything of like and I cannot afford 500 for bphaptic lol so that’s why I’m here..: talk to me anytime ! Thanks- lu

I have been trying to install Kinect on  a Pi, haven't been able to do that using the xxcorde documentation on github. How have you done it? Could you point me to a blog or something else I could use for this?

The Kinect works with the project for the visually impaired on a laptop.  The Pi runs a FFT program to understand what the sound from the video game means.  So they are two separate things that do not work together.

Not Just Another Coffee Table