Adulteration is one of largest prevailing problem in the world. Adulteration means addition of another substance to a food item in order to increase the quantity of the food item in raw form or prepared form, which may result in the loss of actual quality of food item that can even be dangerous to health. These substances may be other available food items or non-food items. Although several techniques are used to find the adulteration they are completely complex, inaccurate and testing varies from one substance to other. There are several adulterated food substances released into the market and people cannot identify it easily. People find it difficult while choosing the best food substance. They cannot rely on chemical or manual testing while buying products from a store/grocery. Hence a suitable device that can be used for finding out adulteration in almost all substances is essential.

The Federal Food, Drug, and Cosmetic (FD&C) Act 2888) states that food is "adulterated" if it meets any one of the following criteria:

Food also meets the definition of adulteration if:

Further, food is considered adulterated if:

Milk: Add a drop or two of iodine solution to a few drops of milk. If the solution turns blue then, it contains starch (which is used to give it a thick, rich texture).

Mustard oil: Take small amount of mustard oil in a test-tube, add a few drops of nitric acid to it. Shake and heat the mixture for 2-3 minutes. Appearance of red colour indicates that argemone oil is added to mustard oil.

Turmeric powder, dals and pulses: Take a spoon of dal, turmeric or besan powder and let it dissolve in lukewarm water. Add a few drops of hydrochloric acid to it. If it turns pink, violet or purple, it shows that Metanil yellow is present in it.

Sugar: Take a spoon of sugar, dissolve it in water and allow it to settle. While sugar will dissolve in water, chalk will not and thus will remain as residue at the bottom. 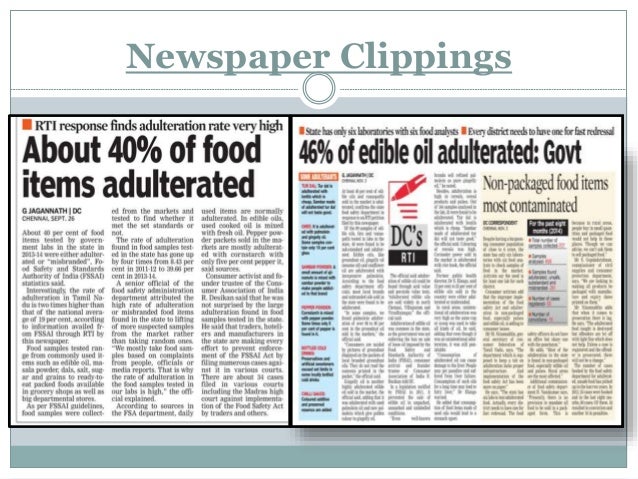 This "AI based adulteration detector" device consists of a micro-controller, a camera module and power supply. The OS must be programmed in a such a way that it must start image processing as soon as the device is powered up. The High Definition (HD) pictures of original and pure substances are obtained and their characteristics & properties are analysed and these data are stored in the SD card of Raspberry Pi. The pictures of test samples are then captured through an camera module attached to that of Raspberry Pi. Several filters are applied to the test sample because various...

Using hyper spectral imaging the detection of adulteration of food
is very convincing. I have personally worked on it (on the surrounding electronics systems part not on the algorithms) and I have seen the results first hand.

If you are really serious about this IMEC is doing very good work on hyperspectral imaging. They have reference platforms available which you can try to integrate too. You can also search for videos on youtube using "imec hyperspectral imaging" which will give you the results what you are trying.

Thanks bro! But what I'm worried about  is the cost of hyper spectral camera
Is there any link that you could suggest me for buying hyperspectral camera

Yes and no. You can check out Adimec. You can also ask for IMEC for their starter kits. Please mail them and see what happens.

Hey G.Vignesh, I  have a link for you over at Plab's website, it's a Mobias Camera that's right up UR alley; http://publiclab.myshopify.com/collections/diy-infrared-photography

Check it out, there are a number of individuals there who have used this HD camera set up with the filter pack and have had success with hyper spectral imagery.

So basically this detects food containing "filler material"?  Aka, bad food.  Man, food is BAD in the U.S.  That would be SO useful for us.

Don't know much about finding filler material bro! I have personally experienced adulteration at smaller scales because I used to buy smaller quantities from wholesale products like 200 grams of wheat flour or chilly powder in market / stores unlike obtaining packaged products in UK USA etc

Anyways finding the quality of the substance becomes necessary. I think placing the sample before the camera and analysing it would be enough to find the solution for this type of problem and thats going to for the version 1.0 of this product!!! But finding out "filler material" is completely of the box for me bro!! :-P will try that one in the future :D

OK, I think I understand the definition of 'adulterated' now.  Basically food unfit for consumption, correct?  That would be an interresting thing for a uC to detect. Cool!

Oh thanks for the info esot!!
Will check it out..

Hi, this is a great project.
I understand that the picture is taken in the visible spectrum by a casual HD camera?
What do you think about adding some hardware to probe other characteristics, like polarization, IR and visible spectrum?

You are spot on sir! ;-) That's the idea sir... We are testing it with visible spectrum first for few compounds. But as you said earlier to find some adulterants (eg: honey) other spectra might be required because of polarization problems with visible spectra . I have done it for chilly powder and results were convincing!!

I saw the answer from Corne van Kessel and it made me think about other low cost alternatives, for example:
* Inducing vibrations to detect density (and materials of different densities)
* Something similar to electrophoresis where small polarized molecules move quicker than larger ones.
The former solution requires a cup (may be with a non circular form) and a motor, the later is completely static and requires two electrodes, some time and a camera.
* But there are also low cost way to create spectrum information, because if you use ML you do not need narrow spectral lines, like you would require for signal processing. A simple grating is enough.

But searched for 50$ piece camera and found nothing. May be they've not released it in the market. All I could see is 1000$ worth cameras!!
The main cost of this project is aimed at around 150$-250$

Try virus detection with that setup

Great use of digital signal processing!!

How can I get one IBM Watson ? I'm not sure I can pay it, or even its electricity bills :-/

Since the final prototype/product requires high level Machine Learning technique to detect adulteration at any level, my idea is AI similar to that of IBM Watson could be used.

That AI should be cost effective also and I'm searching for similar kind!!!

Nice concept.. It would be of great help to various countries like INDIA.hats off for such ideas sir

This one is a major problem in the world. Hope people support this one so that I could really build that into a product.