Wearable Navigation Assistance for the Blind

Pathfinder is a wearable device that translates distance into haptic feedback. Users just wear the wristband (or glove) and point at objects up to 500 centimeters away, and feel gentle pulses at their fingertips corresponding to the object's distance. It’s designed to give the user greater freedom of motion and longer operational range than traditional navigation solutions for the blind, such as the cane. I incorporated research ranging from embedded electronics to the neuroscience of touch to turn this simple concept into the best prototype I could, before sharing the device with my local community center for the blind.

Author's Note: This writeup pertains to Pathfinder's "Milestone 1," which is my first really usable prototype that somewhat resembles a consumer device. I'm currently working on Milestone 2, which adds smarter haptic feedback and moves to a fully custom, integrated design. That's what future project logs will be documenting. 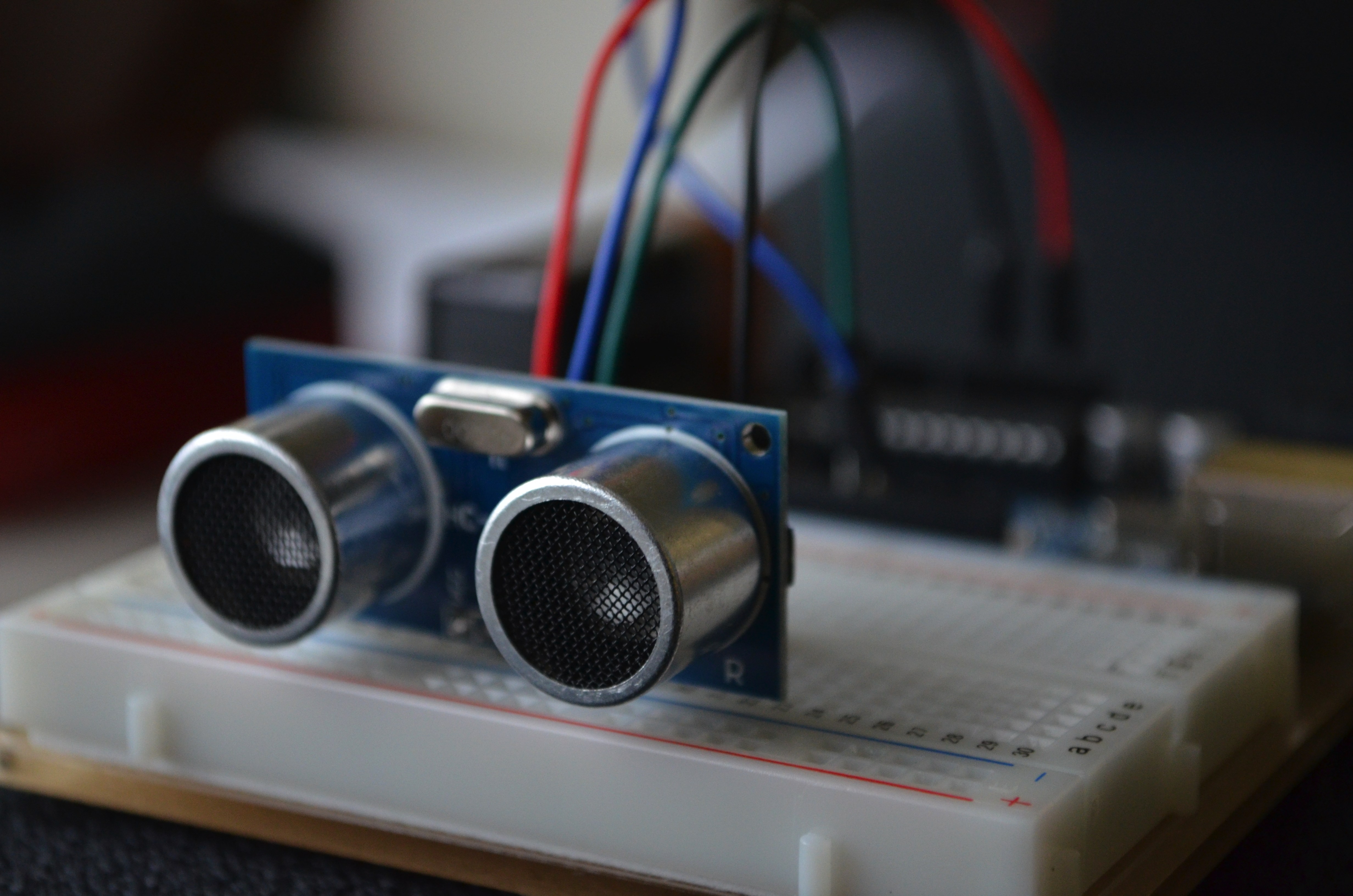 I began by sourcing the cheapest ultrasonic sensor I could find: the $2 HC-SR04 sensor. It incorporates a transmitter and receiver, operating on 60 kHz sound waves, along with their appropriate drive & timing circuitry into a single module. I then interfaced this sensor with an ATmega328P micro controller, at first through the Arduino platform to make development as simple as possible. In testing this sensor, I measured consistent 0.5cm precision out to a maximum range of 500cm, with a 30º cone of detection. However, accuracy remained off by around 5%. This was due to the impact of ambient temperature on the speed of sound, and so I integrated data from a TMP36 analog temperature sensor to achieve accuracy within 1% of actual values.

I used small, circular motors built for haptic feedback in mobile devices. A motor is placed on the pinky fingertip of the user's non-dominant hand, allowing for good tactile sensitivity while remaining minimally intrusive. To convey intensity, we manipulate the frequency of gentle pulses, whereas most traditional systems vary vibration strength. This is a really delicate process, as having the best sensors and data in the world won't help unless I can actually convey that to the user. My main challenge so far has been resolution: It's fairly easy to tell apart, say, the different quartiles of the systems' range, but we need to do better. First, I asked a focus group of future beta testers to identify the ideal range for an assistive navigational device. Most agreed that 250cm, or just over 8 feet, would be a useful extension over their existing options and that they would see diminishing returns in utility after that point. For my first prototypes, I just used a simple linear scale that changed the delay between haptic pulses. What is a haptic pulse, you ask? Even simpler: A uC pin goes HIGH for roughly 20 milliseconds, driving the gate of an N-channel MOSFET to switch a simple ERM motor. I have big plans for this cobbled-together assembly, however, and I'm now looking at LRA motors + specialized haptic driver ICs. 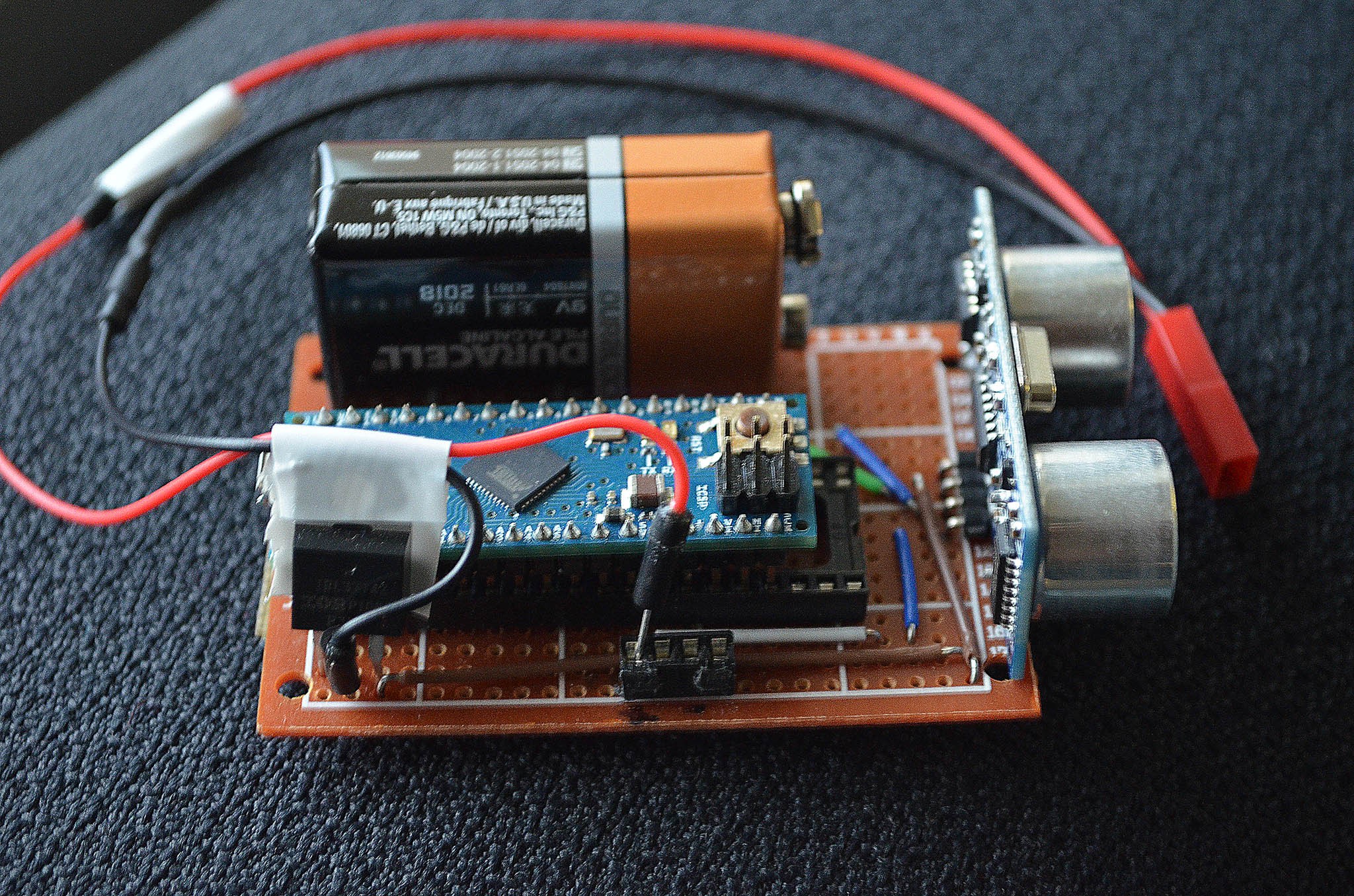 I now had to integrate the system into a single device. I switched to a much smaller controller board and arranged the parts on a prototyping grid, hand soldering the connections with jumper wires. A 9V battery provided a primitive, yet portable power source. This early prototype measured 50x70mm, and weighed 115 grams. The assembly was attached to a utility glove with velcro and tested; users reported much of the obvious: the device was bulky, had poor weight balance, and the loose glove made for poor tactile feedback.

From Prototype to Product 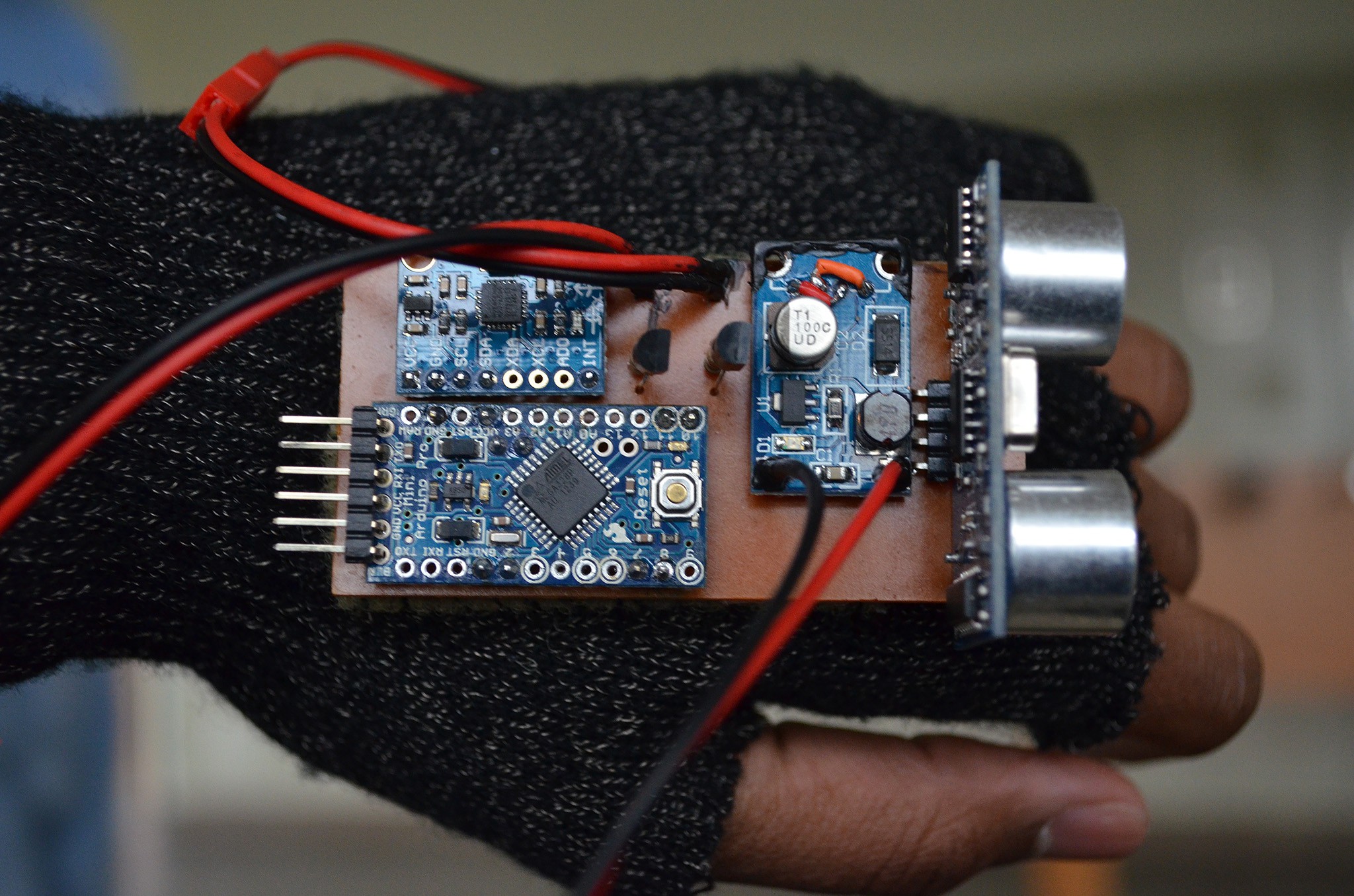 With my basic design vision physically realized, I became significantly more ambitious. Over a two week development sprint, I learned and employed EAGLE CAD to create PCB layouts for my prototype, which enabled me to add features such as an accelerometer/gyroscope, support for lithium-polymer battery packs, and an additional wrist motor for complementary feedback patterns; all while significantly reducing the footprint. I manufactured the 35x55mm board with resources from my school's chemistry lab (cupric chloride etchant, as well as the essential fume hood + personal protection equipment!. The glove too was replaced for a more elastic variant, and the motor was sewn into the fingertip to ensure tactile sensitivity. Overall, the board was 45% smaller and weighed 60% less (45g), while improving functionality. Awesome project! Any updates for 2016?

What do you think about installing one of these as a head mounted unit rather than on the wrist allowing range detection using just the normal head movement to test a particular direction?

Get out of my head! Haha, it's so weird but I was thinking of doing this exact same thing several years ago. Bought all the parts (bicycle mesh gloves, miniature vibrating pancake motors, ultrasonic sensors) but nothing eventuated of it. Now I come across your project and I'm like, wow, that's everything I need to get started again. Even though the need for mine is no longer there (I had a friend I was going to gift it to, but sadly he passed) it would still be a cool project and if I keep it with me, I may find someone who I can give it to in need.

Anyway, not trying to steal your thunder or anything but just find it amazing that such similar ideas can occur elsewhere. Great project and I'll be looking forward to stealing code etc for inspiration! Suppose I at least owe you a skull for that :D

Hello Arun, there is a lot of info on this page, and also a link to the git repo. This project is not set up as a tutorial (not all projects on Hackaday.io are). Probably best to set up another project and start tinkering on your own. If you run into specific problems, people around here will be ready to help if you ask nicely. Good luck!

The sensor is supposedly good to 10m (!) but I've personally validated it to ~600cm. After that, two things happen - first, we lose centimeter level accuracy, and second, the cone of detection just gets too wide to be useful, i.e. extraneous objects, well off to the sides, are detected. So I cap the maximum range in software to just 500cm, which I think is pretty good range for daily navigation. On the other hand, mapping that massive distance range to haptics turns out to be really tough, and there's a lot I have to say on that in the very near future.

The accelerometer (and gyro, I'm using the MPU-6050) is really important to the device's practicality. For one, the use case that initially earned it a spot on the board is orientation detection; when the device is held down to the floor for, say, >5 seconds, the motor should probably stop bothering the user with reports of what is ostensibly the floor! Similarly, maybe a minute of little to no motion could put the device to sleep. Pretty simple, but when I get more comfortable with the IMU, I might even be able to do things like sense the user's gait and disable the device as the hand passes a critical angle, but still detect when the natural walk pattern is broken and thus allow downward sensing when explicitly desired. Why is it so important? Battery life: aggressive sleep is vital to be able to drive a motor all day! Furthermore, buttons would be out of the question for this device, so maybe hand gestures could be used for a very primitive UI. I'm still finalizing the hardware for now, so unfortunately I haven't been able to take a deep dive into the MPU-6050 and all its craziness.

Again, I'll be sure to address all this topics in a more formal writeup. I actually have been working on this on and off for the past year or so, and but I'm only just getting settled on Hackaday Projects :). Thanks again for the comments!

davedarko wrote 08/13/2014 at 22:34 • point
Hey, cool idea! what are you using the accelerometer for? Seems like an interesting experiment to blind fold someone and let him use only those gloves to go around. Any reasons you took a teensy and not something "smaller"? anyway, nice project.