A haptic vest for orientation for the blind

These 20 projects are the semifinalists of the Assistive Technologies category of the 2017 Hackaday Prize.

Haptic feedback systems for helping blind people to orient themselves exist and are researched for a while. The combination of a depth camera and vibration motor arrays e.g. done by Sean Benson (https://hackaday.com/2014/09/21/thp-semifinalist-a-haptic-vest-with-48-vibration-motors/) seems to be promising to help blind people to get a feeling of their surrounding. In 2015 one of our students, David Anton Sanchez, built a similar system (http://hci.rwth-aachen.de/openvnavi), with 16*8 motors. In the Personal Photonics project, sponsored by the german federal ministry of education and science we are now on the way to make this vest rebuildable as easy as possible for everyone as open-source project

The main concept is the same as in David Benchoffs and David Sanchez vest: Using an array of vibration motors controlled by an image from a depth camera - so each vibration motor acts as an image pixal and vibrates stronger the nearer an object is at this pixel position, helping the visual impaired to get a feeling of their surroundings and know where to go and where not.

Since the vibration motors can be worn under the clothing, the system is (normally) invisible besides the sensor system, and uses with the abdomen an otherwise unused sensor channel, not disturbing other already used for visual sensory substitution.

Instead of the Kinect or the smaller Asus XTion we used a Intel Realsense camera, mainly because the camera is still a bit smaller. This sensor system is now the part which still needs rework because of the inherent problems of the infrared based camera: Sensor angle, problems with sunlight, and the non-detection of glass.

An Up board was used instead of the Pi for camera processing, just because it was the system recommended for the Realssense camera (intel robotics kit). Data is then send by I2C to eight custom-made PWM expander boards (based on the Adafruit Servo expander boards), but including both a PCA9685 and the necessary driver for the motors. Each board further includes a voltage regulator, allowing the system to be fed by a normal 5V power bank.

For easier rebuild, all encapsulations are made by a standard FDM 3D printer, and wiring with normal flat wire and crimp contacts / pin header on the driver board (could be also replaced by just soldering).

Motors (and driver boards as well as cable routing) are held in place with the 3D printed clip form in corresponding holes in the textile for a clean setup.

Since weight is evenly distributed the only heavy component remains the power bank, and instead of a belt system we used allow multiple persons to test the system on faires with quick changes, one could normaly just use a tight textile, make the holes into and mount the electronic. 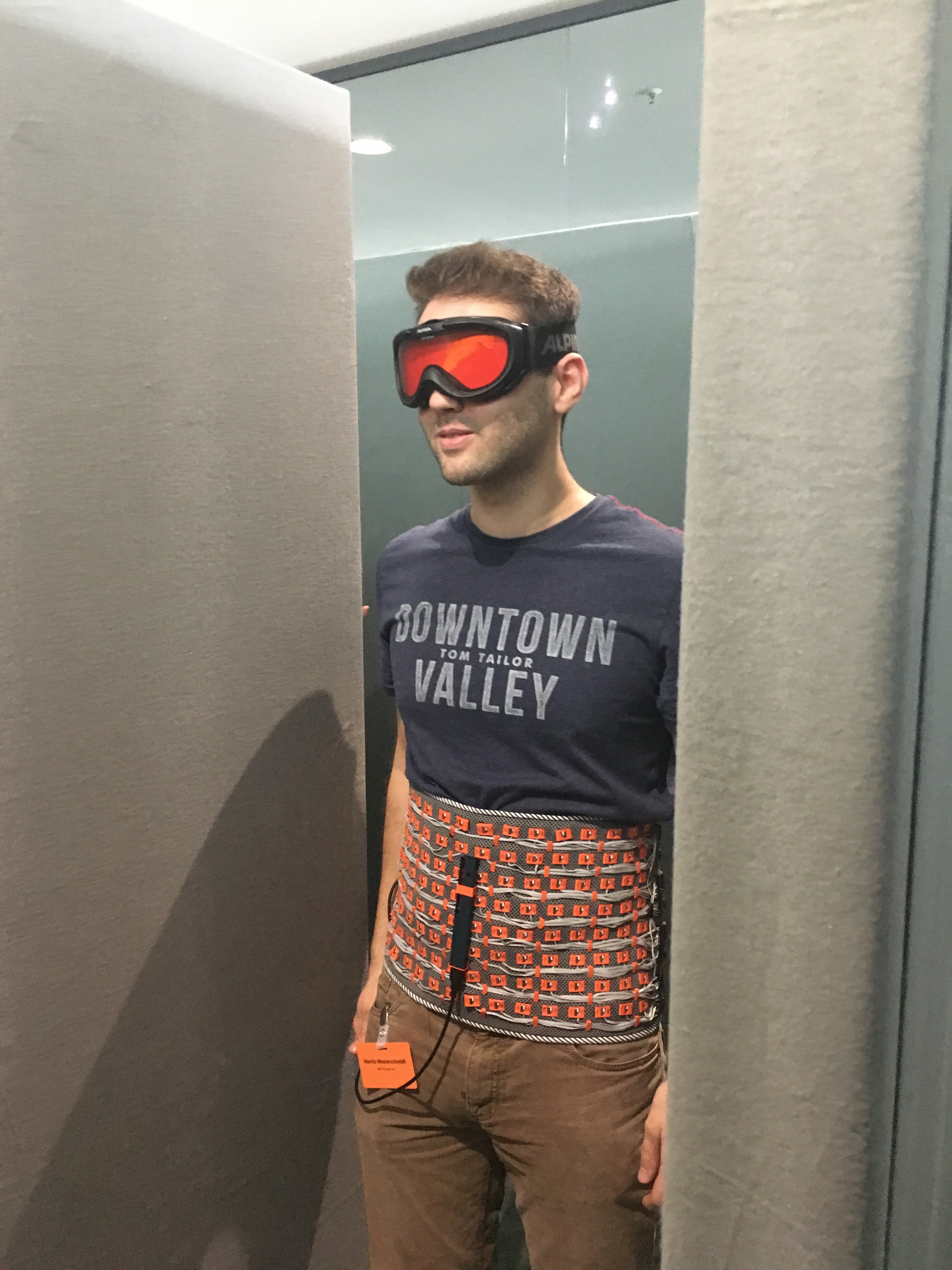 Correct and corrected - and that was embarassing because i got your name right beforehand, e.g. citing you in the text in the upcoming ISWC2107 design exhibition (http://iswc.net/iswc17/program/designexhibition.html), only excuse might be it was a last minute write down. Sorry for that. We are aware that the resultion is a bit to good -  on one hand we argue with fault tolerance if some motors break down, more importand we want to test the belly threshold on the long run (to test if we can get something like learning effects to distinguish a slightly better resolution). But most importand thing to now is improving the sensor system.

I am glad that you are making a new version of my project!!! Although in the second sentence of your description you misreferenced the maker of the Vest! "The combination of a depth camera and vibration motor arrays e.g. done by Brian Benchhoff (https://hackaday.com/2014/09/21/thp-semifinalist-a-haptic-vest-with-48-vibration-motors/) "

I, Sean Benson, made this project, "3D Haptic Vest for Visually Impaired and Gamers".  I understand the confusion because Brian Benchhoff made an article of my project for the Hackaday blog. Please update your description to the correct reference, "Sean Benson."

Keep up the great work!!! I want as many visually impaired people as possible to get their hands on this. It is just that I have WAY more important projects to work on for the benefit of humanity.

P.S. Your motors look like they are too close. The two point discrimination threshold for the skin on the torso is about 2".

How to Test the Thrust of Propellers