My first time building a FPV drone and it went well. Now actually flying the drone is a whole different beast.

One day I ended up down the YouTube rabbit hole of clicking on suggested and related videos until I arrived at one about drone racing. It was a video showing off a drone racing competition held in some warehouse at night with bright led gates that these small, agile drones would race through. I thought that was awesome and I soon ended up watching more competitions and found some people who made freestyle drone videos that I really enjoyed. I then decided that I was going to build my very own drone capable of going the crazy fast speeds achieved in those videos. I then set out to start researching about the parts required to build an FPV drone and over the course of about a week I had a list of the parts I wanted.

Here are some quick tips for when you build you first drone that I wish I knew ahead of time.

First thing I did after researching all the parts was to order them and it took me anywhere from 2-5 weeks to receive all the different parts. Here is a picture showing off most of the parts that I would use to build my drone. *Not featured in this picture is the FPV headset which if you want to utilize the FPV camera you need to buy one. 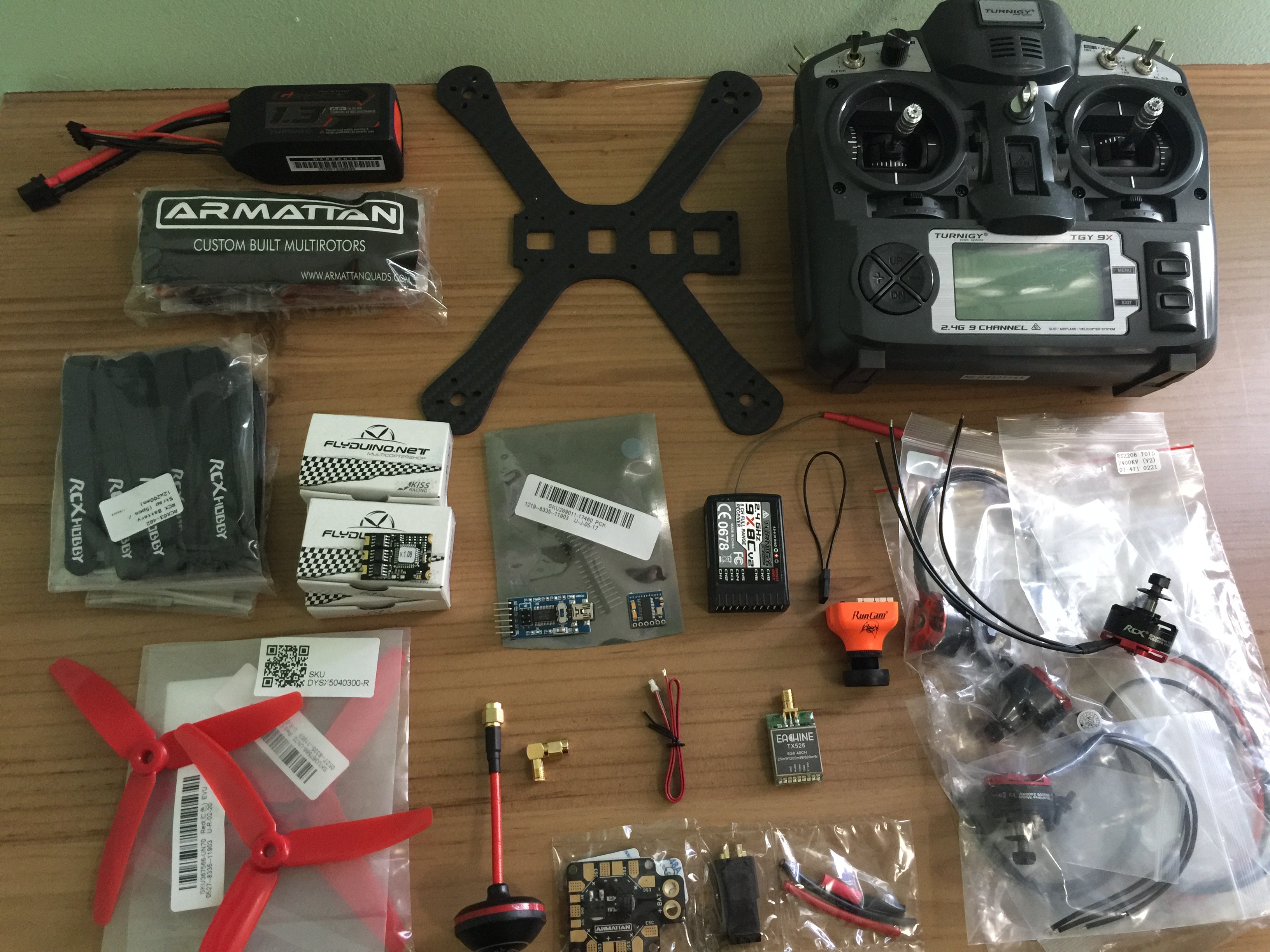 To help me understand where to solder each part and how everything was to connect together I  made this very basic wiring diagram. 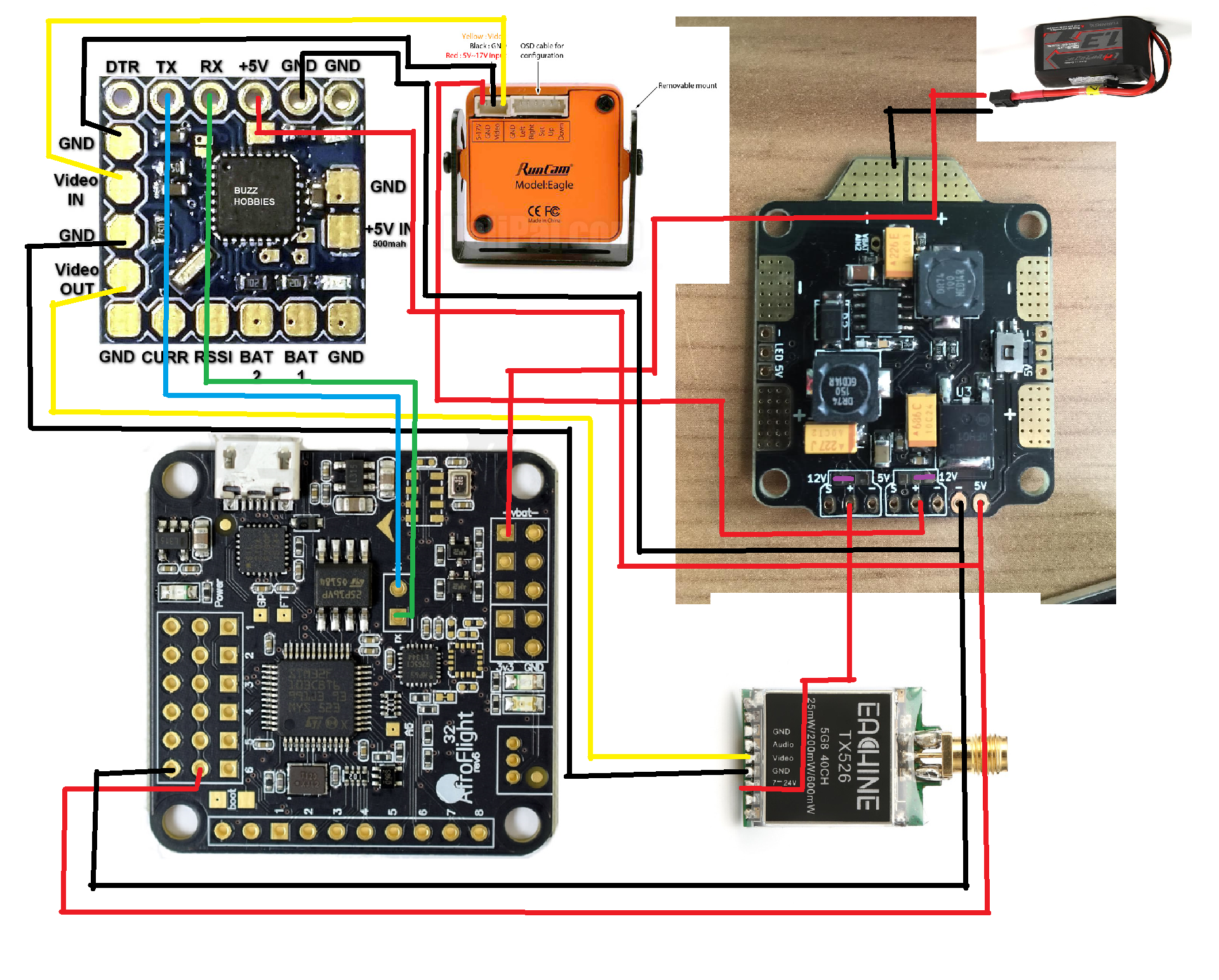 Then I went ahead and attached the motors to the frame and soldered them to the ESC's and PDB. 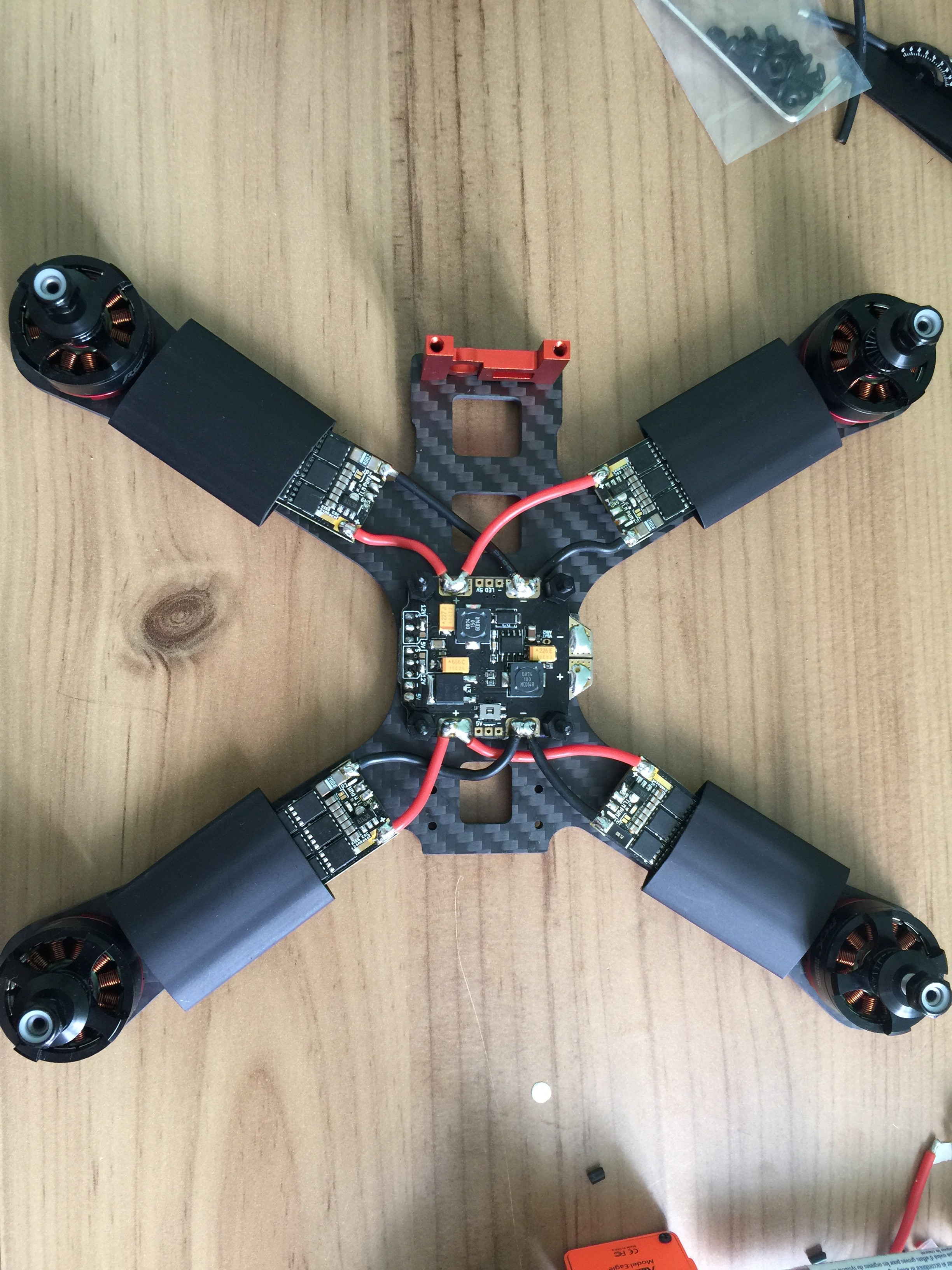 In this picture you can see the minimosd being connected to the Runcam and video transmitter. 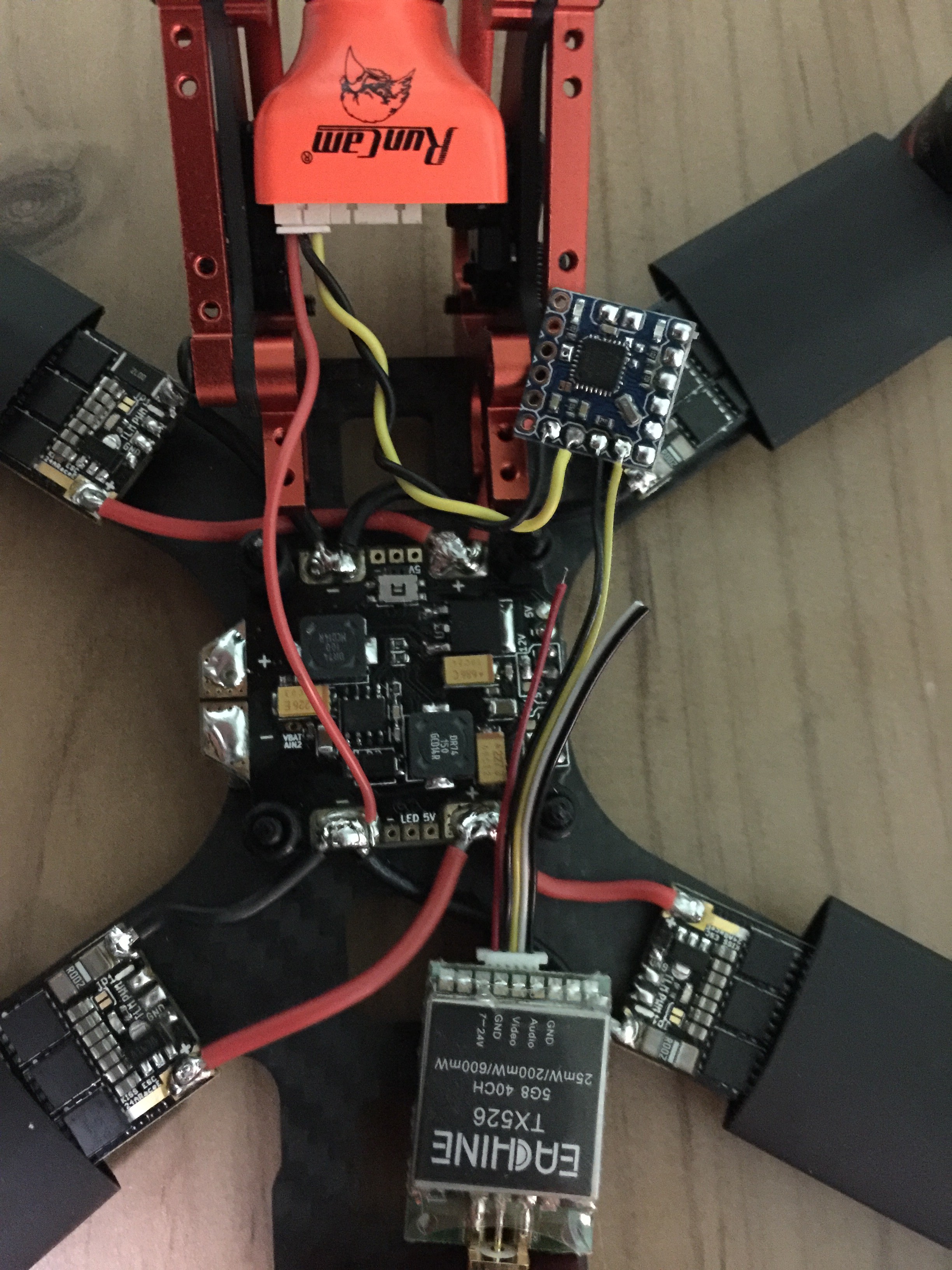 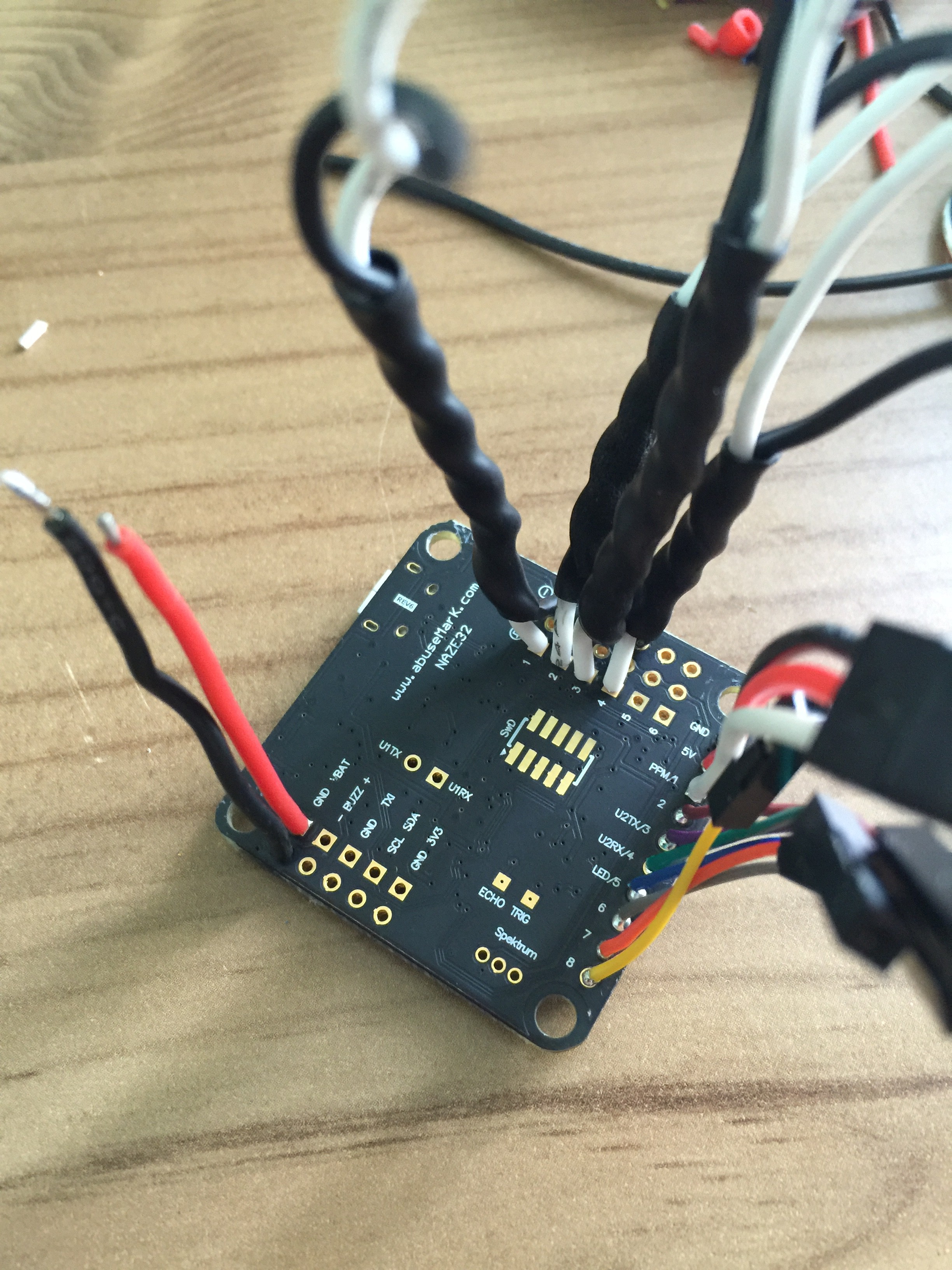 The next couple of pictures details how cramped this build will turn out and I end up not being able to mount the flight controller directly to the frame using the mounting holes. 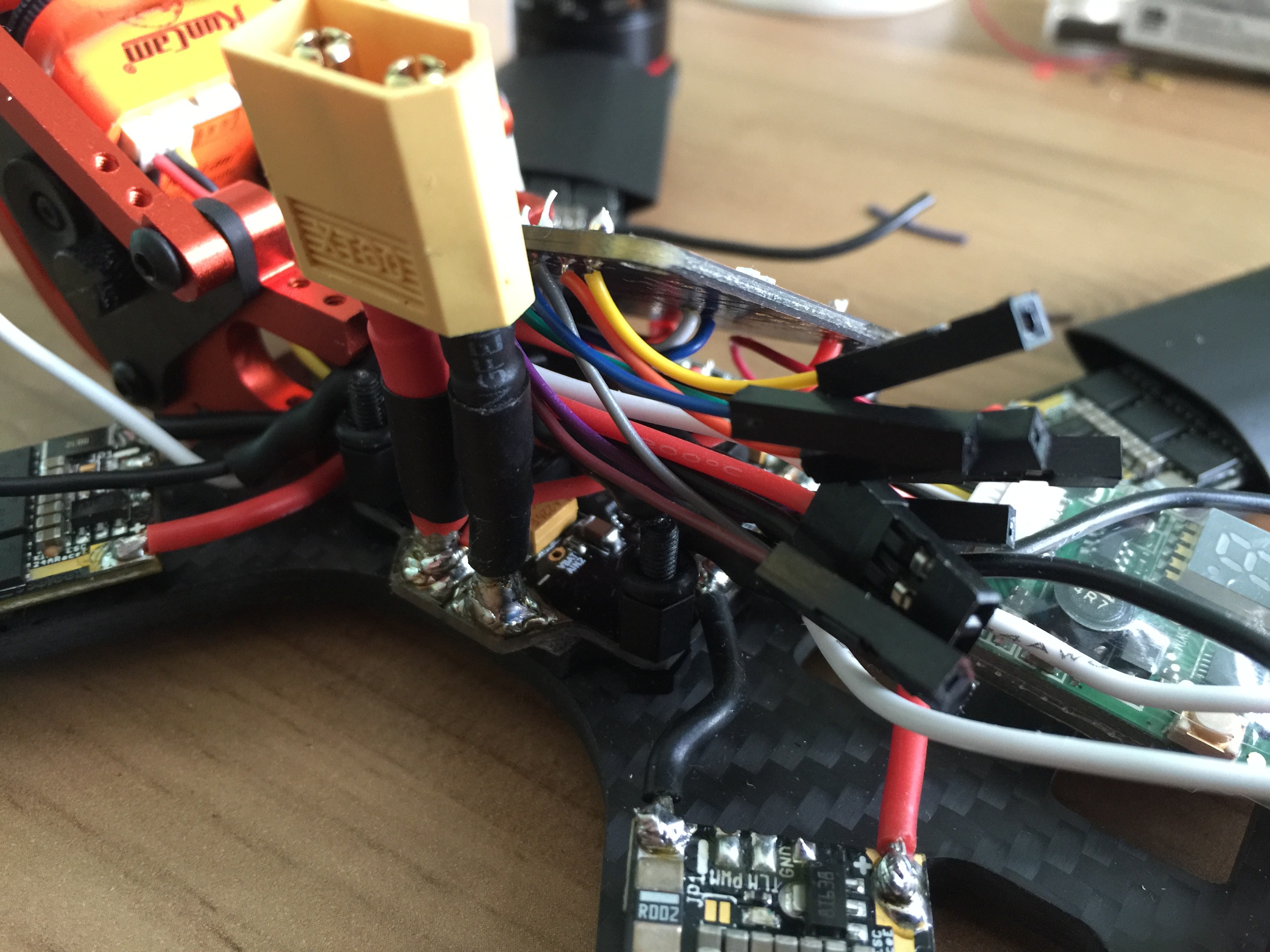 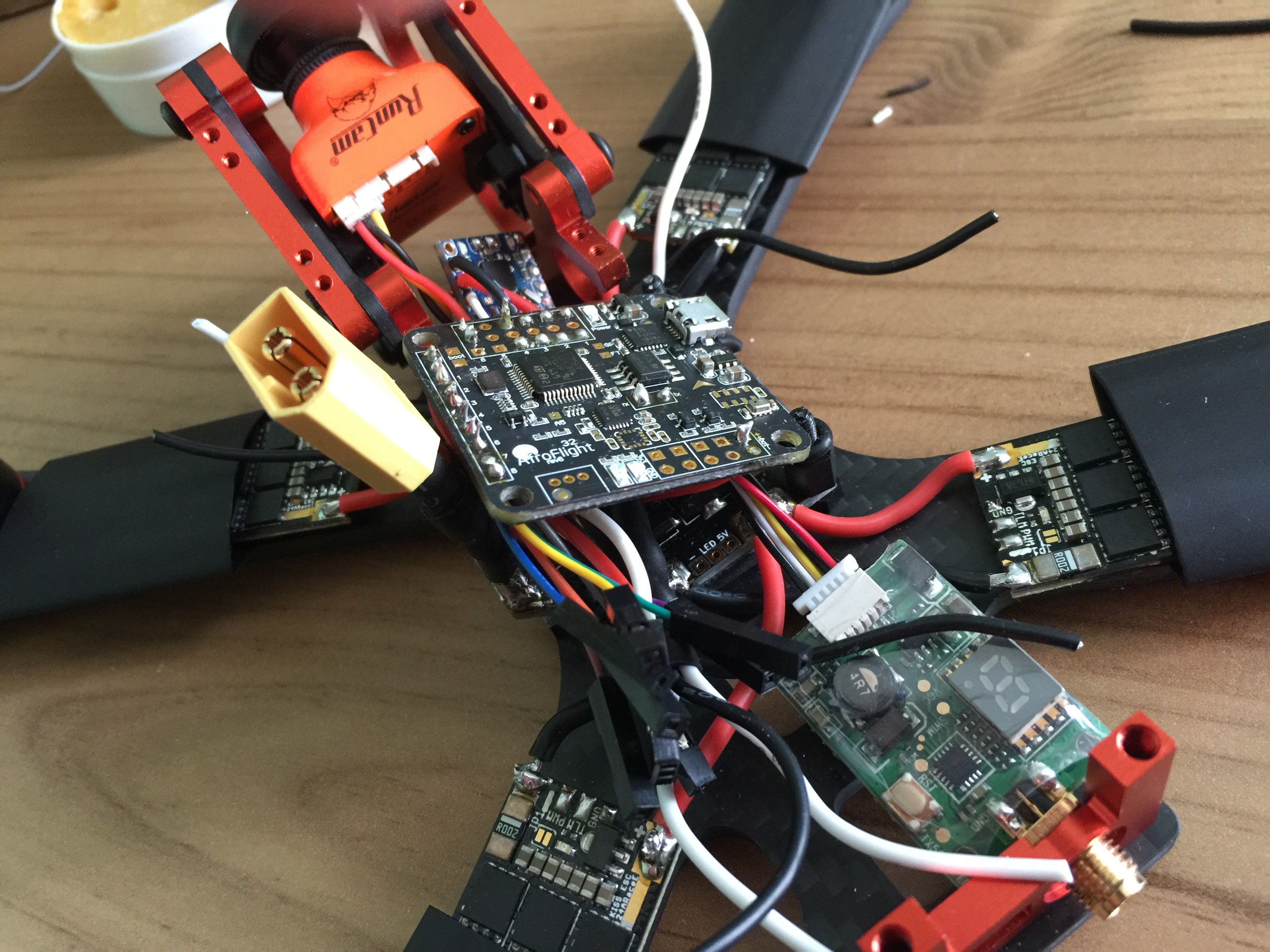 There was still one one major part which I needed to add and that was the radio receiver. The problem I faced was that the radio receiver was way too bulky with its plastic and shell and would not fit inside the frame along with all the other components. I overcame that issue by removing all the screws keeping the plastic shell in place and installed bare. 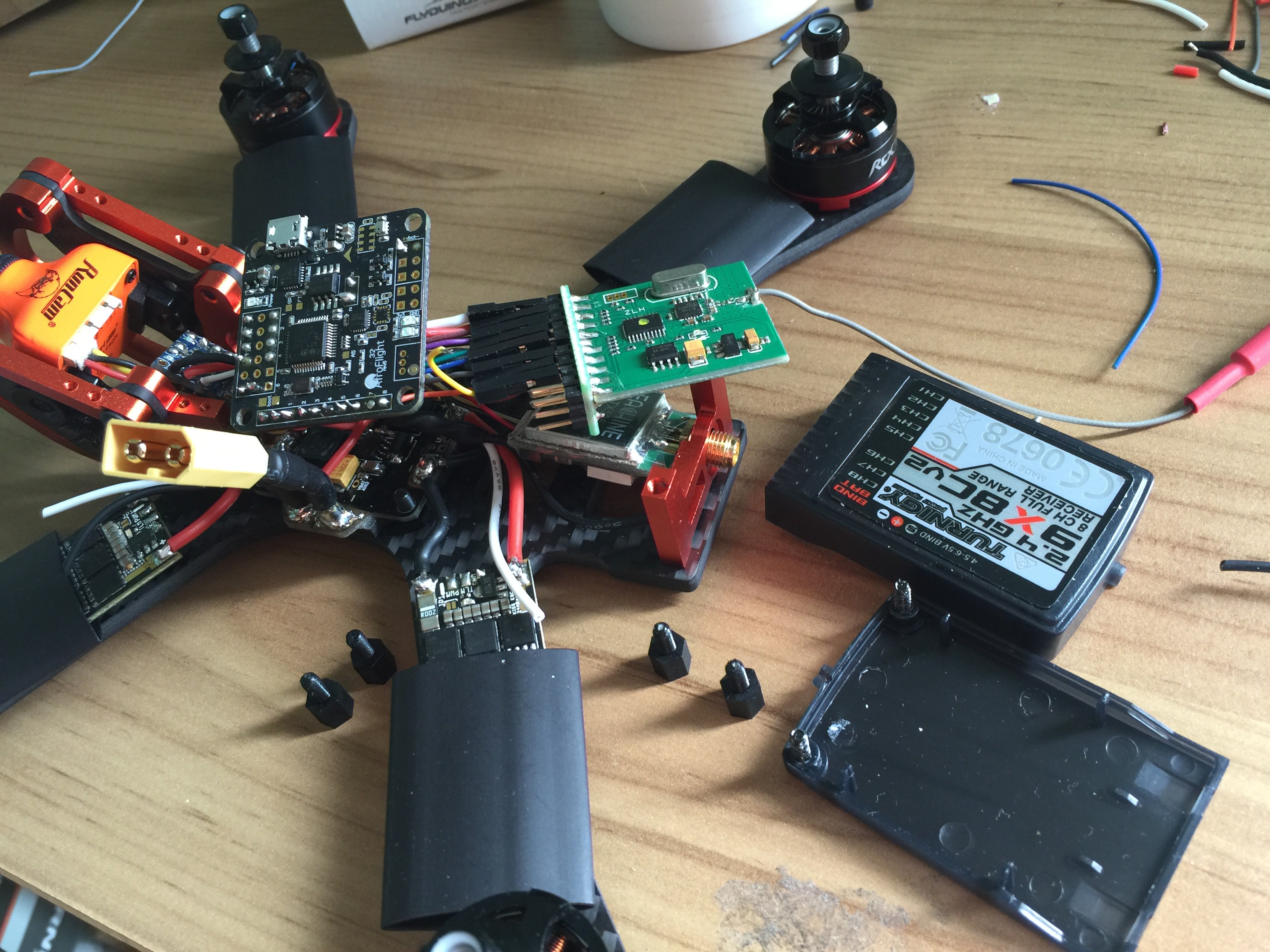 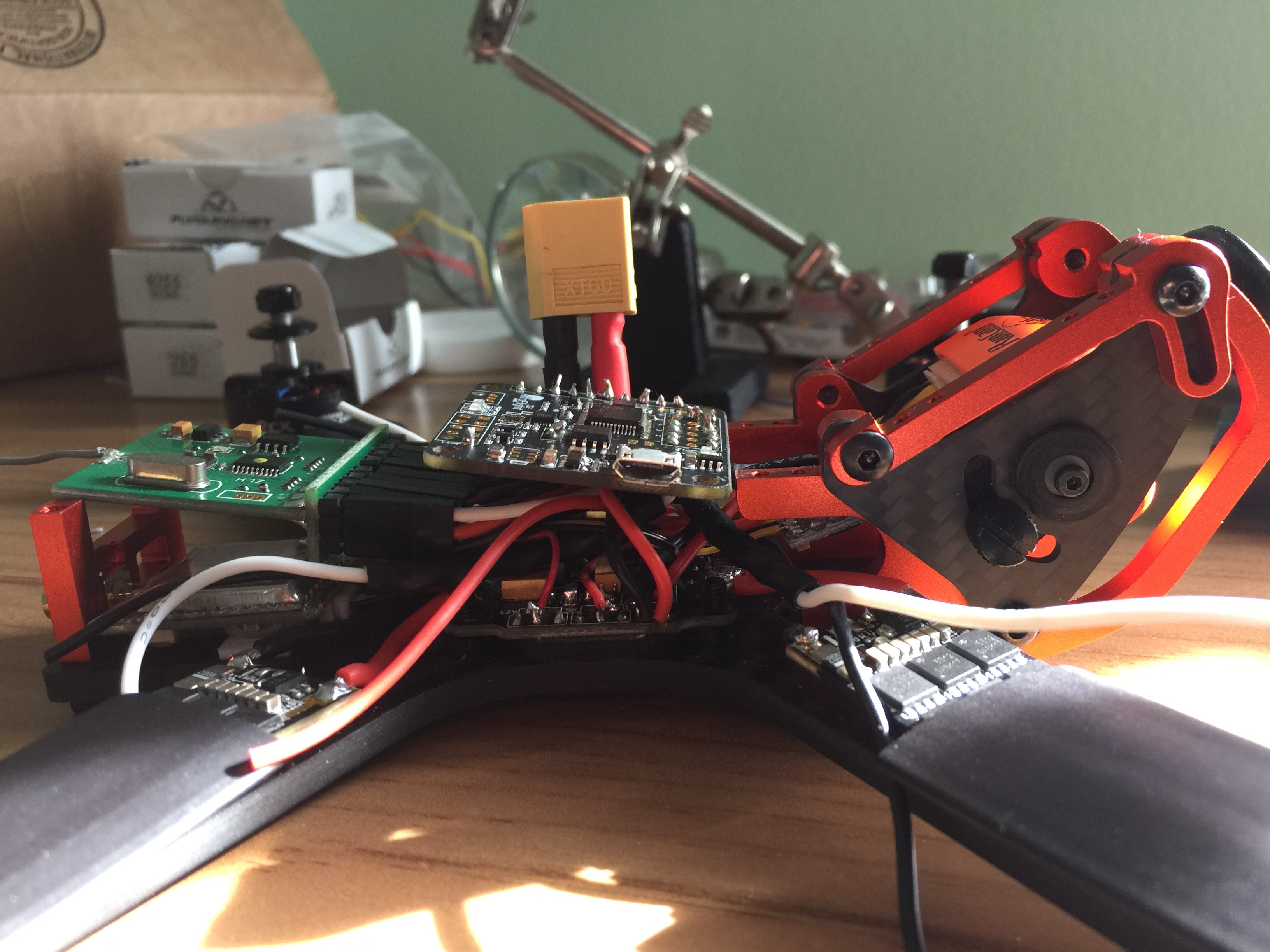 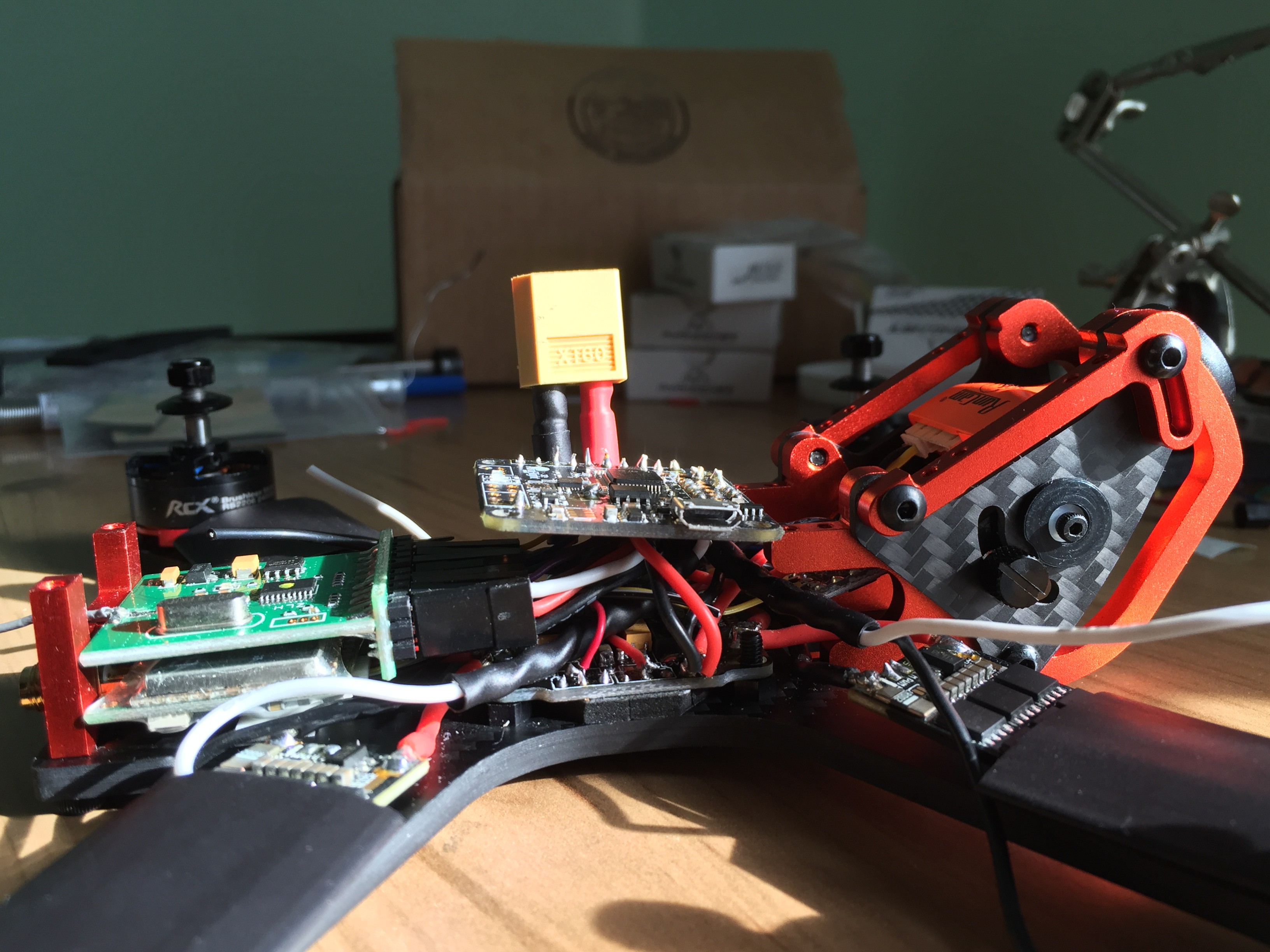 I eventually got everything to fit inside by putting double sided tape on top of the flight controller and sticking it to the top of the frame. The only thing is that the gyroscope attached to the flight controller might give measurements that include a lot of noise due to the vibrations from the motors. This can cause issues during stable level flight and although filtering at the software level can help you should really try to reduce vibrations as much as possible. So the best way to mount the flight controller would be to have it isolated from the rest of the system via soft mounting it to the frame using the 4 mounting holes. My issue was that since there is not enough space to soft mount it I had to mount it to the top of the frame with tape and I was worried that would cause issue with the gyroscope. To try and ease that worry I soft mounted all the motors using motor pads and used soft o-rings between the screws and frames to reduce vibrations. On top of that I...