I'm not working on RaspiDrums anymore, please check out my new project eXaDrums, it's much better!

Electronic drums usually use piezoelectric sensors as triggers.
Although they are cheap, they require quite a bit of signal conditioning.
I decided to spend more money on sensors that don't require any additional components.
After spending some time looking for the right sensors, I found the perfect candidate: an accelerometer! I was quite surprised to see that the acceleration of a drum head can be greater than 200g! (according to Wikipedia that's more than a Sprint missile -- see "G-force" page).

I decided to use the ADXL377 3-axis accelerometer, because they have 1kHz low-pass filters at each output, the signal is thus very clean, and it always stays between 0 and 3.3V.

As I want the drum kit to be as close as possible to real electronic drums, I use a Raspberry Pi (originally B/B+, and now 2B).

I'm not working on RaspiDrums anymore, please check out my new project eXaDrums, it's much better!

As it was mentioned on my website in my previous article, using accelerometers as drum triggers is deadly easy. So why not pushing it further, and try to develop a full drum kit? A few months have passed since I first had the idea of turning my Raspberry Pi into a drum kit, and because I wanted to do something great, I had to learn how to use C++11. That was really helpful, and I think that the project wouldn't be that good if I had used C. In that project, the software part is clearly the heart of the drum module. It's ensuring the communication between an ADC, connected to an accelerometer, and the Raspberry Pi. Then, the data is processed and sent to the soundcard. It sounds simple, and that's the whole point! It is simple. And it's also entirely reconfigurable, which means that you can change the drums sounds, and all sort of parameters to personalise your drum kit. But before I go into more details, I will describe you the hardware, and show you what you need to make your own RaspiDrums.

Presentation of the hardware

The following figure shows how the thing works. 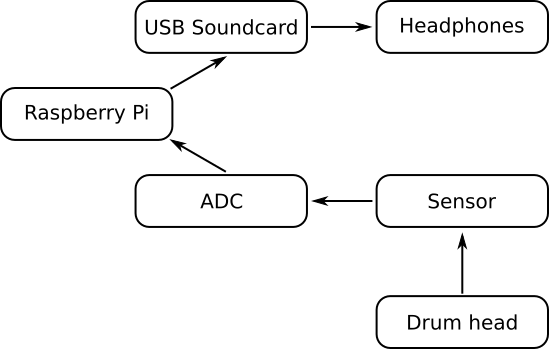 As you hit the drums, an analogue accelerometer transforms the vibrations of the drum head into an electric signal. This signal is then converted by the ADC in a sequence of bits that depends of the acceleration measured by the accelerometer. The Raspberry Pi reads those bits, and converts them into a value that is proportional to the drum head's acceleration. Thus, the stronger you hit the drum, the higher this number is. This value is used to set the volume of the drum sound, which is sent to the soundcard, and ultimately to your headphones.

So, according to what we just said, here is what you need:

Attention: the choice of the accelerometer is important, please read next section to understand why! The external soundcard isn't really necessary, but the audio output of the raspi is really bad, so that's up to you. Anyway, if you choose an external soundcard, don't forget to make sure that it is compatible with your Raspberry Pi.

As you should know if you read my previous project, the Rhythm coach, accelerometers have a lot of advantages to be used as drum triggers. The most important one is that they don't need any signal conditioning, the output is always very well controlled. Another advantage is that they often come soldered to a breakout board, which makes things a lot easier. Since the Raspberry Pi has only one Spi bus, I decided to use ananalogue accelerometer connected to an analogue to digital converter(ADC). The MCP3204 that I used has 4 inputs, so we can connect up to four drums to the Pi. It is very important to make sure that the accelerometer can take a really high acceleration, as the drummer can reach ±200g very easily.

Whether you want to use an external soundcard or not is up to you. It will definitely add some latency, but the integrated soundcard of the raspberry pi is really, really bad... That's unfortunate, but at least, it has a soundcard. I use an Aureon Dual Usb from Terratec, which is compatible with the Pi and has a good audio quality. Further information will be given later, especially about the alsa configuration.

Here we are, if you've got all the components, you can now start to wire your RaspiDrums. The only tricky part is to wire the ADC to the Pi, so if you need some help, feel free to use the following...

Ahh, so this is what you are doing.  Very interesting idea, I had not thought to use an accelerometer as a drum sensor.  That will definitely get rid of most of the hardware I have designed for piezo conditioning, and probably give a much larger dynamic range that I am getting with piezos.

I wonder what the upper limit of the number of drums that you can support is?  I suppose that would depend on the accelerometer + interface... if you are using an external ADC like you show above, you could use multiple ADCs with 4 channels each for more drums (you just need to dedicate a pin for CS on each SPI interface).  I2C accelerometers would be easier for low numbers, but would probably be difficult on more than 8 drums (most devices that I see don't give you more than 3 address bits, if that).  Plus I2C is much slower than SPI.

It's hard to tell from the video, but I do not see any noticeable latency.

Anyway, very nice work, I will definitely be watching your progress.

Cheers mate!
Yes, accelerometers are expensive, but the output is quite clean.
I know for sure that I can have at least 4 drums. That's because the ADC
is a MCP3204, it has 4 outputs, and I can read them one after another.
It might be possible to get 8 drums with the MCP3208. If you use the CS
pin, you can have even more.
I haven't really tried I2C, but I think you're right, it's probably too slow...

It's really to say if there's some latency by just looking at the video. I used a pad from my electronic drums, and recorded the output of both the piezo and the soundcard of the raspi. The latency varies between 20 and 25 ms, worst case is 30 ms... It seems to be because of alsa(?), as the raspi 2B isn't any faster than the B+... That's why I asked you the question about the latency of your drum kit with the raspi. But I believe that, if you use a codec, it's a lot faster. Again, maybe is misconfigured alsa...

I'll be watching you progress too! I'm looking forward to seeing your results.

I'm hoping that the PCBs arrive next week (I was hoping that they would arrive this week, but that has not happened).  Once I get it all together I will try a similar latency test to see what sort of latency I am getting.  I'll let you know.  :-)

Hope you get your PCBs next week.
Hopefully the latency will be very low ;-)
Cheers.

A simply front end to use a networked scanner on a Raspberry Pi from an OSX machine.
Project Owner Contributor

Any manifestation of a meeting - in the schools or in the streets - is going to need clear communication. Anyfesto helps that happen.
Project Owner Contributor