In my previous column, we discussed how everything physical in the universe is made from atoms, which are themselves composed from electrons, protons, and neutrons. Each electron has a single negative (-ve) charge; each proton has a single positive (+ve) charge; and the neutrons are neutral. We also noted that the number of protons determines the type of the atom, and -- by default -- every proton has an associated electron, which therefore leaves each atom electrically neutral.

What we didn’t say is that it's possible to drag one or more electrons (with their associated negative charges) kicking and screaming away from their parent atom, which leaves the remaining atom holding a net positive charge. We call the result a positive ion.

Similarly, it's possible to coerce an atom to accept more electrons than it really wants. This means the atom ends up with a net negative charge, so we call the result a negative ion.

The reason I’m waffling on about this here is that we can create a container comprising two chambers -- one filled with positive ions and the other filled with negative ions -- and call it a battery. 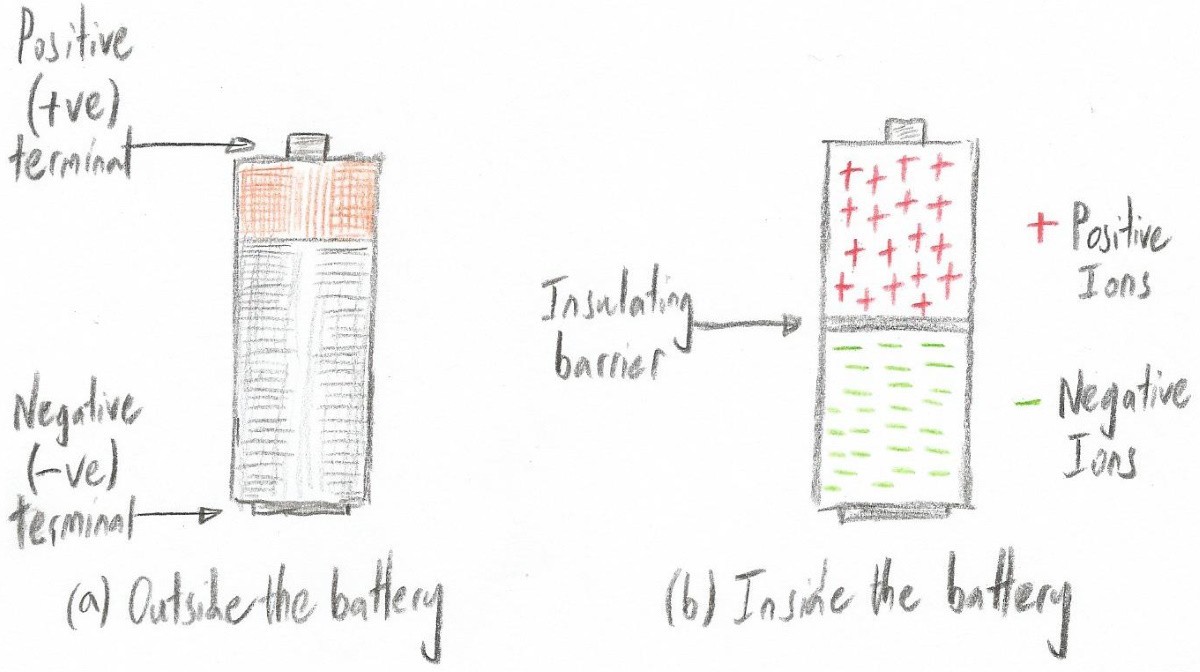 Do you recall in Part 2 where we introduced the concepts of voltage (V), current (I), and resistance(R)? Well, we’re going to jump ahead of ourselves a little here, because we’re going to create a simple circuit that involves our battery, a couple of pieces of copper wire, and a component called a resistor (we’ll circle back to explain any missing information later). 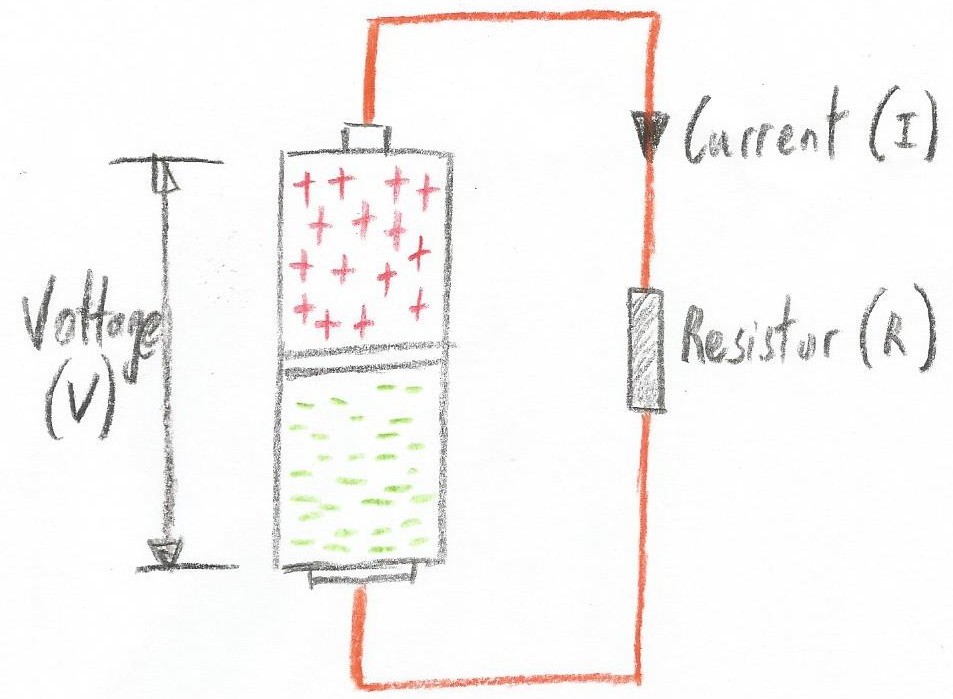 Electricity involves herds of electrons migrating from one place to another (electronics is the art and science of controlling these herds: starting them, stopping them, deciding where they may roam, and determining the activities they are going to perform whilst on their way).

Different mixtures of elements can be combined to form an almost infinite number of materials. The atoms composing these materials use their electrons to form bonds that hold everything together. We can think of this as being like a large crowd of people all holding hands.

In some materials, like the barrier used to separate the two chambers inside our battery, the electrons used to form the bonds that hold everything together are tightly bound to their respective atoms. This prevents them from moving around, which therefore means these materials don’t conduct electricity. We use the term insulator to describe materials of this ilk.

At the other end of the spectrum we have metals like copper, in which the bonds holding the atoms together are relatively weak. This means the bonding electrons can easily migrate from atom to atom. In turn, this means that these materials can be used to convey electrons from one place to another, which is why we use the term conductor to describe these types of materials.

One other thing we noted in Part 3 is that protons are relatively large and ponderous, while electrons are small and light on their metaphorical feet. As a result, in the case of our simple circuit, the additional electrons associated with the negative ions in the chamber connected to the battery's negative terminal do their best to race down the wire to make friends with the positive ions in the chamber connected to the battery's positive terminal. This movement of electric charges is what we call the current.

Meanwhile, our resistor does its best to slow things down to a manageable level (we’ll look at what this resistor is doing and why it’s doing it in our next column).

To be honest, I'm almost embarrassed to tell you this, but here's the thing... humans discovered electricity long before we discovered the existence of things like atoms and protons and electrons and suchlike. (Actually, it's probably more correct to say that electricity, in the form of lightning, discovered us.) For a variety of reasons, some theological, it was originally believed that electricity flowed from positive to negative. By the time we'd discovered the awful truth, all of our textbooks, equations, and formulas had the arrows and signs pointing the wrong way.

As you may imagine, this inconsistency can, and does, cause endless problems. Eventually, however, we (i.e., engineers and scientists) all took a deep breath and decided not to tell anyone that we'd messed up on the basis that most people (i.e., non-engineers and non-scientists) don’t have a clue what's going on in the world of science and technology anyway. As part of this, we decided to leave the arrows indicating current in our diagrams pointing from positive to negative and call this conventional current, all while really knowing that actual current involves electrons migrating from negative to positive (you either have to laugh... or cry).

Now you are part of the inner circle (at some stage I will teach you the secret handshake) and you are on your way to discover secrets that will make you squeal in delight, but we will leave all that to future columns. In the meantime, as always, I welcome your comments, questions, and suggestions.

Might want to point out that in transistors etc. that positive entities are current carriers as well as negative electrons then + to - current arrows are actually correct. Thus "conventional" current flow doesn't seem to be so hokey.

Yes, the direction of current flow always confused me way back when but like yourself, I just Go With The Flow....Sorry, had to say that :-)

These are the jokes "The Muppet Show" refused LOL

Other than the Swedish Chef, my favorite Muppet's are Dr. Bunsen Honeydew and Beaker. Talk about science going all inside out XD

Do you remember Beaker's classic "Ode to Joy" sketch? https://youtu.be/VnT7pT6zCcA

Oh how that brings back memories. There are times I feel like a real life Beaker......Minus the flames ;-)

It's the flames that make it fun -- ask the guy in the Darth Vader mask wearing a kilt, riding a unicycle, and playing flaming bagpipes (and it's not often to expect to hear yourself say that): https://youtu.be/cnVjkE87FDY

It's just one more service I offer :-)

Just discovered this series and i'm loving it

Hi Glenford -- thanks so much for your kind words. I remember how confused I was when I was starting out, and I know how tricky everything can be when people don't have a strong foundation, so I'm really trying to build up from the absolute basics. This weekend I created the images for Part 7 which I will post at the end of this week -- I think you're really going to like Part 7 :-)

Thanks Jozero -- I'm happy to know that people are reading this -- although we're taking things slow, we'll start doing some interesting "hands on" stuff real soon.