I tested the Google Cardboard headset. Unfortunately, the screen widths for my iPod and Android phone were too small to use with the Google goggles. So I decided to build my own stereograph viewer with parts from my Lego optics lab.

For the 2016 Hackaday Prize, I've decided to incorporate this project into a much larger set of projects that altogether I call my Lego Optics Lab. The following are all the various parts an projects that are included:

This project (the one you're looking at right now), of course. 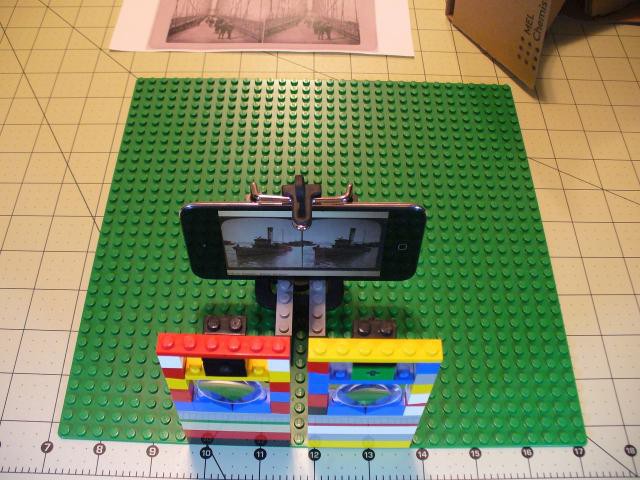 The build was very simple (see picture above). I used the following parts from my Lego optics lab:

It turns out that it is so easy to build a stereograph viewer that I really didn’t need the lens holders and could use a pair of dollar store reading glasses. The cardboard divider is optional if you have trouble relaxing your eyes like you would to view those 3D “Magic Eye” images. Otherwise the cardboard divider isn’t necessary.

Creating a stereograph is pretty easy too. I used an app from Google Play called 3DSteroid. The app lets you make a stereograph by taking two pictures of the same object. You snap the first picture, then move the camera one or two inches to the right, and snap a second picture of the same object. The app then stitches the left and right images together in a single image.

Thanks, Erland, for liking my project!

Thanks, Joerg, Ivan, and Jaromir, for liking my project!

The 2015 Hackaday Prize
To continue the Lego Optics Lab project I’ll demonstrate how I built a lens holder for the several small lenses from the broken projector.
Project Owner Contributor