The straightforward method of providing telepresence from an UAV is to mount a pair of cameras to a steerable gimbal, control the gimbal to match the HMD orientation and transmit the video stream pair to the HMD views. This approach, while simple in principle, has some major practical issues.
The most obvious drawback is the unacceptable lag between head and camera movement and the resulting overwhelming sway in the viewed images. This originates from the fact that the head movement has first to be measured (~ 1 ms), transmitted to the UAV (if embedded to a typical rc transmitter stream ~ 20 ms), the servos have to fully respond (highly dependent, but 100 ms is optimistic), the cameras have to acquire the image and send it to the ground station (~ 20 ms) and finally, in case of Oculus Rift, a computer has to capture the image and process and display it on the HMD (depending on mutual phase ~ 30 ms). Instead of an acceptable 20 ms the lag is ten times that. 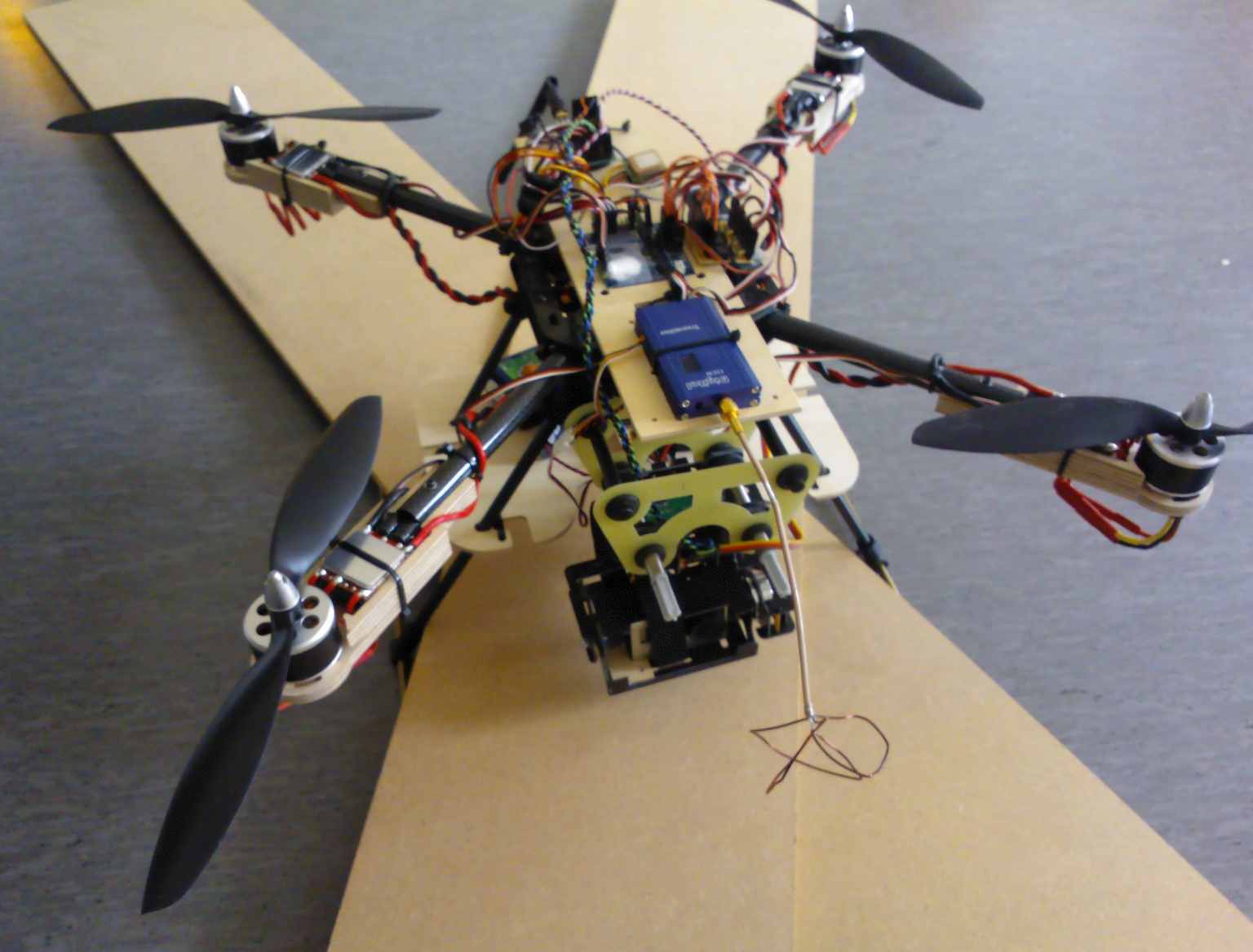 The video link was a 1 W 2.4 GHz Tx/Rx pair from HK, the operation of which improved significantly after replacing the original whip antennas with very rough handmade clover leaf ones. The tutorial here was crucially important. My co-worker even measured them and found them very, very good (she said, and she's a pro). At the receiving end there was an Targa USB video grabber (from local Lidl, EUR 20) connected to a...

This is an excellent idea. I just bought a Phantom 2 with a GoPro Hero 4 black. I've already made some sweet FPV videos with it:

I'm using the GoPro in "Narrow" view here, then correcting the FOV in Final Cut Pro X using the Alex4d plugin with the 90 degree setting to turn the GoPro's fisheye lens into a nice clean rectilinear lens.

I prefer "narrow" mode for FPV because it makes the GoPro super wide lens more like a telephoto lens. It's easier to see objects I'm approaching and avoid collisions.

Essentially what you've done is move "Narrow" mode from the camera into the laptop on the other end of the link. This allows you to look around inside the whole super wide view using head tracking technology. That's a great idea! However, how do you transmit a full HD signal in real time with minimal lag via radio? I know DJI's Lightbridge is capable of this, but even Lightbridge seems to have a fairly high amount of lag.

I became interested in this because I am considering buying a pair of FatShark Dominator HDs, but then I thought, "man, an Oculus Rift headset would be so much cooler." I'm a software engineer by trade, so the challenge intrigues me.

Hi, (and sorry for the rest of the commenters, I've been pathologically busy, but try to catch up soon), nice that you like it. Unfortunately, I have no method of transmitting the HD image, but only send the video out (from the 10-pin usb port) with a normal video transmitter. Full-HD would of course be much nicer (especially when you consider the stretching that happens for Oculus), but not with the current budget...

Harald Kubota wrote 10/05/2014 at 09:14 • point
This is a great idea to get rid of the gimbal and it's technically rather easy ("just" software) as long as you don't allow people to look more than 90 degrees off-center. I think it would be a nice challenge to move the camera lazily: As long as the absolute camera position is known and the relative view of the viewer, the resulting view is just a rotation of the view.

So the question is: Where to start? Is there a github source repository? If not, why not? :-)

For the sake of anybody with FPV and a Rift: this would be awesome to get running!

The original idea was indeed to move the camera lazily, as you suggest, but the gimbal did not provide the direction information. Yes I know, that too can and should be programmed with own firmware anyway. Hopefully later.

There is no github for two reasons. First, never done that before so it does not come naturally, and second, the software is not in clean enough shape to show publicly. That said, if anyone is so interested that is willing to suffer the prototype/hack/spaghetti code, I'm willing to send a copy for personal use.

I have no data on the latency of current commercial analog systems (the ones I have seen have had hundreds of milliseconds to finish the movement), but the latency in our system in respect to user head movements is the standard latency of any Oculus software. On the other hand, in respect to real world events at the UAV end it is 2 - 3 frame times (camera, grabber, laptop). I would estimate that to be 50 - 100 ms. When you clap your hands in front of the camera, there is clearly a delay, albeit a very small one. Of course, that doesn't affect the feel of immersion since you don't really know when things actually happen far away.
The software isn't anywhere near clean enough to be published, but I'm glad to mail you or anyone interested a copy for reference. Basically there is a dense, constant z mesh (DirectX vertex + index buffers) with corrected texture coordinates for each warping. At least sometime in the past single texture polygons were very fast to render.

Adam Fabio wrote 09/18/2014 at 05:21 • point
This is great Gary! I'm thinking of doing something very similar, though I would like to try lower level flight. How did the overall latency compare to the common analog systems in use today?
Do you have any links to the software you created to convert from a warped fisheye GoPro view to a standard image, and then to an image suitable for the oculus? I'd like to give it a try!

Official Hackaday Prize Entry
Cassapa is a system to help aiming at pool games. It uses augmented reality to help the player to adjust the cue direction.
Project Owner Contributor

FollowCam: A Webcam You Can Walk Around With