Robotics are at the leading edge of Industry 4.0, AI and the Edge revolution. Let's look at how we can create an FPGA-controlled robot arm.

Robotics are at the forefront of the Industry 4.0 and edge revolution along with artificial intelligence and machine learning.

Robotics are at the forefront of the Industry 4.0 and edge revolution along with artificial intelligence and machine learning.

As such I thought it would be fun to create a base robot arm project we can come back to and add in several features such as:

This example will use a robot arm which uses six servos under the control of a Zynq SoC. It will be controllable using either a simple software interface or using two Pmod joysticks to enable direct control.

The first thing we need to do is work out how we are going to control the Servo Position. Servos are one of the simplest motors to drive, and idea for robotics as they also hold position provided we maintain the same drive signal.

So what is the drive signal for a servo? Most Servos in the class we are using, use a 60Hz PWM waveform. In the 16.66 ms period of the 60Hz waveform, the signal will be high between 0.5 ms and 2, 5 ms. The duration of the signal will drive the servo in a range of motion between 0 and 180 degrees.

Driving a 0.5 ms pulse drives the 0 degree position while 2.5 ms will result in the 180 degrees. 90 Degrees therefore is maintained by driving the signal high for 1.5 ms.

Therefore increasing of decreasing the pulse width by 13.9 us moves the servo by 1 degree.

While we have the triple timer counters which are capable of providing the PWM signals necessary. We would also need to supply servo power at 6 volts in this application, therefore the simplest manner to make use of the Adafruit PWM Shield. This not only provides 6v power but also performs the level conversion on the PWM signal. 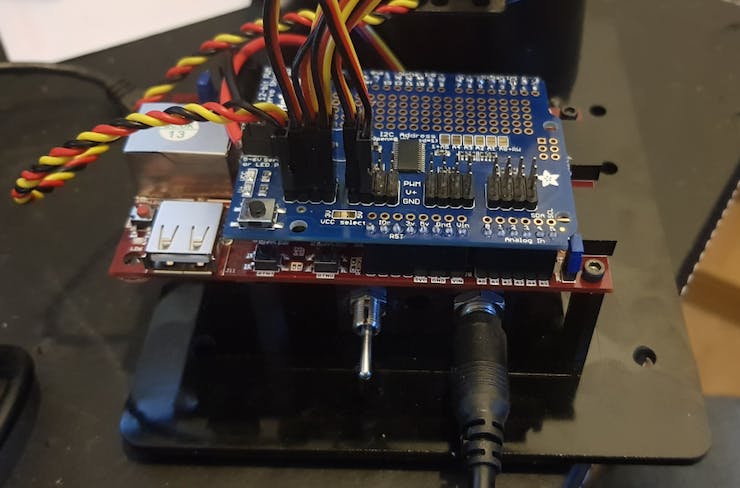 The next thing to work out is how to drive the signals, the PWM shield uses four 8-bit registers to drive each PWM signal.

As such we can always set the on time to 0 and then define the count at which we turn the signal off, to give us the width of signal required.

To be able to interface with the Pmod Joysticks and the PWM shield we need to first create a design in Vivado. This design will contain the following IP blocks 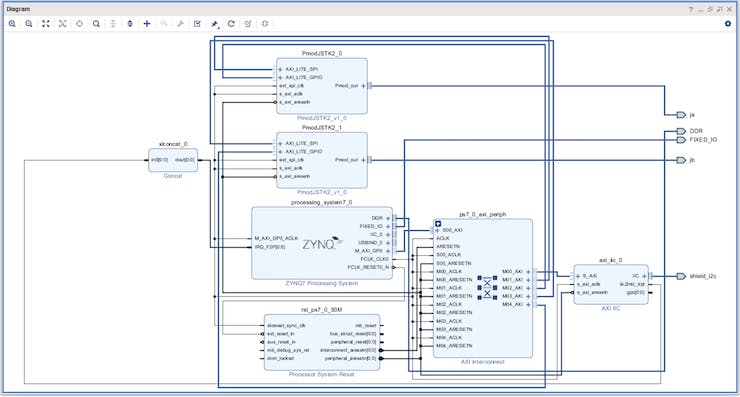 To use the Pmod IP cores we need to have the Digilent Vivado library mapped in as a IP repository. If you do not have it you can obtain the repository here, you also need the Cora board definition installed, if you are missing these you can download them here.

Once we have the block diagram complete we can build the design and export it to software.

It is in the software that we are going to be developing most of the application. As we want to use this in several modes and come back to it in the future for upgrades we need a modular approach.

As such I developed a function for each joint which can be called and used as desired. Each joint is capable of taking in a unsigned 8 bit value, this 8 bit value is then either added or subtracted from a the 90 degree (1.5 ms) pulse width to obtain the angle desired.

I did this for several reasons:

How we use the joysticks is interesting they give direct control over the arm. As such we need to ensure the movement between the joystick and arm aligns.

Of the two joysticks the first one is connected to JA and the second the JB. 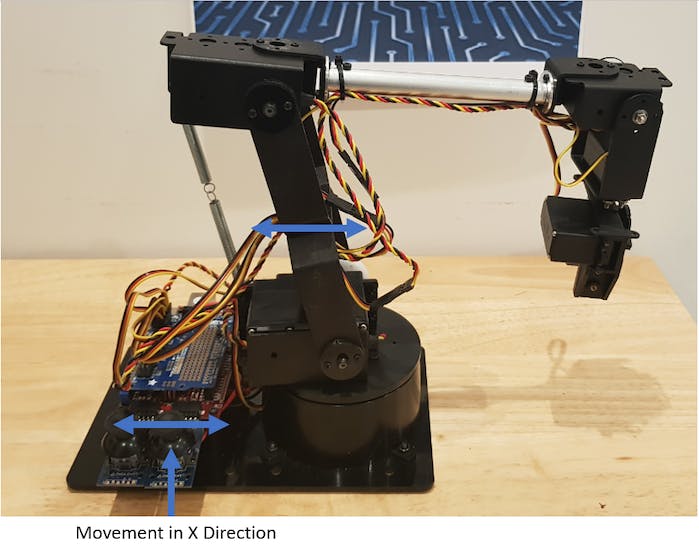 Moving JA in the X Direction...

Hackaday Prize 2019
The intent behind the Ultra Servo is to give a maker or a robotics a powerful building block.
Project Owner Contributor

Hi, I'm edog, I'm a robotic project under development. I will participate to the eurobot cup 2021 in July and will become open source
Project Owner Contributor