This is a robot arm based roughly on the ABB IRB 1400. So far my arms have been based on stepper motors, I would like to see how this one can do with hobby motors. Kinematics will be done on the PC the arm is connected to with an AVR doing the io control to the motors.

Hey! this was just the start (or close enough to) I have more arms I'v made since!
Browse around, THIS was "arm7".

Programming wise and electrically this isn't complex. A PC running linux does all the motion path control, an AVR does the hobby servo pulse control. 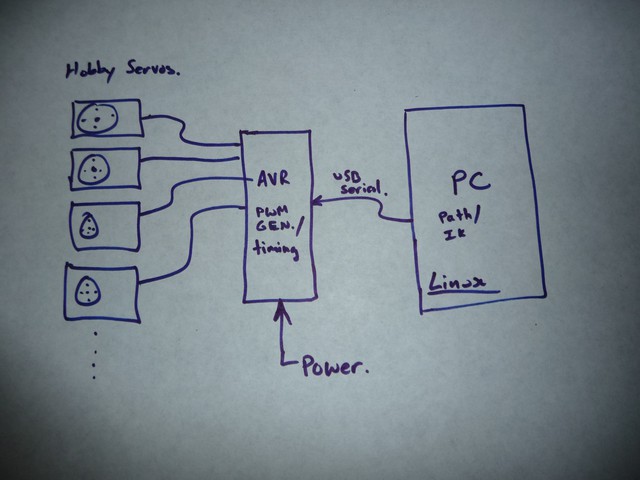 I dont really need/seek position control as the servos already take care of that, I THINK I can do force control by looking at the pulse time of the current to the servos. Longer current pulses mean they are correcting for more error, and that means their position is out. As they are proportionate, some feedback to the position command should work for force control. You just have to track yourself which way your applying the force.

skimming through, i need a arm for the science olympiad. What is the size of the base?

I would suggest what I did on the newer robot arms

If anyone has questions or would like more detail, please ask!

Garrett Herschleb wrote 09/19/2014 at 23:30 • point
For IK control, you can check out my robot controller project (which supports SSC controllers). It's posted in Hackaday and SourceForge under the title PyUltimateRobot

In this project I'll delve into the process I went to into creating my own quadrupedal robot.
Project Owner Contributor

It ran away after a heated discussion about AVR vs Pic. If you've seen it please tell it I'm so sorry, and that I miss it so much.
Project Owner Contributor

The 2018 Hackaday Prize
Boston Dynamics' robot dog, Spot Mini is unavailable at any price. A Chinese copy is $30,000. Cut 99% of the cost and build one at home.
Project Owner Contributor