projects I might steal from for my own rocket platform 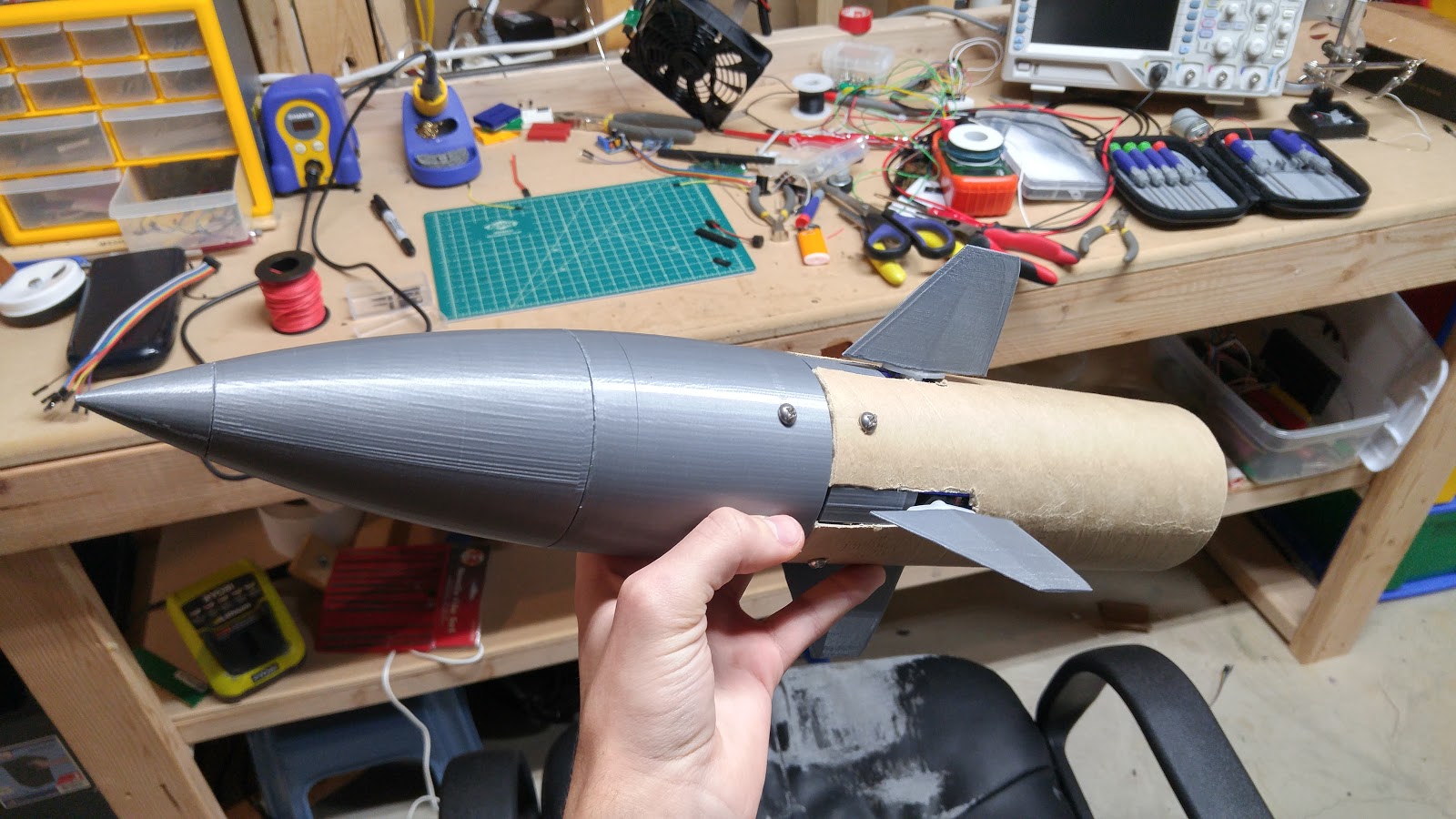 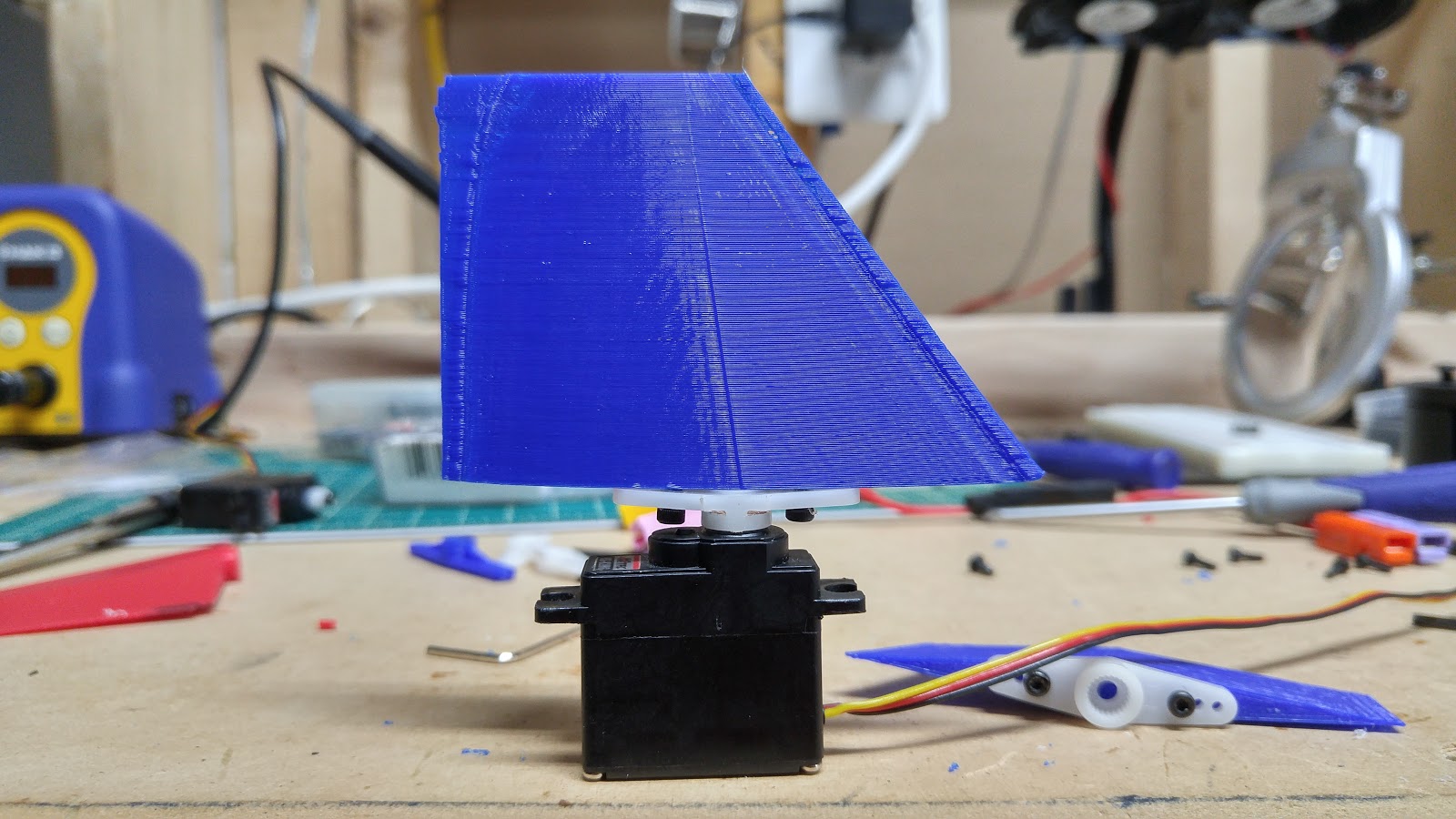 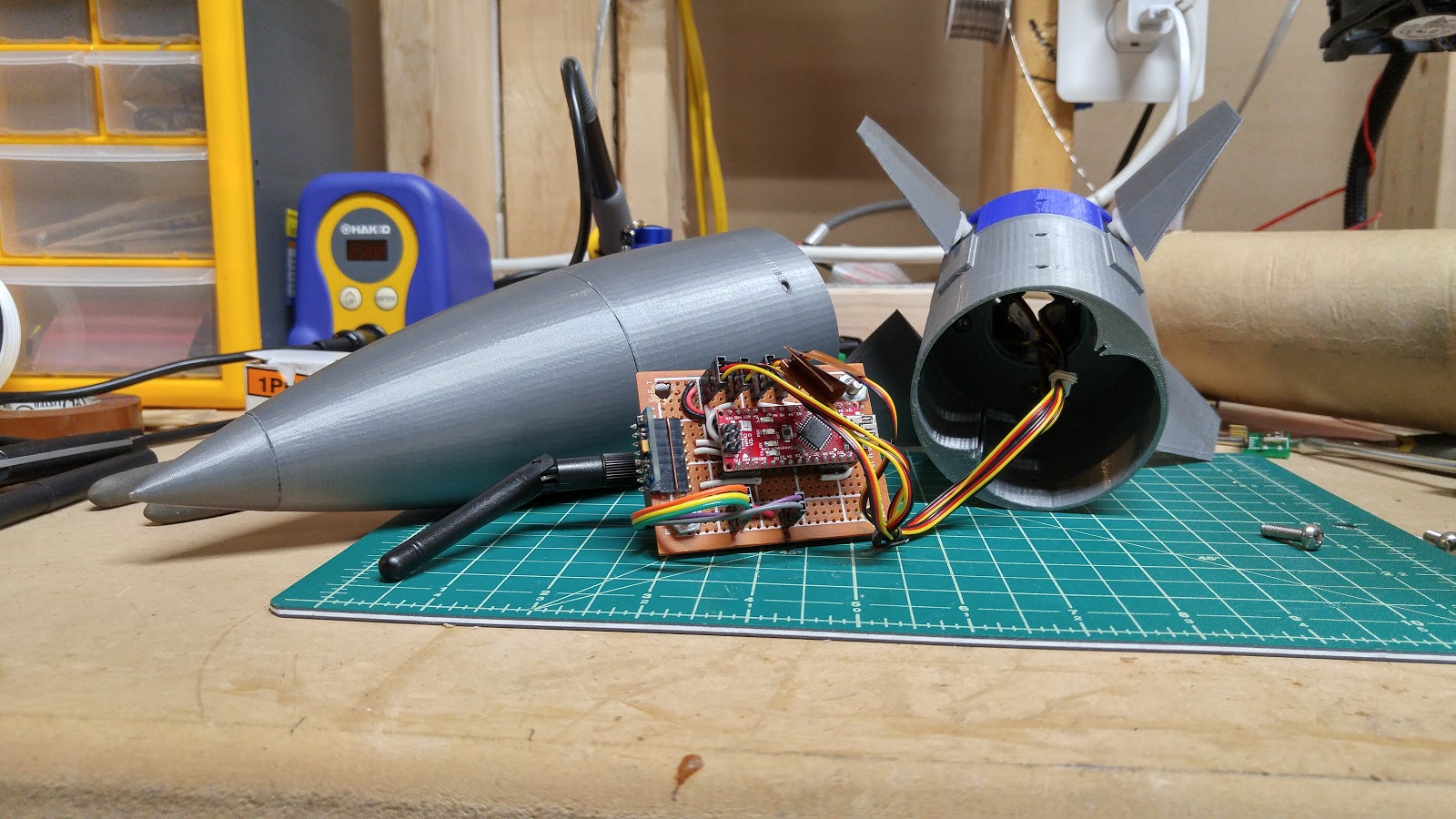 Realized to my dismay(and likely yours) that I will be unable to open source this rocket guidance project. Due to ITAR and this being classified as Defense-related I cannot export this code or hardware outside of the continental US. Link for those who wish to research more on these regulations. ITAR Regulations 121.1, Category 4, paragraph H:
(1) Flight control and guidance systems (including guidance sets) specially designed for articles enumerated in paragraph (a) of this category (MT for those articles enumerated in paragraphs (a)(1) and (a)(2) of this category);


Note to paragraph (h)(1): A guidance set integrates the process of measuring and computing a vehicle's position and velocity (i.e., navigation) with that of computing and sending commands to the vehicle's flight control systems to correct the trajectory.

As a reminder, this project MAY fall under ITAR restrictions and as I do not have the funds to file for verification, I am playing it safe by not sharing code or CAD. This system is not designed nor intended to be used as a weapon, rather just keeps a high-power sport rocket flying vertical. No I will not help you port my work to be used in mortars/missiles (yes people have seriously asked this). I am doing this project as a personal challenge to learn new skills, processes and to broaden my project scale horizons, I harbor no malicious intent. 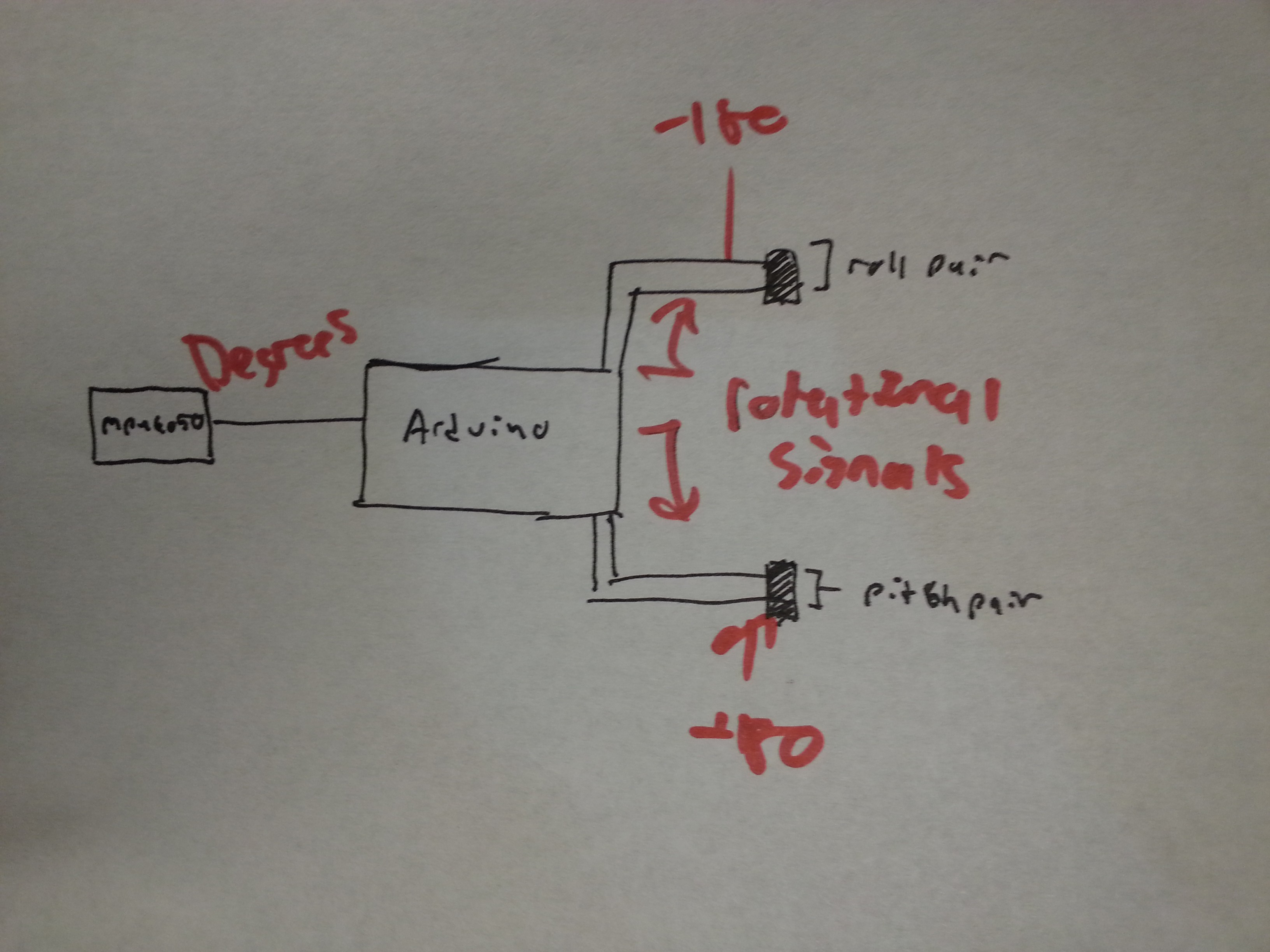 Nice work. I would love to see a test flight. Maybe you could launch it at an angle so we can see it correct?

This will not work for supersonic rockets, subsonic only.
When you go supersonic the nose canards will create shocks that interact with the tial fins in an unpredictable way, sometimes causing sign reversal .

Also google  the PSAS roll control project, then ended up with a spinning fincan so the
supersonic shocks could not sign reverse for roll control.

Congratulations on your job at NASA! Could you tell me a bit on how you got it? What kind of education do you have and how did you get your foot in the door? I would highly appreciate any input. Thanks (=

You're really overthinking the problem. The code and hardware to do this has existed for years and there has been numerous amateur rocket stabilization systems made that have already been flown. You can use any of the dime-a-dozen autopilots for RC aircraft and they will cancel out any roll for free and toss in GPS guidance. Without GPS an openpilot mini is $15 from Hobbyking. That will take care of any spin and stabilization on the cheap.

You're iterating on the fin movement when you don't have to. The actual control surface deflection you need at speed will be very tiny to correct rotation. The control surface size is far too large as well. You can get them down to about an inch long by an inch wide unless you plan on very slow speeds. If you don't have access to something that can do flight and control models it's always best to go too small and not have enough control authority to correct the spin rather than too large and catastrophically fail.  Even holding it vertical won't take much.

There are no federal laws against guidance of a rocket that is not intended as a weapon system. 14 CFR 101.23 does not list guidance as a restricted item. It also doesn't fall under 8 U.S. Code § 2332g as it does not have any method of seeking and falls under section a paragraph 2 defined as a non-weapon.

As for ITAR it doesn't meet 15 CFR 744.3 of having a range of 300km. And as for your source code and CAD somehow being considered a weapon system, it's not.

You're not even remotely near needing to worry about ITAR.

Check your state laws though as some define an amateur rocket as 'unguided' and they could charge you on a technicallity.

Wait....didn't I meet you at the NoVA Mini Maker Faire in March (I had the GoKart Tank)?  A system like this is one of my long term, pet projects (you know, the sort I have no time for).  I look forward to seeing more!

Haha yes! I am that rocket guy.

Have you considered using vectored thrust for control instead of just fins?  Anyway, I would love to help and perhaps replicate your work/contribute with design, build or whatever work.

Sent you a PM, talk on there

Hi there, our school is competing in the IREC rocket competition in New Mexico this summer. I am doing a controller for this project. I had a question about the choice of control surfaces. Canards or ailerons. From my understanding canard and fin coupling can reverse the roll. I don't know how to calculate this though.  Do you have any experience with this. I am modifying a small rocket to test next week. Canards are much easier to make but ailerons don't have the roll issue. Any advice on this?

One question:  Have you considered having your fins mount at one point, and activating their movement at another point?  I made a horrible graphic depicting what I mean, with permanent mount at the top, and swing arm mount at the bottom:

This would prevent strain on the motor (from having the fin directly mounted), and also allow you to use a step-down gear from the motor for finer control.  I'm not sure how fine-tuned the servos you're using will be, but having a step down could dramatically increase precision (and prevent over-correction).  You'd need to implement a worm gear or some other method of transferring torque, and this would require a slot along the body of the tube, but perhaps the advantages would be worth it.

This is awesome.  I've been dreaming of making a high elevation, self-guided rocket for a long time.  I'd love to take GoPro video similar to what the weather balloon folks have been using, but on a much shorter time scale.  Guidance (on the way up) has been one of my biggest challenges in design, so I am very excited to see what you continue to develop here!

I have got a question: How do you compensate for the gyro's drift? Normally a IMU would use a accelerometer but in case of a rocket the majority of the acceleration doesn't come from gravity which would tell wit where "down" is. I would really like to know how you do that

Damn you answered quick - thanks (=

Is that accurate enough though? And how do you combine the readings from the gyro with the compensation from the magnetometer? Kalman filter?

From datasheets and crappy math, it should be enough to prevent drift for a <5min controllable flight segment. Yes, kalman filter is the aim

thank you (= I will watch your project very closely as it progresses. Best of luck!

From datasheets and crappy math, it should be enough to prevent drift for a <5min controllable flight segment. Yes, kalman filter is the aim

could u send me a code and its algorithm ,please?

this is my email

Again, as stated in my project logs; this is ITAR regulated, cannot share it. Go code it yourself, not too hard since it's taped together from examples and common sense

I've a suggestion.Use some solid fuel as it is easier to handle. Liquid fuel spillages can go horribly wrong.

Not doing liquid fuel for this rocket, solid fuel is the way to go

wen will it fly?

Waiting for the moment :D

No idea, still need to do preflight certification and testing

ArsenioDev wrote 07/28/2014 at 16:32 • point
Well when im using his code the fins initialize a roll vector when i need them to initalize a pitch and yaw vector

zakqwy wrote 07/28/2014 at 17:03 • point
During pitch and yaw, I'd imagine you want opposing pairs of servos to move in concert with each other, while a roll vector has all servos turning in the same direction (so fins 180 degrees apart turn opposite directions). Can you try reversing two of your servo outputs?

zakqwy wrote 07/30/2014 at 17:36 • point
I am in the continental US (Minneapolis, MN). Can you link to the ITAR regs that prevent sharing this outside the country? I'd like to read through 'em to make sure my project doesn't have any issues.

Can I also get in on this? In Seattle myself. Have a link for the hangout?

REH,  you can reach me at arsenio.dev on hangouts

zakqwy wrote 07/22/2014 at 18:21 • point
Excited to see this! I've got tons of questions (as we're facing a lot of the same challenges) but I'll hold off until you have a chance to flesh out the description a bit.

The 2016 Hackaday Prize
Anything goes digital transition for radio control appliances. Like HDTV, but for RC projects
Project Owner Contributor