Create a magnetic 4 watt high power LED head lamp for applications like longboards out of an old hard disk drive for less than 25 $.

Skating at night can be really dangerous. Other road users won’t see you and you can’t see the road you are riding on. That’s why I invented the Beamboarder. It’s a mobile head light that allows you to ride for up to two hours in absolute darkness with a sight of several meters. The LED and the rechargeable battery can easily be attached to your board on any ferromagnetic material. The Cree LED is a high power light source out of an array of several LEDs with the highest standard of light efficiency you can find actual on the market. Only minimum changes on the longboard truck have to be done. The construction of the lamp is possible with a small amount of money and equipment. Even it’s easy, there are several risks for you and other road users you have to keep in mind. The following instruction shall guide you through the experience I made and how you can build your own Beamboarder by yourself. Keep in mind that this product is still in early prototype status. 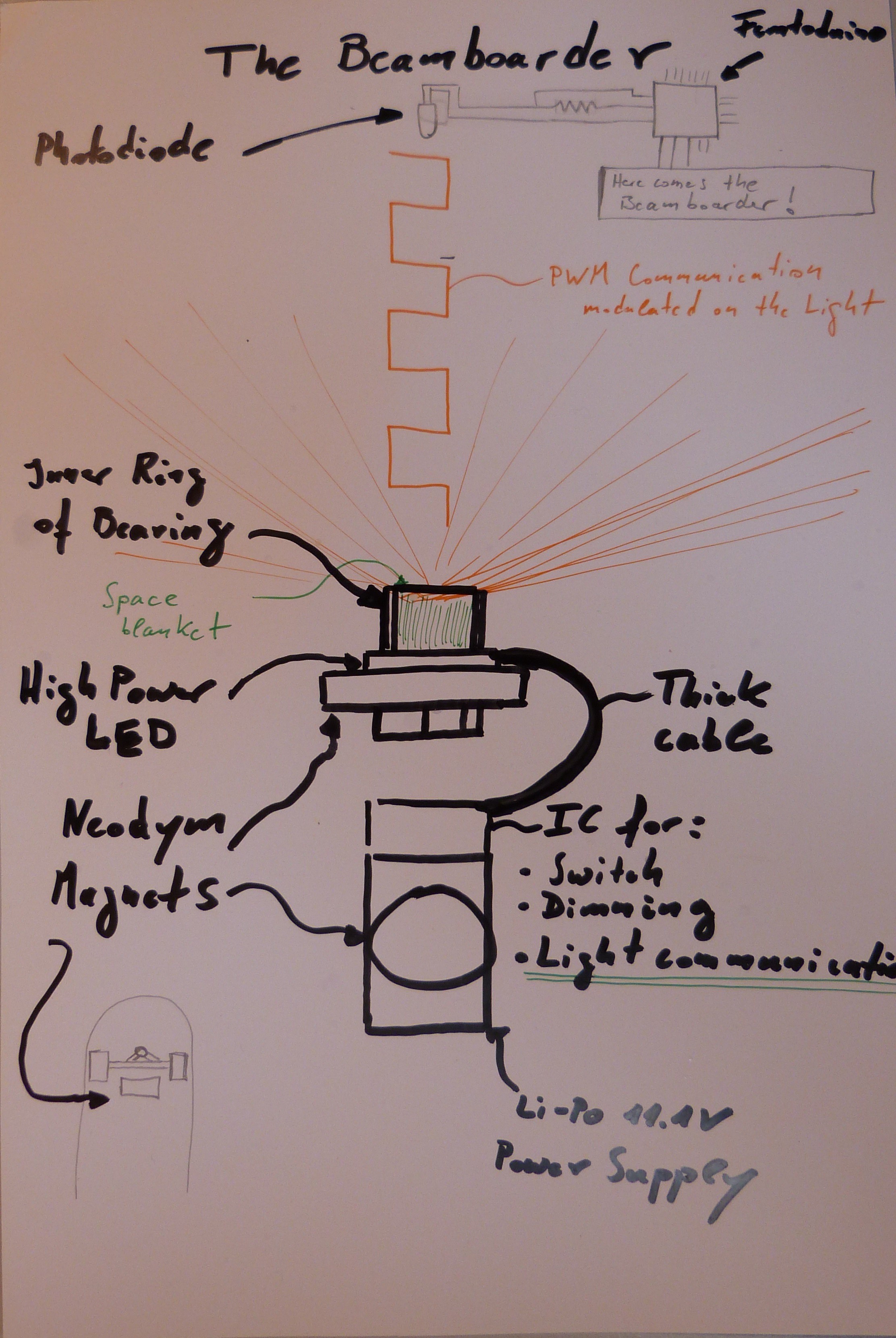 At first you will need an old 3.5” hard disc drive (HDD) with as many gigabytes as you can find. Old HDDs with high capacity for their time will have huge magnets from my experience. These HDDs often have multiple discs. Open the case with a Torx 8 screwdriver. Under the large sticker on the cover you will find additional screws that you have to remove. After opening the coverage you see two thick iron plates at the end of the read head. These two plates hold your magnets. In most cases you can remove the first magnet-plate with a lever. The force between the two magnets can be quite strong. For the second magnet-plate you have to remove the read head with a screwdriver. Sometimes this plate is also fixed by some screws on the other side of the HDD. 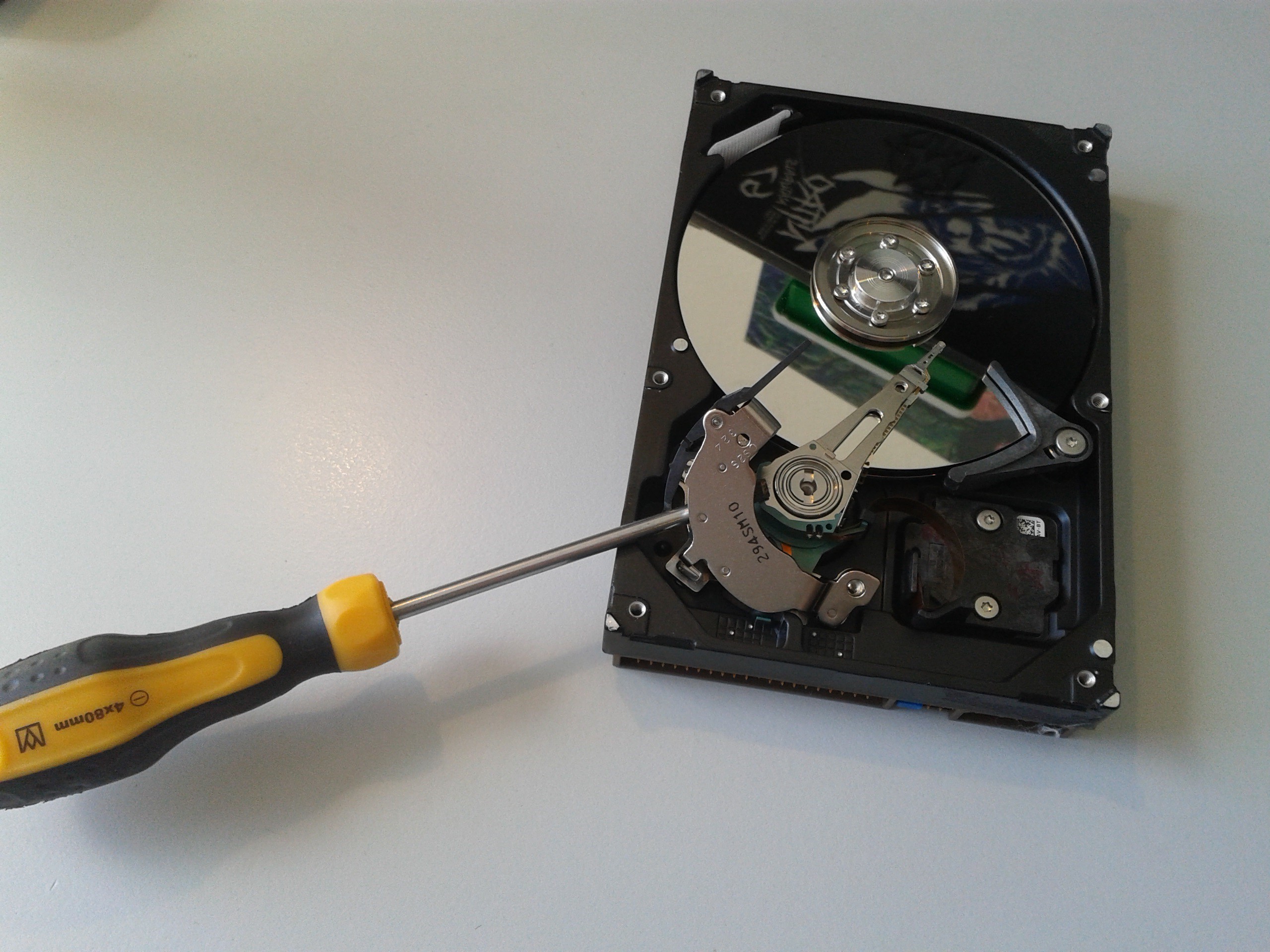 The Beamboarder is based on these two plates. Handle them with caution. When they snap together uncontrolled your finger or the magnets can get damaged. The LED must fit on the iron plate without overlapping. Look at the LED datasheet for the dimensions. A large plate will decrease the temperature of your LED what causes a higher efficiency and longer lifetime. With a small plate the LED is getting to hot and the lifetime will decrease. If you cannot touch the metal anymore do not use it in this way. Try to find HDDs with large plates and stronger magnets. 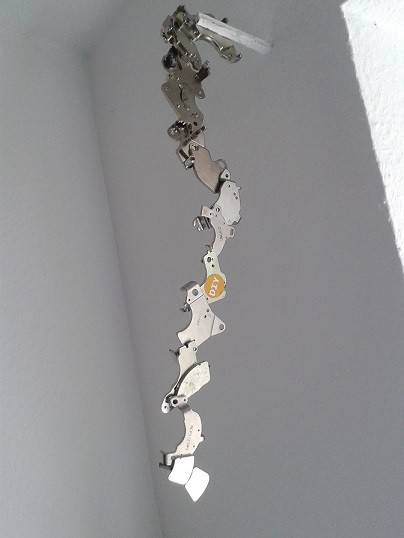 Now look for a place at the trucks where the magnet will hold. The kingpin is the only ferromagnetic part of most trucks. If your magnetic force is not strong enough you will need another HDD with bigger/stronger magnets or other trucks. Paris trucks have the ideal design and will safely hold your lamp. For downhill and freestyle skating I recommend to stick the LED directly to the truck without the magnet. But keep in mind that you will need a chisel for removing the led when you stick it directly to your trucks.

So check your skate equipment with the magnets before you order the rest of the material. Some trucks are not capable to hold the Beamboarder safely. You should also think about possible beam angles at this point and if you are gone blind other people on the road.

The components I have listed are a result of many experiments. First I tried to use 9V Li-ion battery in the 9V Block size with 680 mAh. Soon I had to learn that these batteries actually have only 8.4 V fully charged. This voltage is much too low for the Cree XLamp CXA1304. The LED will only glow a little bit. Use the 9.6V Ni-Mh 270 mAh batteries and the LED will glare like a star. A fully charged battery will have a voltage up to 10V. This will cause a very bright light of about 600 Lumen. The brightness of your LED will follow the discharge voltage of your battery. The following figure shows the voltage process over the charge that’s remains in one cell: 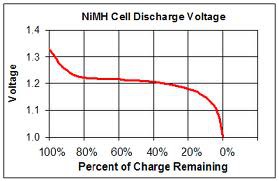 You can use a resistor to dim the light, but be aware that this will decrease the efficiency and increase the complexity of your setup. Other batteries like an 11.1V Li-Po will destroy this version of LED arrays.

For maximizing the lumen per watt use the LED version with the highest ANSI White value you can get. The cold white LEDs will be much brighter at the same energy consumption. The LED works also as a safety circuit for the battery. Under a voltage of about 7V the LED turns out and preserves depth discharge. The reason for that is the threshold voltage of multiple LEDs in series inside the Cree CXA1304.

Crafting this LED lamp can be a mess but also a lot of fun. Try to stay clear with the components and remove all dirt with some tissue from the metal surface you want to put on the LED.  Have your tissues ready. Combine a small amount of Arctic Alumina Thermal Adhesive 1 to 1 in the middle of the plate and mix is up with a small stick. Place the LED on the Adhesive and press it gently on the plate. A little amount of adhesive should come out on every side of the ceramic body. The drying will last several hours. Do not turn the LED on before the adhesive...

Emerica wrote 08/18/2014 at 18:20 • point
Skateboarding most of my life that's a nice idea, especially for sidewalk riders.
On the contest aspect though, how do you plan to make it connected?

1. You must actually build something
2. It must involve some type of electronics that are connected to something
3. Our main requirements have to do with documentation. This includes lists of parts, schematics, images, and videos. Remember, Openness is a Virtue.

The magnets connect the high Power LED to the longboard. Mission done :D
You should also check the new video.

Emerica wrote 08/19/2014 at 01:49 • point
I will check your video, but from what I remember they narrowed "connected" down to transferring data to and from something in some way. That's how it's described in one of the first videos on youtube anyway. I haven't really gone through the fine print, but I hope that's not some technicality that knocks you out right off the start.

Lyon wrote 08/19/2014 at 09:27 • point
I had an idea for connecting the Beamboarder over night and will try to update everything. Thanks for your feedback. It was really inspiring!

Adam Fabio wrote 07/24/2014 at 03:01 • point
Great project Lyon! Thanks for submitting The Beamboarder to The Hackaday Prize! I really like how you recycled hard drive magnets both as a mounting method and as a heatsink for those power hungry LEDs. Can't wait to see your video for this project! Good luck!

Lyon wrote 07/19/2014 at 22:57 • point
There are better neodyme magnets for the LED but for holding the battery under the board you will still need the hard disc drive magnets with the plates.

The design you showed in the sketch could solve one problem. Sliding to the side at night will be difficult with the lamp in the front. The lamp at the rear truck pointing forward would solve this problem. But the magnets cannot be attached in this direction :/. You will need a fixed design like yours.

davedarko wrote 07/19/2014 at 20:05 • point
Have you considered using standard neodyme magnets so you don't have to harvest old hdds? I love the concept of adding leds for safety and thought about a spacer thingy myself some time ago. Here is a sketch of a mix of my early idea vs. the inspiration i got from your project.

An LED-throwie which only activates at dawn or night. Add a magnet and you can stick it at metallic surfaces.
Project Owner Contributor

2021 Hackaday Prize
A low-cost solar lamp that can be used as a replacement for harmful kerosene lamps and a learning Kit for STEAM Education.
Project Owner Contributor

Qi Charger for iPad Mini next to bed