E-TKT is a DIY label maker that mixes both old fashioned and contemporary technology to create something as simple as... Labels!

The initial spark for this project came from an ordinary manual labeling device that I bought to organize my workshop. I was VERY UPSET when I noticed that it was basically rubbish, getting broken and unusable after just a few operations.

I knew I could easily buy a brand new modern electronic thermal label printer (such as Brother), but something about the vintage embossed finish fascinated me. Also, these new models use expensive proprietary cartridges that create a lot of trash after use.

After all, even though the pressing mechanism was poorly made, the characters' carousel was pretty sturdy and sharp. So I thought: can I build over its principles to create a functional device? If so, then why not make it physical-digital?

E-TKT is a DIY label maker that mixes both old fashioned and contemporary technology to create something as simple as... Labels! 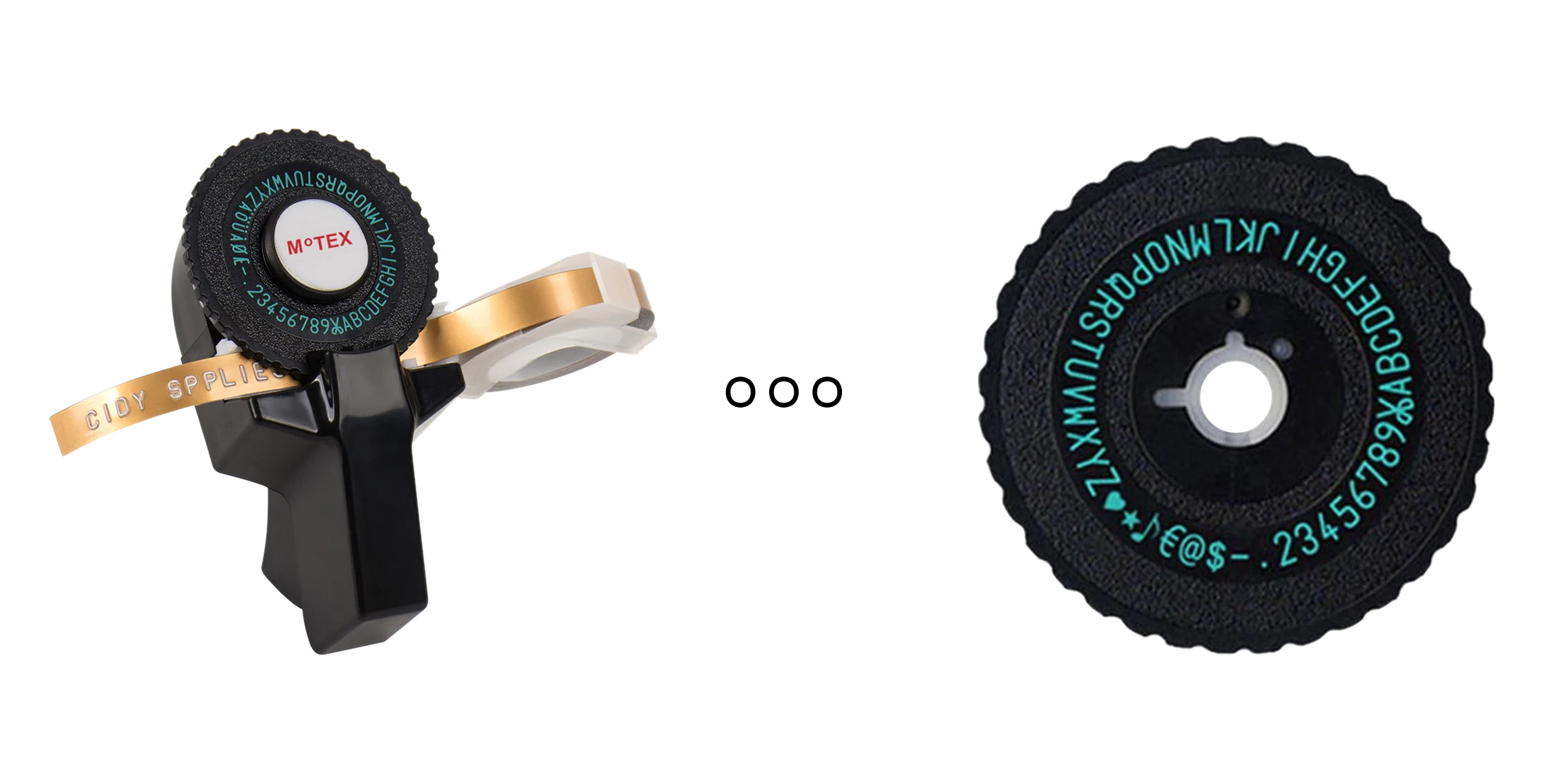 The initial spark for this project came from an ordinary manual labeling device that I bought to organize my workshop. I was VERY UPSET when I noticed that it was basically rubbish, getting broken and unusable after just a few operations. This little plastic hook (circled in red) grabs a gated cog (the white plastic part below) to feed the tape forward. I tried to fix and reinforce it, but the failure was unavoidable because there seems to be a critical flaw in the project: it is too weak for the lateral resistance imposed. 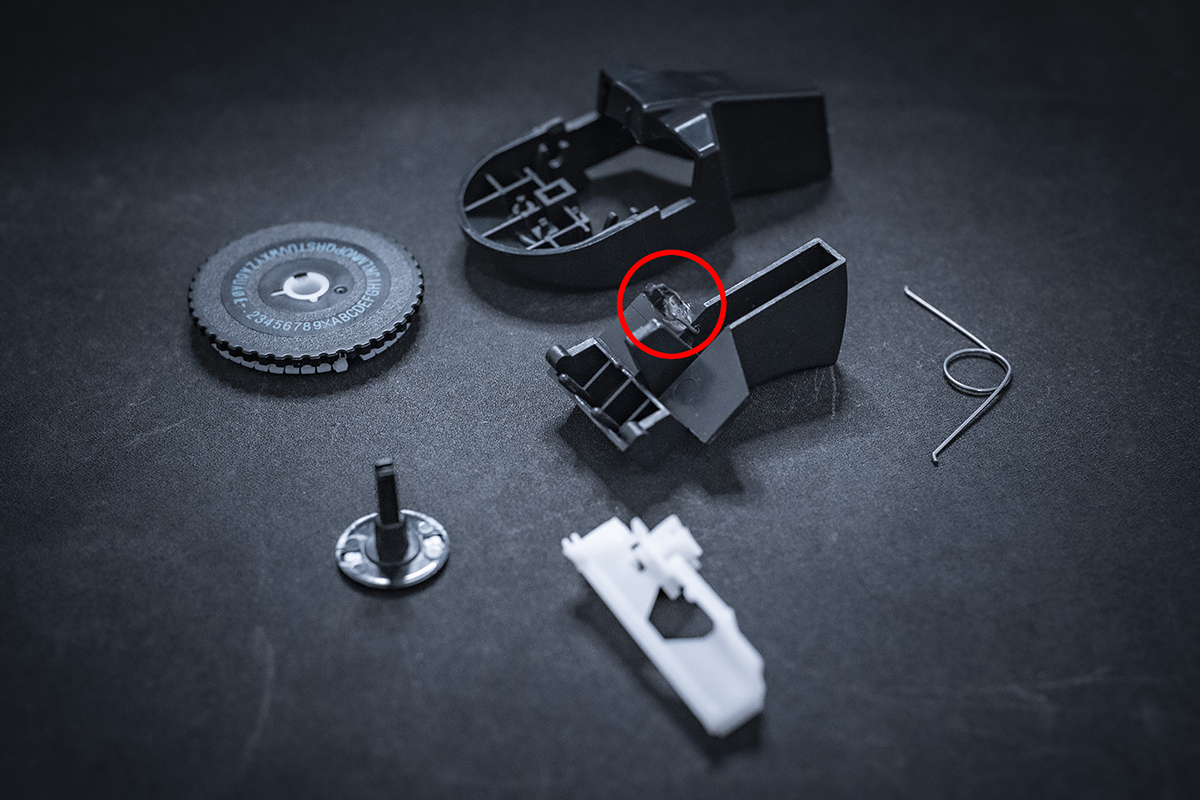 I knew I could easily buy a brand new modern electronic thermal label printer (such as Brother), but something about the vintage embossed finish fascinated me. Also, these new models use expensive proprietary cartridges that create a lot of trash after use.

After all, even though the pressing mechanism was poorly made, the characters' carousel was pretty sturdy and sharp. So I thought: can I build over its principles to create a functional device? If so, then why not make it physical-digital?

...why bother mixing an archaic printing method with current automation and connectivity features? Because why not? It was a technological blind spot to be explored!

I've later realized that it was what I’ve been attracted to. According to Wikipedia:

“An anachronism (from the Greek ἀνά ana, 'against' and χρόνος khronos, 'time') is a chronological inconsistency in some arrangements, especially a juxtaposition of people, events, objects, language terms and customs from different time periods”.

The point is: even though the process is digitalized, the resulting label is totally old school and there is no easy way of telling if it wasn't made in the traditional way.

⚙️ how does it work?

An ESP32 commands the label production and also serves an on demand web application to any device connected in a local network.

Neither internet is needed, nor installing any app.

The whole process of connecting the E-TKT machine to a local network and then launching the app is aided by a small OLED display that provides instructions and a dynamically generated QR code with the URL, according to the IP attributed by the WLAN.

The web app provides text validation, special characters, a preview of the exact size of the tape, an option to select the desired lateral margins and also real-time feedback during the printing (also present on the device screen). There are also commands for attaching a new reel, manually feeding and cutting the tape.

The label production itself uses the same mechanical principles as the original machine did, but is now automated. A stepper motor feeds the tape while another selects the appropriate character on the carousel according to a home position acquired by hall sensor. Then a servo motor imprints each character by pressing the carousel to the tape. That happens successively until the end of the desired content, when there is a special character position to cut the label. A light blinks to ask for the label to be picked.

Have you see the vwestlife video on these? He has a model with a changeable both disk which could be interesting for you. https://www.youtube.com/watch?v=3w95K0FOIo4

Hello! Haven't seen that video yet, even though apart from the red label maker, I already knew the other two the author reviewed.

I'm planning to make the disks interchangeable, I think it will not be a big challenge.

Thank you for the tip!

Hi! Very cool, and I just bought a dymo omega for this purpose.. but thinking again and looking around, I have not seen what specific label maker you used? Did I miss it?

Also I would like to modify the setup a bit and integrate it into my home assistant, kind of the same idea with a local network web interface but a bit simpler. And I don't need another page open ;)

Right, found it now, a Motex E101. Would you recommend I just order one of those instead?

The plan was to have a manual one also just in case, and for portability.

About the label maker model, yes, it seems this MOTEX is the exact model and I highly recommend you to use the same since the machine was projected with it in mind. It is sold with other names like CIDY, etc. Actually, if you take a look at the BOM, you'll see the disks are sold separately, so you can go straightforward to it.

About the home assistant, go on! Nice idea, and it will work because the E-TKT belongs to a WLAN. Whatever app can access it, can send instructions through a GET command.

PS: at the moment I'm working on a PCB for the machine ;)

Oh, i only needed the disk? And here I was so sure you would have used the tape feed as well.. my plan was to do any modifications needed with your project as a base, and the tape feed on the dymo was rather fiddly so I figured I'd need to keep it. But also it would damage the tape sometimes! I have ordered a Motex now anyway so it'll be interesting to see how it compares. Nice to be able to use your design as is!

I was thinking I'd add mqtt but GET should also work.. but then I do like the auto setup with mqtt devices in home assistant.. we'll see. Not sure how common iot label makers is yet.

Thanks for your time and the effort you put into documenting this, beautifully done

And a PCB would be great! Would you be willing to sell one?

BTW, with regards to the home automation and UI part of things, have you or anybody else heard of any voice assistant enabled label maker support?

Would likely drive anyone insane misheard/misinterprated labels being made, but would be cool to explore if useful (and otherwise also a fun partytrick)

Should be fairly straightforward to implement with reagrds to the printer inferface, but i'm not to sure about what support there is among voice assistants to call custom functions and supply them with a custom string as input?

Hi Petter! About the PCB, I don't know yet, just sketching it for now, I might need to study on how to sell it worldwide, but that's a nice idea! FYI I've just made a new log update with the PCB progress so far, if you might want to check it out.

About the home automation, I never heard of any kind of implementation of voice assistant to that specific need, but I think that having a spelled + visual (OLED display) confirmation before printing might solve this misprinting issue you've pointed out. Anyways, I've noticed that the wrong labels are the funniest :P Bug or feature?

This idea to explore voice assistants is something that interests me but a bit further into the future. An ESP32-S3 might be another way for solving this locally, since it has speech recognition capabilities. I didn't delve deeply though, might not be enough for that specific spelling need.

Would be cool to have it work without internet. As you have the ESP32 which Bluetooth Low energy compliant, you could write an android App to speak to your stuff directly.

Could be quite straigthforward to do it

Hey, thank you! It already works without internet :)
You just need a wireless local network, the "web app" is provided by the ESP32 itself.

Thank you very much :)

What an awesome project! I love these old school labels and own a cheap version of it as well. I think I will do a build.

A few ideas to improve that thing further:

1. Wouldn‘t it be fantastic to have custom pressing discs? Maybe they can be done using resin 3D printing.

1b. If that disc has only elements of a 14-segment display, every character can be printed.

1c. Additional there could be simple dots in a column (8-12) to print simple icons

2. Maybe you can save some costs and room if the servo is replaced by a geared dc motor with a cam (one whole revolution per press)

3. I can assist in doing a custom PCB, if you like. Just drop me a PM

And thank you very much for the ideas!

1.a Amazing, didn't think about it! I've been more of a FDM 3d printing guy until now. Do you know if is there any hard resin that wouldn't wear easily against the tape and the press, while keeping the flexibility? I guess the print precision might to be good enough... That opens many possibilities such as custom fonts and symbols... Nice!

1.b This could allow for a much smaller disk and thus, device. I've seen you are a fan of miniaturizing stuff, great.

1.c That goes in a direction of an idea that I had at the beginning of the project: making a braile printer. There is a braile tag maker that uses a disk too, but it seems expensive. On the other hand, braile have a matricial principle and I saw this project (https://github.com/carloscamposalcocer/OpenBraille) that uses a rotary mechanical encoder, it is another way for doing it, instead of using a carousel.

2. Nice, once I did a prototype had a geared motor that automatically turned itself off after a complete turn, might be a good try.

3. Cool, I was in fact planning to do a manufactured PCB (which would be my first), lets talk and see how to make it work, I'll PM you ;)

That top plate looks so cool.

Thank you Richard! For that, I've used Cura with "Bottom Pattern Initial Layer" set to "Concentric". It somehow gives a "vinyl record" anisotropic appearance, doesn't it?

The 2016 Hackaday Prize
Memtype, an elegant solution to have your credentials stored everywhere.
Project Owner Contributor