"Lixie", an LED alternative to the Nixie Tube

Always jealous of people who could afford big Nixie Tubes, I rolled my own alternative with WS2812Bs and laser cutting!

LIXIES HAVE DROPPED IN PRICE TO $36.99, AND ARE AVAILABLE RIGHT NOW! https://www.tindie.com/products/connornishijima/lixie-an-led-alternative-to-the-nixie-tube I've always been a fan of the Nixie Tube. Beautiful typography, endearing glow, and very clever technology. But when commercial production stopped in the 1990s, prices for surplus Nixie Tubes began to rise. Smaller tubes like the IN-16 are still only about $3.50/piece, but bigger and more desirable tubes like the IN-18 can run up to $45/piece. If you wanted to make a 6-digit clock, it can cost up to $270 just for the tubes! And they're potentially dangerous. And they might "burn out" next week. And they need special switching circuitry. And they're old news. So let's modernize the Nixie Tube! 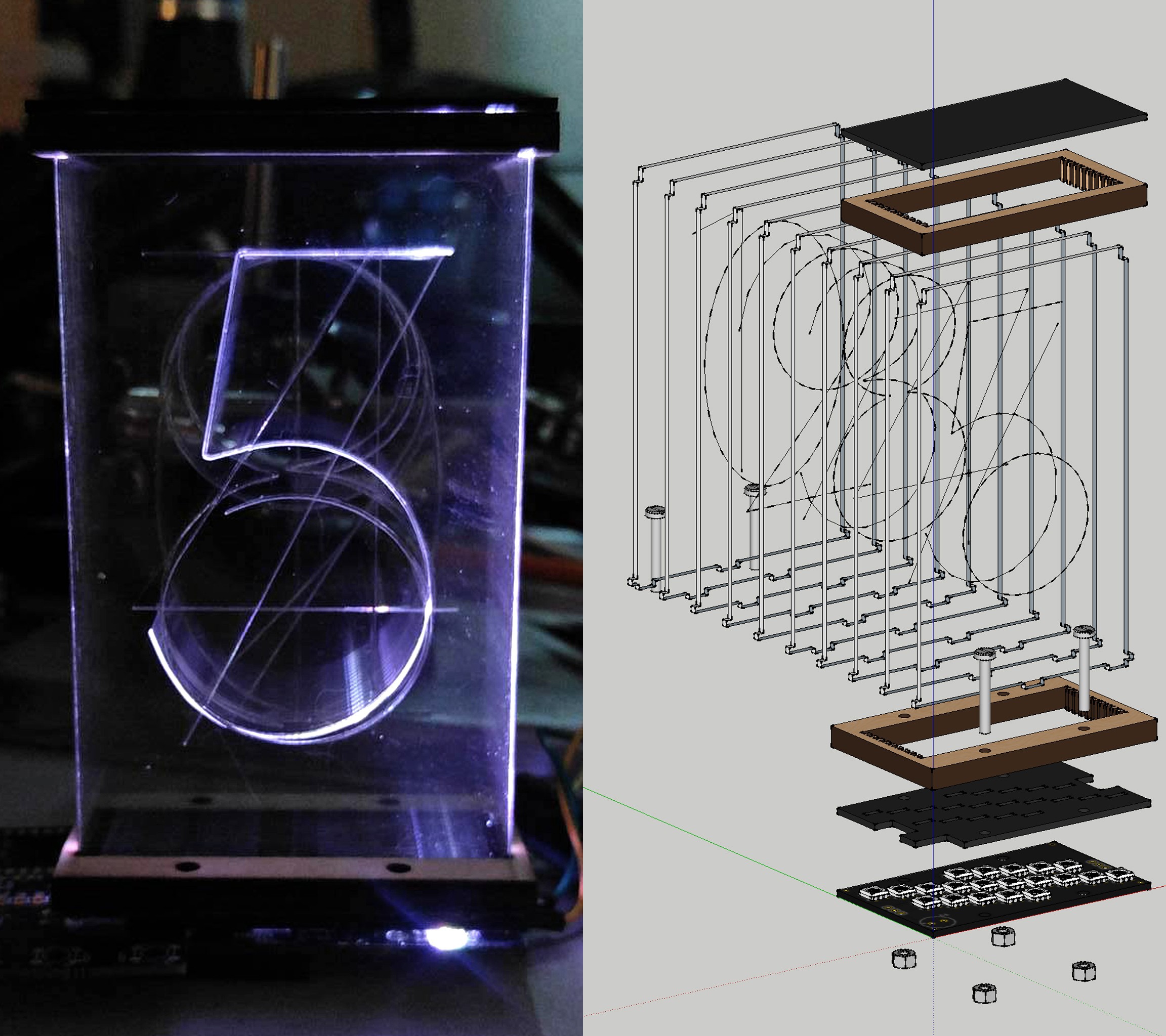 Edge-lighting panes of acrylic etched with a design has been done for decades, but they've always been static information like an "EXIT" sign. If you stack multiple panes of acrylic (each with a unique design) and light them individually, you can change what design the user sees!


This makes edge-lighting perfect for a numeric display! And since I love the look of Nixies, we'll emulate the typography as well. At the end of the day, what I've made is a beautiful over-sized numeric display using WS2812Bs and a laser cut digit assembly!

The Lixie has extremely simple setup, just connect the 5V, GND, and DIN pads to an Arduino and use the Lixie library to write a digit to the display! That's it! No HV switching, PCB footprint, or worries!

Since the Lixie is just wired like a WS2812B strip, you can connect the DOUT pin of one to the next and show a number as long you'd like!


Here is a video demonstrating the result:

What is the method of making symbols?

Are there some current improvements being researched? Any estimate as to when these will be available again?

Greetings. How small can these lixies be? Is it possible to miniaturize them in such a way that they can go inside a wristwatch? Something like this one:

I should get to grips with the new library, are you sharing the code for the clock in the video with the rainbow effect colour scheme behind?

I have some specific coding questions, what is the best way to contact you to ask?

Is it possible to add a letter 6 letter word? (11 layer of acrylic)

Copied from my question to Conner via Tindie, which was not answered after a few days:

Hi -- I ordered and received two displays recently (didn't see a 1000uF cap in there though -- no big deal). I want to get them working with my Particle Photon board. I have the "counter" demo, Lixie.cpp/.h in a Particle project. I've made most (not all) of the mods you suggest in the Particle community forum post. The ones that are giving me trouble are where you say to make modifications to the FastLED library. Normally I would just copy the .h / .cpp of a library that I want to modify into my Particle project (I'm using the web-based IDE Particle Build), but that lib has a gynormous number of ancillary files. Did you have to clone the entire github FastLED repo locally in order to make those changes?

Does the input pin require 5V or is it sufficient with 3.3V logic from ESP8266?

Sometimes WS2812B LEDs can be picky about logic levels, but in my experience the Wemos D1 Mini and NodeMCU breakouts of the ESP8266 have never required a level shifter. (5V power, 3.3V logic)

However, I *did* experience some issues running Lixies off of a Raspberry Pi B+ GPIO in the past, so not all 3.3V GPIO are created equal it seems.

Great to see them back in stock on Tindie!

Thanks for all the help Jasmine!

Wow, great to hear such a success story. Really love the way they look. I'm hoping to do something similar one day, although full size robots are a bit harder to sell!!

If you haven't tried it yet - I highly recommend a Tindie store. It has built-in traffic from people shopping there, and a high overlap of people already into electronics/engineering.

I'd buy a full-size robot if it means I never have to peel protective paper off of Lixies again! ;)

ok, I find it out by myself . The right  DOUT pin on the NodeMCU is pin D1.

And the hight of the numbers is 67mm.

Hallo, more than 10 years ago I build a really Nixie clock with russian IN18 and it works until today.  Therefore I am very interested in this project. I have ordered a view days ago 4 Linie modules and wait for it. In preparation I have flashed the Linie_NTP_Clock.ino to a NodeMCU 1.0(ESP12E-Module) with the Arduino 1.8.1 IDE. The IDE Monitor shoes this lines and I think it is ok.:

On the pin 5 of the NodeMCU I have connected WS2812BLED's. But there is no result, not DIN signals to the LED stripe. The NTP_Colck.ino is the latest release from GitHub (I hope so) with " #define DATA_PIN 5 " line.

Dear Connor, Have You an idea what can be wrong ?

And one more Question : What is the height of the digit number. I only have found the dimensions  of the Acryl panels , not from the numbers.

Have you thought of doing a 14 segment display style? Each of the panes consisting of a segment that can create an alpha numeric character while lit with certain neighbours?

I have some ideas for this - but I've yet to prototype it. The tough part of making this a segment display is that the difference in depth between panes can cause some unwanted distortion to the number/letter being shown. However, with the air-gap between digits removed this can be somewhat mitigated in exchange for some extra light bleeding.

I’m thinking to incorporate the joints in each of the segments may be an option… a small overlap in all of the possible variants. Picture a slightly larger circle where the joins would normally be. Planning out the order that best suits angle of view would be key though. Bottom segments at the top, top segments at the back if you’re planning on having it lower than eye height… it would be something to play with and see what works best for sure.

Any reservations in me trying it out if I can get my hands on some spare acrylic? I’ve got everything else handy including access to a laser cutter.

love em, great modern revival of the idea ... when are the 14-16 segment versions going to arrive??? (looking for text display capability) Now I want to make my own, to go along with my discrete processors :-D

The catch is that I'd rather have hexadecimal (or at least octal).

Hi Connor, I really like this project and how it looks. I help teach electronics at the local school and I think this would make a great demo of NeoPixels and Arduino/Raspberry Pi etc. Are the laser files available anywhere or are they not going to be public domain perhaps?

What is the thickness of the acrylic? 2mm? 1mm?

The 2016 Hackaday Prize
Use your lasercutter to make an optics bench.
Project Owner Contributor

I've always been a fan of Stephen Hawking's signature speech synthesizer, so I made a publicly available version of it!
Project Owner Contributor