Probability this can work: 98%, working well: 50% A LOT of work, and utterly ridiculous.

List of projects for homebrew, DIY, and hacking of 8088 PCs

Miscellaneous projects that I think are cool!

The idea is to replace a PC/XT clone's 8088 CPU with an AVR. Not an emulation, per-se... more a test-bed for AVR development, with access to the XT's peripherals, ISA cards, CGA, and more.
Maybe a full-on AVR-based "Personal Computer", though, x86 emulation is definitely being considered.

This project has been an adventure of the most ridiculous sort...

At the time I started this project-page I planned on emulating an 8088 in an AVR, so the AVR could be a drop-in replacement for the original CPU in an IBM PC/XT clone. The discovery that the original 8086 ran at something like 0.3MIPS, and the knowledge that AVRs can run at 20MIPS gave me the idea that maybe it would be possible to emulate an (even slower) 8088 in an AVR at usable-speeds, and maybe even run faster than the original.

I spent quite a bit of the lead-up time learning the (then, to me) "black-box" that x86-architecture has been to me for decades. This was aided by the fact that the original technical references for the 8088/8086 go into quite a bit of detail explaining *why* they made decisions they made in this (then new) design, in comparison to Intel's earlier processors, like the 8085, which are much more similar to the Atmel AVRs I'm so familiar with. E.G. Why do they use "segments" in the x86 architecture? And what the heck does 33:4567 mean, as an address, anyhow? (One of the many things I couldn't wrap my head around in previous endeavors trying to understand the x86 architecture).

From there, I went on to [re]assemble my PC/XT clone from parts that'd been poorly-stored for years in various boxes with other scrap PCBs and no anti-static bags. That endeavor, alone, was utterly ridiculous; leading me to sleep upright on a tiny spot on my couch for days, if not weeks; home filled with open boxes, cat sleeping angrily under the TV. And some completely unexpected, and amazing, results in the process. Including meeting someone who emailed to me exactly the (very rare) information I needed within 3 hours of my contacting an email address found in a forum post written 17 years earlier. (whoa!). Also, the surprising discovery that PNPs' emitters can be connected to the ground-rail and make for a [only slightly-differently]-functional circuit than the NPN I'd intended. Also, some "fun" with computers that seemingly-consciously refused to be of assistance (one, quite literally, glaring back at me in contempt).

As it stands, I've finally got the PC/XT clone assembled and running in an ATX case, and, with the help of a fellow HaDer, even installed my very first x86-Assembly program as a BIOS-Extension ROM, that it boots straight into!

Still, at this point in the story, I'd been planning to emulate the 8088/86 instruction-set within my AVR... And I'd done quite a bit learning about the instruction-set... 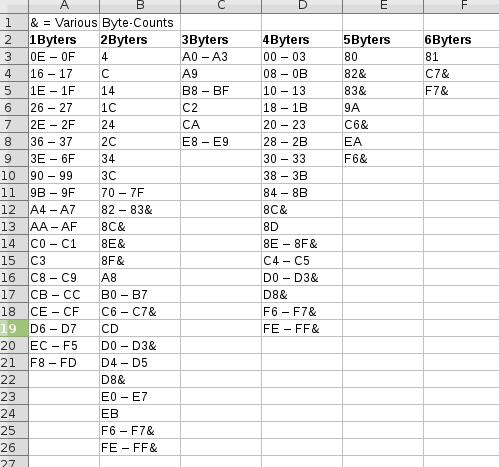 "That's a pretty big lookup-table, nevermind all the code. But I have *some* ideas about how to shrink it... maybe at the cost of execution-speed."

Also, at this point in the story, I started considering other ideas, such as emulating *hardware* within the AVR... Thanks to some other projects 'round HaD. E.G. Why use the 8250 UART, on an ISA card, when the AVR has a USART built-in? I did the math, and discovered that writing a byte to the AVR's USART transmit-register would take ~3AVR instruction-cycles, whereas doing the same with the 8250 could take more than ten times as long! Similarly, if the 8088's 8KB BIOS ROM was stored within the AVR, rather than on the 8088's "bus-interface", execution of the BIOS (the Basic Input/Output System, used for *way* more than just POST!) could be *significantly* faster.


This is the point in the story where I take a step back and start thinking about what led me here in the first place... not only in terms of what I'd discovered *during* the project, but what led me to start this project...? And I realized, the goal from the beginning, from *years* before starting this "project," was to use an otherwise now-outdated (some might say "useless") system's motherboard and peripherals with the processor-architecture I'm already familiar (AVRs).

So, emulation of the x86 instruction-set/architecture was never really in the original goals... I got sidetracked (what? Me?!). But it has been a useful learning-experience....

You wrote that the original technical references explain the various design decisions and answer a lot of 'why did they do that' questions. Could you share the references so we can also educate ourselves ? Thanks :-)

Oh my... no wonder I had this one under "unread emails".

I also tried to OCR it, but the utility did some weird stuff (and made it larger) so I only used that for searches, then referred back to the original (scanned) document.

The explanations, as I recall, were related to how they moved from the previous architecture (8048?) which is much more similar to 8-bit microcontrollers of today, like the AVR or 8051, so helps to explain why they did things like segment-addressing and whatnot in the (then new) 8088/86 in a manner that makes some amount of sense to someone familiar with 8-bitters.

Very interesting and good to read, keep it up!

Why thank you, Sir! Your custom-computer project looks pretty interesting, as well!

I "liked" this before I really knew what it was.  Now I wish there was a second like button.  Keep it coming; this is great stuff!

This is a crazy project.  That's the cool kind.

Your #Cat-644 is definitely one of the inspirations. Recently reread your thoughts on an AVR-based virtual-machine. Would be hard to beat that level of "emulation" speed! I've written a draft-log on thoughts on which instruction-set to implement, if/when I get that far... a lot of rambling between 8086, or maybe even a reimplementation of the AVR... What'd you use for your project?

Ah, the instruction set.  I took a break from the project for a while.  A coworker helped me made a board, and I was about to sit down and finish the system software, when then 1kb challenge hit, so I did a little side project.  I'll return to this one soon.  As for the VM, I have written a small proof of concept test about a year ago, where I implemented enough instructions to have a little test 'for' loop to see how fast it goes, and if my schemes around ZH instruction pointers work.  It seems to work fine.  I will work on the VM soon, but recently I've been brainstorming alternate instruction set ideas.  Originally, I avoided stack machines, because I don't want the hit of pushing and popping every parameter.  I considered a register machine, but even with only 4 registers, the R,R combinations on simple things really add up, and I really want 1 byte instructions.  I did settle on a register accumulator architecture, where A, B, C,D are registers, but every 2-operand instruction needs to use 'A' as the destination.  This cuts the number of combos directly.  Lately, I have been trying to work out a good register allocation scheme, because the language running on this will have a forth-like syntax, but I need to compile that stack paradigm down into reg-accum instructions.  I think I have a new instruction scheme I want to try:  a 'rotating accumulator.'  I will probably make a post about it soon.

Great thought-points, here. Interesting coming up with your own instruction-set... Sounds great for Forth. I do like coding in C. ;)

I do think you identified some key points, (that everything goes through the bus (singular), and there is what I have been told (and in my limited experience proved real). That is the "interrupt problem". While I know little in the details, that is not a new issue (and maybe could stand some revisiting (sure that is a fundamental change, but worth a bit of discussion since you are doing this up from ground up.

An example of what I mean, is how video data does have some independence (implying splitting th eload on one single busy.

I think there are many areas that can also be on a 2nd bus for that need, and share info that is needed.

There are architecture (concepts , hierarchy structure), I know I am speaking in an area that I have only limited experience, but I also think some possibilities exist, and your system is a good one to consider these bold qestions

Oh, and thanks for the luck-wishing, I'll need it!

The 2016 Hackaday Prize
Add an old SDRAM DIMM to your SBC for a 133MS/s 32-bit Logic Analyzer, add ADCs for a Scope...
Project Owner Contributor

The 2017 Hackaday Prize
A while back I acquired a rare logic-analyzer, whose lone system-diskette needed backing-up. Now this page is all things OMNI 4
Project Owner Contributor