This is handheld autonomous computer running on Raspberry Pi Zero. First version is kind of finished and running, now I'm thinking of something better.

This is computer in brick-like form factor, resembling overgrown calculator. 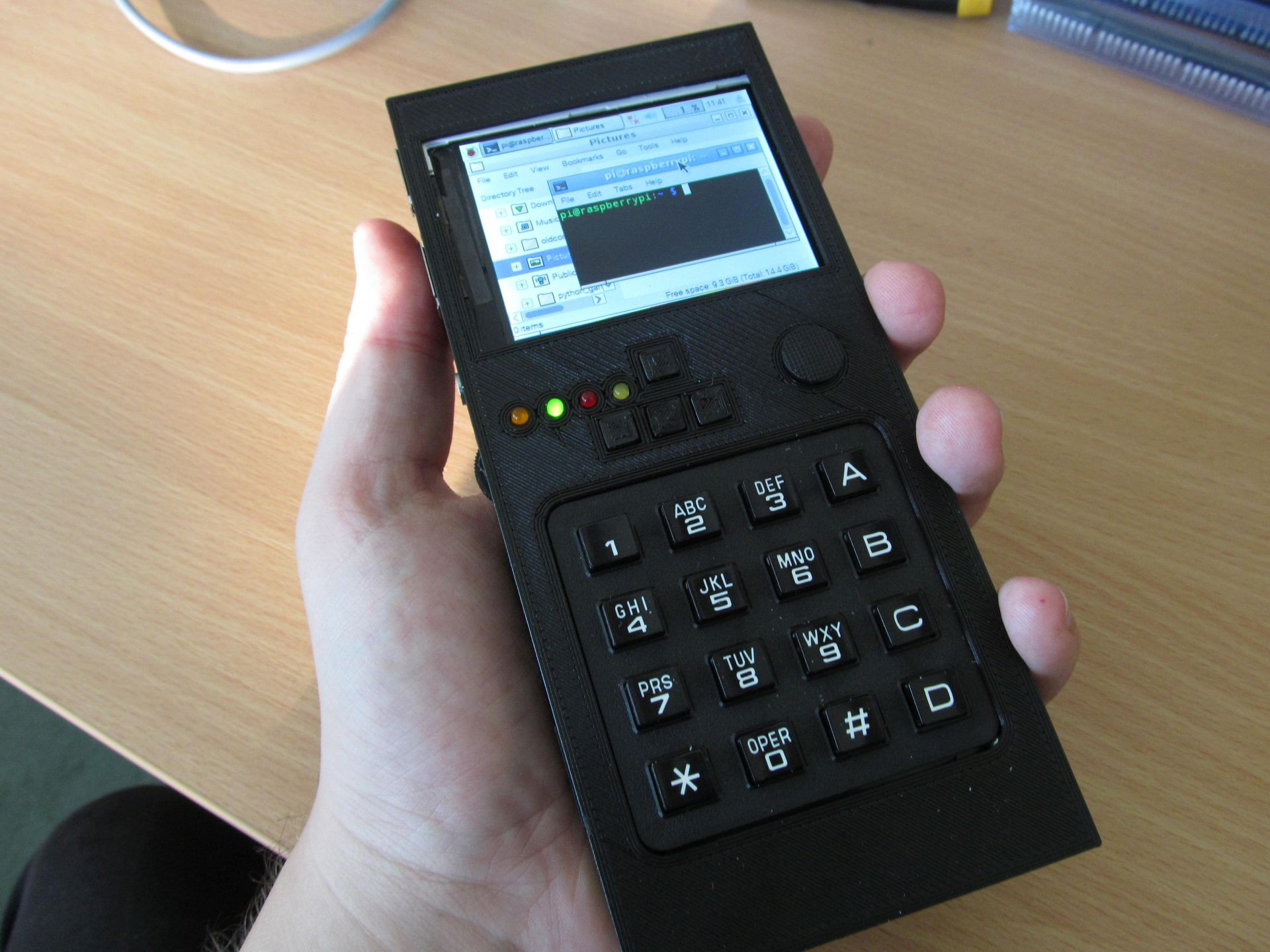 It contains Raspberry Pi Zero inside, plus WiFi module, some power management. It has 320x240 TFT as display, 4x4 keyboard as input device and analog joystick as pointing device. Along with that two full-size USB A connectors, one 3,5mm jack for headphones and 2x6 pni 0,1" header with some PGIO of RPi Zero broken out. The keyboard and "trackpad" interface si very spartan, but it's included all in single enclosure and gives the rudimentary means of controlling the device. External keyboard or mouse is possible to increase user comfort, but not needed.
It sports Raspbian Linux, with all the software you can run in 320x240 display.

This is still under development. It will have larger display and qwerty keyboard.

FAQ:
Q: How is this better than my phone/tablet/smart toaster?
A: If you need to ask this question, then it isn't any better.

Hi nice project! Is that big FPC connector reserved for the keyboard? Composite video is of really poor quality even with a great display so I would recommend abandon it. Actually I have a similar project based on Raspberry Pi Zero, USB Hub, Microcontroller, and a LCD. I connected the LCD to Raspberry Pi's DigitalPixelInterface(DPI), and the image is just crisp and sharp with a resolution of 640*480. I think DPI can transfer image up to 1024*768@60Hz with no problem. Another advantage of DPI is that it doesn't require any decoding chip like composite or HDMI. DPI is the native interface of many LCD panels (I believe including the one you are currently using), directly connect the signal from Raspberry's GPIO to raw LCD panel and it's done. Of course, DPI is GPU accelerated just like composite and HDMI, it doesn't require extra CPU time to display. (I mean, in contrast, SPI or I80 screens like Adafruit 2.2 LCD would require CPU time to just transfer the data, it's just inefficient.) You probably want to try that out.

Yes, the FPC is for keyboard.

I feel like digitally-interfaced displays are the only usable way to go. Currently I'm playing with 320x240 ILI9341 TFT - and the picture is sharp and clean, as expected from digital transfer. It is connected via SPI and AFAIK it uses DMA, so it shouldn't be *very much* CPU clock hungry, or at least I can't see any obvious performance drop. I'm almost happy about it, just the resolution and size is bad. Something like 4-5" and minimally 450 horizontal and 300 vertical pixels are really needed. Some dialog windows are just unusable.

I know there is possibility of DPI connection, but it takes a lot of GPIO pins - https://www.raspberrypi.org/documentation/hardware/raspberrypi/dpi/README.md But for basic 5-6-5 it should be workaround-able. When looking for DPI displays, is there something to be careful about? Some caveats? Perhaps I can reuse the LCD in composite screen, throwing away converter IC and accessing digital signals directly.

That your project is this one? https://hackaday.io/project/19412-pibor-zero I'll take a look at it.

Yes, that's my project. SPI with DMA won't eat up much CPU time. I used to use one without DMA, it was just slow. There are some SPI screens have a resolution of 480*320 and a size of 3.5", probably they can do the job. As for DPI screens, the first thing to mention is that some display need to be initialized via SPI before it can display normally (while some screens don't). The one I used require this, so I connected its SPI to a dedicated micro-controller. Most common DPI screens are 4.3" 480*272 40pins one and 5.0" 800*480 40pins one. These two do not require SPI configuration. There are also 3.97" 800*480 DPI TFTs available on Aliexpress, they usually require SPI configuration. The second thing to mention is that, Raspberry Pi's DPI now requires a minimum pixel clock of 32MHz (it used to be 16MHz). It is just too high so if you are connecting your screen with like breadboard, you are probably not gonna to see the image at all. A PCB is required to even just test.

It already looks like a great development board, but it will make a great little netbook; can't wait to see how the case development takes shape!

Not quite a laptop, but a bookbaggable portable computer to use anywhere, as a Linux or Windows machine
Project Owner Contributor

A tiny Raspberry Linux computer with a keyboard, a daylight-readable screen, and a long-range transceiver
Project Owner Contributor