3d position tracking using our own design of the sensors, an altera fpga for decoding the signals and custom code for triangulation and poseestimation

HTC vive ligthhouse tracking is super nice in terms of accuracy and cost. While a typical mocap system costs a lot of money, a pair of lighthouses cost only approx. 250euro. Then of course you need sensors. But those are rather cheap as well (approx 5 euro). In this log we are going to describe our system, which copies the functionality of HTC system, ie 3D tracking of custom sensors and pose estimation of objects.

At first we tried decoding the signals from the sensors using Intel Edison and MKR1000, which in case of the Edison turned out to be impossible and in case of the MKR was limited to a small amount of sensors. For the Edison the hardware interrupts were not handled fast enough. This is due to a threaded interrupt system. We also tried using the MCU, which wasn't fit for the job eaither.

The MKR was simply overwhelmed by all the interrupts.

We disassembled one of the HTC vive controllers for getting our hands on those sensors. We noticed the HTC controllers were using an ICE fgpa. So we thought if they use it, there must be a reason. 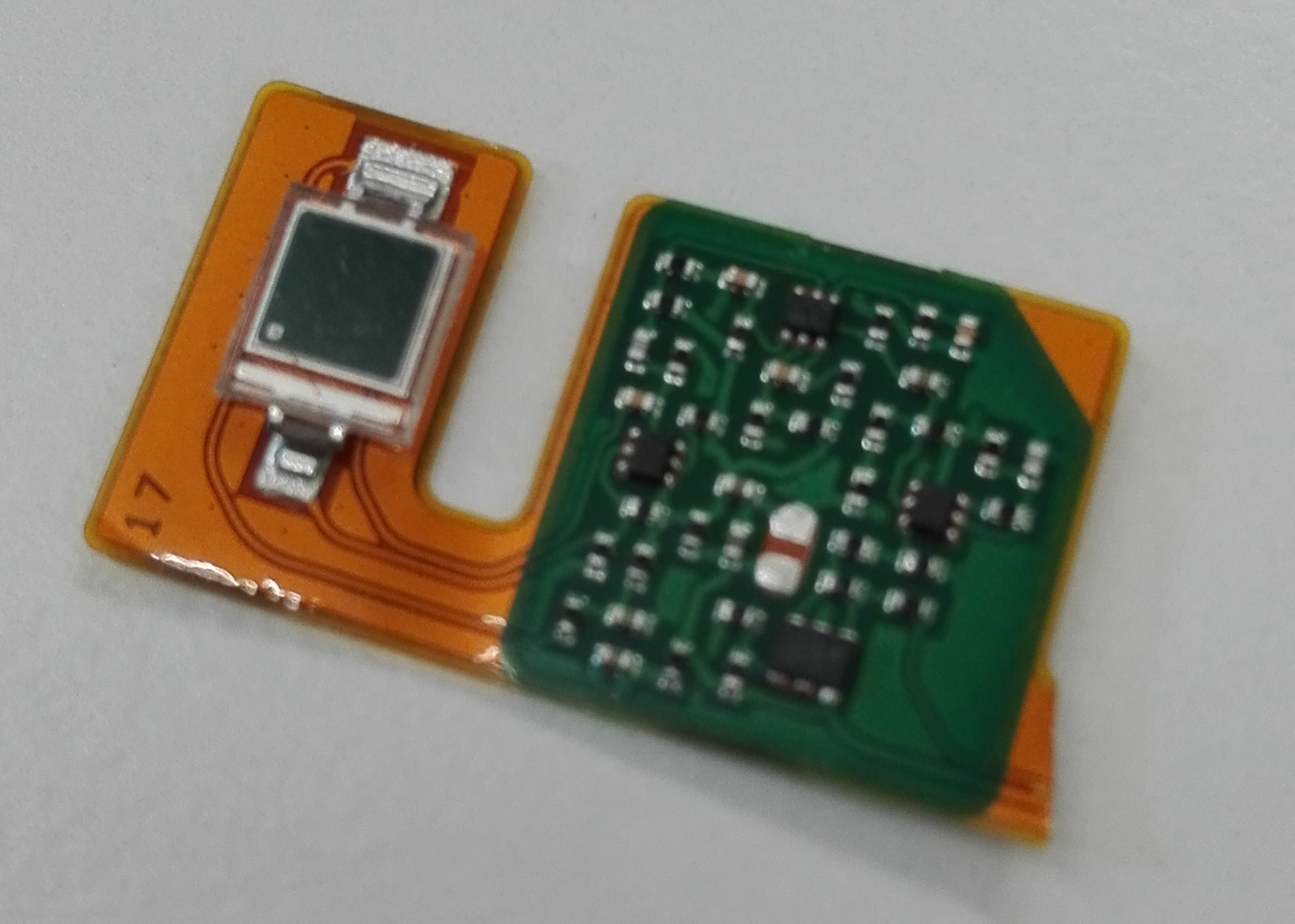 Then soldered VCC, GND and Signal copper cables (0.1 mm), using enough flux. And covert the sensor with a bit of glue to protect it from accidental damage. 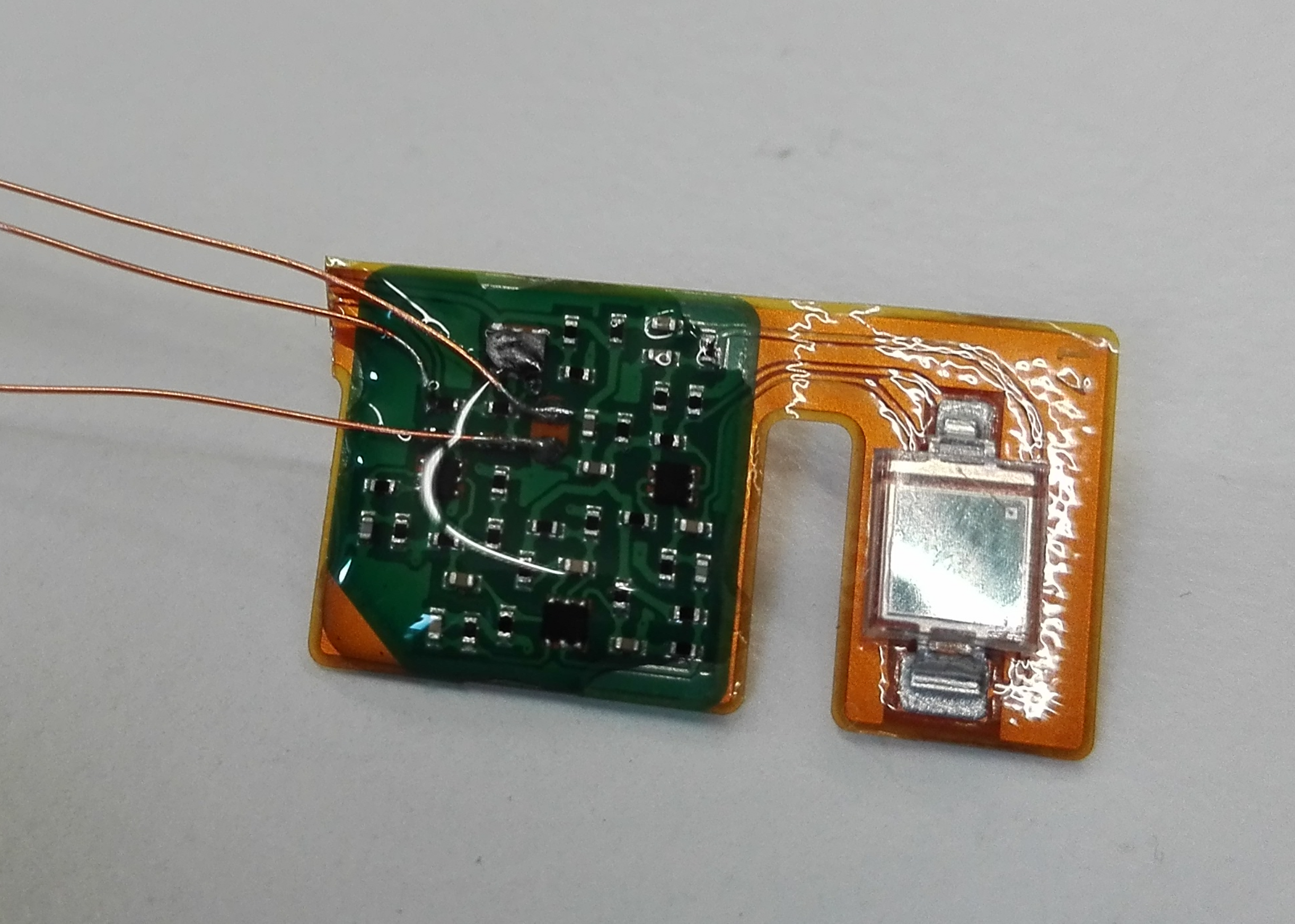 In the previous prototype we were routing all signal cables coming from the sensors in parallel. This turned out to be a bad idea. Because of induction the signals pollute each other. In the vive controller, they deal with it by isolating the signal with VCC and GND. So thats what we are also doing.

In the following picture you can see the complete setup:

[Note: This is the old setup. New updated setup is described in section 7.]

Notice that there are only 4 sensor signal cabels (grey, blue, yellow, red). The other cables are VCC (purple, orange) and GND (green, brown). The connection to the MKR is via SPI, where the MKR acts as the Master. An additional pin to the MKR notifies the MKR, when there is new data available. This triggers the SPI transfer. 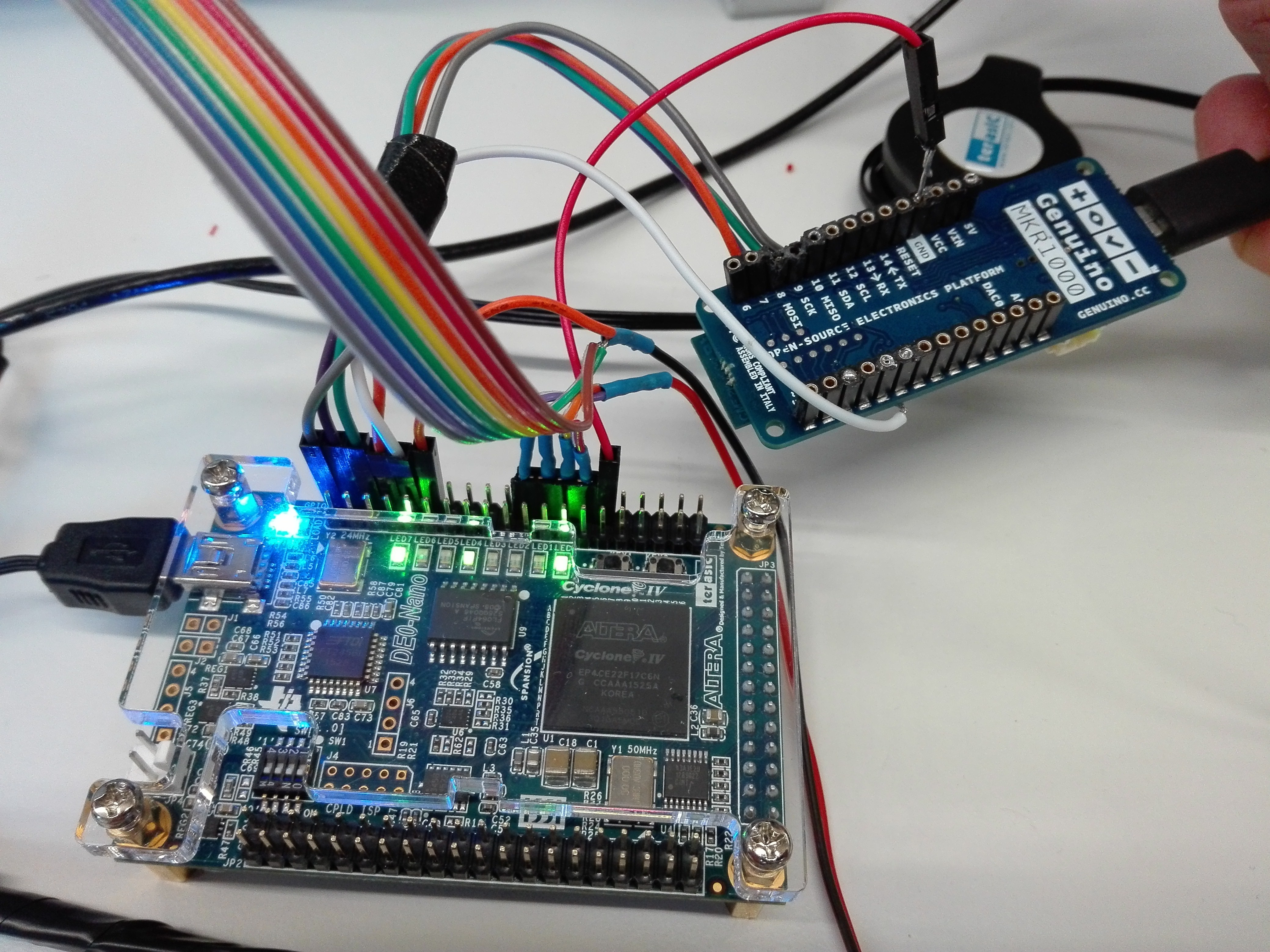 Our vive tracking consists of a couple of modules:

[Note: This is the old decoder. New updated decoder is described in section 7.] 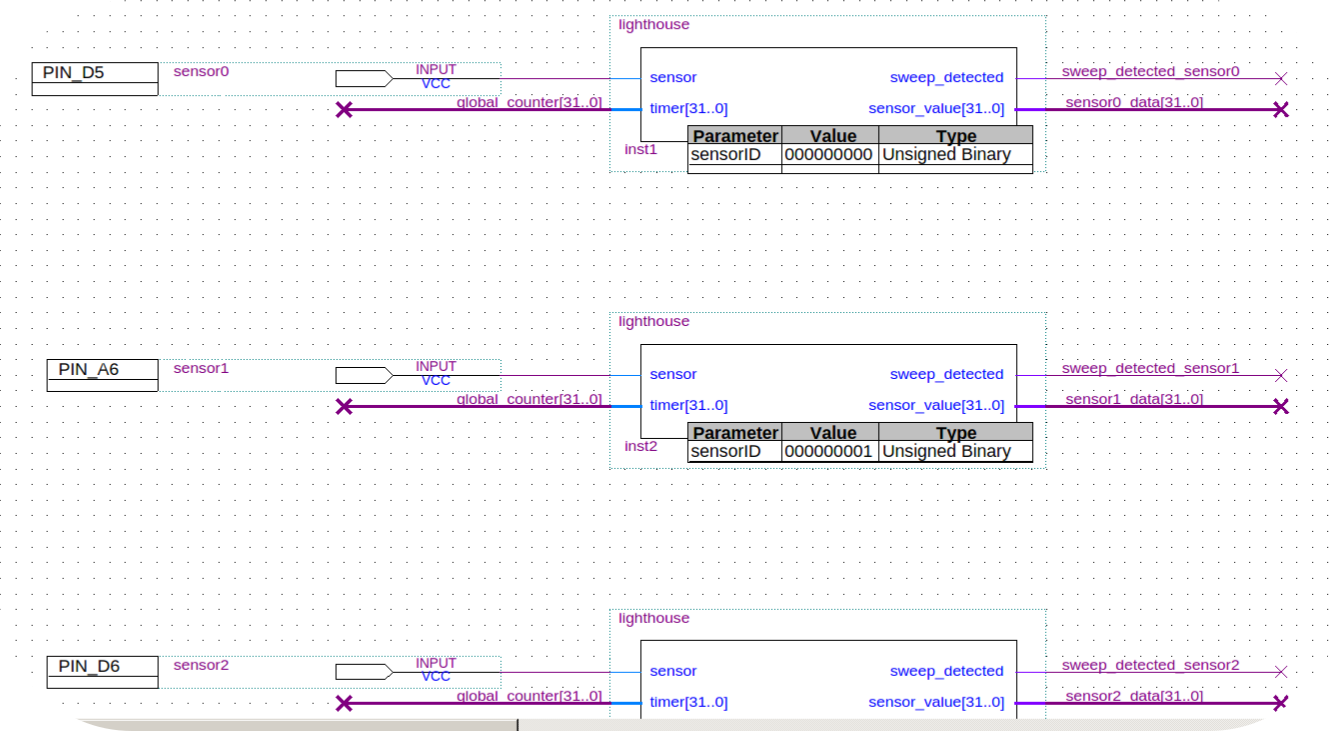 2. Transmitting the sensor signals via SPI

[Note: This is the old data format. New data format is described in section 7.]

The MKR acts a the SPI Master. Whenever there is new data available (ie when the fpga decoded a valid sweep), it notifies the MKR via an extra pin. The MKR then starts downloading a 32 bitfield, which encodes the data in the following way:

3. Transmitting the 32-bitfield via UDP

The host listens to UDP broadcast messages. We are using google protobuffer for the custom messages. When the host receives a trackedObjectConfig message, it opens sockets for the sensor and logging messages and sends the respective ports via a commandConfig message to the MKR. The MKR is waiting for this message and once received, starts sending the sensor values augmented with a milliseconds timestamp.

This sort of infrastructure is very convenient once you start using many tracked objects. You just turn the thing on and the tracking is initiated. We implemented a yaml reader, which saves and reads information about an object (eg the relative sensor locations on the object, or a mesh to be used with it...).

Have you gotten a chance to check out all of our libsurvive research on this?  Got a pretty stable sensor going with just an ESP8266 + TSV992 TIA, able to resolve frequency, phase, etc. really well with very few parts.  Sampling at 80 MHz on that $2 proc = sweet sweet accuracy.

ah sweet, haven't been checking on your project for quite a while now. I'm wondering now that you mention esp, whats the upper limit of lighthouse sensors you can use?

Knowing the difference between the Hanwei and Winsen gas sensors.
Project Owner Contributor

Hackaday Prize 2019
A seismograph capable of a sensitivity and an accuracy that are comparable to the ones found in professional tools.
Project Owner Contributor