Raman spectroscopy offers vibrational and rotational information about molecules, so it's a valuable tool for characterization.On top of that it's "easy" to build a Raman spectrometer. Well, easier than an IR spectrometer, which offer some of the same information - though with complementary selection rules.

The information presented here is a summary of my blog about constructing a Raman spectrometer: https://erossel.wordpress.com

It's still a project very much under construction, so don't go off and buy parts for the spectrometer unless you're willing to experiment.

Raman scattered radiation has an intensity of 10⁻⁷ compared to Raleigh scattered light and even less of the laser of course, so to avoid the CCD completely drowning in laser light, the two are kept separate.

The Raman excitation and collection is the usual back-scattering setup, and the schematic looks like this: 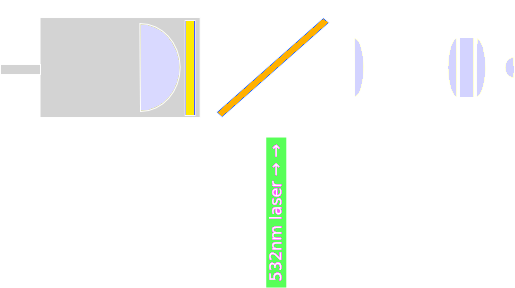 The laser is reflected off of the 540 nm dichroic long pass mirror. It's focused onto the sample by a microscope objective, which also serves to collect and collimate the scattered radiation. The long pass dichroic mirror and the 540 nm edge filter transmits the Stokes-shifted Raman radiation, while rejecting the Raleigh scattered light (and the anti-Stokes Raman signals). Finally the planoconvex lens focuses the Raman radiation onto an optic fiber going into the spectrograph.

The spectrograph consists of two off-axis parabolic mirrors (OAP) positioned so their tangential planes are normal to the grating's dispersion plane, and aligned so their off-axis focal points coincide. It's hard to illustrate in 2D, so the diagram is broken into several pieces:

I apologize for the poor illustrations.

The OAPs and the diffraction grating. The angle 2α is equal to the angular dispersion of the central rays.

The light enters the spectrograph from an optic fiber and is collimated by the first off-axis parabolic mirror (OAP1) and sent to the diffraction grating. It's not super-clear from the diagram that the two OAPs are stacked over each other. Mirror 1 is employed for convenience, while the "folding" action by mirror 2 and 3 facilitates precise focusing by adjusting the length of the path of the diffracted light.

Here's a simple 3D-diagram, rendered with openscad and meshlab:

And the .stl file if you want to have a closer look.

As the both the diffraction and the CCD are all (ideally at least) positioned in the exact focal points of the off-axis parabolic mirrors, there's no spherical abberation, and because of stuff I don't understand coma, astigmatism and field curvature is minimized. My guess is the abberations introduced by OAP1 is cancelled by OAP2, which requires the two OAPs to have a common focal point, making this design different from the classical Czerny-Turner spectrograph.

I apologize if this has been asked/answered but apart from the camera.... what was your parts cost?  Have you looked a graphene vs graphite using your instrument?  That would be a very nice spectrum pair to look at.  Thanks for sharing this.  Doug

It's not been completed. Life (very literally) got in the way. Graphene vs graphite sounds like fun, but I don't have any graphene lying around.

yes, life does go on!  I hope that what ever did get in your way was worthwhile and left you moving on to bigger and better projects, one way or the other :)

The long pass dichroic mirror will reflect most of the rayleigh-scattered light, but without the long pass (steep) edge filter I'm not sure the laser rejection is strong enough. This is the first part of my reasoning. The second is, that the commercial raman probes I've seen also use both, and I figure the professionals know what they're doing. If you can make it work without, I would love to hear about it, those filters are expensive.

Yea, the reason I asked is because of all the commercial Raman with that design. I wanted to know why the long pass edge filter is needed after the dichroic. After some more research I think that the dichroic mirror allows some Rayleigh scattering to pass through still. Thus, the use of the long pass filter afterwards. Thanks for the response.

Kevin, a high optical density filter (at least 4 or 5 OD) is essential because the Raman signal may only be 1 part in a million of the incident light.  A 45 degree filter that can do that would be awesome, but dichroic versions do not exist.  In reality all the imperfect filter does in the design is turn the laser beam through 90 degrees down the barrel objective and allows Raman light to travel straight through on the way back.  In other designs this has been done with a microscope slide with a dot of silver mirror on it and still others use a 50% mirror (which wastes half the laser light and half the Raman signal).  The 45 degree dichroic filter is better than these solutions because it wastes less laser light and blocks less Raman signal coming back, that is all.  The edge filter then does the real Job of making the Raman signal detectable.  If spectrometers were perfect we also wouldn't need an edge filter, but scattering can be around 1% even in a commercial unit.

Hello Esben,nice  project.  I will probably try out  the toshiba CCD chip,  with your schematics... check my video on youtube,, https://www.youtube.com/watch?v=QYhpttexAyM

I want to build one of these and I would like to see some data as well.

Esben, the suspense is killin' me man...do U have some data that we can see?

this past year my dayjob has been killing me. however the school year is coming to an end in 6 weeks time, so hopefully I will be able to complete the spectrometer some time before the end of summer. then I will have a spectrometer party and after that post some spectre..

After all this time I think U and UR students deserve a vacation :)

Sorry for my poor English,but i wish to ask you something.

Can this spectrometer be used as Hg (Mercury) detector ?

I need an Open-source portable device to detect mercury in close and open environments.

The commercial solutions are way far from my wallet,so for this reason im seeking for this kind of Open-source device .

The answer is: That depends..

When you say mercury, do you mean elemental mercury ie. Hg, or are you looking for Hg²⁺. I'm guessing that elemental mercury would be hard to detect (but I'm not sure). There are examples of Hg²⁺-detection using SERS in recent literature.