I wanted a small bench power supply I could pick up and setup anywhere in the house or garage or chuck in a rucksack, for small, low power projects.

I also wanted to use up my ever growing stockpile of components and I wanted it to be linear and have fine adjustment and current limiting.

There is an obvious problem with a linear supply - they tend to be bulky and not very efficient and most require a heat sink for the pass transistor to dump heat into. I could deal with the inefficiency but trying to find a way of dissipating the heat in the pass transistor, without using a bulky heat sink.

What I wanted out of this supply:

This is my first Power supply based project the other day and thought I'd start with a modest one. Here's how it came out: 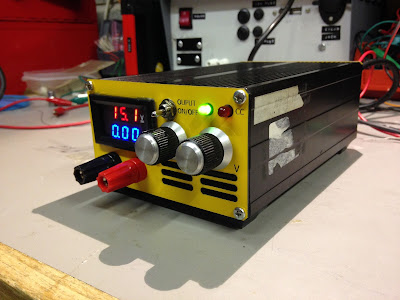 Now there are loads of designs out there, so picking is as easy as punching the right terms into google. The most popular of which seemed to be Dave Jones +EEVblog based design, which is based round an LT3080.

Not having one of those in my box I decided to base it on an op-amp and pass transistor instead. So you could say a less polished version of the EEVBlog design.

After a rummage round my parts bin I found a 18V 20VA transformer which would be perfect to power my design. I needed an enclosure and the enclosure I was going to use for my Load project seemed to tick all the boxes: light, small, robust and the transformer fit inside! So that put 2 high value components off the shopping list!

Then looking at the enclosure, the answer was staring me in the bleedin' face! I know working out the case thermal resistance was going to be a brain ache, so I didn't bother! Its a big chunk of metal with a large-ish surface area on the top! I just went with my gut - admittedly that's really not what your supposed to do, but if it didn't work then I was confident I could figure something out!

Other parts: well there are always resistors and caps, but I need a quad packed op-amp: LM324 - yep got one of those! Also a good power supply is based on a decent voltage reference. I didn't want to use a Zener as a reference as their temp coe. and initial accuracy can be poor and after some careful sorting of my parts I found a couple of AD680's. Very nice! Good temp coe. and initial accuracy!

The temperature in my garage can range from bloody freezing to quite comfortable in the space of a day and I'd rather not have my output be dictated by the weather!

As with all designs, you first get some testing done. Using SIMETRIX I started testing some designs and observing their performance.

My main hurdle was figuring out why my output voltage was so noisy. Then it became apparent I'd not thought about how my voltage feedback was working. Originally the feedback to my voltage error amp (X2) came directly from the output of the supply. When running the simulation and observing the output I first thought that I needed some filtering in my voltage feedback (C3) as from the response I got:

But after looking at the design I was basing mine on, it was clear what I had done wrong! So corrected the feedback and removed C3. I then found that the output became much more stable!

Further simulation also showed that my output needed some regulation current at low voltages and some damping in the voltage amp feedback. Below is a revision of schematic version 5 (above) with the constant current source I1 set to step through different values of regulation current (0-10mA) and C3 is now a 47uF cap connected to the non-inverting input of X4:

Firstly I wanted to see how the output voltage responded to different regulation currents. So I firstly I ran a transient simulation without C3 and set the source V4 (my reference) so that I would get approximately 1V output, and obtained the following: 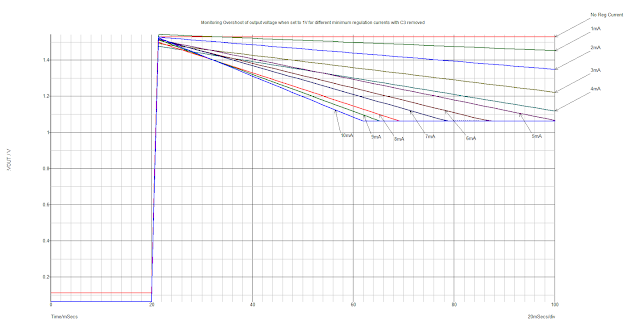